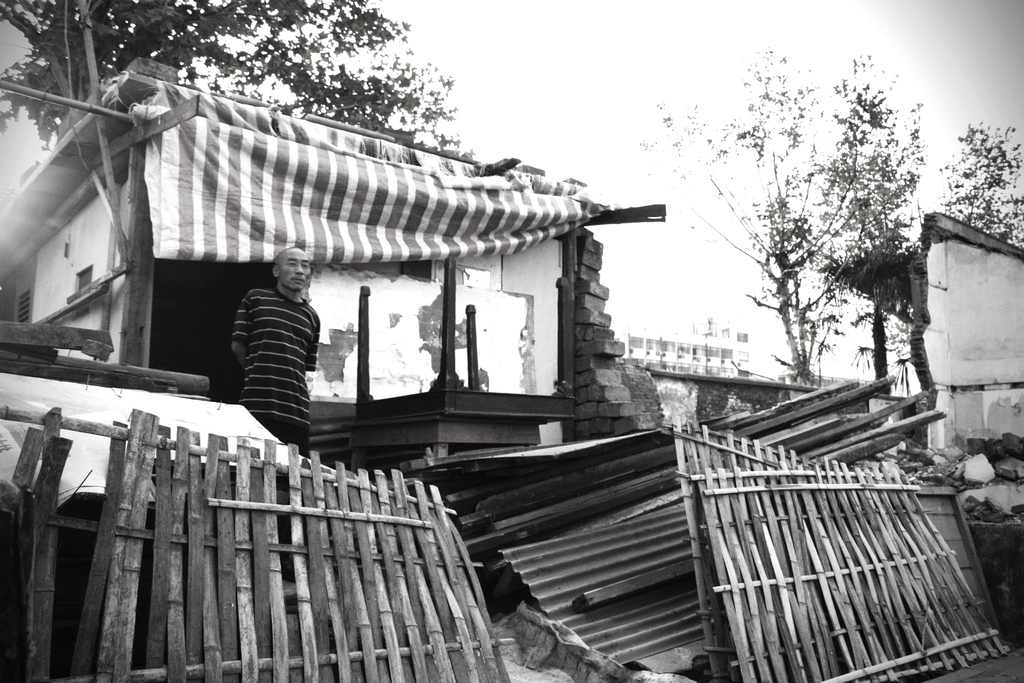 He was sitting on his makeshift porch, mending his bicycle when I approached him. He stood up warily and it was then I realized that he only came up to about my height. For a grown man, he was very short. Not quite midget sized, but he seemed squat, short-limbed and without a visible neck.

I learned later that he was from Anhui, a neighboring poor province, and was actually part of the demolition crew rather than an original resident. Only, he lived by himself rather than with the other workers in the nearby dormitory.

On closer inspection, I realized that he had built his own house entirely from surrounding scrap. Pieces of loose brick created walls, zinc plates and tarp served sturdily as a roof and basic furniture was sourced from abandoned trash.

He had even fashioned fences to enhance his residence, a luxury only available to landed property. Amusingly, the finishing touch was a main “gate” – a loose bamboo fence centerpiece he used to barricade his borrowed property when he left the house.

Not necessarily burglar-proof, but it was his little kingdom on what one would consider prime property in Shanghai. Standing but two blocks behind this shack was a tall, black and sleek condominium, facing Pudong’s maniacal skyline. These apartments started at RMB 1 -2 million (USD 150-293k) a unit.

When he spoke, spittle would fly and unfortunately end up in my face. Still, he was eager to rant and rave about everything under the sun: inequality of the masses, the government, the weather and even the stray cats.

The sun was setting and I was too emotionally exhausted to listen any more. I braved a smile, swept his saliva off my face and waved him goodbye and good luck with his house and cats.

They watched with a deceptive air of insouciance that masked a deeper, almost territorial, wariness. Stray cats, in various hues of black, brown and ginger, rested lazily on…