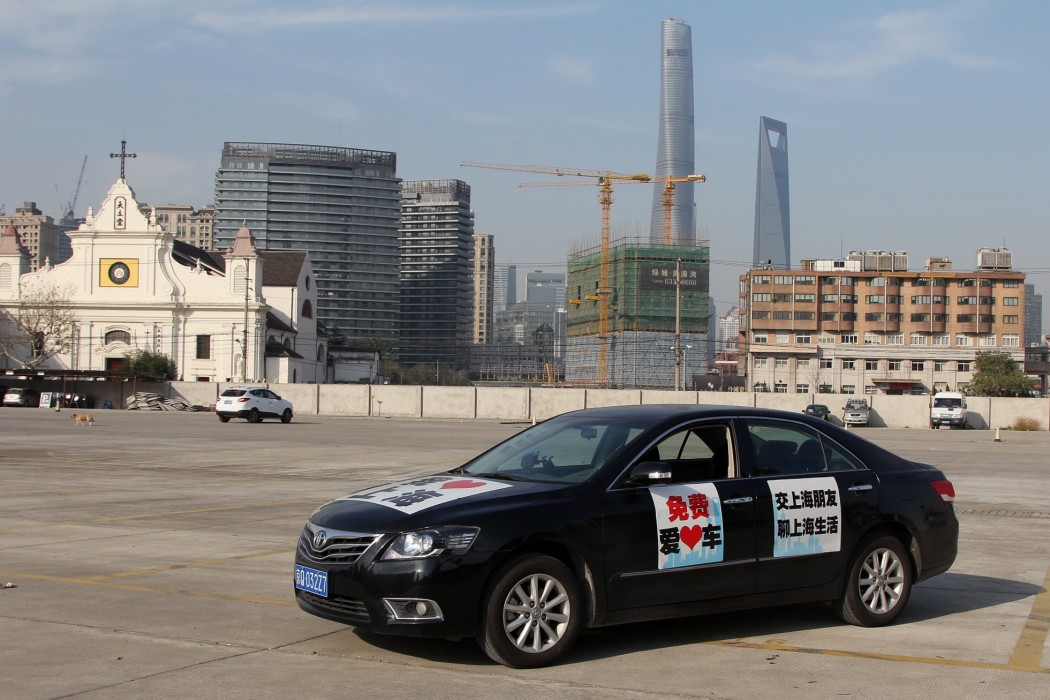 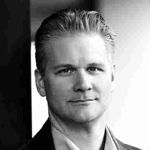 Frank Langfitt is the Shanghai Correspondent for US’s National Public Radio (NPR), and his stories can be heard on Morning Edition and All Things Considered. Langfitt is no novice to China, previously reporting for The Baltimore Sun for five years based out of Beijing, and covering the 2008 Beijing Olympics for NPR’s news team, which won an Edward R. Murrow Award for sports reporting. Before China, Langfitt was NPR’s East Africa correspondent based in Nairobi and covered Sudan and Somalia’s civil war. During the Arab spring, he covered the  uprising and reform movement in Bahrain. Langfitt’s stories have ranged from heartwarming to penetrating, always putting people’s personal stories front and centre. Always creative, he told me about his idea of offering free cab rides around the city as a way to get to know the changing lives of Chinese people. He called the installment, Streets of Shanghai, a wonderful spectrum of insights into the people who make up Shanghai.

[Cover photo: “My assistant, Yang Zhou, had these signs made to advertise my free rides. My wife, Julie, came up with the idea for magnetic signs,” says Langfitt.]

SAT: First, thank you for not naming your awesome project “Shanghai Street Stories”! Where did the idea of driving a car to offer free rides to people come from?

FL: I love your blog name and wish I’d thought of it first, but you were way ahead. The idea? Before I became a reporter, I was a cabbie in Philadelphia. It was great training for an aspiring journalist. I learned more about the city and its people by chatting with my passengers than I had in all the previous time I’d lived there. Sometimes, the cab became a sort of rolling confessional. I remember picking up a woman one night as she was leaving her husband. As I drove, she told me all about the relationship and why it failed. I drove into some of city’s toughest neighborhoods where my passengers – often lovely, church-going folk – had no choice but to live.

SAT: How many “passengers” have you had since you started? Can you give us a sense of the diversity of backgrounds and personalities?

FL: Close to 30 passengers so far, but expect to have lots more. (I had to spend most of the fall in Hong Kong for the protests, leaving almost no time for driving.) The great thing about driving in Shanghai is the diversity of the people you meet. One day when it was raining – prime time for my free cab service – I picked up a British-educated, female business manager of a Ferrari dealership. That same evening, I attended a house church service of another guy I met through the cab. During the sermon, the preacher railed against materialism. Among his examples: buying a Ferrari. 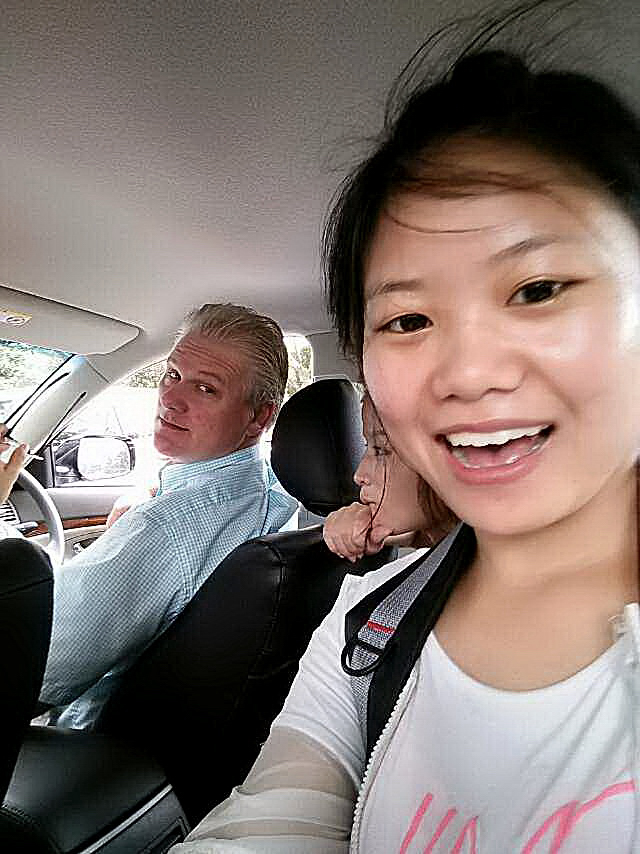 Langfitt: “I drove these two Suzhou textile workers to the Pearl Tower in Lujiazui. They insisted on giving me a souvenir pocket watch and taking this selfie.”

SAT: Have any of your passengers defied any initial expectations you may have had before you started? I mean, you’ve worked in China for many years and met all sorts of characters. Did any of your interviewees surprise you or have their stories reinforced your previous notions?

FL: I’m constantly surprised, which is what makes the work so fun. I guess I’m beginning to appreciate how much I still don’t know. Here’s an example. The guy who invited me to the house church is a pajama salesman, who has sent his family to Los Angeles. He’d saved up enough money through government compensation from having his home in Shanghai knocked down to settle his family in the States. He is of very modest means, but he sent them there because the pressure from the education system here was crushing his daughter’s spirit and damaging her eyesight. Also, he wanted to have a second child. I’d done stories on millionaires emigrating, but I didn’t realize that even a pajama salesman had an exit strategy to get out of China.

SAT: Do you feel that as a stranger, your passengers tend to let down their guard more and go as far as to project their hopes or insecurities in a way they wouldn’t with their friends? Do they confess thoughts that even they are surprised to reveal.

FL: The cab is an ice-breaker. It gets the conversation rolling because the passengers have so many questions about it. Then, as you know, Chinese like to compare life here with the West, so if they have a problem, they will ask, “Hey, how do deal with this in America?” 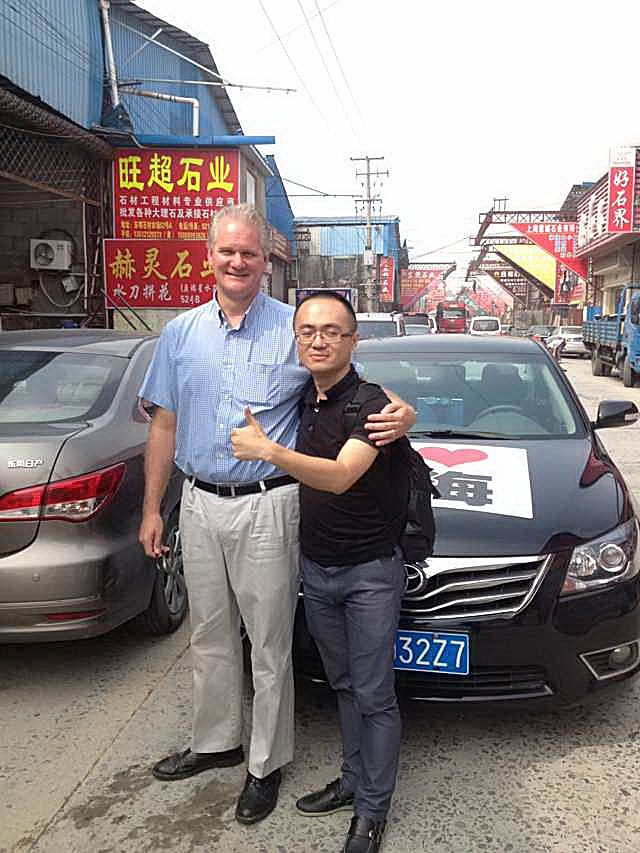 Langfitt: “I drove this biotech worker to a self-help conference in Pudong. I forgot he had luggage in my trunk and almost drove off with it.”

SAT: Indeed, locals are always very curious about life outside of China, especially the material aspect. What are the common questions your passengers like to ask, and how do you respond with a comparison of American life?

FL: Some people ask how much money I make, a question I duck. They always ask about family and seem surprised that a) I live with my family here in Shanghai and; b) I’m not married to a Chinese woman. They also ask whether foreign journalists are censored by the Chinese government. I explain they aren’t, but that the government can and does apply pressure to reporters whose work it doesn’t like. I sometimes get questions about how Americans handle generational differences.

Last summer, I had coffee with a young female passenger and her mother, with whom she lived. After 20 minutes, they both started crying because of the pressure the daughter felt having to take care of her parents while she was also trying to build a career here in finance and find a husband. The mother, who was from another province, was lonely and wanted more time with her daughter. The daughter felt she owed her parents because they had “invested” so much in her, paying for college and her MBA. The daughter wanted to know how Americans dealt with this dynamic. I explained, as delicately as I could, that we generally didn’t live with our parents beyond age 18. 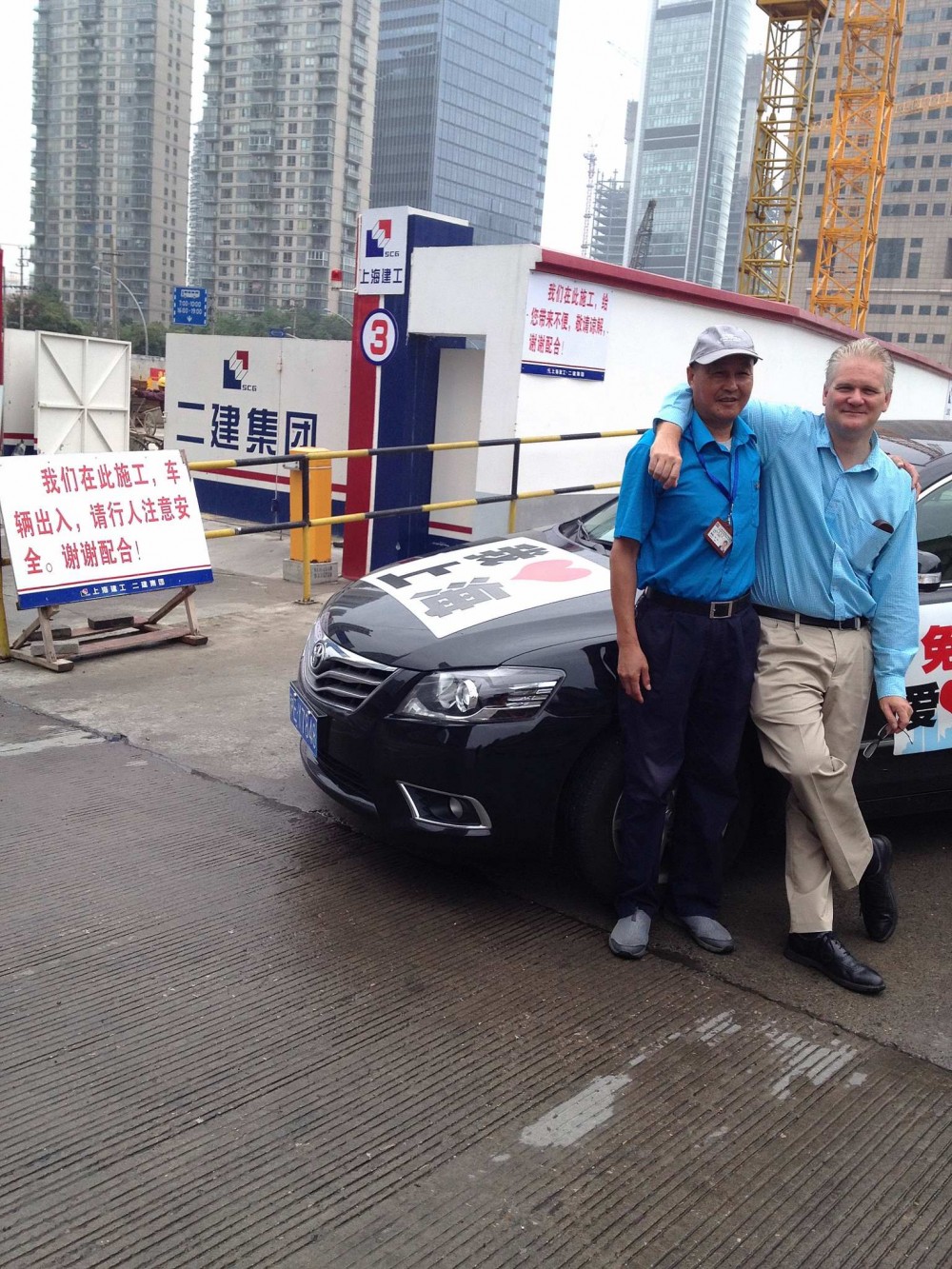 Langfitt: “Sometimes I like to just park at ferry stops and see who I meet when they come off the ferry. Here I am posing with a ferry worker. Lots of people I drive ask to take selfies.”

SAT: Okay, important technical question. Driving can get pretty aggressive in Shanghai. How do you balance conversing with your passengers, maneuvering traffic and GPS?

FL: I use a GPS and an internet-connected iPad with maps because navigating the city can be so difficult. In the beginning, it once took me 20 minutes to find the entrance to a tunnel. The only thing I had going for me is the ride was free so the passenger’s expectations were appropriately low. I try to talk, drive and pay close attention at the same time, because I don’t want to do a radio story on how I got into an accident – though I’m sure that would be entertaining for the audience. Also, the ride is just the first step in the story. In all my stories so far, I’ve actually been invited into people’s homes and – to some extent – their lives, so I can really get to know them. 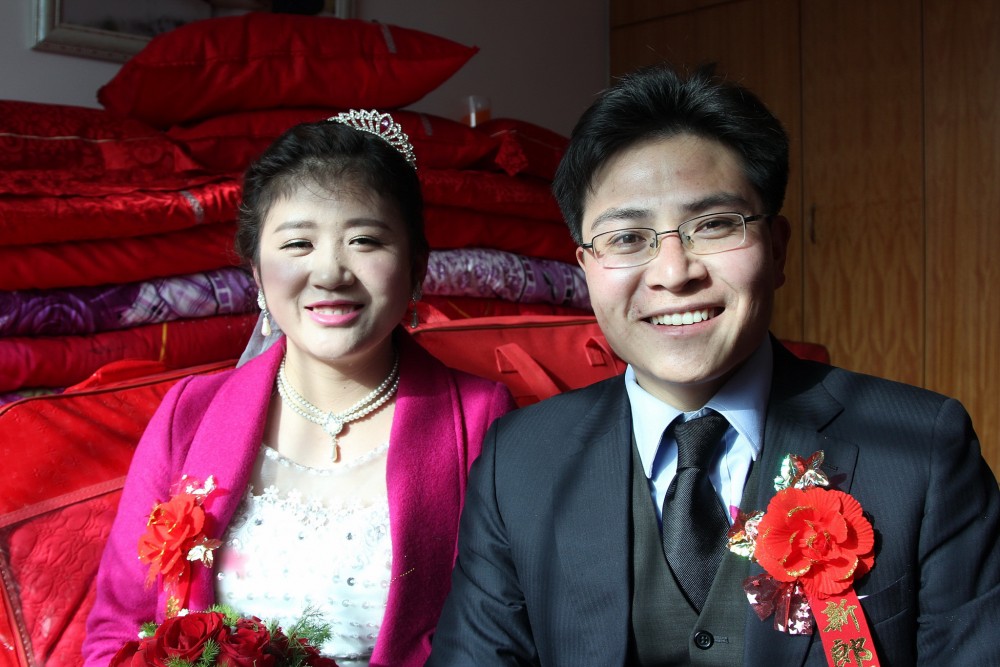 Langfitt: “One of my passengers, Charles, met his wife, Xiao Fang, two years ago over Chinese New Year. They were living at their parents’ homes six miles from each other in Hubei. One night, they shook their phones at the same time and connected on WeChat.”

SAT: So the cab has led you to so much more beyond a ride, including chauffeuring a couple all the way to Hubei for their wedding. That must have been quite epic. Tell us more about it.

FL: It was fascinating. The NPR Assistant, Yang Zhuo, put out an ad on Weibo saying we were offering a free ride home for Chinese New Year. We found two guys – who didn’t know each other – but were going to the same part of Hubei to get married. I drove them and one of their fiancés 14 hours back home, chatting and singing along the way. After we arrived, I shuttled the couples around town to pick up their wedding licenses, drove family members and guests to the weddings and almost drove my rented Buick van into a rice paddy – but that’s another story.

The whole set up was incongruous and a bit comic, because I’m a middle-aged American with gray hair and I’m driving around a village where a foreigner has never set foot, let alone served as a chauffeur. People were amused, but quickly accepting and very friendly.

The men’s stories were really illuminating. One guy, Rocky, had risen from a poor farming village to become a lawyer in Shanghai. The force behind that great leap was his tenacious mom, Guo, who’d suffered during the Cultural Revolution, but bounced back to run businesses and raise enough cash to educate her son. The other passenger, Charles, met his wife one night a couple of years back when they simultaneously shook their cell phones and connected on WeChat. It’s a story they haven’t even told their parents. In total, I spent eight days with the couples and their families, so I had a chance to get to know them and hopefully do some justice to their stories. 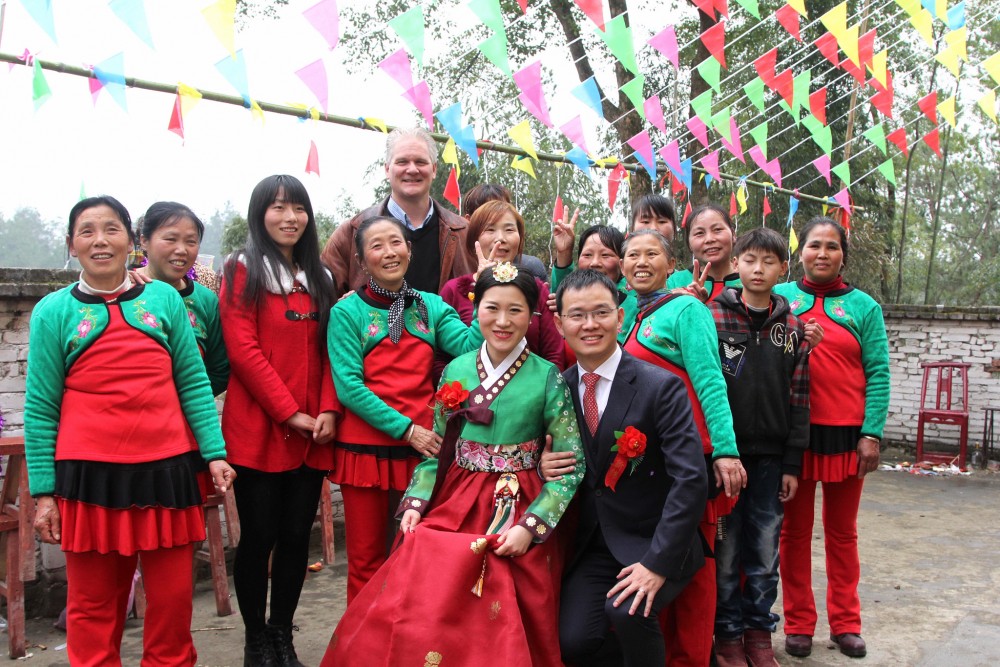 Langfitt: “After the wedding, I pose with Xiao Piao, Rocky and his dancing aunties in the courtyard of his family home in a remote village in Hubei. The drive took 14 hours. I drove slowly, because I was afraid of getting into an accident.” 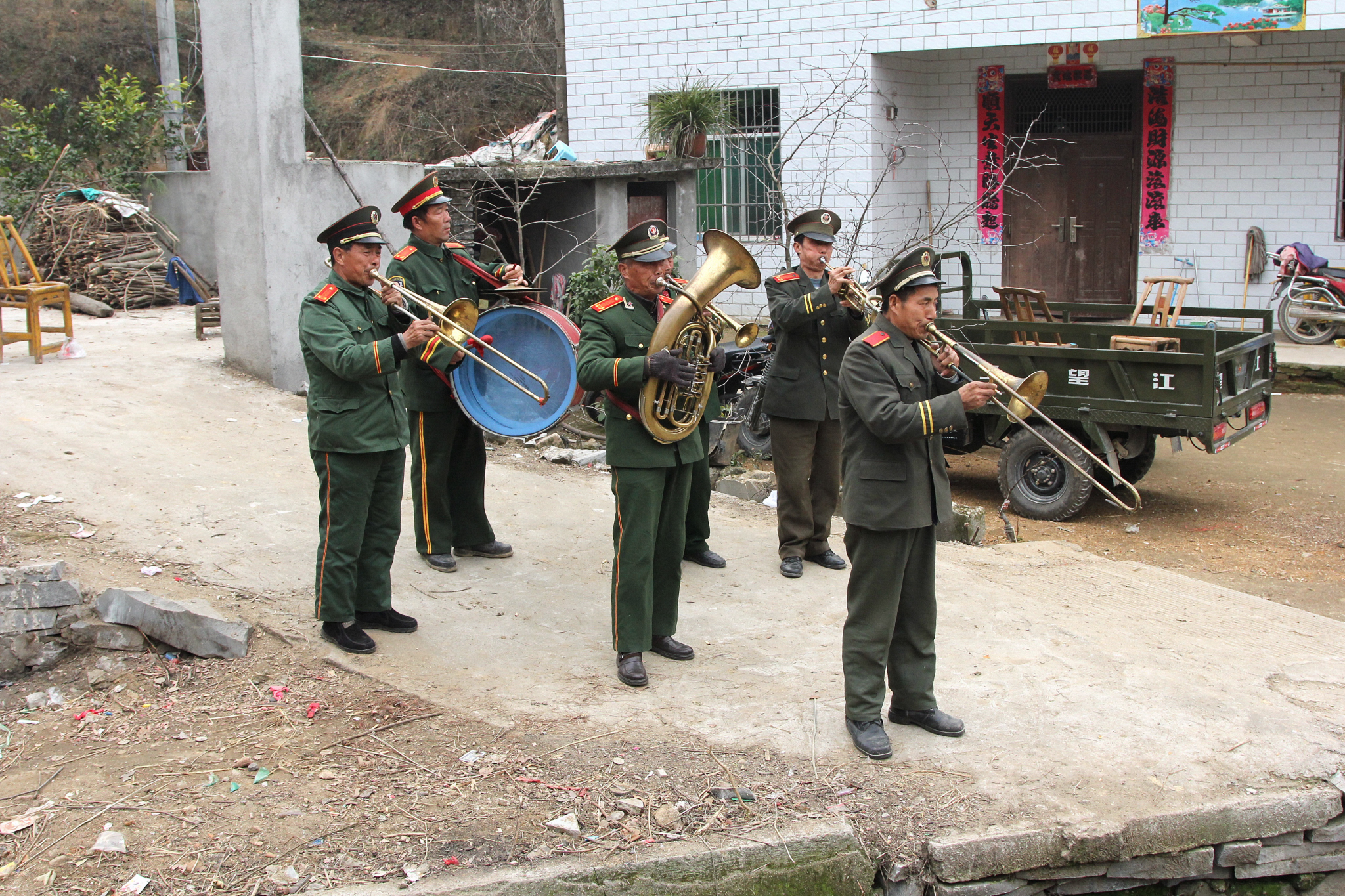 Langfitt: “A band made up of farmers wearing People’s Liberation Army uniforms greeted Rocky and Xiao Piao after they arrived in the village for their wedding in a black BMW. I drove guests in my rented Buick van.”

SAT: You said that driving a cab helps you to really learn about the city. What did you learn about Shanghai as a city from your taxi experience?

FL: I’m still learning, slowly. The city is staggeringly diverse and no one really seems to have a grasp on it, because it sprawls and most of us lead highly circumscribed lives here. To put it in perspective for Americans, Shanghai is larger than the state of Delaware and smaller than Connecticut with a population about the size of Australia’s. I’ve taken passengers to parts of the city I never knew existed, sometimes finding myself near the edge of the East China Sea. Without GPS, it would have taken me forever to find my way home.

The city is also filled with contrast, sometimes block by block. In my neighborhood alone, you can walk from a gated community with Rolls Royces and Lambroghinis and cross the street to a working class neighborhood of people from the provinces who have no right to educate their kids here in the city. All this makes for lively conversations with passengers, who may see Shanghai from completely different perspectives. In short, it’s a great place to drive a free cab and collect stories.

So you see, I found them. In a spur of the moment, I had followed two faceless young girls into the alleys and it wasn’t too long before…