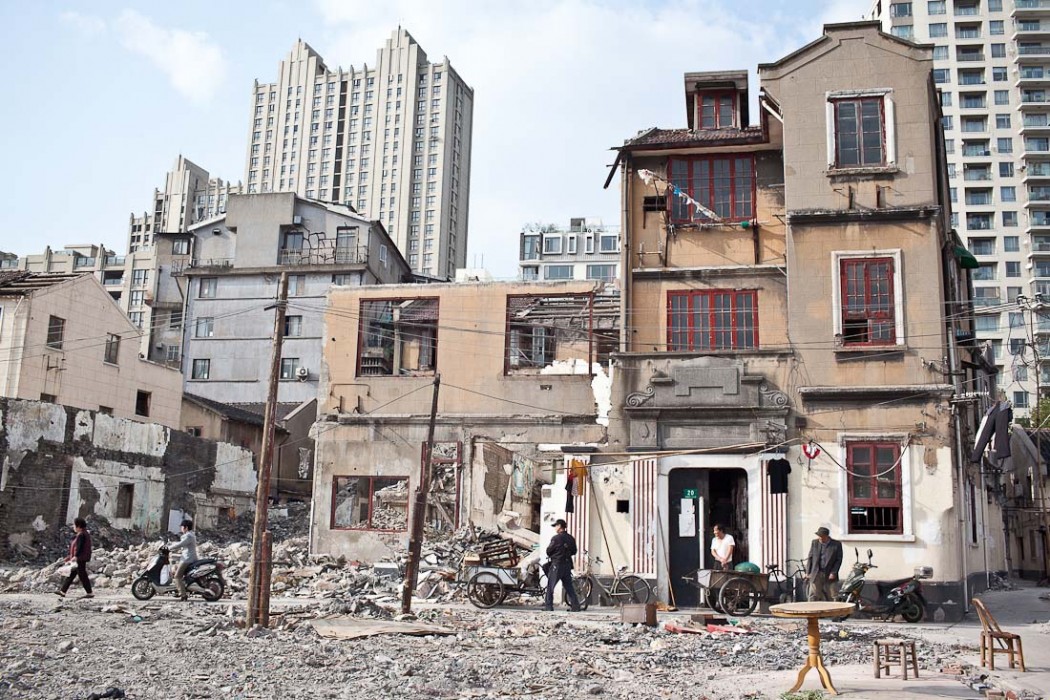 Clutching my wrist tightly, she spoke with a heavy, sour breath, “You have to come back tomorrow with the photos,” and leaned closer to make her point, “We won’t be around within the week.”

I eased my hand from her tight clutch, feeling the blood rush back to my digits, and nodded.

“Can I go back to photographing now?” I asked weakly.

Quickly losing interest, she ducked into her crumbling provision shop and left me and my tripod in the desolate dust land that was now Xinping Lane (星平里).

The lilong neighborhoods south of Fuxing Lu (复兴路) are currently in the process of being demolished to accommodate the ongoing expansion of high-end retail and office spaces emanating from the commercially successful Xintiandi (新天地). Block after block, from Jinan Lu (济南路) to Shunchang Lu (顺畅路) and now Hefei Lu (合肥路), houses were being vacated, bricked up and then torn down.

Nearby, the local dongqian (动迁) office that managed compensation negotiations with local residents flashed a successful sign that over 98% of the residents had agreed to appropriate compensation levels and alternative housing in the suburbs of Pudong (浦东) and Jiading (嘉定).

Still, there were the occasional lone structures scattered across the flattened neighborhoods, nail houses (钉子户) such as this diaper store, occupied by unwavering residents, resolute in securing more justice and more money (the former led to the latter). Others were inhabited by workers of the demolition company and migrant workers facilitating the scrap trade of wood, glass and brick from the debris. 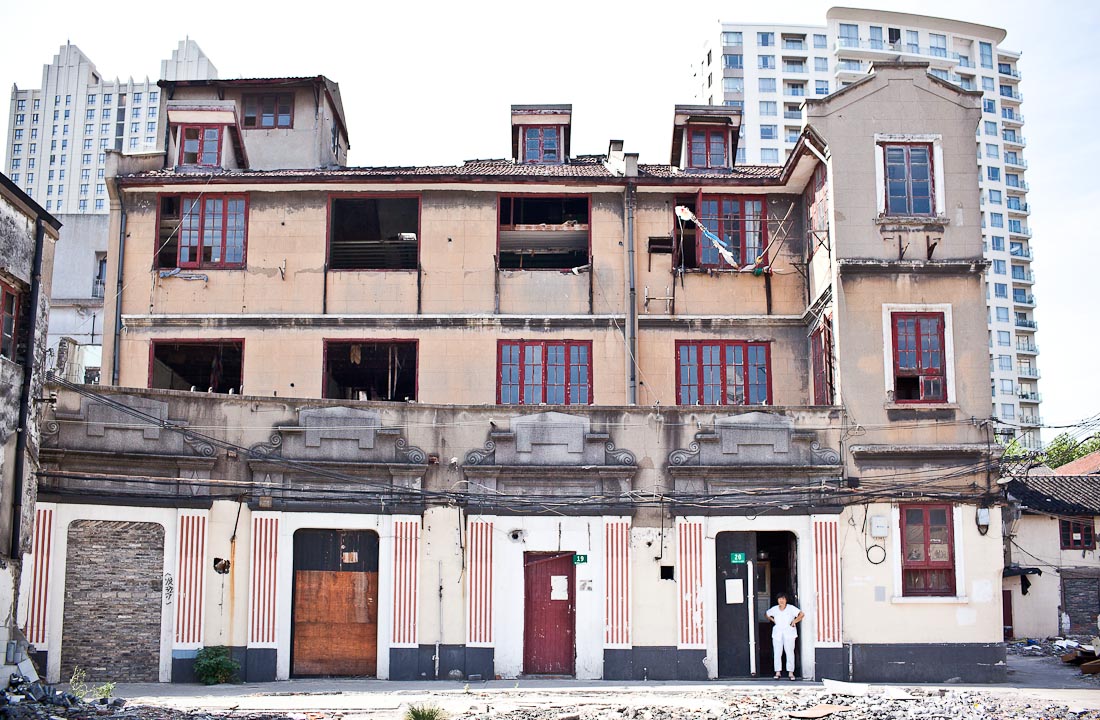 Xinping Lane, like many neighborhoods surrounding Xintiandi, the location of the First National Congress of the Chinese Communist Party (CCP) in June 1921, housed memorable Chinese personalities in Shanghai’s colorful and often scandal-ridden past. As part of the then-French Concession, mainly wealthy and influential Chinese could afford entire homes in the district. They included businessmen and local politicians – Republicans and later Communists party members, movie and literary celebrities, concubines and even the occasional mafia (who also ran vices that ate away at the moral fiber of society). The social status of residents was denoted by their elaborate shikumen designs and height of their imposing entrances. Residents I have met rattled off names of mafia members and bankers in a breathless string, some important enough to warrant a few lines of information found on the internet, others lost in translation.

“Like it or not, these capitalist families were part of the city’s history, now they are all but scattered in the wind.” One resident told me while washing vegetables in the alley sink. At 60 years old, his ancestors had bought their shikumen home when it was first built in the early 1930s with gold bars, “This big,” he gestured with his cabbage. 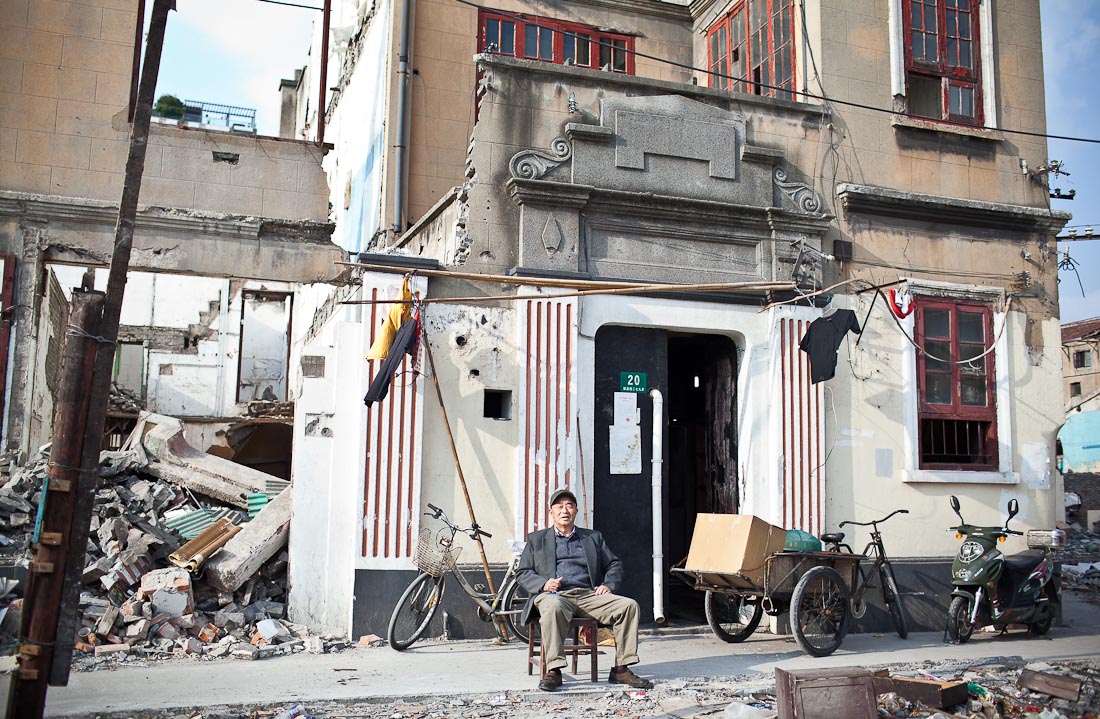 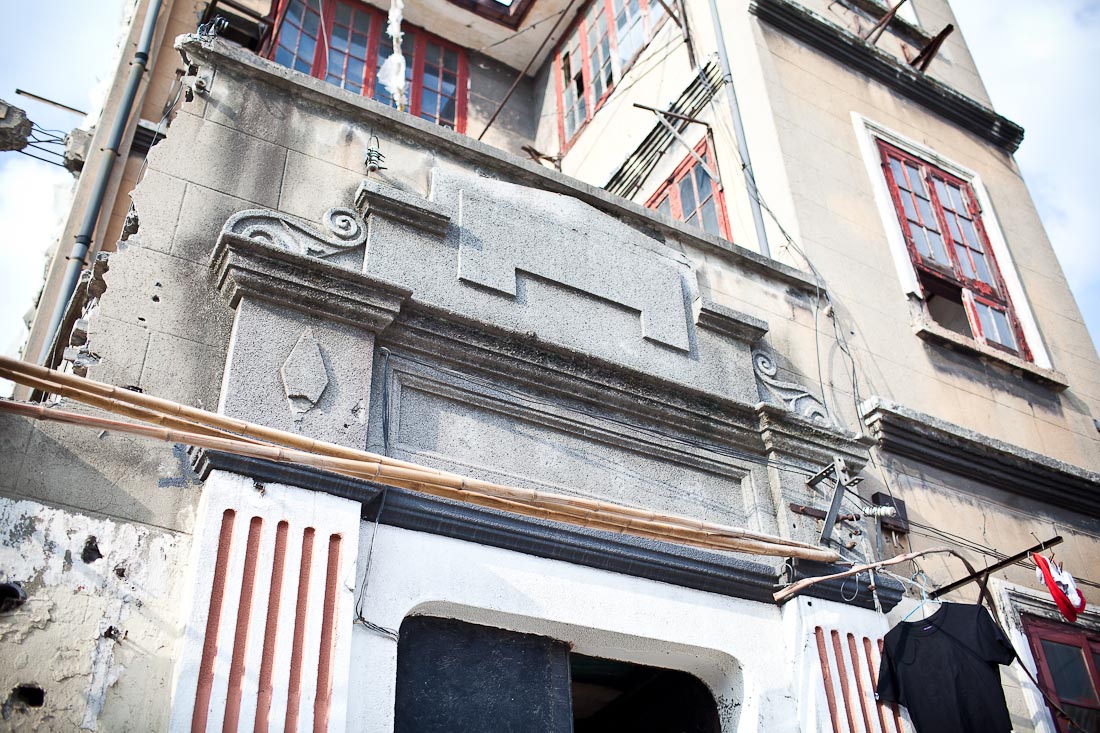 When the middle section of Xinping Lane was hollowed out by excavators, it left a clear view of a row of shikumen with small swirls of Dutch gables that encased both sides of the shikumen header and brightly painted columns in red and white stripes like a fun house in an amusement park.

Over the course of two weekends, a family moved out their things from a house whose interior was in a most dire state. At one point, I poked my head in and was slapped back by a strong stench that made my eyes water. Sewage? Coagulated cooking oil? Mold? I tried hard to hide my gagging reflex when they invited me in for tea.

I began shooting a few portraits prior to the last shikumen of this particular row was demolished. Most demurred out of shyness or suspicion. Others got into the spirit of things when I gave them free reign of the camera fixed on a tripod to photograph me instead.

The middle-aged woman who ran the adjacent provision shop insisted I deliver the photos the next day. The building was on its last legs. 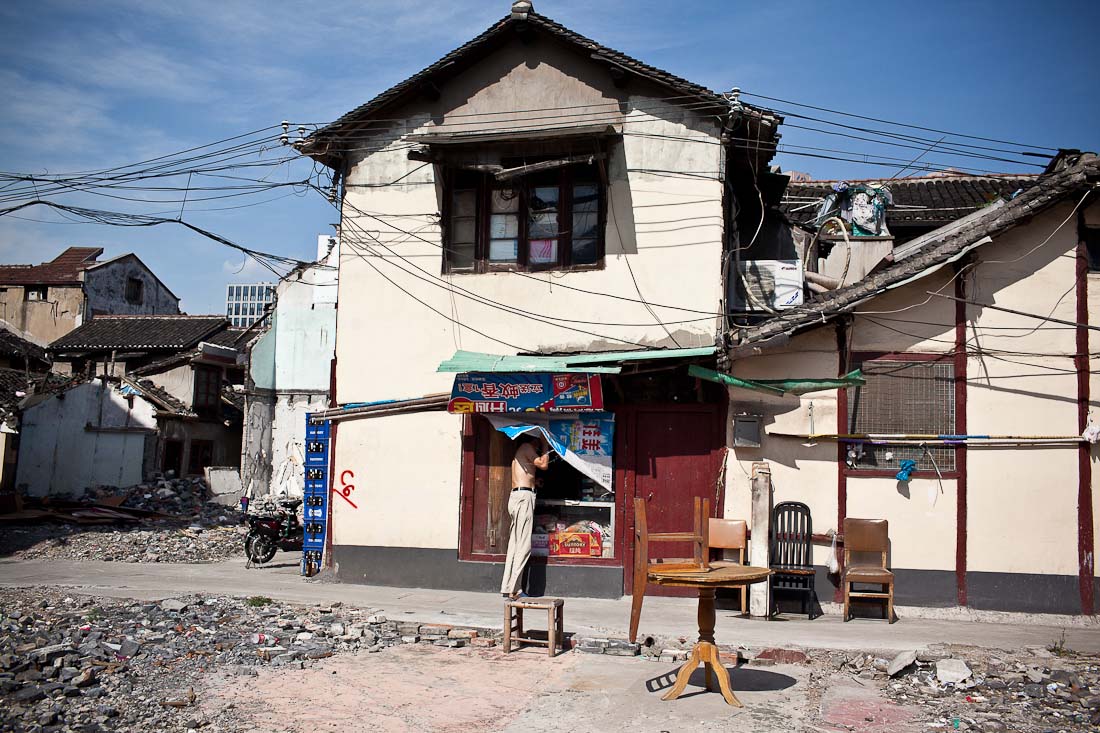 And so, the next day, dressed in a business suit and heels, I arrived at the entrance of Xinping Lane with the portraits in hand. Bulldozing was in full swing. As I hopped from rubble patch to patch, the floor vibrated from the thunderous weight of the excavator tracks atop a pile of ripped up walls.

The whole time, nobody said anything to me, that it was unsafe without a construction helmet or that I needed to leave. Why would they? Migrant workers milled around and nail houses remained stubbornly in place.

After the deed was done, I watched with my fingers in my ears as the excavator’s arm tore through the facade of the shikumen, ripping the gables from pediment from the columns to … nothing.

A month later I returned. The provision store was gone, so was the row of red and white shikumen. And in its place was a stack of wooden planks on a smooth floor, as if nothing had existed before.

A cleaner on a scooter passed by and upon recognizing me, waved. “They’ve moved to a rental nearby while they wait for their new house in Pudong to be built.” She grinned fiercely, “They’re tearing down the next alley, you better hurry on over.”

* Xinping Lane was one of the featured shikumen housing that I had singled out as part of a review of housing demolished in Shanghai in 2013. 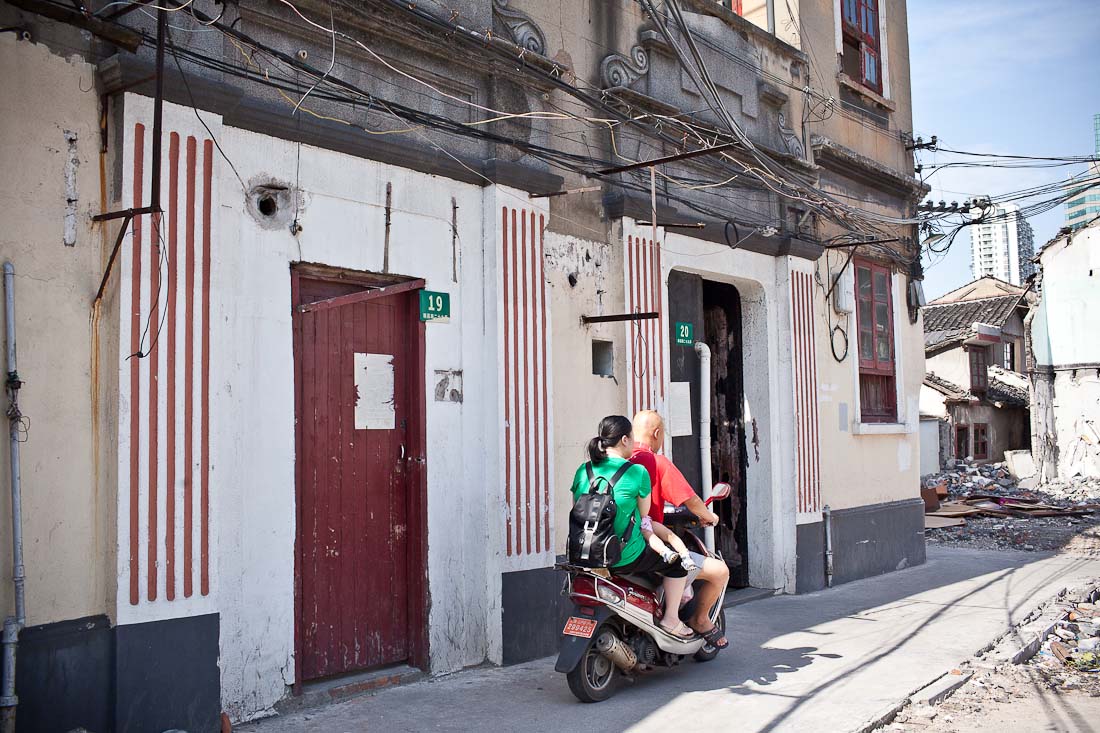 12 o’clock. The heat from the asphalt emanated with a kind of fury that dulled the senses and eventually the body. I tasted the salty perspiration on my…