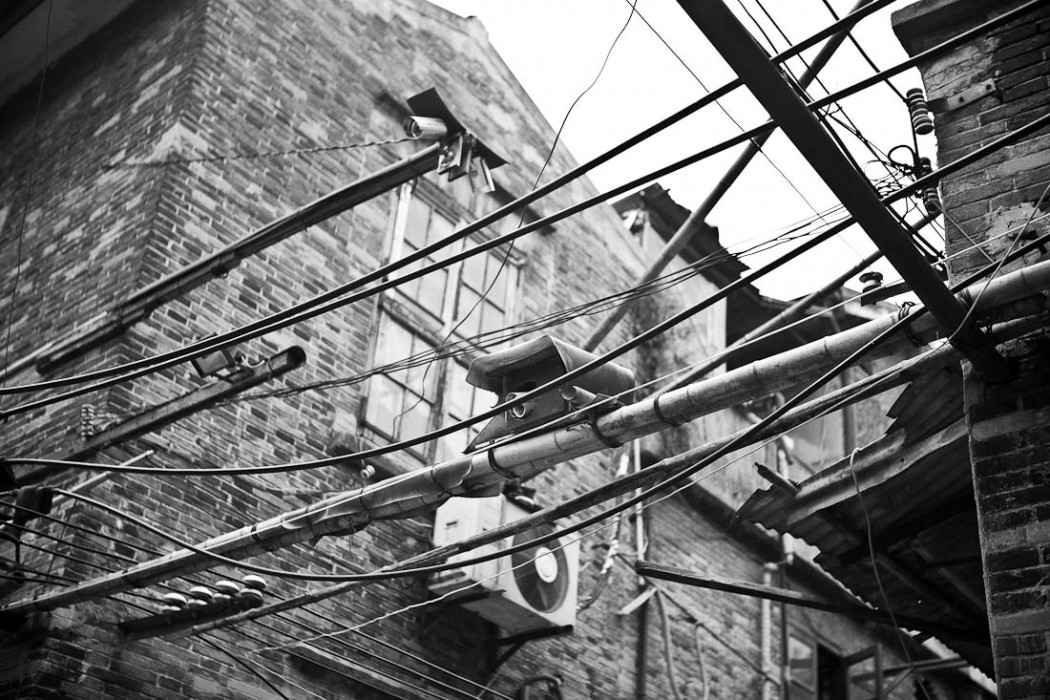 They watched with a deceptive air of insouciance that masked a deeper, almost territorial, wariness.

Stray cats, in various hues of black, brown and ginger, rested lazily on the beams of a hollowed out three-storey shikumen. The brisk cold suppressed the stench of garbage and junk just behind the wall.

I kicked through the rubble lining a narrow lane where two shikumen entrances squared a corner. Their headers were very subtle European-styled carvings. Over the last two months, the various households have left; leaving the doors bricked and boarded up.

“Look closer,” a local photographer once said to me. “Do you see them?”

Tucked on the side or sitting atop in the middle of the lane are small, DIY-like surveillance cameras, crudely taped on hanging bamboo poles.

In neighborhoods slated for demolition, even as households depart en mass after settling their compensations and finding suitable alternative accommodations, there are always hold-outs. Unsatisfied with the final compensation terms or simply with nowhere else to go, these households stay on, as brick by brick, their neighboring houses are torn apart.

“We have to install the cameras ourselves just to catch these thugs who harass us in action.” A middle-aged resident told me. He was eating his lunch while standing in the alley, wearing an old leather jacket and fuzzy slippers. 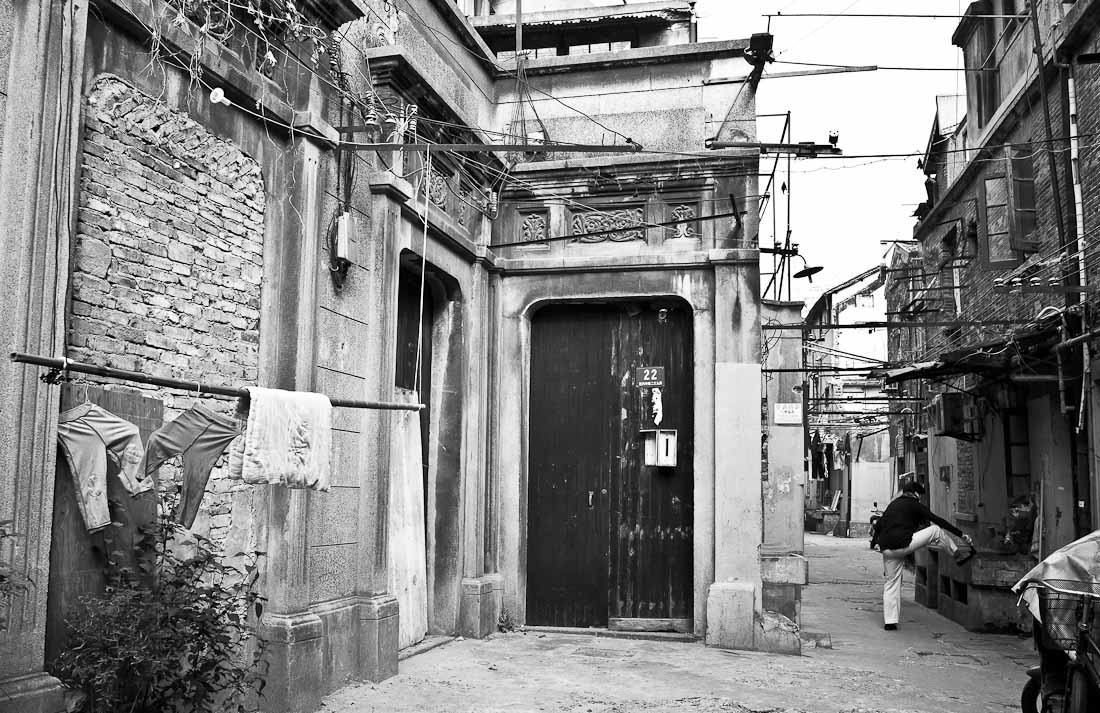 The ruffians he referred to are often reported as gangs, some even suggest employees, hired by the demolition company to get rid of residents who were stubbornly holding out. For years, news media have reported violent tactics employed by rough hands taking extreme measures, resulting in severe injuries and even deaths. With the powerful reach of social media, stories of desperate protests and even suicides spread like wild fire, stoking fierce criticism online.

Over time, stricter laws have been introduced to rein in out-of-control and ruthless tactics by developers and empower residents to be more aware of their housing compensation rights. In reality, of course, enforcement has been mixed. But based on conversations over the last couple of years, Shanghai residents have acknowledged that in larger cities, they were more aware and hence better protected. I once sat in on a local neighborhood committee meeting in Jingan district where citizens were openly and heatedly arguing with local district officials over the fairness of compensation terms. Referring to the lengthy information sheets in their hands, residents were fierce and unrelenting in demanding clarity and accountability. The fairness of dongqian compensation terms has always been very subjective as I have met local Shanghainese that have benefited as others have lost out.

Still, it was the remaining one or two hold-outs that bore the brunt of the local government or developer’s impatience. A Shanghainese lady, refusing to move from her room on the top floor of an almost empty old villa, shared an anecdote with a sneer, “I’m not leaving until I get what I rightly deserve. These thugs (hired by the company) may not attack me out in the open but someone once poured glue into my door keyhole! Sometimes they would trip my electricity and water supply at random. Do you see how cunning they are?”

I later found out that the demolition company had set up temporary operations on the ground floor of the very same villa, taking over the space that used to house a kindergarten. In the times that I have interacted with them when photographing the place, they had been cordial, even friendly. It was a professional set up, with blueprints and equipment stored neatly and hot meals were cooked for the hungry and hardworking. I never did ask the workers about the problems the woman complained about.

Meanwhile, the resident in the fluffy slippers insisted that thugs had stolen his parked bicycle and placed it somewhere else. “It was hours before I found it on the other side of the neighborhood! What idiots!” he looked back in amusement.

I asked if it could have the work of some mischievous teens.

He furrowed his bro then shook his head firmly. “It must have been them!” Then, he pointed above, “This is why we installed these cameras. Catch them in action and report to the police!”