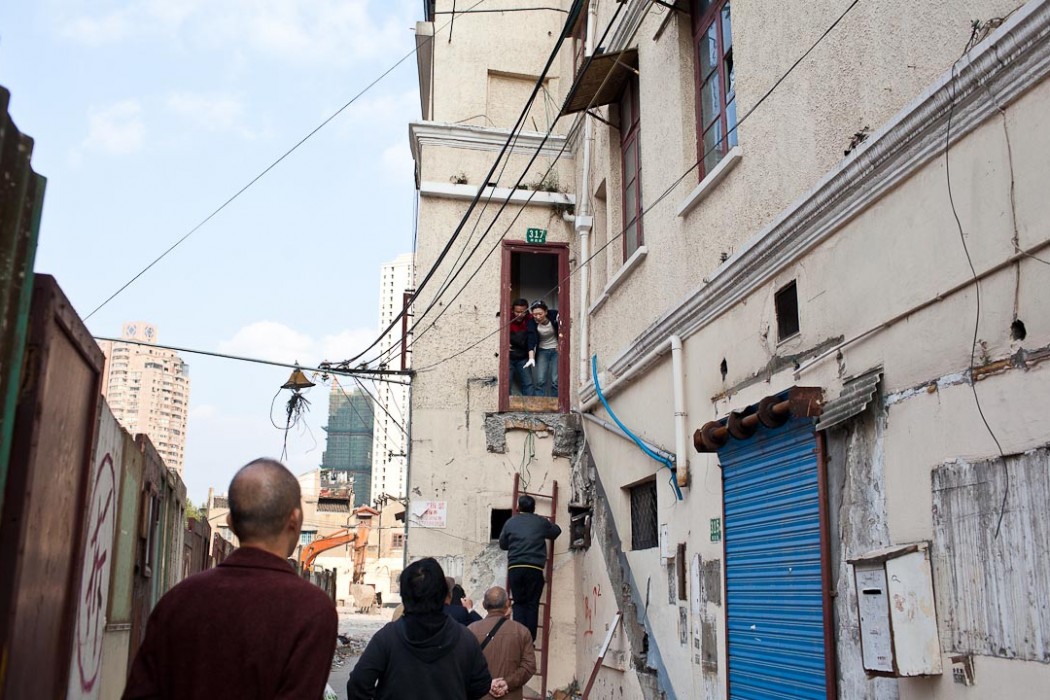 Where a commotion takes place, crowds gather and traffic slows.

I was in mid-conversation with a local resident who was pointing out a shop along Shunchang Lu (顺昌路). “Many of us have more or less settled our compensation with the local district to move out. There are still a few outliers, of course. This shop right here selling diapers, you see all those goods spilling out on the streets? The owner is fighting to the end to get more money.”

We walked by the shop, a bit dusty from age and quiet for a Saturday afternoon.

“He’s a little odd but very fierce and fun to watch when he’s arguing with the local resident district about his rights and regulations, which he knows a lot about,” the resident explained. “They don’t know what to do with him,” he later laughed.

Hearing some shouts, we became distracted by a crowd gathering at the exit of one of the alleys.

So we did what any normal person in Shanghai would do. Join in.

A young couple was perched on the ledge of a second floor doorway that spilled right out into the open. It was likely that a small wing of the house had been taken apart.

The woman, dressed in a trendy hoodie and jeans, began kicking the door through, using a brick to slam through the wood. Her partner watched her nervously from behind.

Why wasn’t anyone helping them get down? I wondered.

Another young woman on the ground, probably a friend, tried to drag a ladder from the end of the alley with little success. I nudged my way past the finger-pointing crowd to the front to volunteer. A few older men had come to her aid. 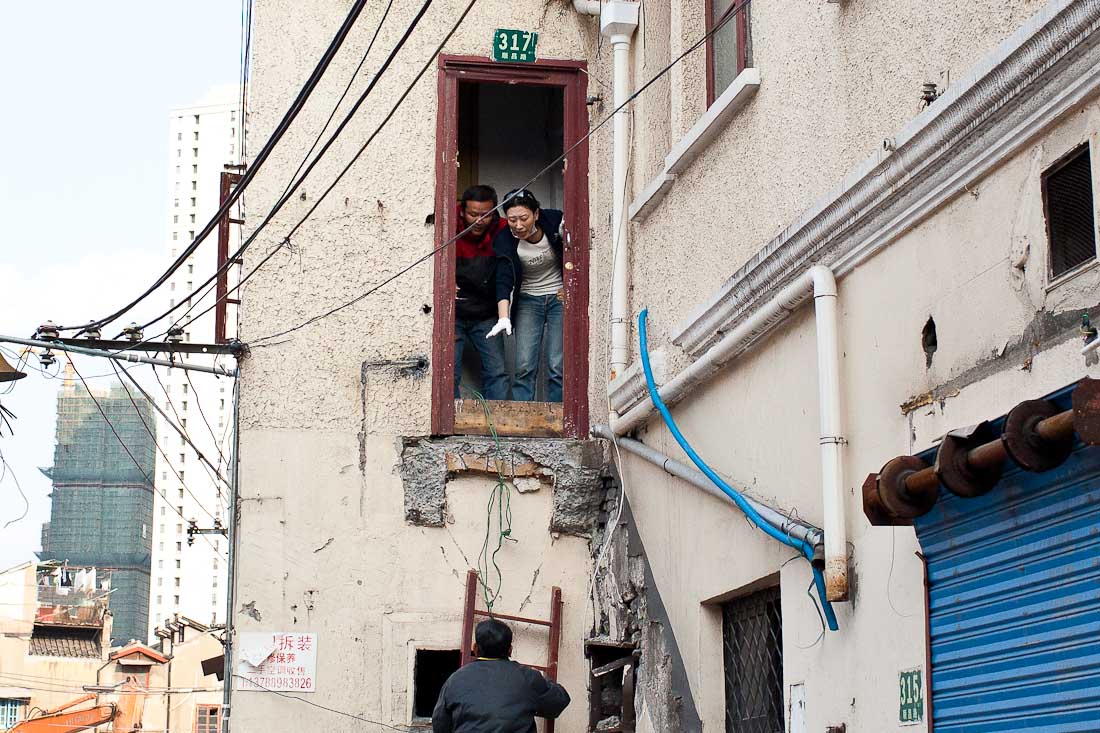 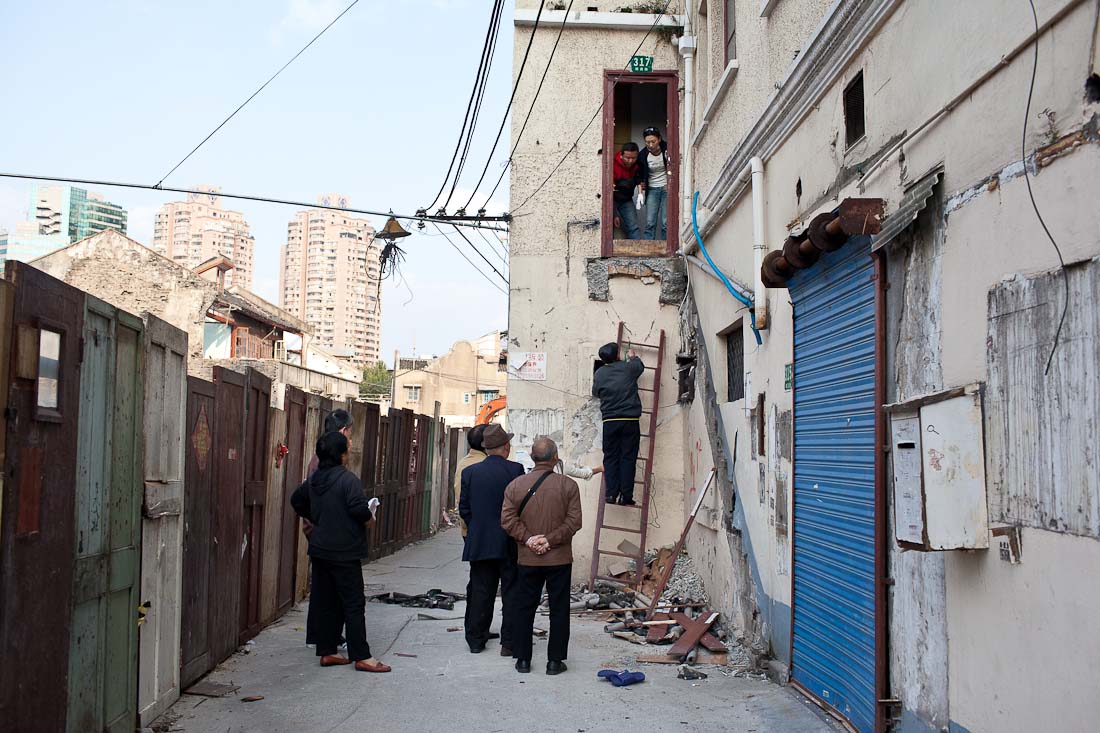 “What’s going on?” I asked a few residents. I assumed from the look of things that it was some kind of dispute with the local government.

An older man in jet black dyed bouffant looked me up and down, lost interest and replied, “Someone in that woman’s family had apparently signed the deed over to the local government and received compensation. They cut off the electricity and the house has been boarded up for demolition. Now, she argues such a deed required all signatures in the family, which she had not consented. So she has come back to this house to reclaim it.”

“They climbed in through my shop next door.” A shopkeeper exclaimed. “The police are coming. Here comes the demolition crew.”

Finally, the young woman precariously made her way down the ladder and a heated discussion in Shanghainese began when all players assembled – police, demolition crew and an enraptured audience. The young woman was especially red-faced and indignant about her plight. She slapped her hands together repeatedly and pointed at the house. The police listened intently. The demolition crew scratched their heads, wondering if they had to board up the place again. Her partner, the young man, remained behind to guard the place. 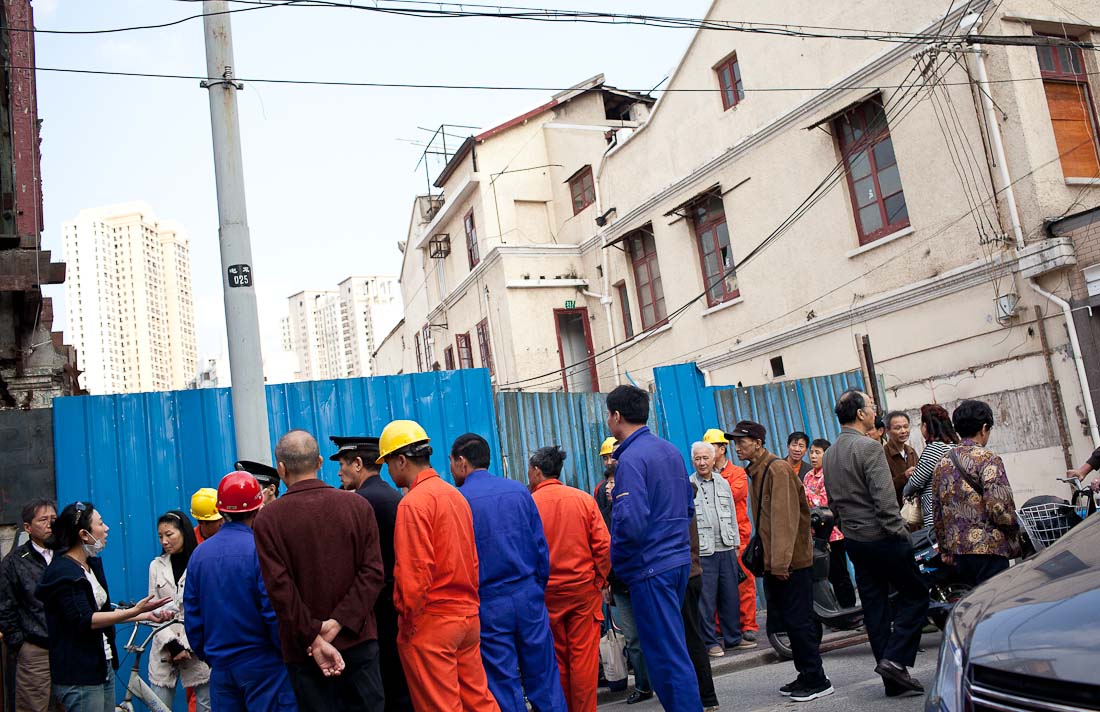 More people gathered and I pieced together the story, albeit in conflicting pieces.

“The property was owned by her grandfather who must have passed on the property to the children and grandchildren. But someone must have had the authority to sign it over. She doesn’t know the policies and making such a big commotion!” one woman in her pajamas noted.

“You can’t blame her! She is probably ensuring she gets her share of money out of this. All these family disputes nowadays are over property and money,” another middle-aged man huffed.

I asked him if it was normal if families fought over inherited properties in old neighborhoods like these.

“All the time! My family went through that once too, our house was passed down by my father. My brother-in-law and I didn’t speak for a while,” he explained. A few others listening nodded in agreement.

A middle-aged woman carrying her groceries added, “Look at her nice clothes, they clearly don’t live here. They only care when the property is being bought back by the government.”

Suddenly, I noticed the large mass of people had broken into small groups and were arguing amongst themselves. It wasn’t about the young couple anymore but the actual rights of the signatory and bequeathed, and what it actually took to complete a legal sale of an old property. Was the young woman ignorant or was she well within her rights within the family dispute? Judging from the shouting, there was strongly opposing viewpoints.

The resident I had been taking a stroll with earlier reappeared; he was one of the few who had helped the young woman climb down from the ledge. We watched her storm back to her purple electric Hyndai, she looked exhausted but resolute.

“She’ll be back. Her young man is still stuck in the house, you see him on the second floor?”

Hands behind his back, he surveyed the dissipating crowd and concluded. 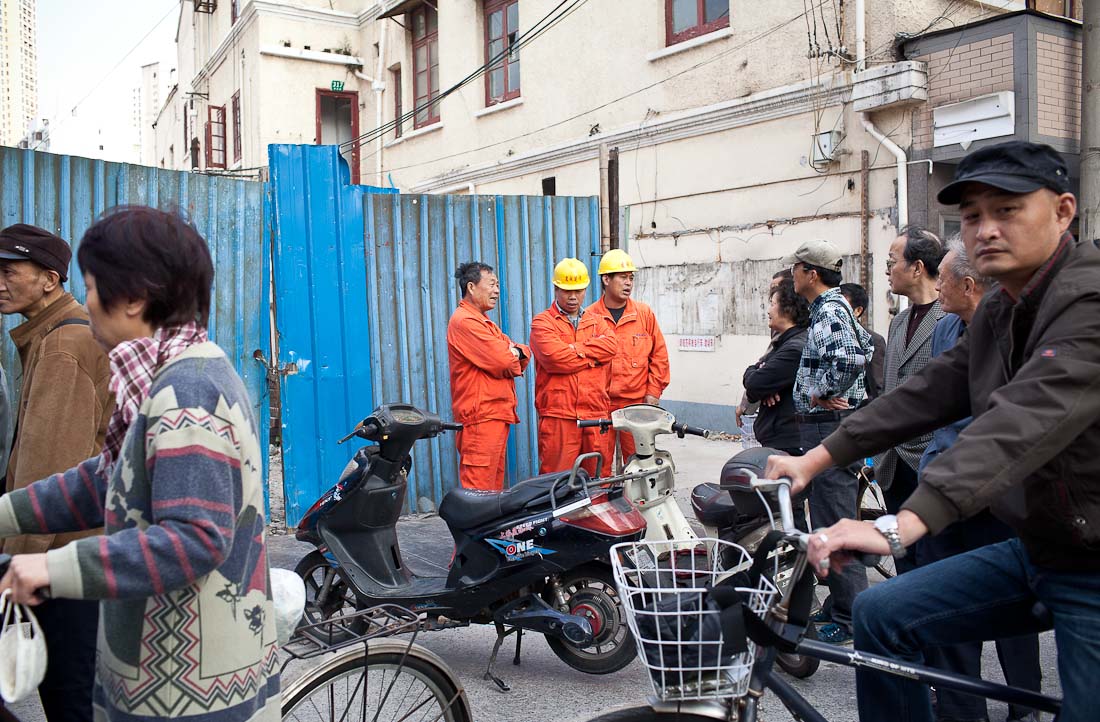