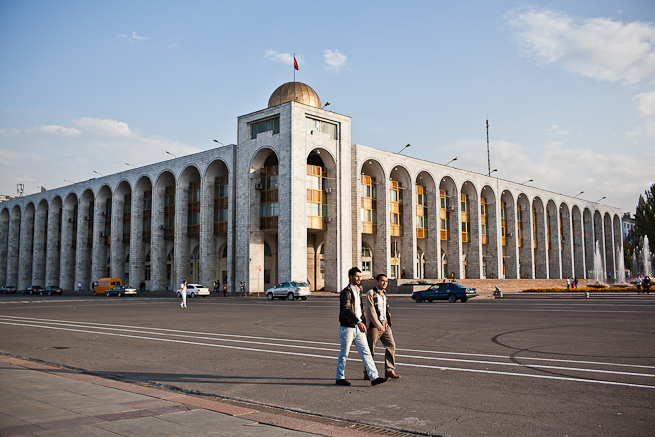 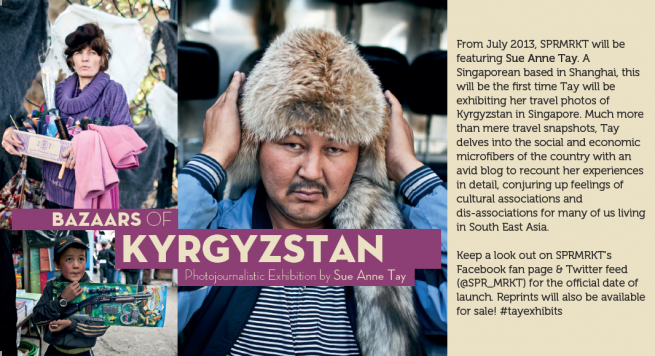 If you’re in Singapore this Friday, 12 July at 6pm, and fancy a tipple while listening me drone on about Central Asia, come on down to SPRMRKT (2 McCallum Road) for the launch of my exhibit “Bazaars of Kyrgyzstan”, which runs through September.

SPRMRKT is a popular London-styled bistro in Singapore’s financial district, run by my high school friend Quek Sue-shan and her very talented chef cousin Joseph Yeo. They’ve received nothing but rave reviews for simple but fresh and delicious foods, excellant service and a great ambience.

Sue-shan is a woman of many talents and vision, having studied art in London and delving deep into a real estate business. She envisioned SPRMRKT to be more than about food and has used her space to promote and support the arts, including exhibitions and art collaborations with emerging artists.

Back in February, over SPRMRKT’s (in)famous sticky toffee pudding, we got to talking about a collaboration. Why not feature another form of retail space like SPRMRKT in SPRMRKT? Trade bazaars came to mind. Readers know I dig them in all shapes and form.

Months went by in a blur of countless Whatsapp messages in the dead of the night, endless emails and Dropbox transfers, the “Bazaars of Kyrgyzstan” exhibit was born. But we didn’t stop there (we’re both products of a very ambitious high school), Sue-shan wanted to do build an art project inspired by my time at SPRMRKT. I’ll share more of that in a different post!

So T-minus one day. I’m flying into Singapore tonight like the rock-star that I am, for a modest but very personal show on my favorite subject other than Shanghai. If you have friends in my hometown, please spread the word via the blog’s FB page. I’ll be talking about my ongoing documentary work on Central Asia and a little about Shanghai Street Stories.

Sue-shan has generously featured both an exhibit introduction and artist interview of yours truly on their blog. Below are a few excerpts and some previously unpublished photos. For more, check out “SPR MRKT: 3 minutes with Sue Anne Tay”. 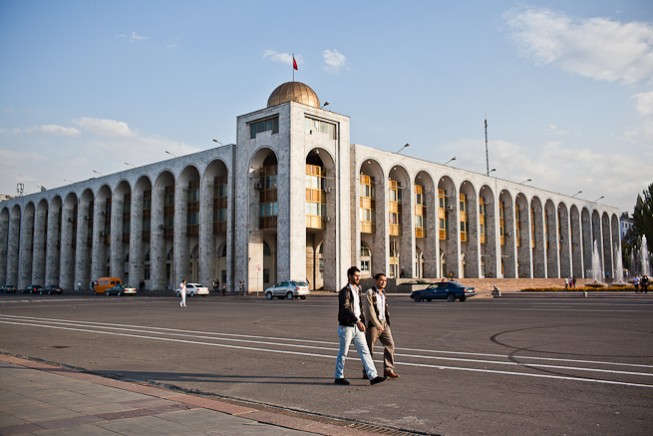 1. I guess the question on quite a few of our minds is… what is Kyrgyzstan like?

Kyrgyzstan is a dream for any nature lover. The landscapes are simply stunning as the country is mostly made up of mountains, valleys, glaciers, gorges and clear lakes (most famously, Issyk Kul Lake). Hence, eco-tourism is a major driver of the local economy.

A drive from the capital Bishkek in the north starts with beautiful snow-capped mountains and ends in the southern provinces surrounded by lush, tropical landscapes of Fergana Valley. In between, you see herders with hundreds of sheep, horses and yak dotted along highways and over mountains because the Kyrgyz are historically semi-nomads with a strong tribal culture. There was no concept of a sovereign state until the territory came under the Russian empire and later Soviet Union. Independence only came in 1991, so politically it is a young country.

I find Kyrgyz to be very friendly due to the tourism culture and also very laid back. The Kyrgyz are predominantly Muslim (around 80%) with a more secular brand of Islam as they co-exist (though not always peacefully) with minority ethnic Russians, Uzbeks and Tajiks. The sense of tradition varies; people in the capital Bishkek mainly speak Russian. As a Tsarist Russian and Soviet administrative centre, Bishkek is like a sleepy East European town with strong Russian influences. But as you move south, the Kyrgyz language and semi-nomadic cultural practices are more deeply rooted.

Being landlocked by Xinjiang province in China, Kazakhstan, Uzbekistan and Tajikistan, Kyrgyzstan makes a first great stop for a really unique travelling experience.

2. From growing up to living in a diverse and cosmopolitan city, could you relate to the Kyrgyz and their culture? Could they relate to you?

I’m pretty unabashed when it comes to approaching strangers and had a ball of a time talking to pretty much anyone who could understand me! It helps that I can manage a smattering of Russian, and younger people in cities are more comfortable with English.

In my time there, college students left the deepest impression, especially in the capital Bishkek. If there was anything good the Soviets left behind, it’s a strong emphasis on education. Prospect Mira (or Peace Street) is lined with universities and colleges and I spent a few afternoons talking to students who spoke about their hopes and aspirations, for themselves and their country. I think that’s a universal theme that really closes any cultural gap. 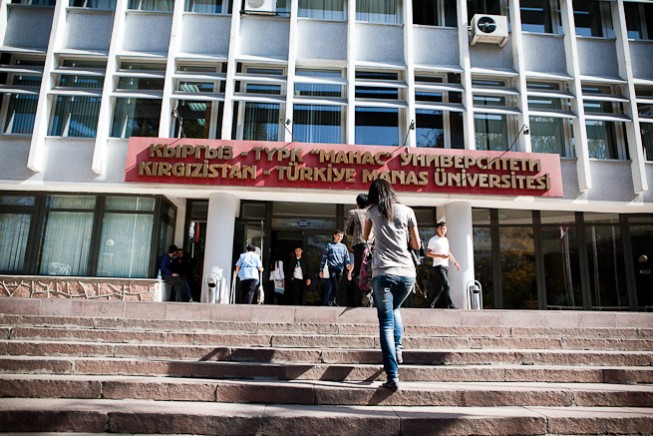 They talk about how Kyrgyzstan’s cities are teeming with well-educated young people but given few good opportunities. The country is still less developed compared to say Kazakhstan, Russia and China, so everyone wants to leave for better prospects. They often go to Russia to be construction workers, shop keepers and if lucky, students. No matter how tough or discriminatory life can be in Moscow, wages are still significantly higher than back home. I see these problems in China and across Southeast Asia, so I think it’s easier to relate to people than one thinks. 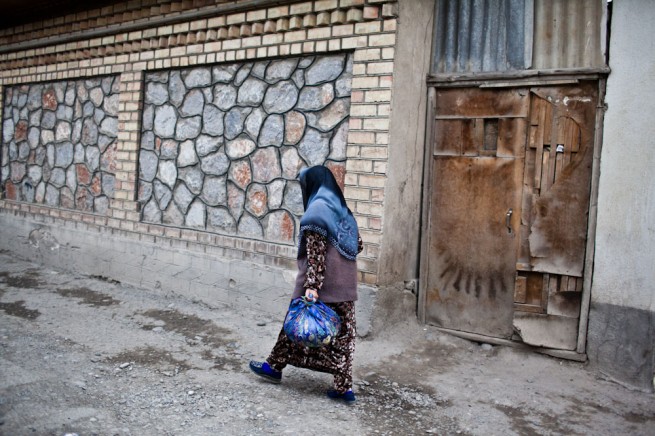 Head over to the SPR MRKT blog for the rest of the interview where I talk about street photography, Shanghai’s cafe culture and upcoming projects. Spread the love!

The Cackle and Pop of Street Food

[imagebrowser id=59] Over the din of chattering crowds and honking cars, the roar of fired up woks was accompanied by the sweet and savoury smells of winter snacks…