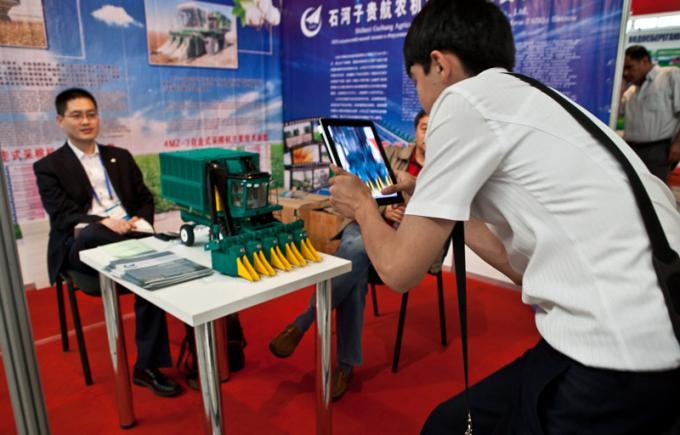 I shared earlier that I was in Uzbekistan doing some documentary work on Chinese influence in Central Asia. Some of my photography has been appearing on the project site ChinainCentralAsia.com where you can read more of my colleague’s work.

By Raffaello and Sue Anne Tay

Last week, we have been visiting Tashkent, Uzbekistan as part of our ongoing research on Chinese interests in Central Asia.

Fortunately, on the flight here from Beijing, one of us had the good fortune to be seated amidst a boisterous group of 40 Xinjiang businessmen part of a provincial business delegation attending a trade fair in Tashkent. They had been forced to fly through Beijing from Urumqi – a geographically illogical route – due to the fact that there are no direct flights between Tashkent and Urumqi.

At their invitation, we visited the trade fair earlier this week. Held in an old exhibition hall in the outskirts of Tashkent it was a no-frills affair with basic booths lined up four by four. In its fourth year, the Xinjiang Trade Expo was sponsored by the Uzbek Chamber of Commerce, the Xinjiang government, and the bingtuan (the former People’s Liberation Army (PLA)-managed state owned enterprise (SOE) responsible for much of Xinjiang’s industries).

On the Chinese side, the participants were a mix of Xinjiang companies specializing in locally produced goods like Xinjiang snacks of dabanji (the famous big plate chicken), mushrooms, culinary sauces, an array of Uighur style clothing (and some fancily called ‘Turky style’ clothing) and more generic industries like uniforms/garment manufacturing and electronic equipment.

Other key participants were Xinjiang subsidiaries of holdings companies based in Guangzhou as part of the central government’s push for increased domestic investment in China’s less-developed hinterlands. One manager highlighted that they had started this work in the province at the Guangdong provincial government’s request. They were offering potential Uzbek customers property investment opportunities in Kashgar in southern Xinjiang, Chinese electrical gadgets like smartphones and Ipad-knockoffs tailored to the Uighur market (appropriately labeled with an Android character donning a Uighur hat), lightning equipment, police and factory uniforms. Many of the samples on display were manufactured in southern China and shipped to and assembled in Xinjiang.

With the pomp of the opening ceremony behind them, the reception at the Xinjiang Trade Fair when we went was lackluster to say the least. A thin traffic of Uzbek passers-by browsed with fleeting curiosity at what they considered well made but expensive Chinese products.

“The Uzbek market is too small and low-income compared to the vast opportunities we have in Xinjiang,” a uniforms manufacturer salesman named Tan Chao complained. Two locally dressed older Uzbek women stopped by to finger the bright Gortex jackets and browse a catalogue. A listless conversation in stilted Russian began with no conclusive business made.

Like Tan Chao, many of the Xinjiang businessmen were bored by the lack of opportunities offered in the trade fair. When we spoke to a pair of salesmen from an agricultural machinery manufacturer subsidiary of AVIC (the Chinese military aviation SOE), they acknowledged their presence seemed almost futile. Neither spoke Russian nor were there any serious potential clients for the cotton-picking machines they were peddling (Uzbekistan is one of the global top five cotton-producers). They responded to inquirers by waving a sheet with the prices of their equipment carelessly scribbled. Amusingly, curious onlookers seemed more interested in purchasing the model on display rather than the actual machinery.

A manager of a Xinjiang-based electricity infrastructure developer (with affiliation to Siemens) named Liu Zhao was one of the more enthusiastic and serious participants. His company had specially shipped in a landscape model of an electricity grid made up of parts manufactured by their company. Liu spoke fluent Russian thanks to 2 years of study in Almaty, Kazakhstan and extensive experience travelling to the region for work.

Several businessmen we spoke to, including Liu, acknowledged the difficulties of doing business in Uzbekistan. The government welcomed investment but not competition with local industries. Hence, the options for Chinese businesses in Uzbekistan are in the form of trade of specialized Chinese goods to the Uzbek market, attracting Uzbek investment to China and vice versa.

The limited convertibility of the Uzbek currency – 1800 Uzbek som to 1 USD (at the official rate, we were told the unofficial rate was as high as 2800 som to the USD) – was another obstacle. It is prohibited to take earned foreign currency out of the country, meaning you cannot leave with more forex than you arrived. Thus, foreign companies are either compelled to reinvest domestically any Uzbek som profits or absorb foreign exchange losses made via the official foreign exchange centre.

Hence, the dilemma facing Duan Weiming, a Chinese producer of Western suits who had just made a modest sale of several tens of thousands in Uzbek som. He jokingly showed off his cash bundles to his friends. What is he going to do with all the cash he made? We inquired.

“Why, spend it all on dinner, drinks and karaoke!” he boomed smilingly in response. Maybe to go enjoy his new fortune, the group packed up early at four o’clock. With another day at the Xinjiang Trade Fair, the Chinese businessmen were determined to make the best of what remained a slow affair.

Preparing to gallop into the new year

Since I moved to Shanghai years ago, I have made it a point to visit the shops around Yu Gardens or Yuyuan (豫园) right before Chinese New Year…