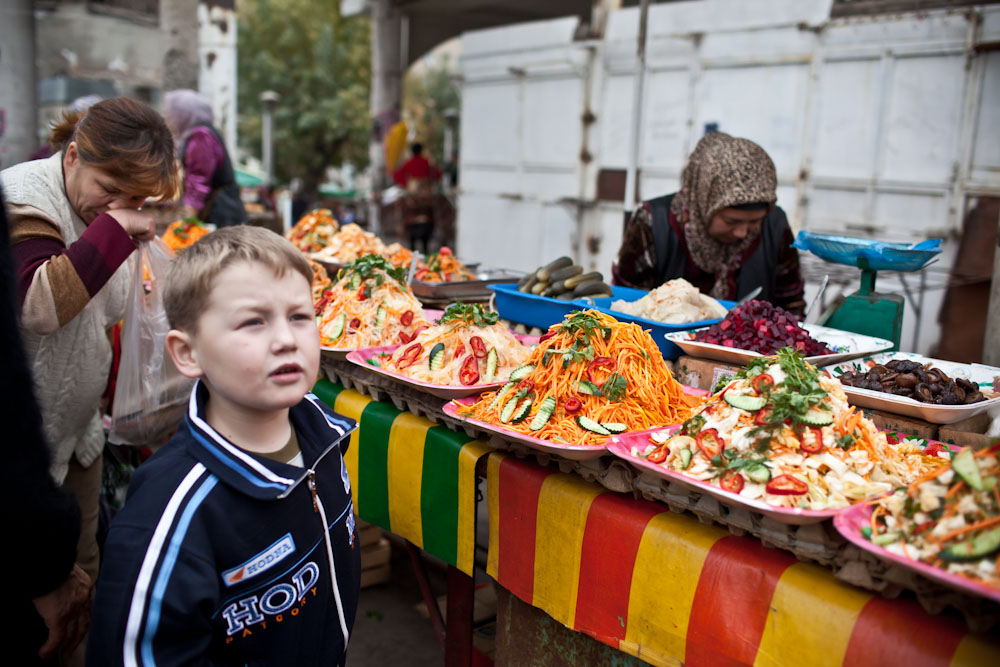 This is a continuation of my series on Kyrgyzstan’s trade bazaars, as part of my 3-weeks in Central Asia last October.

In my last post, I talked about the layout and structure of bazaars in Kyrgyzstan, and how they are major gateways of goods flowing from China, therefore attracting tens of thousands of traders and customers from all over the region.

But as busy as they are haggling for business, there is often a lull around lunch time and tea. It’s quite hard not to contemplate the next meal when the rich smells of roasted spiced meats and baked breads constantly permeate all corners of the bazaar. Not only is the tummy tickled, the eyes are also treated to a feast of color from fresh vegetables and fruit stands, whose produce taste as sweet as they look.

It is unauthentic to omit the important role of food in daily commerce. So in the interest of research, I’ve sampled widely the bazaars’ best cuisine.

Naan is everywhere and a staple in every household. Different from say South Asian naans which are thinner, softer and doughier, Kyrgyz naan are perfectly round, brown edible discs that often have a patterned stamp in the middle. When it comes right out of the oven, the first bite is heavenly. Mindless exploring through alleys had me in the middle of a family bakery where two brothers were turning out hundreds of discs that were cooling on rusted mattress springs. They were readily stacked and wheeled off to sell to nearby markets.

When naan is served, it is customary for hosts, as a sign of respect, to tear the bread into pieces to offer to others. I enjoy pairing it with shashlik, which is also a common Central Asian dish due to the prevalence of mutton. They are essentially skewered cuts of meats that have been marinated in spices (cumin, paprika, pepper, salt etc.) for hours and then grilled and served with raw onions. Shashliks skewers are arranged one bit-sized portion of meat to an equal portion of fat. Thankfully, the naan helps soak up the grease and flattens the sharpness of spice and onions.

Another favorite bazaar snack is samsi, which are small pocket pastries stuffed with chopped up mutton and vegetables. The real kick is the bits of cheap mutton fat which flavors better than it tastes. Widely available at any street corner, samsis are best eaten piping hot as the congealed fat from a samsi sitting too long in an open market is quite a turnoff.

Next are doner kebabs, which I’m pretty sure did not originate in Kyrgyzstan but rather from Middle East and Turkey. Nevertheless, it is simply delicious and appealing to the internationally diverse group of traders working in Kyrgyz bazaars. Slices of lamb wrapped in fresh lettuce and tomatoes and topped with a variety of sauces, I could eat it for every meal. (Well, I almost did.)

Laghman is a noodle dish popularin Krygyzstan and Xinjiang, China, and believed to be invented by Dungans (Chinese Muslims or ‘Hui’). Thick hand-pulled noodles are served with mutton sauce with peppers and vegetables. In Jalalabad, Kyrgyzstan’s 3rd largest city, I’ve actually had Xinjiang-styled laghman made by a long-time Uigher transplant from Urumuqi, thanks to a Chinese language professor who took us there.

In the fresh food section of the markets, cluttered with spice racks, slaughtered lamb hanging on hooks, endless rows of fruits and vegetables, I always like to watch fresh salads being made.

Cold salads are a Russian (and Soviet) influence in Central Asia. The original inhabitants of Kyrgyzstan (long before it was demarcated as a sovereign country) were nomads who ate mostly what flock they had. Vegetables were not part of their diet. When I first lived in Russia, meals were often laden with cold cuts and salads. As a result, I’ve developed a fondness of the simple salad dish of tomatoes and cucumbers, a fistful of chopped dill, olive oil, lemon and salt and pepper. The flavors are fresh, sharp and cool. Nothing is more satisfying.

These delicious bazaar foods are not limited to Kyrgyzstan and can often be found in other Central Asian countries. But it is the unique mix of Soviet, nomadic, Turkic and Middle Eastern influences that has kept the cuisine firmly regional. I am looking forward to continuing my Central Asian culinary adventures this year.