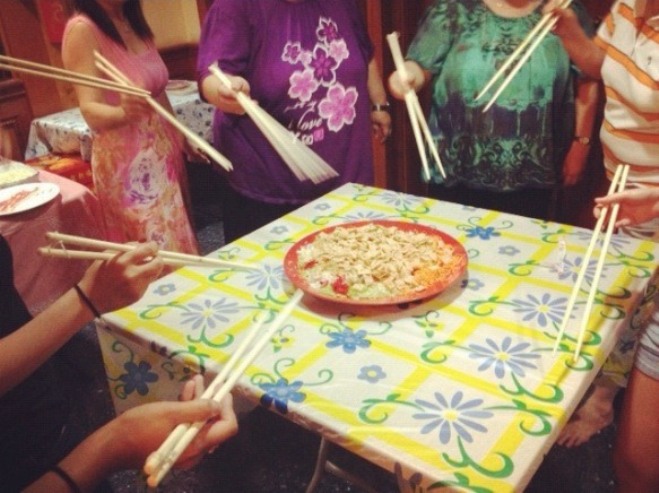 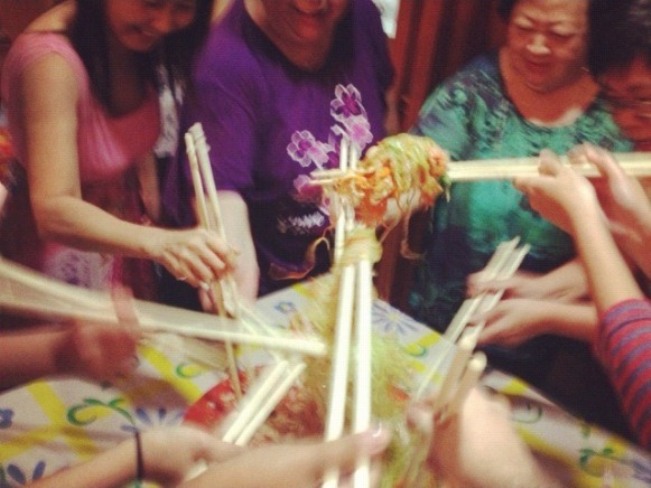 I hope you had a very festive Chinese New Year and a restful break (especially for those living in Mainland China who enjoyed a week long hiatus!). I spent mine in Singapore with my family, initially confused by a multiplying brood of my cousins’ nieces and nephews but resolved all reservations by eating my weight in food.

As part of Singaporean and Malaysian Chinese dining customs during CNY, families indulge in “lou yusheng” (捞鱼生). It literally translates into “toss raw fish” but it’s lovelier than it sounds. Family and friends gather around a giant plate of colorful shredded salad and sashimi (all ingredients have a meaning) and begin tossing them as high as possible with chopsticks. At the same time, we’d yell auspicious greetings for propserity, health and happiness. Absolutely fun.

Upon my return, Shanghai’s bitter cold was unwelcoming, almost painful. Hopefully a long photo walk this weekend will sort me out. I’ve also come across many good reads and this week’s post is lengthier than normal to make up for my absence.

– The Atlantic’s In Focus’s roundup of Chinese New Year celebrations around the world is the best so far. But look beyond the dragon dances, lanterns and fireworks. If there is one thing I’d really like to photograph for a prolonged project, is to compare and contrast how others like Vietnamese, Koreans and overseas Chinese celebrate CNY. I get a sense there is a heavier emphasis on customs and traditions that seem missing here in Mainland China, and also with the younger generation of Chinese everywhere.

My favorite photo has to be of Chinese praying at the Dharma Bhakti temple in Jakarta. Void of red and gold tinsel but very striking and traditional. I also came across this piece on how Indonesian Chinese have become slightly wary of standing out especially during CNY. The violent May 1998 riots that led to President Suharto’s exit have placed a great strain on the Chinese community there.

– A short but fascinating historical snapshot of how the Japanese prepared to invade Shanghai in 1932. This led me to original video footage of the Japanese attack on the city. Careful, it can be gruesome.

– I occasionally get questions about how to best capture the Bund in Shanghai. Hands down, it has to be sunrise. The delightful TakeMeToTravel online magazine featured a short story I did about strolling along the Bund at 5:00am on a spring morning.

– Nothing has inspired me more to take to Shanghai’s streets at night and discover the other face of the city, than the wide ranging and probing photo essay “Moscow Never Sleeps” by Gerd Ludwig. I saw elements of the underbelly when I lived in Moscow but never its sleaziest and darkest moments. The best part of this National Geographic feature is the elegant essay about Moscow after midnight, penned by novelist Martin Cruz Smith. What? You’ve never read Gorky Park and Inspector Renko? Pick up a copy, then thank me.

– I’ve mentioned before Bharat Choudhary’s powerful photography which challenges stereotypes of Muslims in the US and Europe. New York Times’ Lens has featured him.

– Martin Parr’s blog post “Photograhic Clichés” has been dutifully making the rounds online, which has led all photographers to reflect on how many we’re guilty of. Mine? It has to be:

” 4. The Nostalgic gaze. Photographers love to shoot a factory, a shop, a club or some institution that is about to close. We, of course, welcome and praise the sense of community that is threatened.”

Laced with a hint of snark, I know. This has inspired me to write up a list of “Photographic Cliches in Shanghai”. If you have opinions to add, the stronger the better, write me!