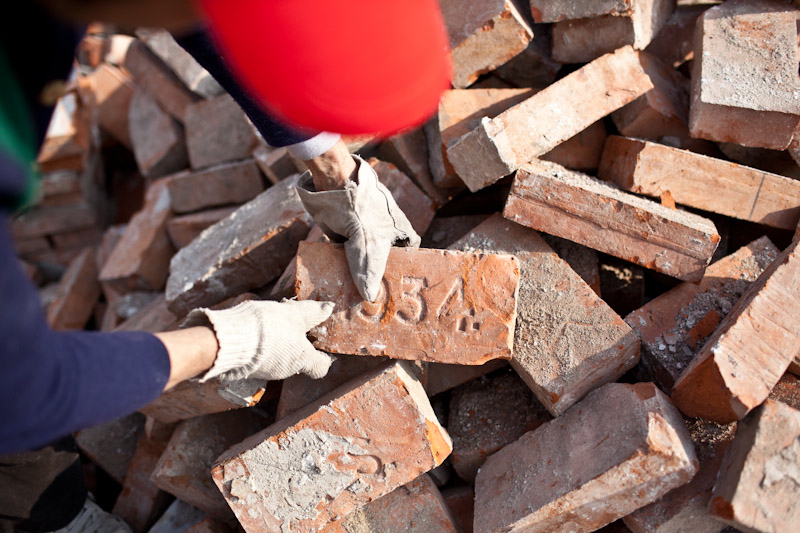 The entrance into De Sheng Lane (德生里) was like a door into nothingness. Surveying the vast sea of fallen brick and mortar, bleached by the blazing sun, I began treading slowly across the rocky terrain.

De Sheng Lane hugged the corner of Huimin Lu (惠民路) (formerly known as Baikal Road) and Dalian Lu (大连路)(formerly known as Dalny Road). After much reearch, I’ve theorised that it might have been named after Lian Desheng (连德生) (1893一1935) who was the bodyguard of a covert dual agent for the Chinese Communist Party, Yang Dengying (杨登瀛), who spied on the Kuomintang Party. Lian Desheng had previously worked for the British Tram Company located along Huimin Lu, not far from the lane, which leads one to assume he used to live in the area. Unfortunately, I had no one to confirm this with as all of the original residents have left. 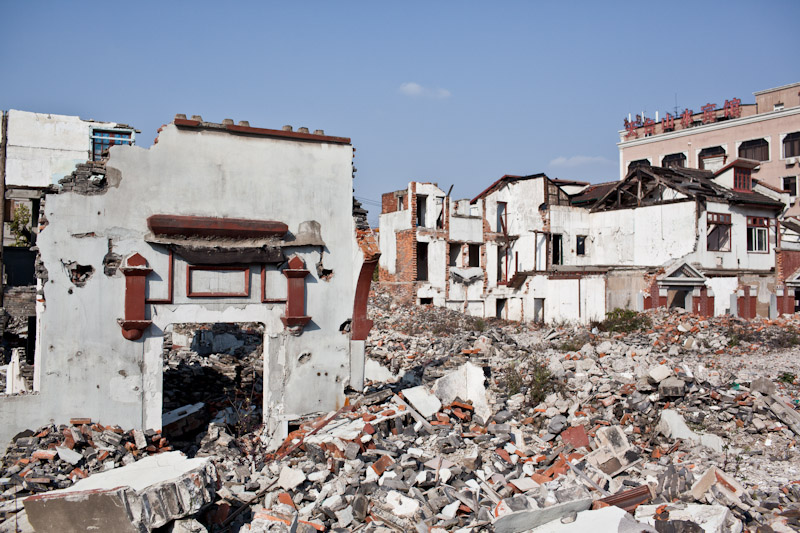 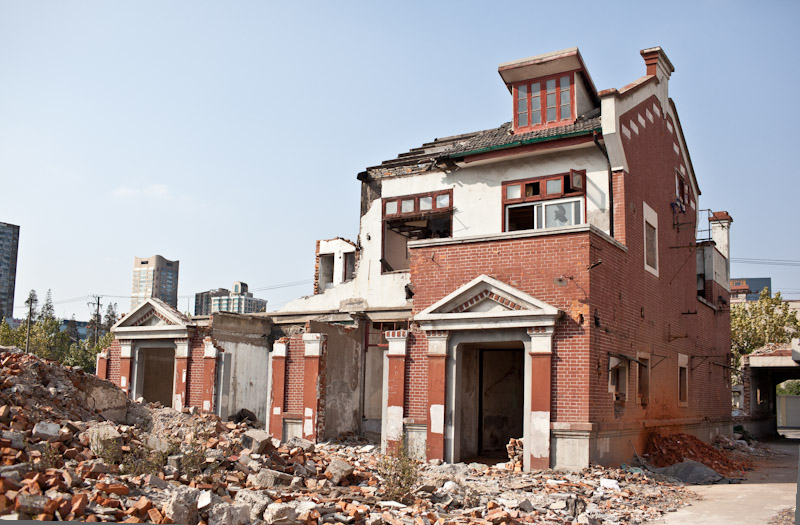 While weather-beaten, the lane entrance was beautifully engraved by Qing Shannong (青山农) (1880~1969), a famous writer, painter and calligrapher. The few remaining structures in the longtang (弄堂) appeared to have been well-preserved even before demolition. The reddish brick hues and white outlines were clean and distinct, which made it a bigger shame to see them hollowed out.

Gingerly, I hopped from brick to beam to wood, watching for rusty nails and potential cave-ins. I knew I must have been a silly sight to behold, like an ant lost in a mess of dirt. But I was not alone.

In the distance, an elder woman in her 50s appeared to be sorting bricks. She waved upon seeing me, I could have sworn I saw the briefiest glimmer of her gold tooth reflected in the sun. Or perhaps it was from the brass buttons on her cheery sweater. 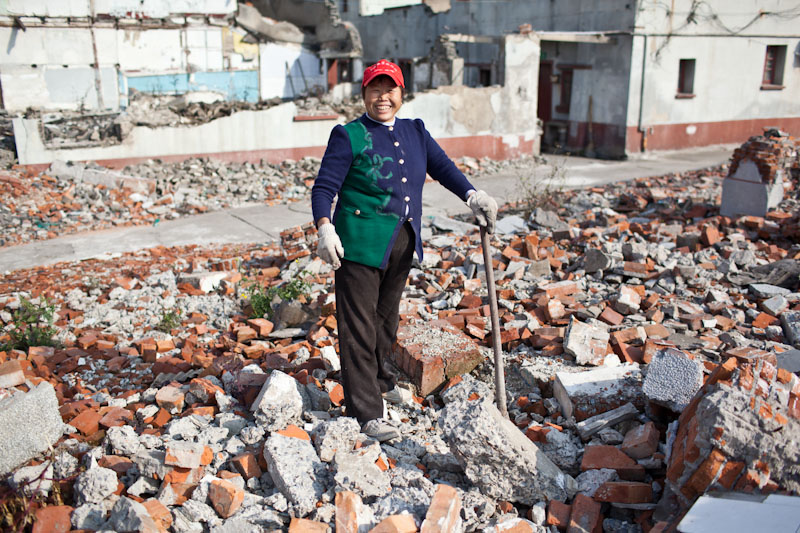 From Kaixin, Chongqing, Mrs Wu’s son-in-law owned the rights to the area of Desheng Lane for demolition and cleaning up. I’ve noted over the years that many people in this particular business were from Chongqing, drawing in many relatives and hometown friends to Shanghai, where they’d live and work together. Mrs Wu readily confirmed with a vigorous nod.

“I’m retired and just passing the time, you know,” she added as she deftly picked and separated piles of bricks, often used to refurbish old houses. “Look here, you see? The bricks are very good quality.” She pulled out a sturdy red brick, marked with “1934” – the year the longtang was built, others were marked “C.S.”, the manufacturer of the bricks.

At RMB 0.30 a brick redemption (RMB 0.25 for the smaller grey slates), it was quite a lucrative retirement. I joked about pitching in to split profits. She laughed, infectious and hearty, and continued chattering when I asked her if she goes home often. Not since she moved to Shanghai to join her children 9 years ago, she said.

“Although, I was there a few months ago to bury my daughter.”

I stopped, unsure how to respond. I was thrown off by her easy admission, of how her 31-year old second daughter had passed on due to a white blood cell-related disease. She waved her hands to excuse my murmured apologies, as if having sought closure a long time ago. She paused, her smile wavered ever so slightly, and resumed jabbering on about Kaixin, Shanghai, life and everything else in between.  Her husband, Mr Wu, and another neighbor later joined us, and minutes became an hour of folksy tales and shared photographs. 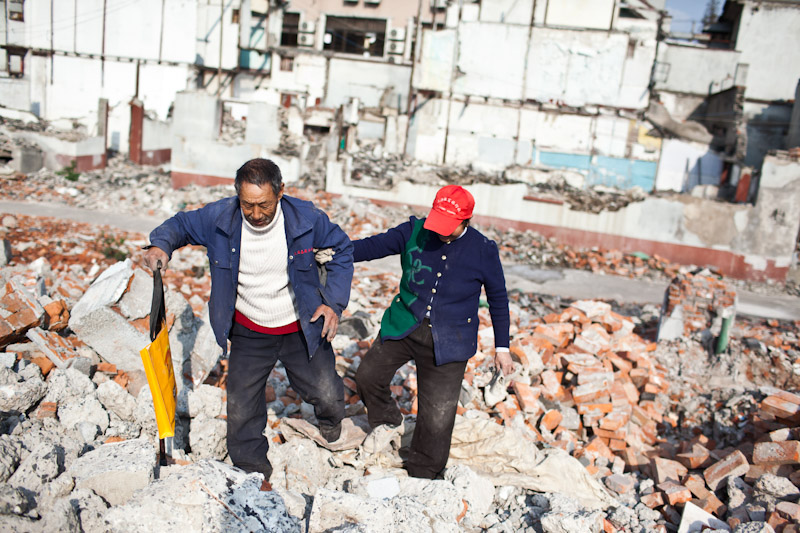 I noticed that some people that I have met in Shanghai, especially those far from their hometowns, shared details of their lives very easily. There were always stories of children left behind, mouths to feed, mortgages to pay and family members who were ill or even missing. They bury the stress on a daily basis, which forms a tightness in their chest that swells and gush forth at the slightest probe, which lasts as long as you had the patience to listen.

For a country where people are so distrustful of each other, confessions to strangers may be the catharsis they seek in a large and lonely city like Shanghai. 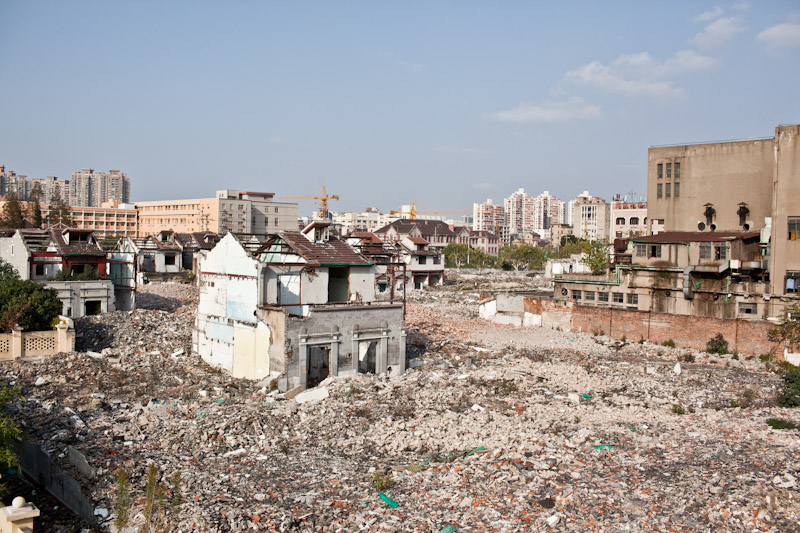 A balloon a day…

A neighborhood market can sometimes be like the beating heart where all arteries lead to, the arteries being the longtangs or alley houses that surround it. There is…