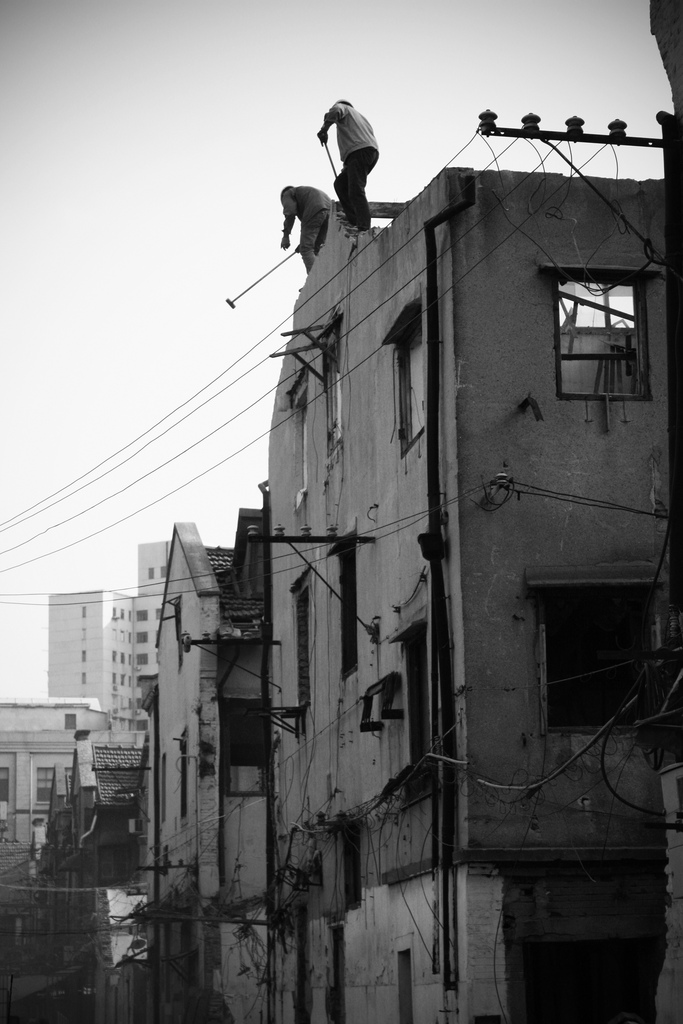 You see them almost immediately as you emerge from the Dalian Road Metro (大连路地铁站) station along Changyang Road (长阳路), a jarring picture against the late afternoon sun.

Two men were perched precariously on top of a roof ledge, swinging their thin hammers to break up, brick by brick, yet another old house.

What was immediately disconcerting was the way the demolition was taking place. It was incredibly manual and alarmingly dangerous. Most building construction (ground up) have basic scaffolding and even if they seldom meet onerous Western standards in the same industry, efforts are made to provide basic safety beyond a rickety plastic helmet.

Demolition can be a different matter.

They are often outsourced with little proper supervision or regard for basic safety since the objective was to just flatten everything and have the debris carted away. Moreover, demolition of old houses is not done by bulldozers largely because they cannot fit into the alleys and it is not uncommon that there are still-occupied neighboring ‘hoods. An engineer would have surveyed the land to identify public water or sewage pipelines to avoid but otherwise, the task is left to workers with instructions to hack from morning to night.

This man was part of the demolition crew.

Behind the Camera: Ishi Mak on photographing Shanghai’s architectural heritage

Ishi Mak (麦宇斯) is a dedicated photographer of Shanghai’s architectural heritage with a style reminiscent of Japanese minimalism. Widely known on Flickr as シャッターBUG, he captures what remains of…