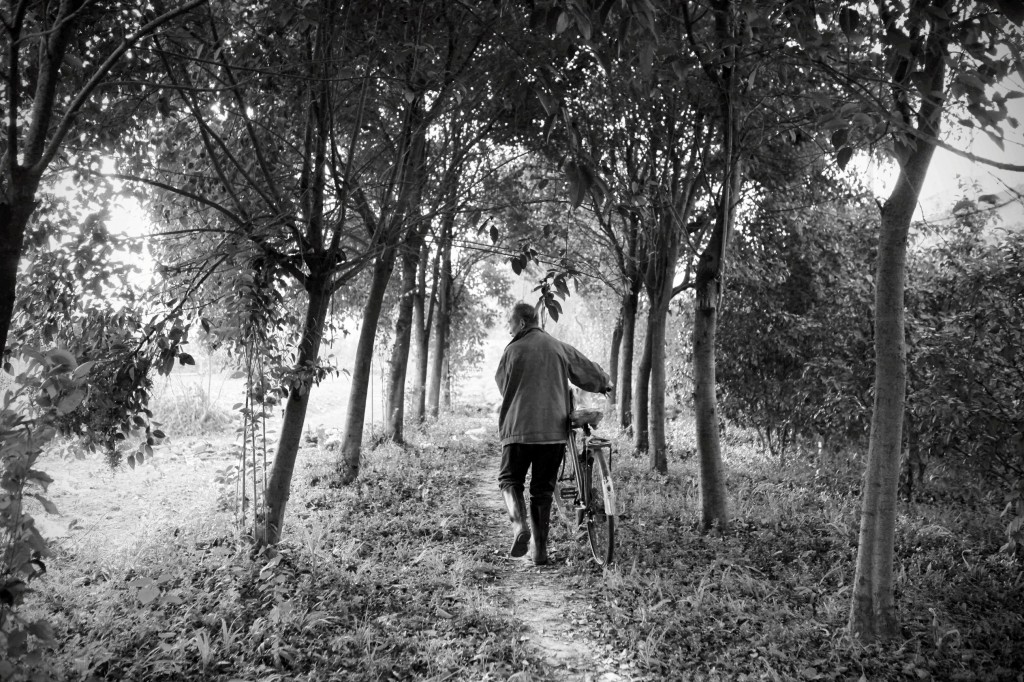 “Come along, come along!” he enthusiastically motioned me to catch up. For all his 60 years, he walked with a spring in his step while wheeling his bicycle. He took us through a narrow pathway that led to a compound of old and new homes, his skipping quickened to a brisk trot.

“This is my neighborhood! Much has changed, we used to made up of villages and farms.” “But next time you come here, you know how to get around. Just tell them you know me, Mr Cai!” As he nattered on, his smile widened by the mile and his good cheer only grew more infectious. He spoke rapid Shanghainese and only slowed down once in a while to switch to Mandarin for my benefit. 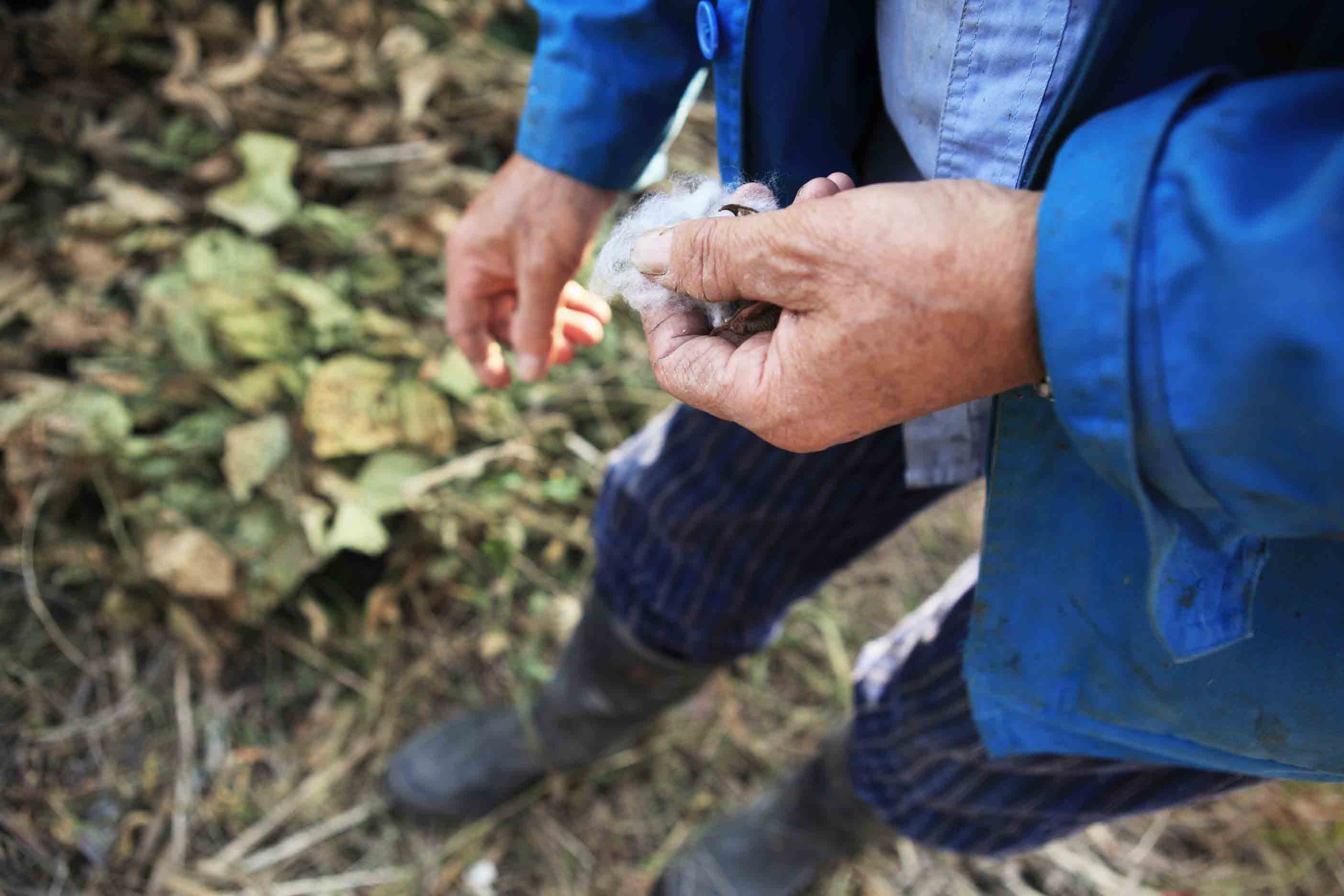 I chanced upon Mr Cai’s house when I was riding toward the end of Line 5 (an extension of Line 1, interchange at Xinzhuang (莘庄)). His house was a lone structure in the traditional Chinese architecture style called 挑山 (tao shan – or literally ‘peach mountain’) where the main ridges curved outward on the two ends of the Chinese gable roof. The carvings were simple, depicting the modest roots of the household and the village when it was still a collective. 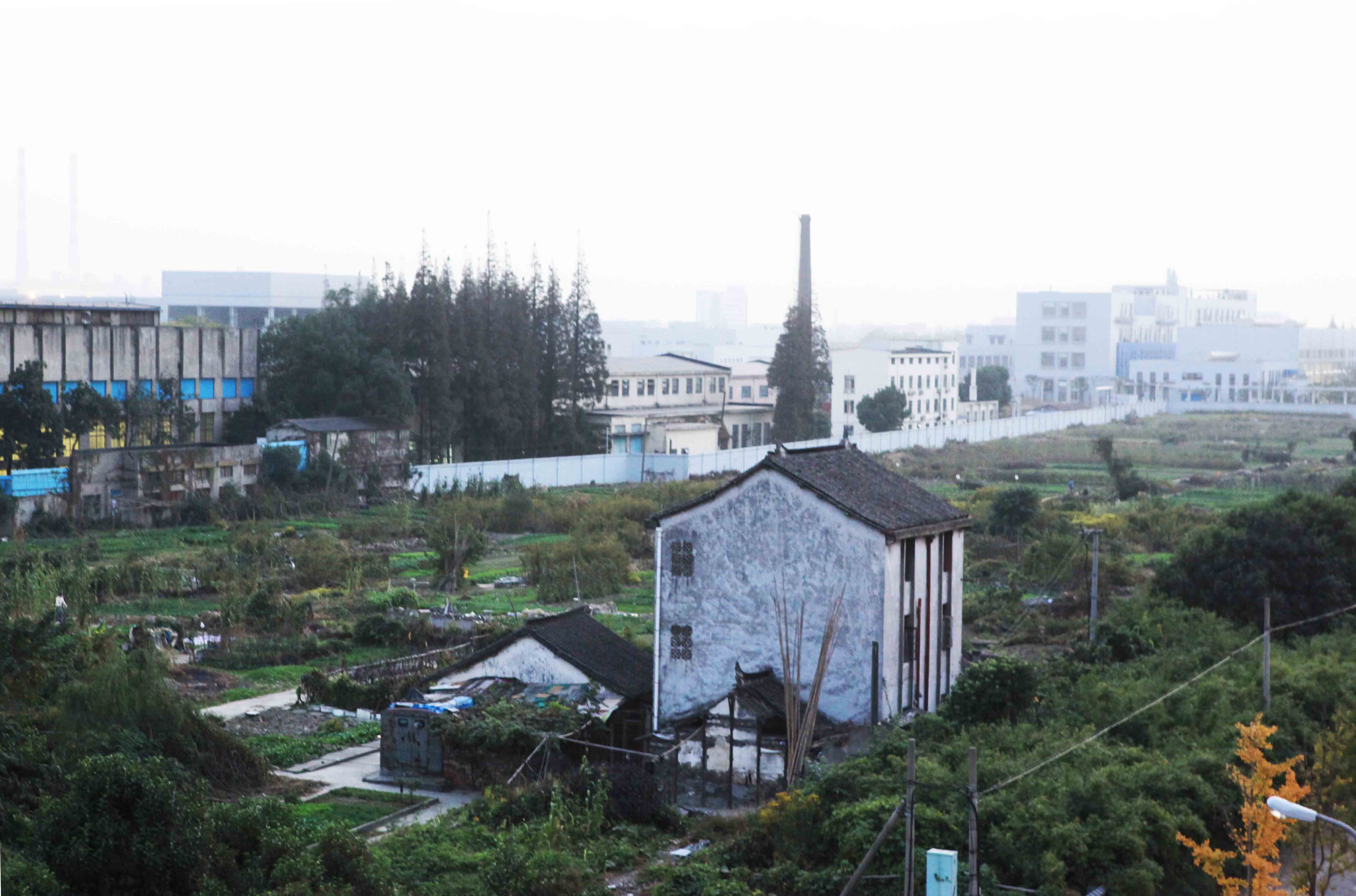 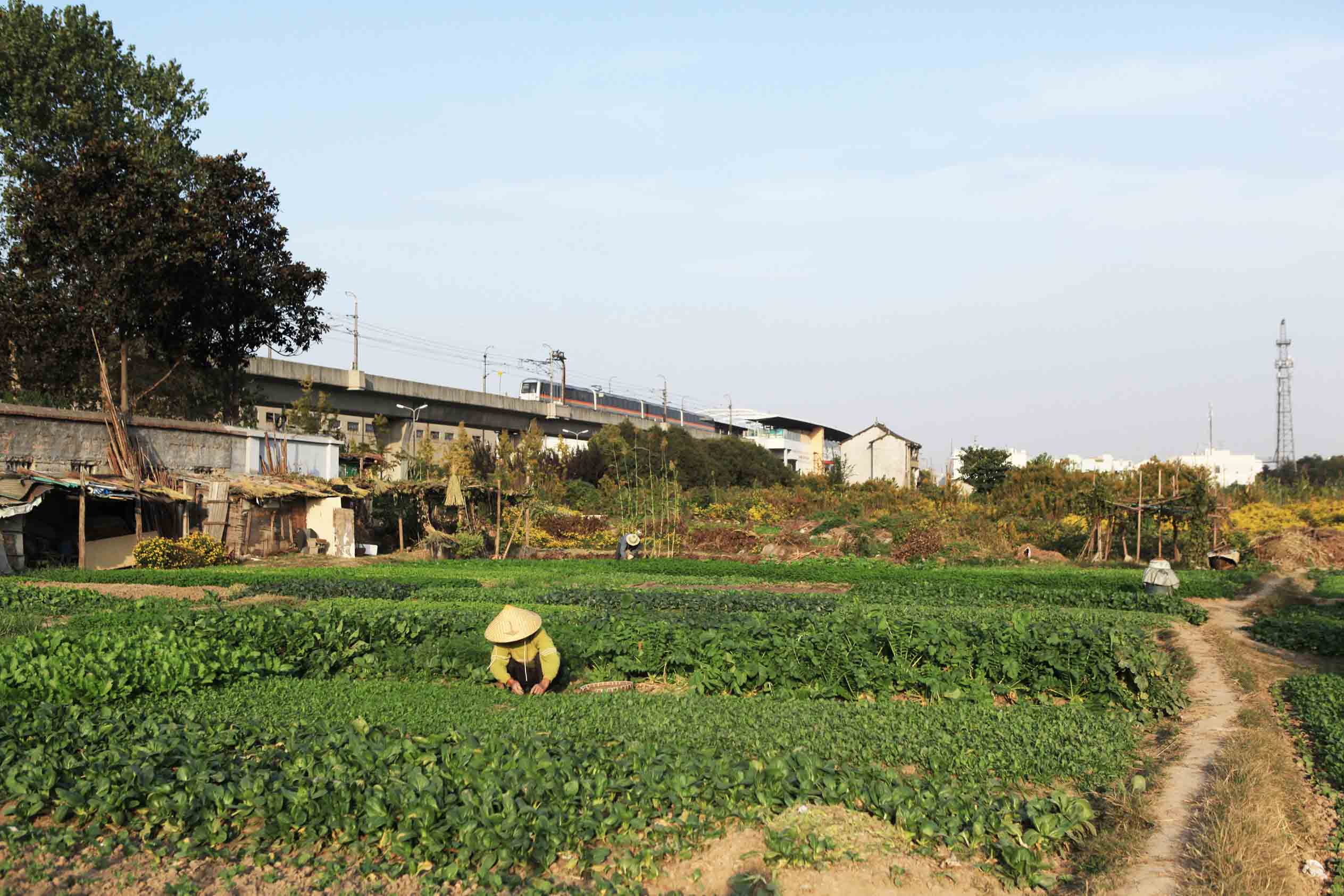 Now, a wide road sliced through it, with light-goods factories from the 1990s thrown up alongside it. Mr Cai’s house stood alone in a 4 to 5 block-length farm which has sprouted from a demolished plot of land. Developers had torn neighboring homes but for some reason, construction stalled and the land fell idle. Not ones to let anything go to waste, neighboring residents, some former and all retired, gathered to begin planting simple vegetable crops like bak choy, lettuce, spring onions, chrysanthemums and even cotton.

Yes, cotton bushes were plentiful though not enough to make an industry out of it. Mr Cai proudly pulled at his blue pants and rubbed a head of cotton in his fingers for show, “My wife spun these for me from the cotton we grow, she makes all my clothes!” When he introduced me to his wife who was harvesting bags of vegetables, I was immediately struck by her petite frame and sparkling eyes. She looked older due to years of labor yet wore her age well and I imagined her beauty made her the belle of the village in her youth. She blushed at the statement. Her husband laughed, abashed yet in agreement. 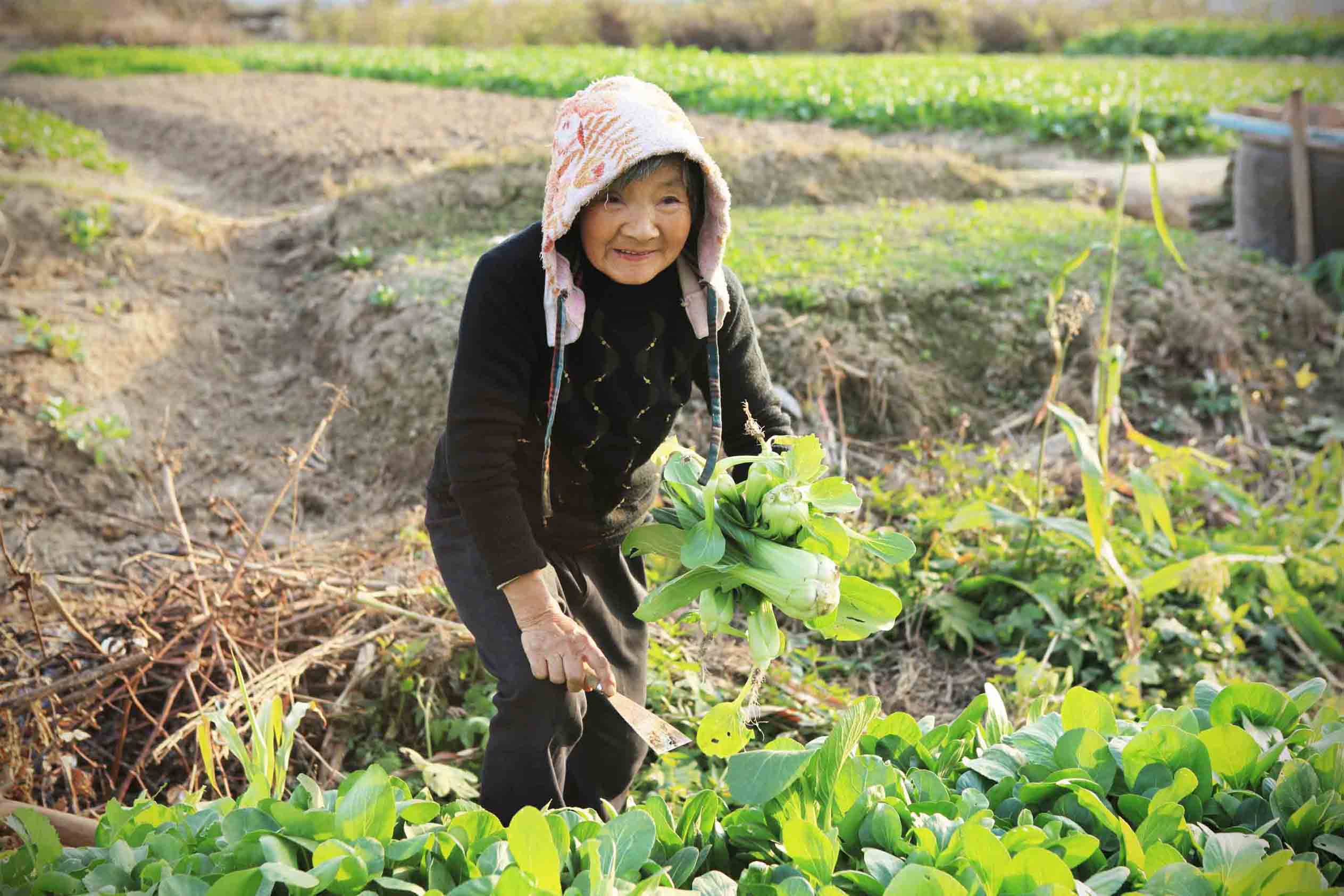 Mr Cai (Like ‘matchstick'(火柴) in Chinese! he exclaimed) had worked in a factory until his recent retirement. Like many of his neighbors in his once former village, where many carried the same surname like a clan, his farm fed his family well. Giant squashes! Giant cucumbers! all craftily tucked away. Most of his personal plot was encircled in a makeshift fence that mysteriously had no entrance until he pulled aside a thicket of prickly and thorny bushes to reveal a small opening. “To keep intruders out,” he smirked. He generously plucked at his many herbs and vegetables to let us touch and smell. Halfway through our little tour, he insisted on gifting us two giant bags of bak choy. “More? You want more?” he generously urged.

Stepping into his house, I saw vegetables and cotton piled in the corner, and hanging on the wall was his granddaughter’s school schedule. Waving me along, he showed me whole bags of tools, of which many were for trimming hair and beards. He had opened a modest barber shop since retirement, putting a skill he had acquired since he was a child to good use. 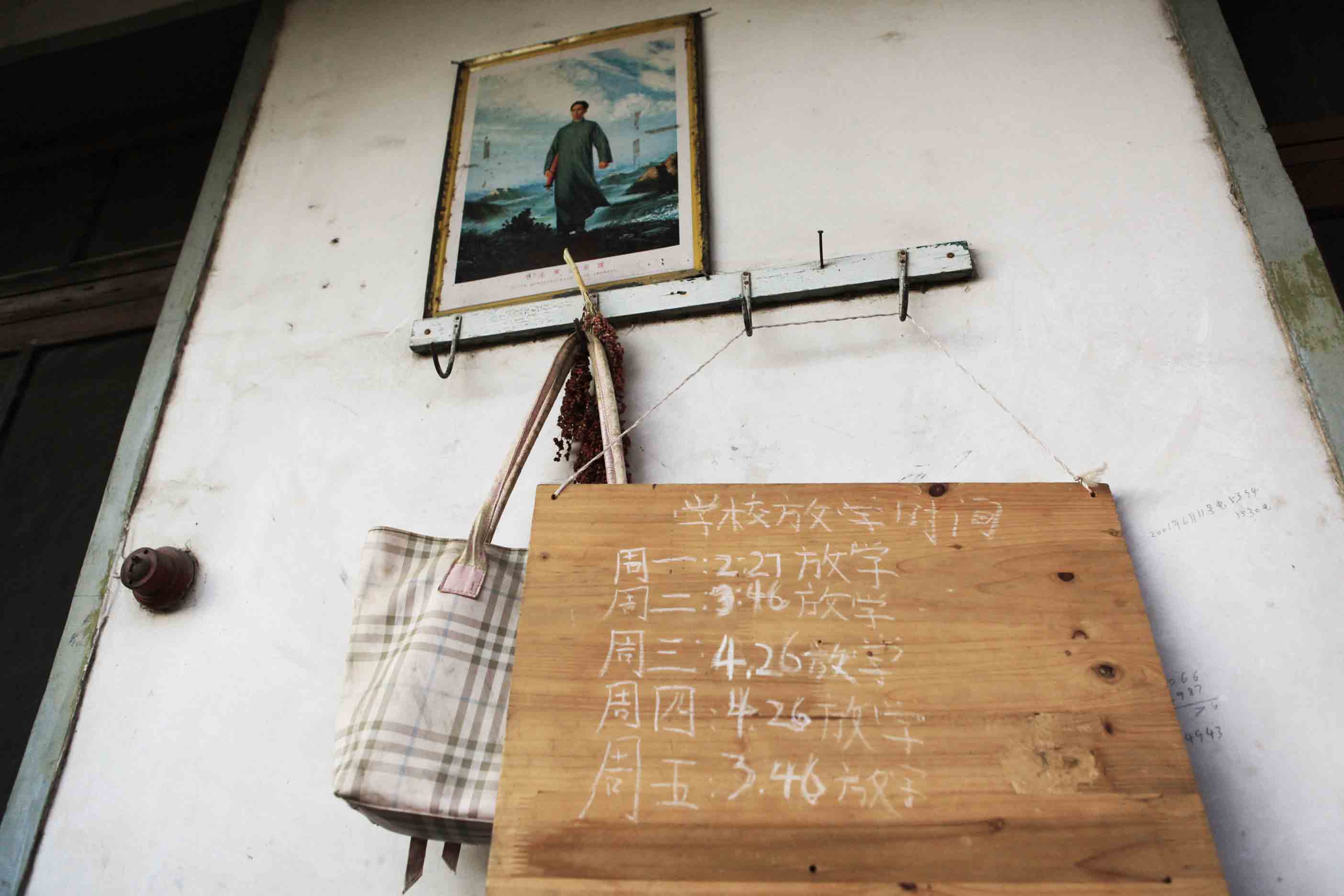 “Do you want to come visit my barber shop?” He had asked eagerly. There was this vibrating energy about him, all he wanted to do is share, as if his heart would burst otherwise.

He unlocked the front of a storage unit and it was like stepping into a quaint universe of yesteryear. A single old barber chair (RMB 100/ USD 15) stood in the middle of the room, surrounded by an equally old television. It had the personal stamp of a teenager finally given his or her own room after years of cajoling, Mr Cai hung old photographs and posters of Mao Zedong and other great Chinese leaders. Phrases were also scribbled all over in chalk that summarized his life philosophy: “Please love and take care of yourself.” “Be safe in your journeys” “Wishing you good health!” “Live a long life!” At the entrance, there was a small piece of paper that listed the 30 ways to a more fulfilling life – filled with health and mental tips to be positive and happy. There were no religious overtones or verses – just plain common sense and good wishes from one kind and gentle man to his customers. 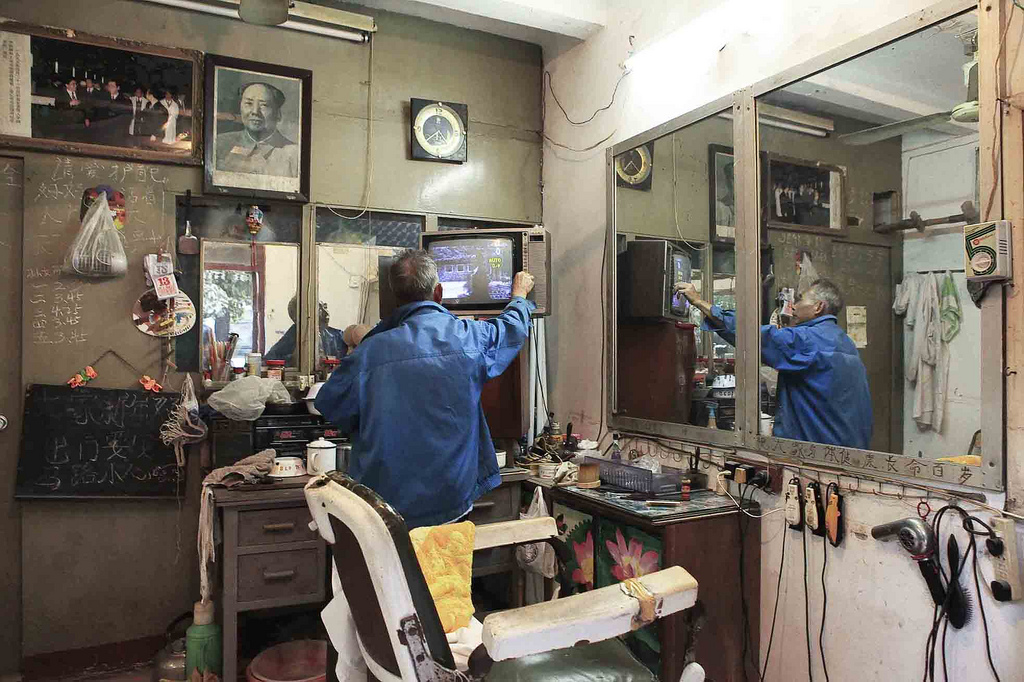 “If I have enough for rent, I don’t charge for close friends,” he said while testing a razor on his scruffy beard. Hit by another inspiration, he climbed on a chair to open a small attic hatch. “I also go fishing in the river nearby!” he huffed as he pulled out his fishing pole and net. Wringing his hands, he looked around for other things to show us. It was hard to keep track of his wandering thoughts.

The whole time, I marveled at his energy, enthusiasm and bursting optimism. His barbershop was like a little space where he reveled in his hobbies, good cheer and warm thoughts. “I love your shop, Mr Cai,” I said sincerely. His affection for people around him – waving at old friends as they pass by, identifying them by their positive traits and memories, – and generosity to strangers reinforced why it was important to see the individual and not society when the latter gets you down. Shanghai can be tough on its inhabitants, but individuals like Mr Cai float above the stress, tension and lack of care that pervade on the worst of days.

I returned a few weeks later to give Mr Cai some portraits I took of him and his family. His son accepted them as he was away with friends. “Are they at the barbershop?” I asked, hoping to hang at Mr Cai’s Wonder Emporium. A wry smile lifted the corner of his mouth, the son replied, “The shop’s gone. They are renovating it for residential housing.”

For a two-way street, Hongkou market is a smorgasbord of traffic. It is impossible to stand still in any part of the street without a car, bicycle or…