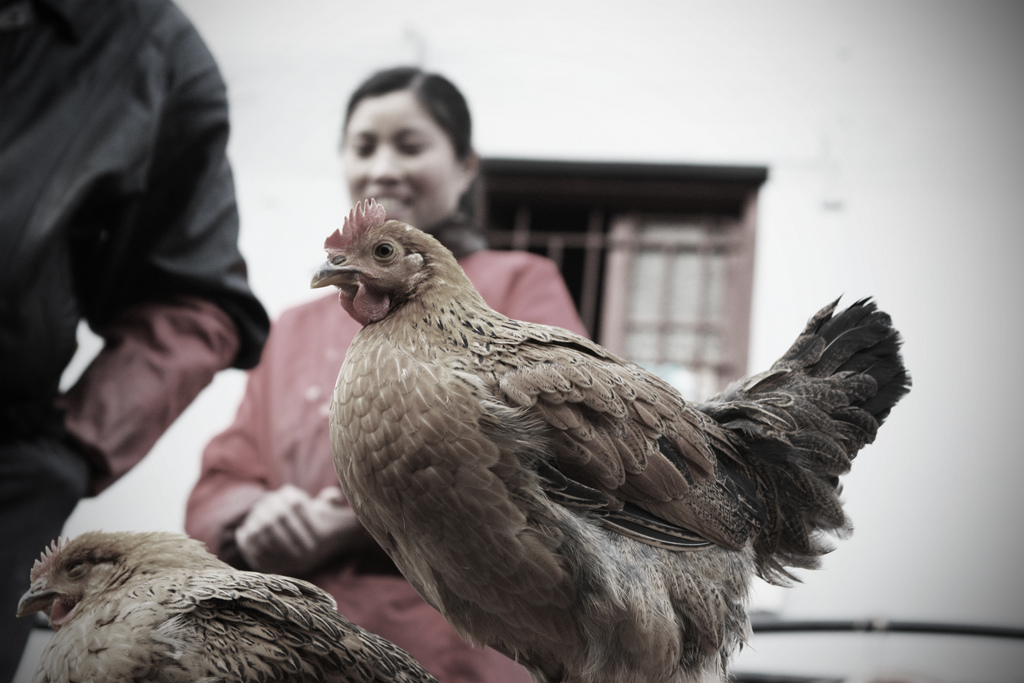 When I was growing up in Singapore, chickens were also sold live and you would get to pick them out right from their cages. A vivid memory I had was a butcher dragging a particularly persistent chicken out from its cage, its wings in mad flap, as if to say, Damn if I’m dying today.

But it was no match for the brute strength of the butcher. I watched him throw the still-flailing chicken into a huge barrel of water, dropped back the heavy lid and for the next minute, you could hear the fluttering, splashing and squawking.

In a Chinese market like the one in Hongkou, the budget determines how free your chickens roam. Sweatshop chickens are shoved into cages so cramped, there is no choice but to tuck into a ball and wait for death. Meanwhile, beast-like hens and cocks perch and preen on top of those cages, watching vacantly at the passing crowds. After being fondled and subsequently weighed, death struck quickly.

Slitting the throat has proved the most effective way to kill a chicken. And thus, right on the street where bird flu would propagate and fester, I watched the woman bleed out the bird into a dirty bucket. As the chicken heaved its last breaths, the lady began to ruthlessly de-feather it.

There was no sound left, only a post-mortem spasm.

But oh, the squawking. You could still hear it in your head.

A book on Hudec’s most iconic architecture in Shanghai

On my way to the Rockbund Art Museum for coffee this past Sunday, I strolled by the distinctive and imposing Christian Literature Society Building and the China Baptist…