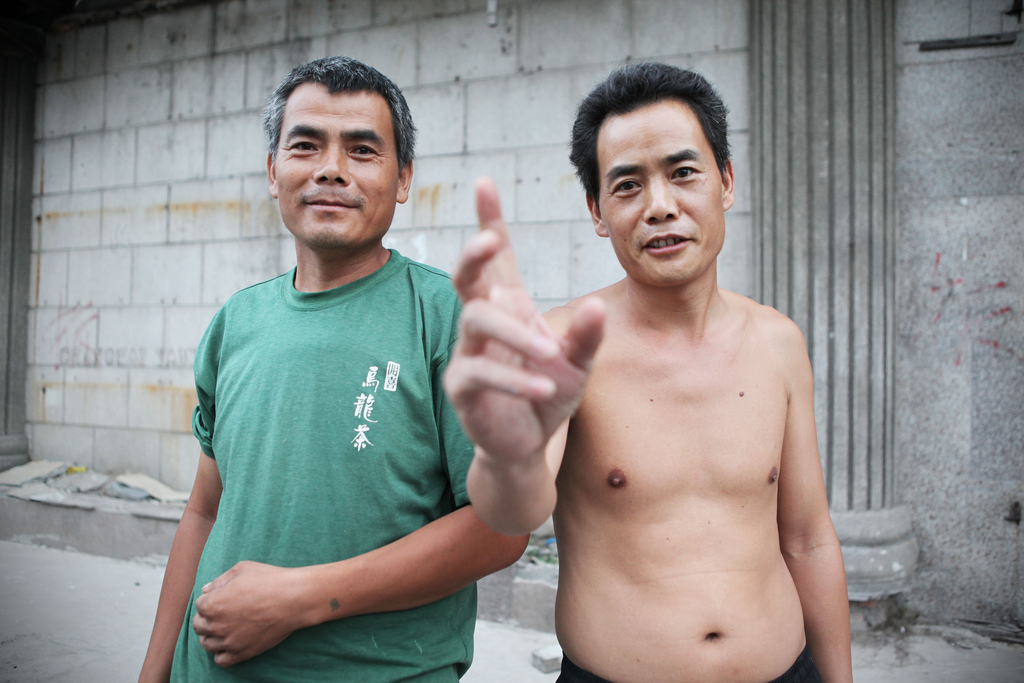 Along a quiet part of Huoshan Lu (霍山路), an old, wrinkled woman was parked by the curb in a rattan chair, quietly fanning herself. Surrounding her were two young mothers and a child entertaining herself with an empty plastic bottle. They were lying on a thin rattan mat as if they were in a grassy park rather than dirty asphalt throbbing with heat.

A few degrees cooler, it would have made for a lovely summer day.

“That’s our mother,” a man waved in the direction of the old woman. “And those are our wives,” another man affirmed.

The Jiang (江) brothers were part of a team of migrant labor from Anhui and Henan, dismantling and emptying all scrap materials from an old factory building slated for demolition. The ground floor served as temporary living quarters, together as a dumping and sorting ground for all the wood, clear glass, mirror glass and all other recyclable waste. In the distance, a group of shirtless men were playing cards and listening to a small transistor radio.

I chatted with them at length, charmed by how similar they looked and amused by the elder (or younger?) brother who peppered me with questions, upon learning that I was from Singapore, how he could move there and make big bucks. “In fact, how about you bring me over to Singapore?” he asked. Everyone laughed.

The following week, I returned bearing 2 copies of this portrait for them. The heat was unbearable and everyone had migrated into the building. The brothers were there, as were their families sans the matriarch. Pleased as punch, his wife pushed an ice-popsicle into my hand. “It’s too hot. Cool down, cool down!” she clucked. I stood there awkwardly holding the popsicle in one hand, camera in the other. Something had to give.

And so, their son, who was eyeing my cold treat, got to slurp down another popsicle. Everyone won.