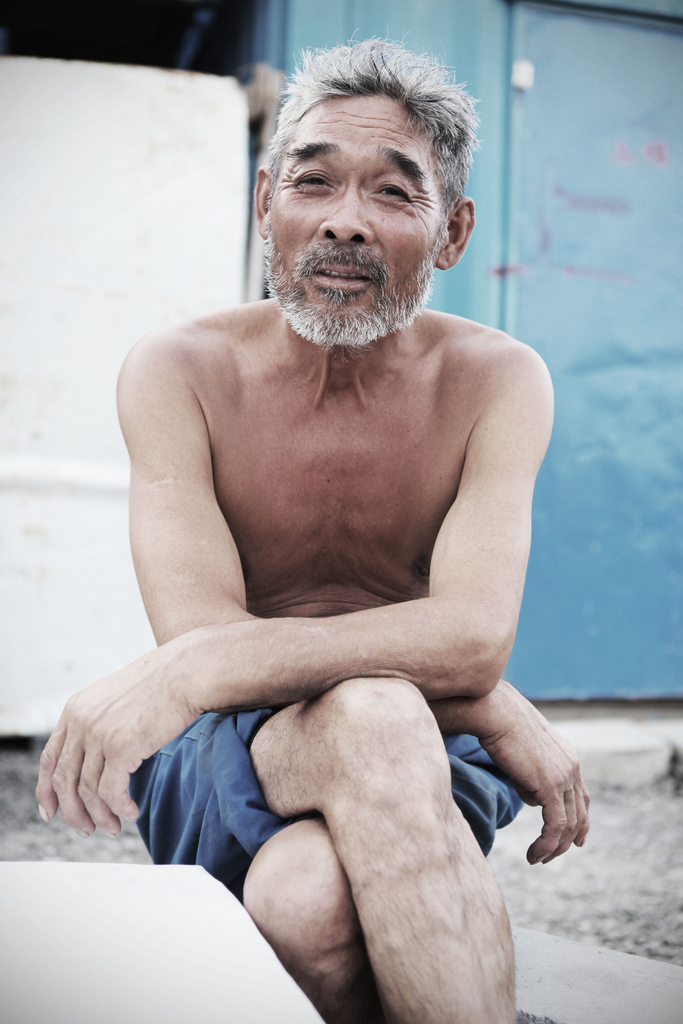 He was sitting alone, surrounded by concrete sand and mud, reading a newspaper on top of a tiny table. Behind him was his home, a large blue storage container which served as temporary accommodations for workers on that construction site.

I greeted him good day. “No work today, sir?” I asked, motioning my camera for permission.

He smiled, his crow’s feet pressed together to form a startling handsome face. I was so struck, not just by his genial disposition but by how perfectly framed his face was by his beard and hair, colored evenly with grey, black and white.

For a moment, I knelt there, mesmerized by his features while he stared back, not so much at me but past my shoulder at something else. I repeated myself, asking if he was enjoying his day off.

Suddenly, a voice boomed out from the side. “Today’s Sunday! We’re not working. What are you doing here anyway?” A large and portly middle-aged man, in nothing but a pair of bright red briefs, was in mid stride to the container when he spotted me. Standing firm with his legs apart and hands on hips, he waited for an explanation while I tried very hard to look anywhere but his underwear.

I didn’t recall what I stammered in response, only the image of the smiling old man who quietly acknowledged my departure.

The street that became a gulf

On a balmy spring day, I had ducked in a narrow corridor to get away from the frantic market activity along the stretch of Anguo Lu (安国路), where…