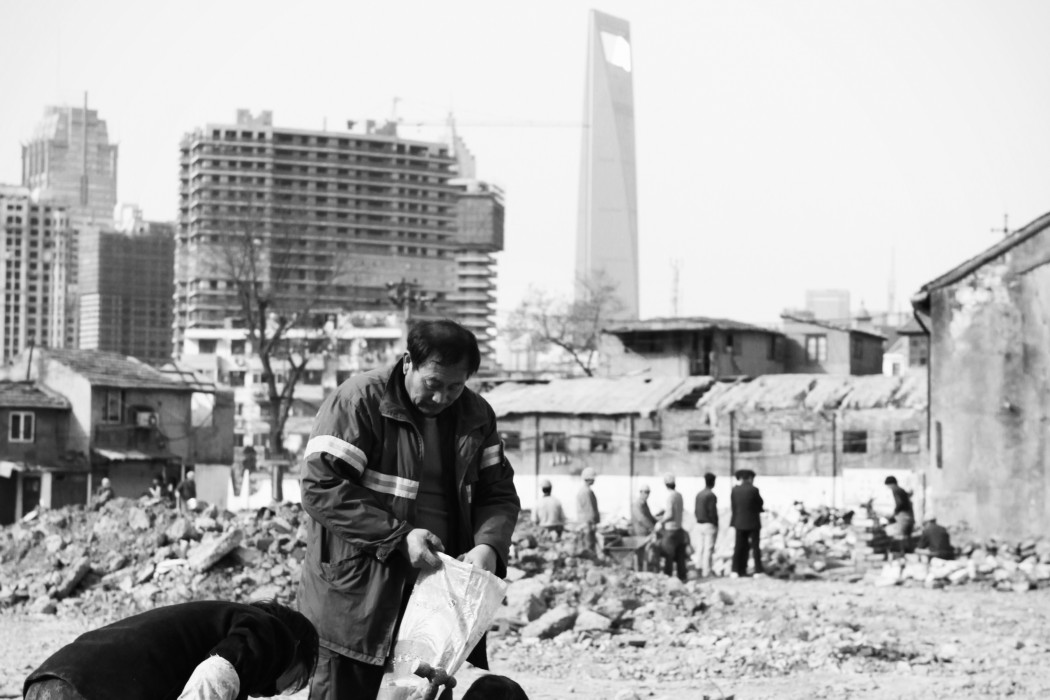 The other day, a woman fell out of the sky and missed me by an inch.

You think I’m making this up?

I was hurriedly striding along the pavement when suddenly, a middle-aged peasant woman from above pounced in front of me and instinctively grabbed me for balance. I did the same but she fell to the ground anyway.

I cursed irrately, my heart still racing from the shock. Was this just a bad accident or was I an unsuspecting support stoop? Bad enough I have to deal with tourists who stop in the middle of human traffic to gawk at the Pearl Tower, and the occasional shovers with nary an apology to be heard. Now, falling human bodies?

The peasant woman had long greasy hair tied neatly in a pony tail and wore a clashing outfit of a red office jacket and jeans, paired with dusty heels. She brushed herself off without a word. That was when I noticed a pile of scrap metal scattered on the floor. I realized she had scaled the wall of a construction site to pick scrap metal for sale. Where profits were concerned, it was a mine field.

Suddenly, I heard a loud clang followed by a thunderous bellow.

Another scraper had thrown a large piece of scrap over the wall without even looking. It barely missed another pedestrian, who was so angry he began hurling verbal abuse at the pair of them. Clearly used to this (disturbingly), they merely picked up their wares and walked away.

I notice them everday now, hanging outside the construction site, occassionally in mid-climb. I’ve stopped walking on that side of the street. Lest more falling metal and women rain on my way home.

The photo above was taken in March 2010 of scrapers in Dongjiadu.

For more stories and news on China’s scrapping industry, I heartily recommend you check out Adam Minter’s work.

Toiling in the heatwave: whither thy subsidy?

His world was a three-block radius. Each day before the sun rose, he would wake from his dormitory bed which creaked from rusty springs. The mattress was thin…