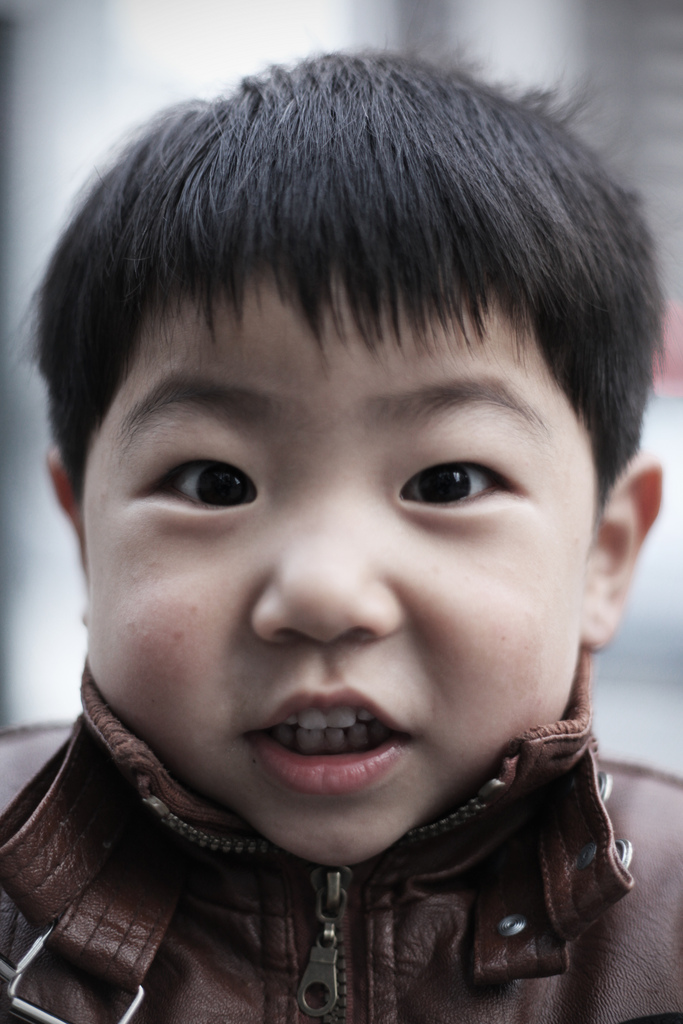 Part of a series of portraits of strangers in Shanghai.

Their parents were more than generous in letting a 50mm lens hover so close to their children and sharing with me, details of how they were spending their day. In Shanghai, you always see a family of 3, rarely more.

One thing I’ve noticed about photographing children in China is the willingness, almost pride, that most parents have in allowing you to do so. Perhaps it is the effect of the one-child policy (not everyone abides by the one-child policy in China, choosing to pay fines for more), that any attention on children is largely welcome.

I’ve seen a fair bit of discussion about privacy and morality issues when it comes to photographing children (in the context of street photography) and placing their photos online in photo forums like Flickr. Many Westerners weighing in, especially male photographers, shy away from doing so for many reasons.

One is the fear of being labeled as some kind of creepy kiddy-fiddler, the other is the general wariness by parents for the very same reason. This has largely to do with the public consciouness of pedophelia cases in the West (not that there aren’t in the rest of the world but cases are recognizably more public in proportion to the societal stigma they carry), awareness of child trafficking and child sex workers in Asia and so on. Terribly grim stuff.

A British commentator remarked in one of the discussions, that looking back to photos from the past World Wars, the best photos showed how civilians adapted to the harrowing conditions of war. The innocence of children, given the times, was an integral element in showcasing the enduring fates and faces of conflict. It seemed a shame that in contemporary times, such pure thoughts cannot exist on their own without being muddied by a darker side.

Too much politically correctness? Where do you draw the line in street photography, of the principles in photographing adults vs children, best when they are completely unaware?

So much electronic ink has been spilled in debating this, that the only conclusion I have is that the individual bears the arbitrating responsibility. Be guided by your conscience and instinct. If at all possible, two rules to abide by is to ask politely and take no for an answer, and extend basic acknowledgment or even offer to send them a photo.

I was quite struck by a recent trip to Shantou and Chaozhou in Guangdong province, of the noticably larger families in Southern cities which have more than one child (Rural residents tend to do the same due to looser implementation).

A Chinese friend explained that it was common for parents to bear a hefty fine (RMB 100k/ USD 14k – a lot for Tier-2 city residents), live modestly, than have restricted family sizes. It could also be the influence of more conservative overseas Chinese with relatives in the South: sons are more important than daughters, two sons are better than one.

But are they happier? I found that larger families had a more relaxed dynamic at meal times and kids were often left alone in houses to run rampant. There is less need to overprotect and more normal for a child to be part of a family unit (extended or otherwise).

A little food for thought on photography in China to kick off the weekend. Do share your views. They are as always, greatly appreciated.