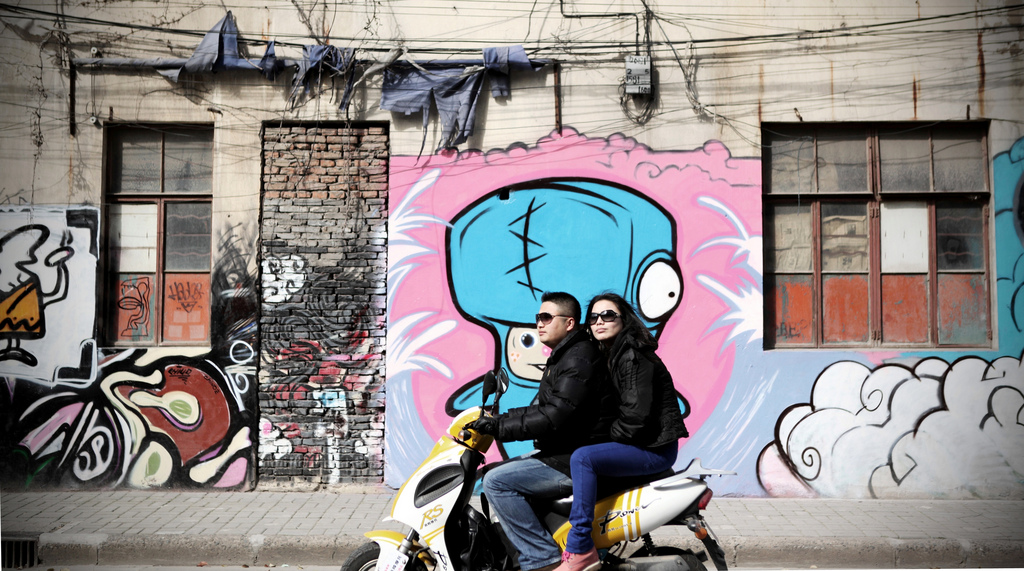 Wandering along the graffiti street on Moganshan Lu, I counted 4 wedding shoots, 3 model shoots, 2 motor bikers (preening and then roaring down the street) and 1 street artist.

His name is Tommy, an American responsible for a few masterpieces along the Moganshan Wall. I caught him just as he was finishing this giant blue … creature, fine-tuning shades and strokes, vibrancy and clarity.

The paint had barely dried when a pair of teenage girls wandered over to pose by it, flashing the ever ubiquitous V-sign next to pouting glossy lips.

Standing with his gear: a paint mask, step ladder, a wheelie bag filled with incriminating cans of sprays and a variety of nozzles, Tommy looked quite pleased with his deed for the day.

“We don’t do this to be famous,” he said at some point.

It reminded me of what Banksy once said, “Speak softly, but carry a big can of paint.”

When he left, I stood at the same spot, capturing the flow of traffic past the wall. Some stared, most were oblivious. They’re too used to the color on that street. But isn’t that the beauty of it all.

“Imagine a city where graffiti wasn’t illegal, a city where everybody draw(s) whatever they liked. Where every street was awash(ed) with a million colours and little phrases. Where standing at a bus stop was never boring. A city that felt like a party where everyone was invited, not just the estate agents and barons of big business. Imagine a city like that and stop leaning against the wall – it’s wet. “ –  Banksy (Wall and Piece)