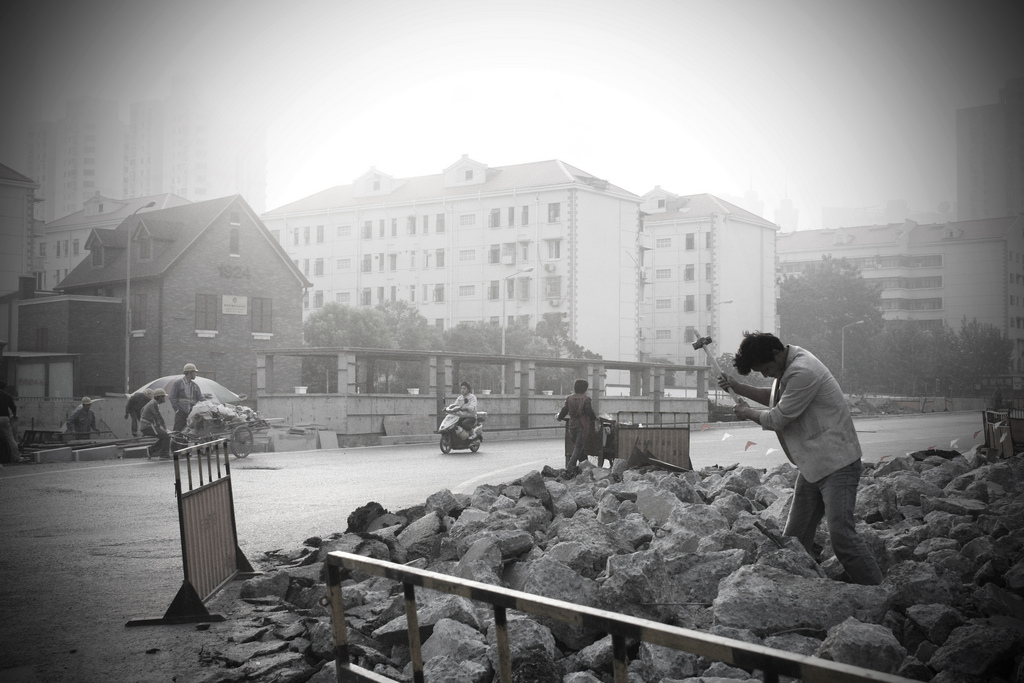 Dawn was just about breaking when I saw him through the haze of cement dust.

In a sea of construction workers milling around for breakfast, this man was off to an early start, splitting rocks by a huge site.

The man seemed entirely misplaced. He had no uniform or hard hat, just a white blazer, dirty jeans and disheveled hair.  A migrant worker being roped to do odd jobs perhaps? Or maybe he was behind in his duties and was forced to catch up during breakfast time.

With each incessant thump, his task seemed futile with his inferior tools against stubborn concrete that refused to break apart. His frustration carried through his tense body and grew with the senseless hammering.

Suddenly, his eyes met mine through the camera lens and burned a fiery red.

“What the hell are you doing?” He growled.

I mumbled a quick apology, sensing that his anger was more visceral than I could handle. There was an inherent rage in him that I felt I had foolishly triggered with my intrusion.

He shifted toward me and I quickened my pace away from him.

That was when he spat in my direction, raising his fists as he broke into a stream of verbal abuse. He cursed and kept cursing. Horrible and vulgar words that came out of his mouth were coated in angry spittle.

The reasons for his anger mattered little. Just that he wanted me to feel his wrath.

The Shikumen Obituaries, Greater Shanghai Map and Reporting on Japan

— Ever wonder what an ongoing obituary for Shanghai’s old shikumen and houses looks like? Xi Zi (席子) has been compiling an ever-expanding photographic list of before and…