There is nothing quite like watching history in movement, the flickering of black and white, and jerky movements of humans and machine caused by the limitation of old technology, to put things in perspective. We can research and imagine all we want but archival footage brings us closer to the event and its gamut of consequence and emotion, especially in times of war and strife.

When I heard that Associated Press (AP) and British Movietone recently released 550,000 video stories dating from 1895 to the present day, I began digging, curious to see if I could access never-seen-before footage. And behold! I chanced upon this incredible footage of the defense of Sihang (literally means “Four Banks”) Warehouse (四行仓库) by the famed “Lost Battalion” of the Kuomintang’s National Revolutionary Army against Japanese forces. This had marked the beginning of the end of the Battle of Shanghai, a campaign that lasted all of four months from August to November 1937 but consumed a million soldier and civilian lives, and set the course for the invasion of Nanjing.

In late October, beaten back by a superior Japanese military, Chinese troops were withdrawing from metropolitan Shanghai to the suburbs. However, General Chiang Kaishek had insisted that troops held down Sihang Warehouse, a fortress of a building that also served as the headquarters of the 88th Infantry Division. More importantly, it sat on the edge of the Suzhou Creek in Zhabei district, then under the Chinese municipality but located in full view of the International Settlement opposite the creek, where safely cocooned foreigners had been watching urban warfare tear the city apart. Chiang wanted the Europeans and Americans in the International Settlement to bear witness and convey Japan’s military aggression back home and secure more global support for China. As if in a perverse theatre, foreign correspondents and diplomats watched enraptured by the intense, fierce and unrelenting assault by the Japanese canon fire which continued well into the wee hours of the morning.

Eventually, exhausted Chinese forces initiated a retreat after foreigners in the International Settlement wrote to the KMT government to cease fighting, fearing the conflict to be encroaching near the foreign concessions. Pressure from the Japanese government had also been a factor for the foreign powers eager to remain neutral. Chiang got the public relations exercise he wanted and the full retreat by KMT soldiers was conducted into the British Concession on November 1 at 2am.

But this exercise succeeded in momentarily lifting the morale of the Chinese military as they eventually lost the war in Shanghai. Sihang Warehouse had been defended only by 423 soldiers, many had been injured or deployed elsewhere yet Chinese commanders had demanded that if anyone had asked how many soldiers were inside the warehouse, “Under no circumstances let anyone know how few we really are. That would embolden the Japanese.” And that’s how the legend of “800 Heroes” (八百壮士) was created, an enduring propaganda for the Taiwanese government (it was the KMT’s military after all) but also for the Chinese Communist Party in the wider narrative of the Sino-Japanese War.

While widely expounded in Chinese, few may know about this siege in English sources. Peter Harmsen paints a vivid picture in his book Shanghai 1937: Stalingrad on the Yangtze, even managing to interview one of the survivors of the Lost Battalion. You can also read more about my interview with Harmsen.

I’ve never visited the Sifang Warehouse before though a quick check on the maps indicate that I have walked around the area while photographing some old lilongs further inland. It sits west of the Xizang Zhong Lu (西藏中路) or Middle Tibet Road bridging the two sides of the water. Now, part of the building serves as a repository of documents, photos and journals from the Battle of Shanghai. Otherwise, it functions as a furniture warehouse and office. 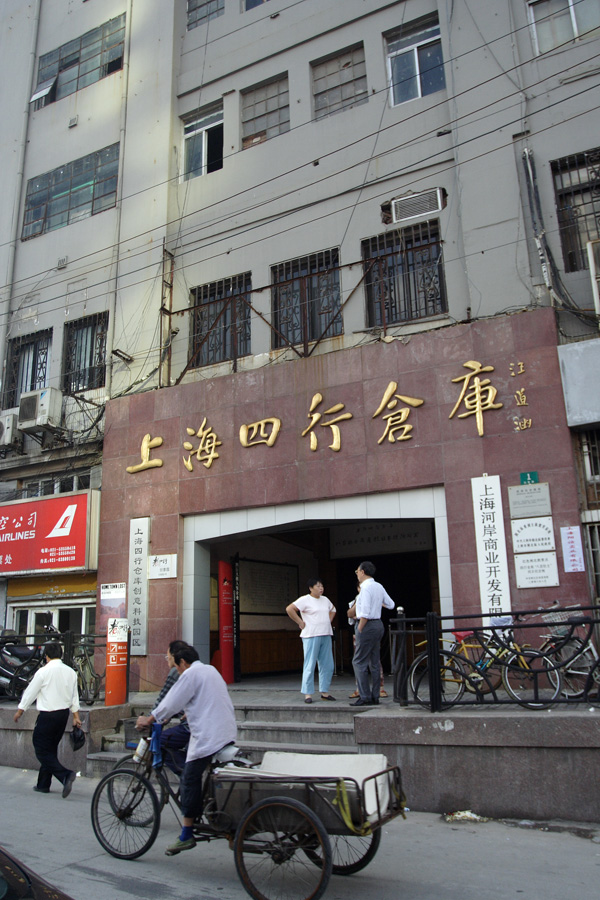