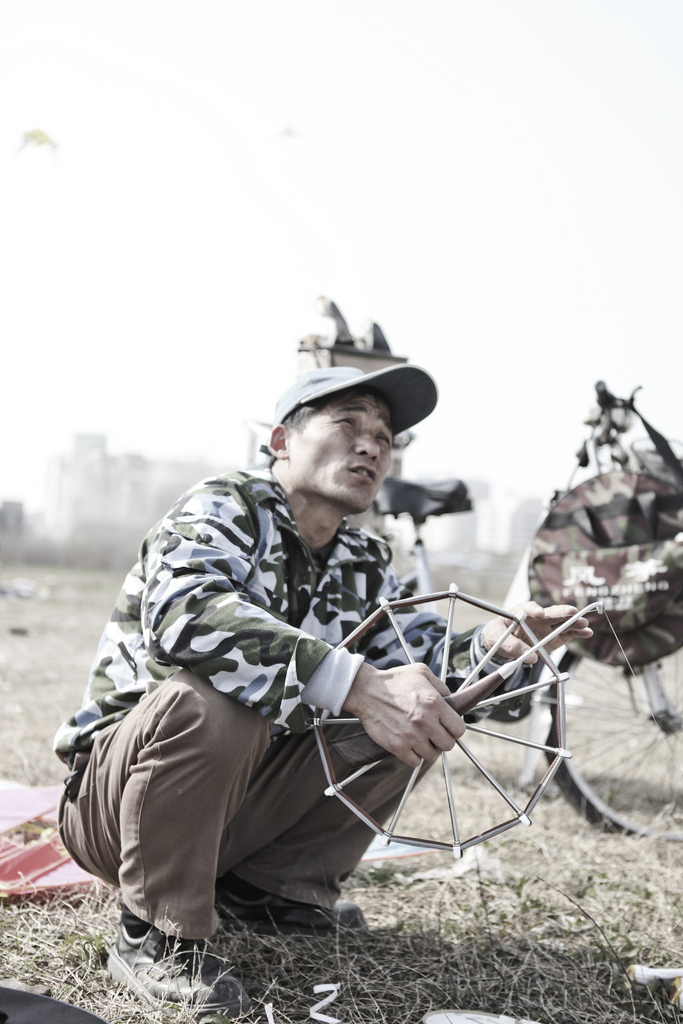 It was a most random yet lovely sight. Spread out over a large field, with tall incinerators serving as a backdrop and passing ships along the Huangpu River (黄浦江) blaring horns in the near distance, a smattering of retired and middle-aged men were flying kites with very interesting paraphernalia.

Chatting with them, I discovered that a core group flew kites every day in the field, barring rain or the absence of wind. They also belong to a special club focused on kite-flying and would even conduct demonstations for their former work units (单位).

They also gathered at sunrise on the Bund to fly their kites until about 8am. “Before the crowds and cars become distracting, ” one man said. “You don’t want your kite crashing on someone’s head, or worse, on a moving car!” Another sniggered, “Or ruin your kite.”

The “leader” of the pack, they teased, was Mr (or Master) Li. Incredibly dapper in a red sweater and a smart tie, he showed me his favored eagle kite. I watched him lay it on the ground and gradually swing the contraption in a circular fashion until the eagle was high enough to soar unencumbered. No forced yanking. Only graceful light steps forward and back to maneuver in accordance to the winds and your own fancy.

It takes a certain skill to fly these kinds of eagle kites, Mr Li boasted and the rest nodded in agreement. You don’t see many people flying these kinds of kites in public parks or the city centers they lack the space.. and skill.

“You could train non-stop for 3 months and you might maybe master the basics,” he said while inspecting his prized paper aves.

Each gentleman has several models to practice, and most craft the kites themselves with patient precision and after many rounds of testing. Many of the men had several stashed in their nifty kit boxes affixed to the back or the front of their bicycles.

After a half hour, three men heaved up from their foldable chairs and packed up their tea and gear.

As they wheeled their bicycles across the field, they waved and yelled, “See you all tomorrow!” and added, ” Depending on the weather!.” Hopping on, they bicycled off in a neat row.

Travelling in Central Asia … be right back

The Toktogul Reservoir in central Kyrgyzstan. Taken on a 10-hour journey by car from Bishkek south to the country’s second largest city of Osh. In case you’ve been…