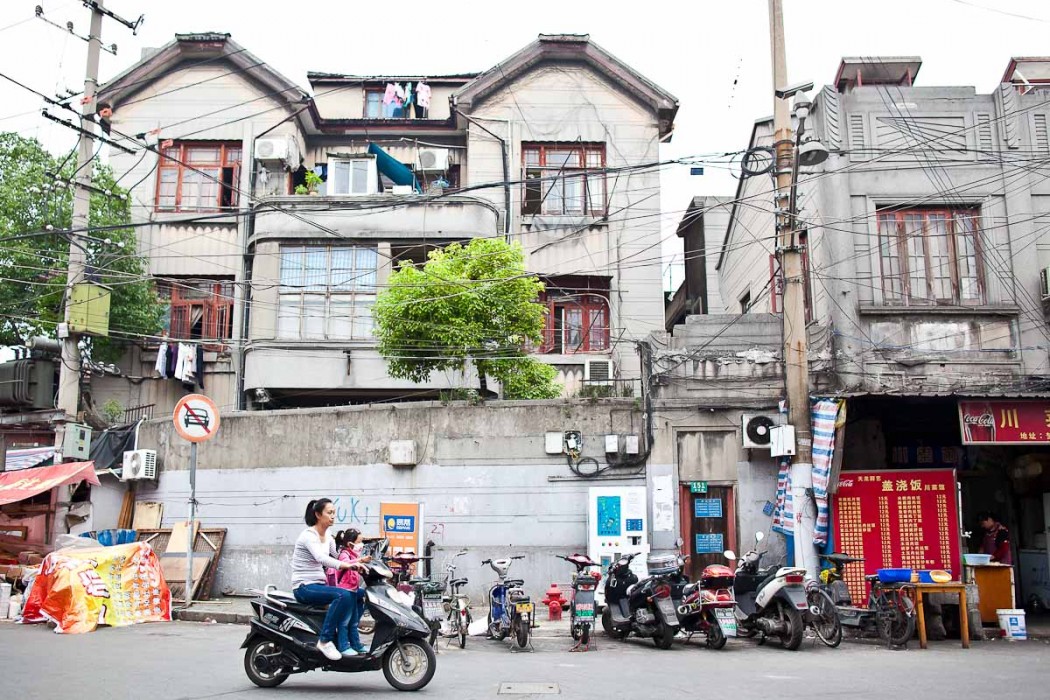 If you look closely, the legacy of Japanese presence in pre-war and war-time Shanghai can be found across the city’s old neighborhoods, dating back to their emergence as a major power after prevailing in the first Sino-Japanese war in 1895, right up to the military occupation that ended in 1945.

I’m not talking about patriotic memorials or museums but evidence of past Japanese lives in old neighborhoods, especially in Hongkou district located north of Shanghai where the Japanese expatriate community flourished in the early 20th century. Along Shanyin Lu (山阴路) in north Hongkou, one alley that originally housed Japanese families had characteristically squat house entrances with sliding wooden screens. In the now-demolished homes around Gongping Lu (公平路), I spied old kanji letterings on doors and Japanese flower motifs carved into beams. Local residents led me up to a fortified roof of an old four-storey building where keyholes were built into raised walls for Japanese canons and snipers. During the war, soldiers would have been able to see black plumes of smoke in the distance where heavy fighting took place along Suzhou Creek.

But nothing is more haunting than the legacy of comfort houses (慰安所) that were created by the Japanese Imperial army for abducted Chinese (along with Korean, Indo-Pacific) women to cook, clean and perform sexual services for their soldiers. As the Japanese military advanced across China during the war, an estimated 200,000 Chinese women [1] fell victim to this terrible fate. 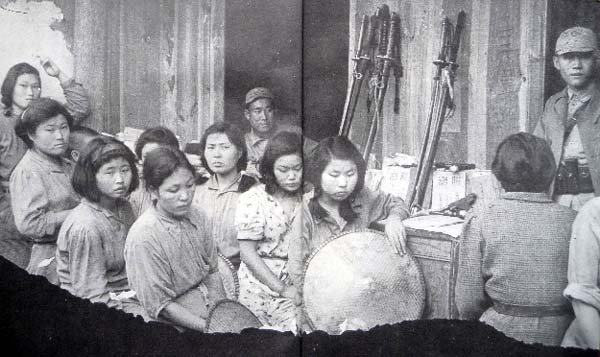 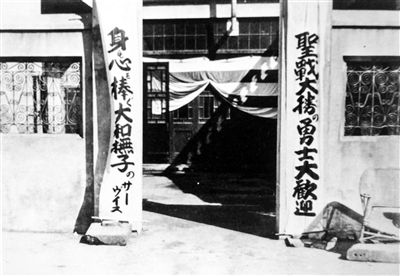 In Shanghai, as many as 158 comfort houses [2] were believed to have existed during the war, the most among all the provinces that the Japanese controlled during wartime, stretching from Inner Mongolia to Guangdong. Housed in former bars, guesthouses, clubs, offices and confiscated villas and lilongs, the comfort houses left no distinct architectural imprint, only a lingering ‘dirty’ air for subsequent residents who moved back in after the war.

One of them is a three-story villa on Menghua Jie (梦花街) or “Dream Flower Street”, amidst a cluster of lilongs (里弄) in Shanghai’s Old Town (see cover photo above). It is located near the edge of where the old city walls that were first built in 1554, ironically to ward off preying Japanese pirates. Little did the Ming dynasty residents know that centuries later, their haven would be invaded and violated within those very confines.

As I was photographing, neighbors were quick to point out the villa’s sullied history as a former comfort house. A lesser known fact was that the original owner, a wealthy capitalist named Lin Guisheng (林桂生) who, in desperate hope for a son to carry on the family’s name, named his abode Ximeng Lu (希孟庐), or “Hope for an Heir”. Lin had likely chosen the character 孟 ‘meng’, meaning ‘the first child’ because it phonetically rhymed with the name of the street 梦 ‘meng’, or dream. 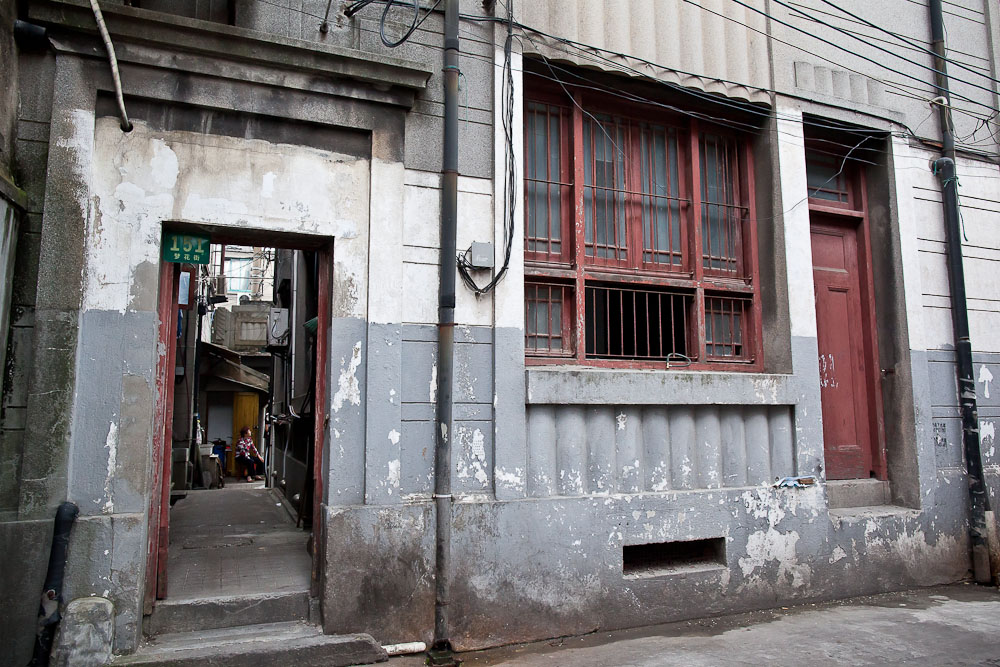 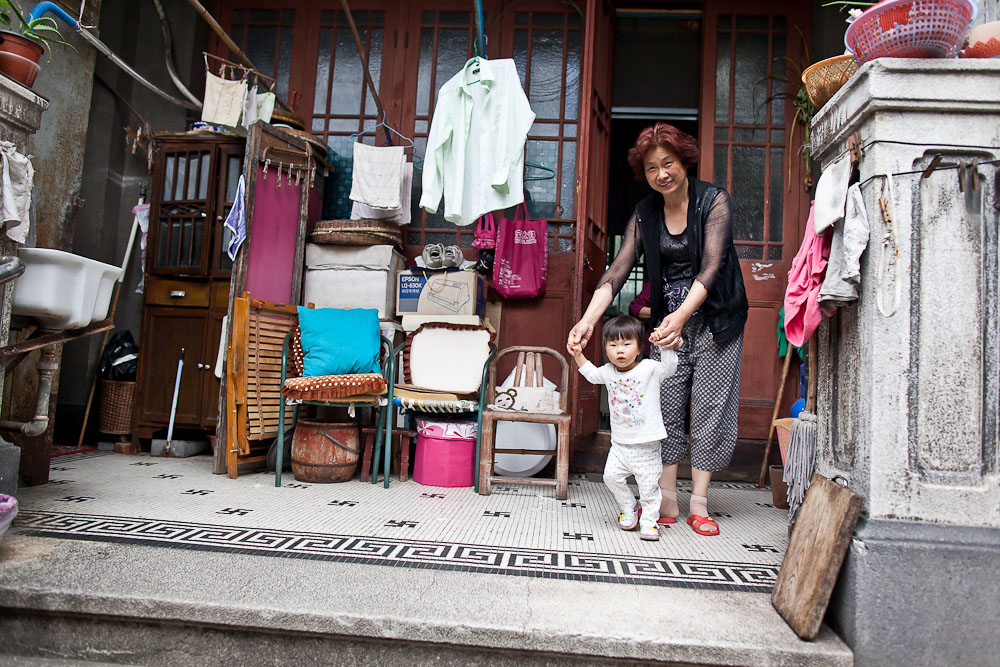 Lin fled to Hong Kong when the Japanese invaded Shanghai in 1937. The property was seized in 1938 and converted into a comfort house to serve Japanese military stationed in Old Town until the end of the war. Signs of struggle against the Japanese are reportedly still visible, evidenced by bullet holes in the wall surrounding the mansion.

A nosy neighbor shared that a descendant of the Lin family still lived in the villa. I thought to seek him out as I climbed up the handsome stairwell that swirled up all three floors but couldn’t bring myself to interfere with the low hum of the television and giggling children behind closed doors. Instead, I admired the intricately carved banisters and sturdy newel posts, unfettered by everyday paraphernalia that were instead, messily draped on walls and in dust-lined cupboards. With so many families now inhabiting the space, the wear and tear was visible. 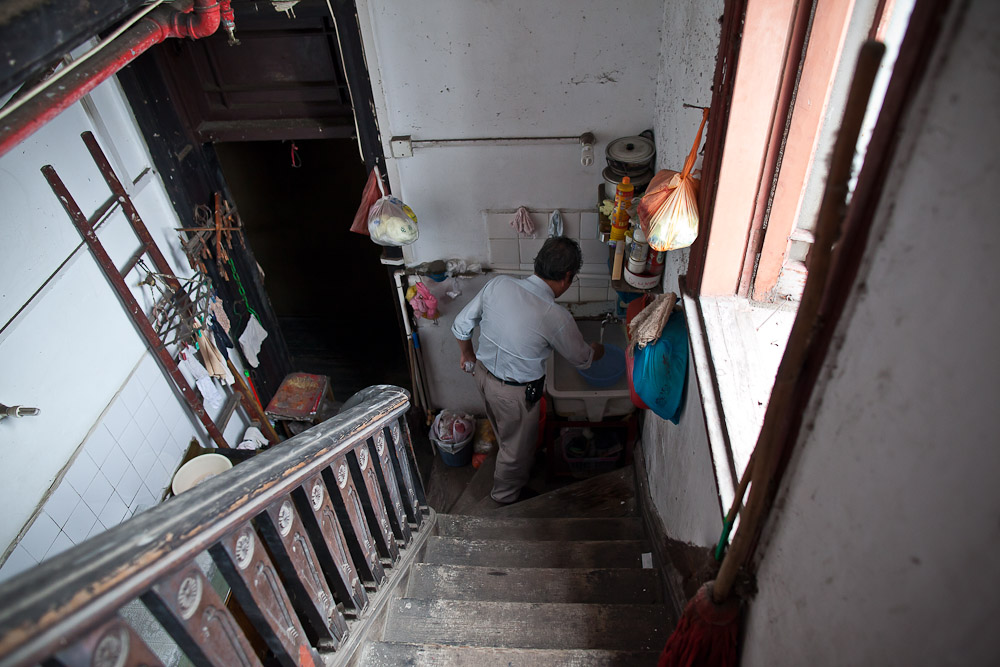 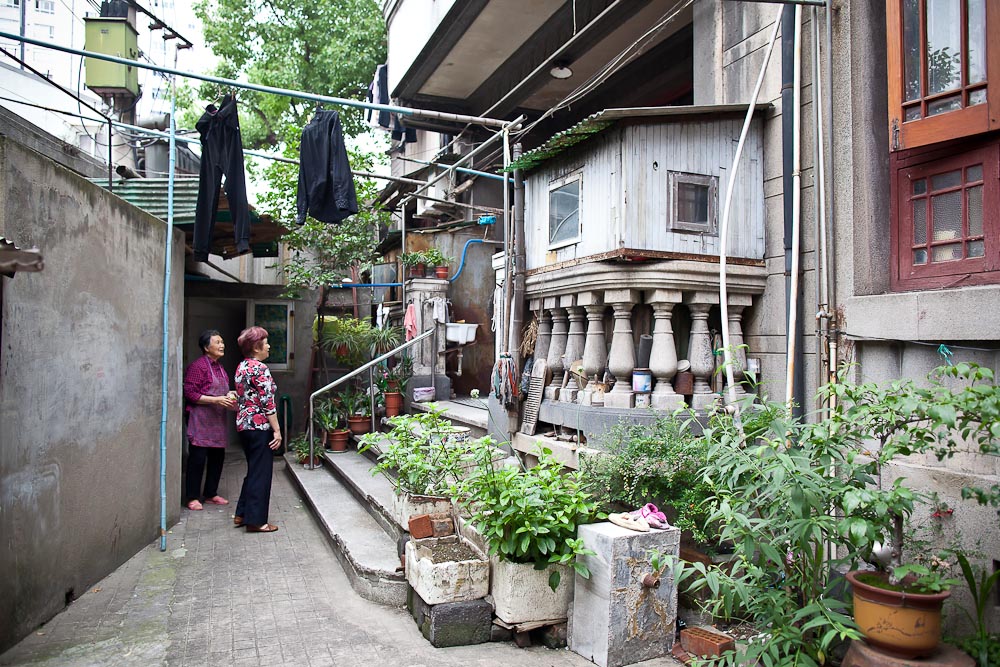 Still, the villa stood imposingly amongst its neighbors and embodied an elegant mix of European and traditional Chinese designs. Small touches of Deco sunburst rays and zig-zag framings lined the edges of the driveway entrance and the interior veranda ceilings. Rounded pillar moldings were a common theme woven across the exterior walls of the house, complimenting the elongated sweep of the south-facing balconies. Part of the interior floors were covered in black and white tiles dotted with Buddhist swastika symbols. Above the entrance leading into the family reception, a pair of beautiful stone lions(石獅) carvings supported the eaves of the balcony overhead, signifying the wealth of its former patrons. 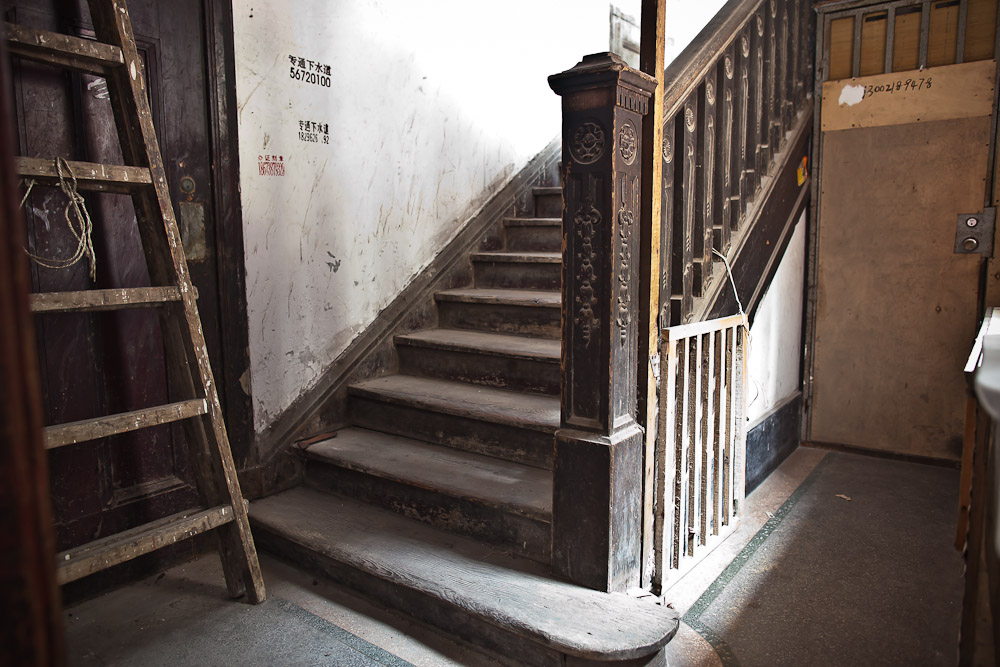 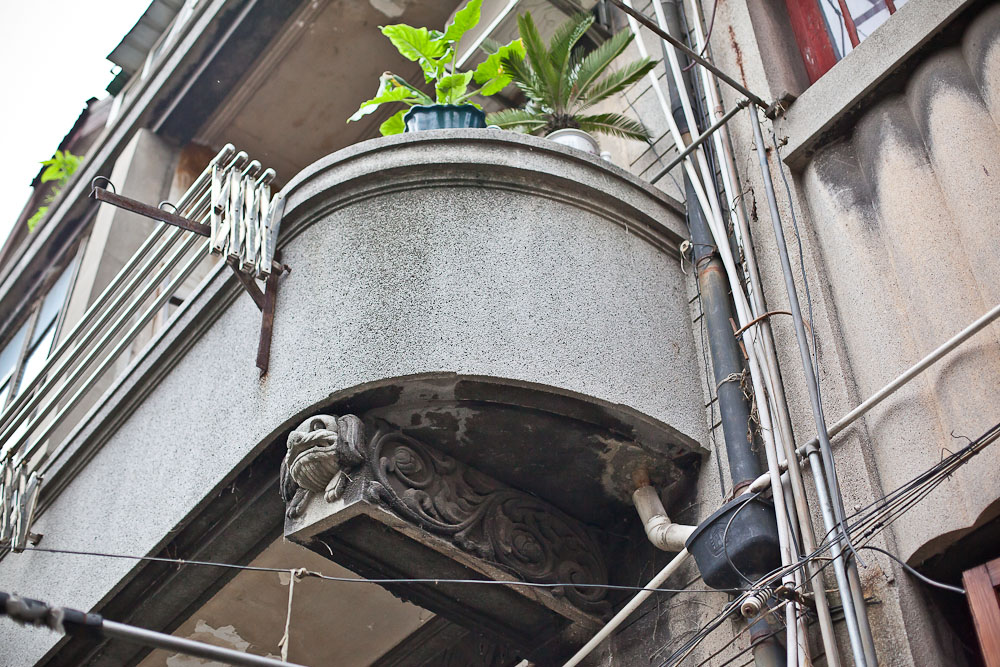 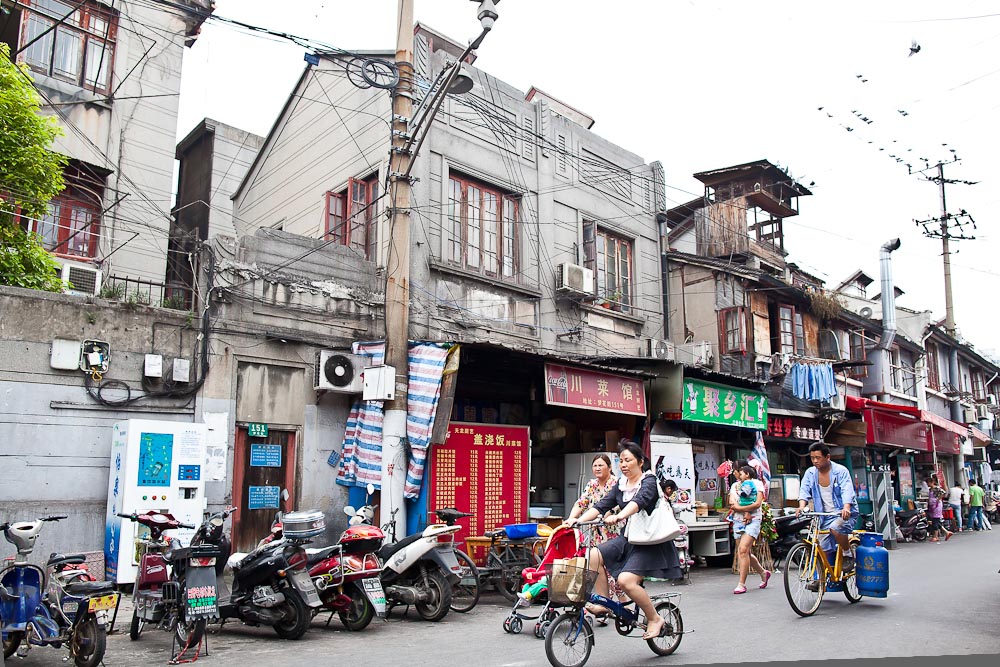 Exploring the aspirational grandeur of the villa, I imagined a typical day in the life of Lin‘s family in the early 1930s: As master of the house, he would receive visitors in the front room to discuss his various business interests, drinking tea on the veranda on a cool summer evening. On the second floor, his wife was likely bickering in the stairwell with Lin’s concubine hovering haughtily on the third floor. With the continued absence of a son, Mrs Lin’s insecurities grew daily at the marital intrusion she had no choice but to accept. Meanwhile, servants bustled in and out of the back of the villa that connected with the rest of the lilong, cooking, cleaning and mending. 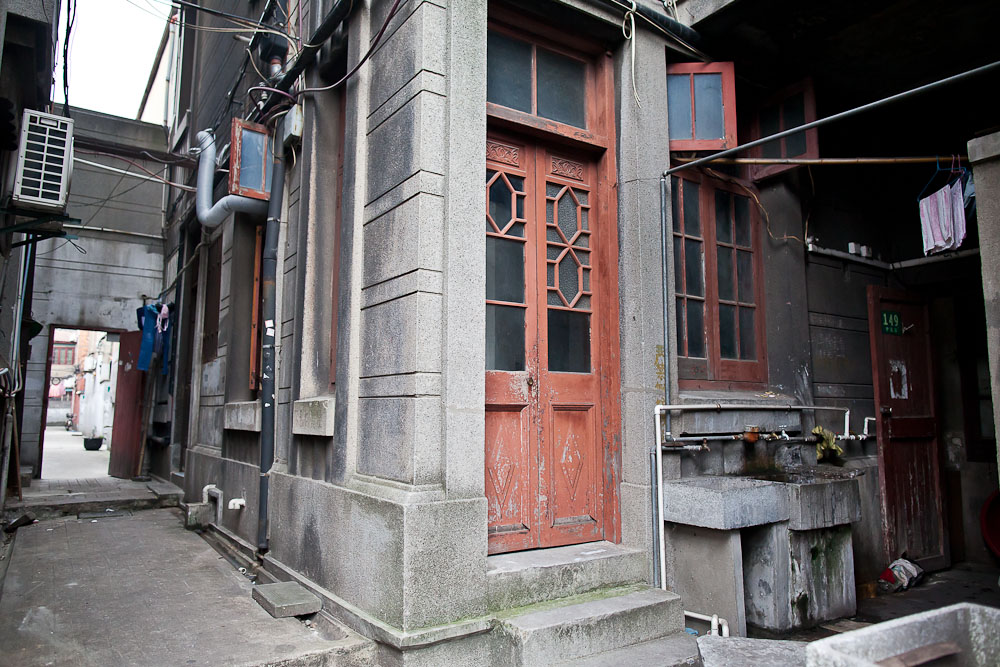 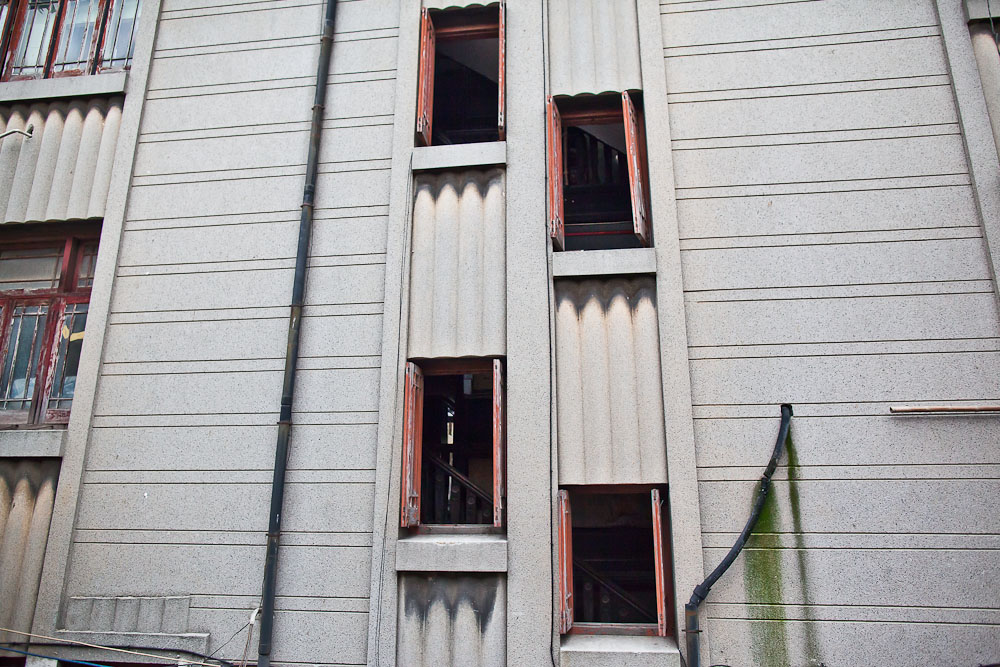 How would it later run as a Japanese comfort house? Archive photographs and survivor accounts described an eerily clinical environment where for low-ranked soldiers; sexual acts were conducted in large dormitory rooms with beds separated by thin curtains. Looks were rarely an issue for the pent-up and war-weary soldiers. The Chinese women were trapped and manhandled. Dressed in cheap Japanese kimonos, they had to endure routine examinations and were fed birth control by doctors who also checked them for venereal diseases. One survivor noted that her doctor would rape the girls after examination. Military personnel had even received accountancy classes on “how to manage comfort stations, including how to determine the actuarial ‘durability or perishability of the women procured.’” [3] 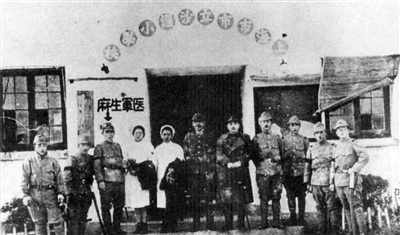 A Japanese clinic attached to a Japanese comfort house. Notation in photo indicates the Japanese doctor Tetsuo Asō who documented many comfort houses and life in the military. Source: Beijing Youth Daily 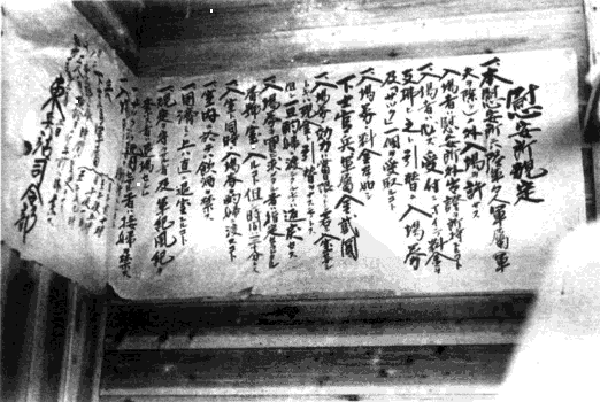 Like any military unit, every comfort house was run in a cold and orderly fashion, against the background of masculine grunts, creaking beds and muffled cries of women who have long lost their innocence. In Shanghai, as assumed in all comfort houses across China, strict rules were displayed prominently to regulate soldier behavior, less in consideration of their victims but to enforce military discipline:

Looking back at the villa that was born out of Republican wealth and rooted in a desire for an offspring, I wondered where the set of Japanese comfort house rules would have been placed. In the entrance or on every floor?

As I descended the stairs one last time, examining the deep nicks on old wood and feeling the cold press of the walls, I couldn’t help but wonder if the war-time ghosts were truly exorcised.

1. This is the most consistent as noted by according to the Chinese Comfort Women Research Center at Shanghai Normal University and Washington Coalition for Comfort Women Issues. Other Chinese sources have estimated it as high as 360,000 to 410,000.

Take To The Street (part 1)

The weapon of choice is a 35mm f1.4. The rule, and the only one of the day: no looking through the view finder. Shoot from the hip, the…