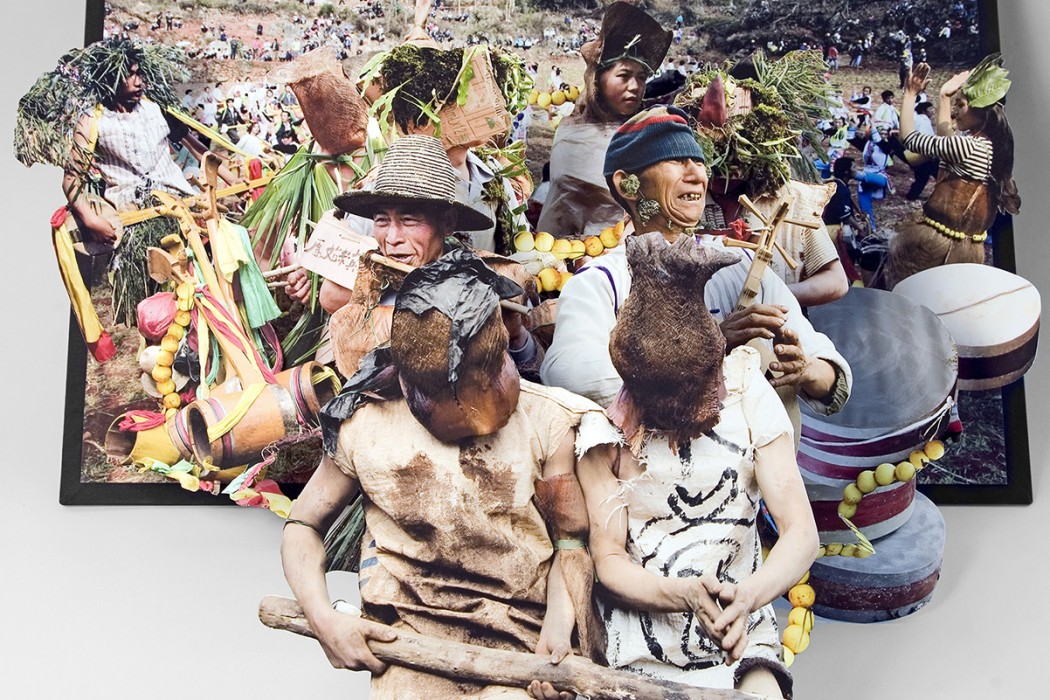 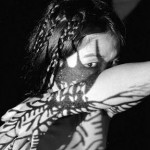 Colette Fu’s photographic pop-up art books are nothing that I have ever seen. The first time I opened one of them, they didn’t just rise predictably and vertically into the air but popped out at you like a jack-in-the-box offering you a lollipop – full of life and vibrant colors. The American artist first reached out to me via the blog’s Facebook prior to her arrival in Shanghai for an artist residency at the Swatch Peace Hotel. Over the months, I’ve had the pleasure of learning more about her work processes and inspirations, as well as her cultural background as a descendent of the Yi minority in China. I’m glad to finally have a chance to feature her work here. Colette also has a pop-up art installation in Shanghai running through August.

SA: You started out as a photographer but what compelled you to transition to creating pop up art? It doesn’t look easy, what with all the mechanisms of complicated folds and pull tabs. Did you feel it made your artistic vision more complete?

CF: In college I created two-dimensional collages with my photographs. The work was displayed in large, heavy lightboxes. I searched for a way to make my collages portable yet three-dimensional. It was at the children’s section of a bookstore where I was introduced to some elaborate pop-up books which I eventually purchased to take apart to learn how it worked. I read about the history of movable books, how they were originally used to illustrate ideas about astronomy, fortune telling, navigation, anatomy of the body and other scientific principles. This prompted me to construct my own pop-up books reflecting ideas about how we relate to society today.

My initial pop-up work was more abstract, with underlying themes of consumerism and the body in a modern world of excess. But since 2008 my personal focus has been on work about the lives of the minorities of China, not far removed from my previous work.  I discovered that my own personal anxiety was in part due to the lack of respect and connection to my own cultural identity. The pop-up book format allows me to create my own categories in another dimension and reveal things beyond what one expects when looking at the cover. 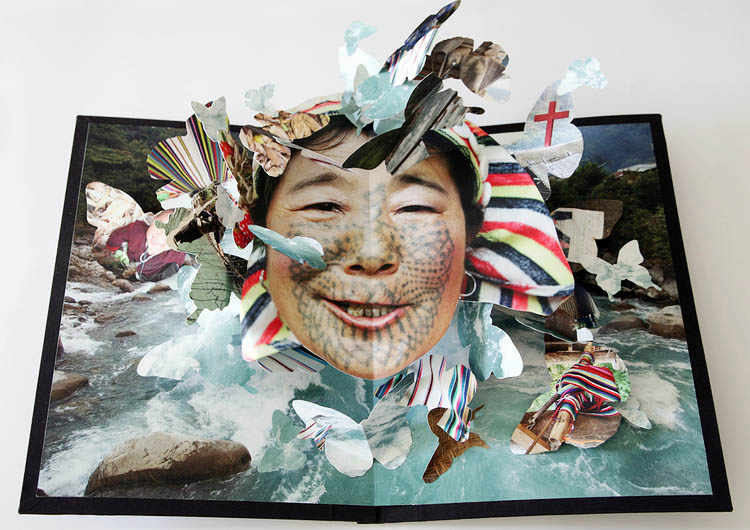 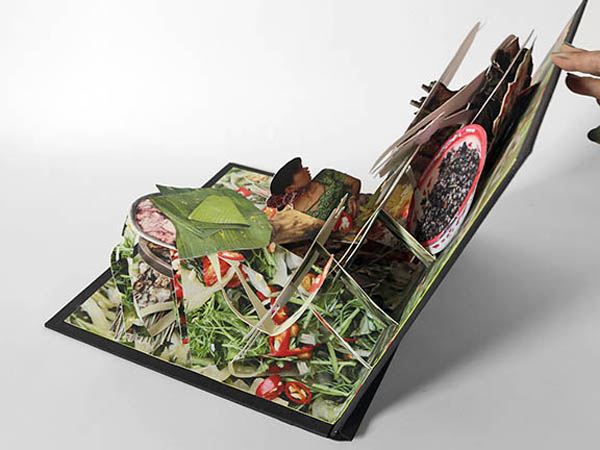 SA: I was intrigued by photos of your book “We Are the Tiger Dragon People”, which features a stunning portrayal of Yunnan province’s diverse and colorful minority tribes (25 out of China’s 55 minority tribes reside there) Nothing quite prepared me for an actual pop-up that is unveiled to me, I was just floored by the beauty and complexity. How do you feel your works contribute to the general narrative and portrayal of China’s ethnic minorities, especially the Yi minority?

CF: In 2008 I was awarded a Fulbright scholarship to create photographic pop-up books of the ethnic minorities of Yunnan province. That year I traveled by foot, tractor, zip line and bus to more than 50 villages to take part and document rituals, festivals, culture and everyday living. As a woman who is a member of the Black Yi minority from China but raised in the US, my identity is multi-layered and multicultural. Growing up I denied my Asian heritage for fear of being different, and tried to blend in as much as I could with the predominantly Caucasian community within which I lived. Through my artwork, I want to change the perceptions of what one “expects” to see of China, of women, of ethnic and cultural differences and allow people from within and without these communities, or access to them, to expand their understanding.  These ethnic groups have customs, histories, religious practices, languages and lifestyles that greatly differ from their majority Han neighbors. While I am unable to directly help these groups preserve their identity and ways of living, I use my skills as an artist to spread knowledge and provide a brief portrait of their existence.

I have spent a lot of time with my Yi relatives but find that the more intimate I am with people, the harder it is for me to photograph them.  I have yet to understand why; perhaps they pay too much attention to me. 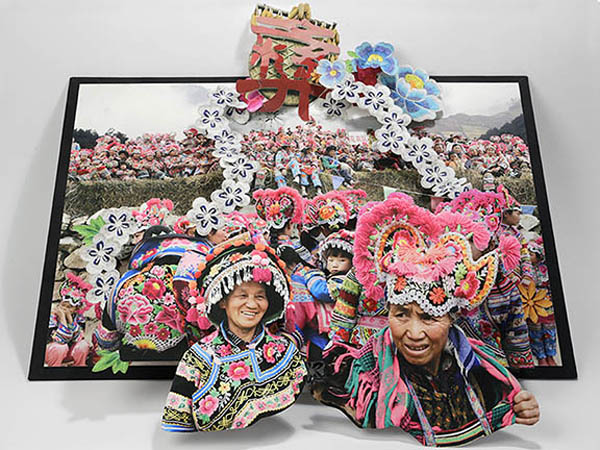 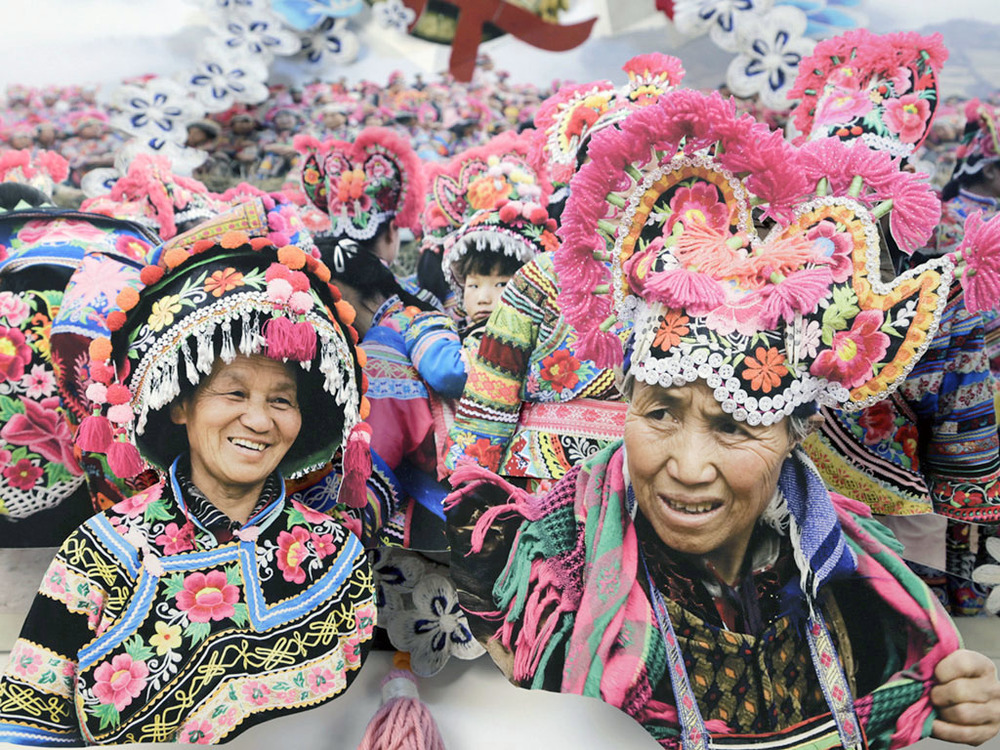 SA: I love the incredible story of how you discovered on your travels that your great-grandfather (Lung Yun 龙云) was a governor and general of Yunnan during the transitional years of WW II. And that you met many distant relatives while traveling in Xichang, the capital of Daliangshan. You even visited your great grandfather’s hometown in Jinyang. That must have been an incredible journey. How has this shaped your work and identity? 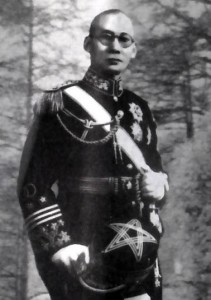 CF: I first went to Yunnan, China in 1994 as an English language teacher. I taught at Yunnan Nationalities University in the captital, Kunming, where students were from different minority groups within the province. I fell in love with Yunnan and stayed there for three years; it was these experiences that helped me find a new sense of pride and identity and encouraged me to pursue a profession as a photographer and artist. I returned to the US to formally study photography with a goal that I would be able to someday return and work on a photographic project with the ethnic minorities, particularly the Yi.  Fulbright gave me that opportunity. As I grow older I start to understand the importance of preserving one’s identity and culture, and the significance of learning about one’s roots.

Growing up in New Jersey I was not proud of my Chinese heritage; I peroxided my hair and tried to alter my appearance to seem less Chinese. I studied hard and my father was very strict. I was consumed by the pressure of stereotypes and unrealistic expectations from my family, friends, and community. Physically I was bigger than most other Asian girls and had wavier hair and darker skin. In Yunnan, I found people similar to what I saw in the mirror; they didn’t fit the stereotypes, the archetypes, the categories that I was taught were “typically” Asian. This recognition sparked a new sense of identity, pride and acceptance. Art has given me an opportunity to express and resolve my conflicting emotions. And constructing pop-ups allows me to combine intuitive design and technical acuity with my love of traveling and helping others as I try to understand myself and the world around me. Recognition and celebration of diversity in others and ourselves leads us to stronger identity and involvement with the world. 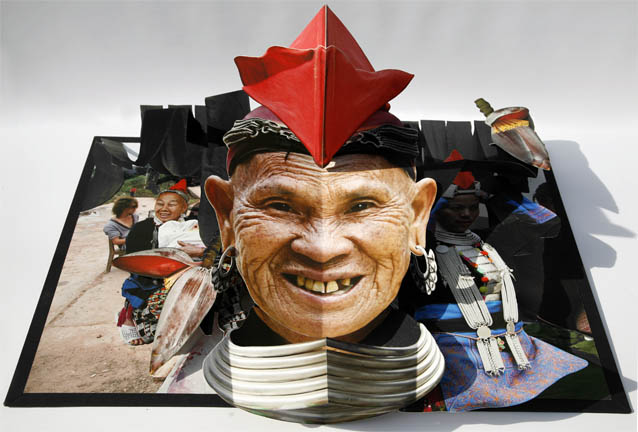 SA: You’ve been an artist in residence at the beautiful Swatch Peace Hotel for almost half a year now. Has the city fired up your creative juices?

CF: Living in the Swatch Art Peace Hotel has been an amazing gift where 18 international artists are pampered in a 5 star hotel.  I enjoy the luxury and ease, which has made it easier to travel to remote places outside of Shanghai. I make a couple of trips every month and look forward to returning to the hotel to work and reenergize for my next trip. To know that Swatch supports and treats us so well motivates me to work harder. This has been my 19th artist residency and my favorite by far.  I find that I am more productive in a city and draw energy from the sounds of people and traffic below on Nanjing Lu. The lights coming from the Bund and watching the boats pass at night are very inspiring. 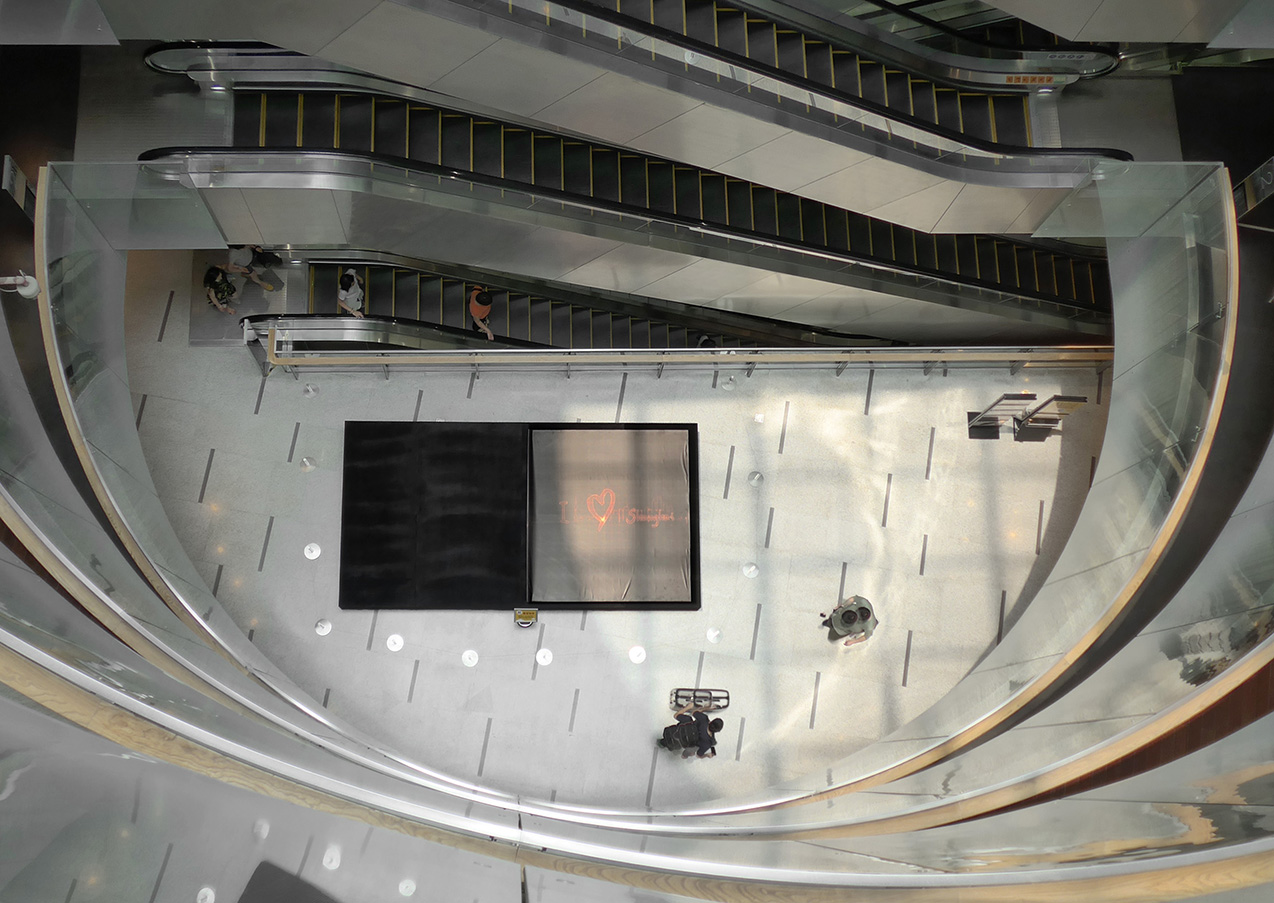 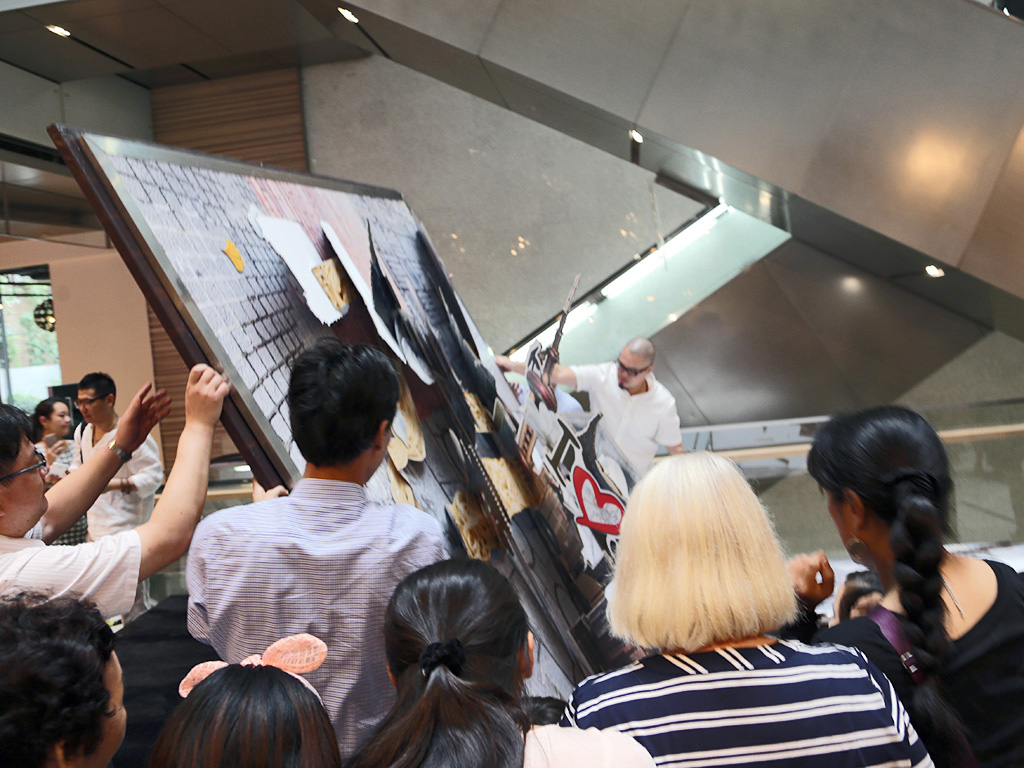 SA: You created an installation pop-up on Shanghai for your exhibit at the Reel Mall. Can you walk us through the process of how it came together from design to the final assembly?

CF: Shortly after arriving to the residency, Jason Chen, a Shanghainese entrepeneur approached me to help him create a large pop-up to coincide with a pop-up book exhibition debuting at Reel Mall.  We have a wonderful view of the Pudong skyline from our roof. This inspired me to make a pop-up of the Bund and to incorporate elements that I thought represented Shanghai. As a newcomer to the city, this was difficult as I hadn’t been to most of these places yet.  Jason let me decide what elements to include as he was curious to see how Shanghai was viewed from a western, or Chinese American point of view.

Designing the book got me out of the studio and to bike around the city like a tourist. I traveled around the city photographing the elements and made a small model that a factory later manufactured on a larger scale.  The final size of the “I Love Shanghai” pop-up book measures 2.5 x 5m with a height of 1.7m. We believe it is the largest pop-up book ever created in China. 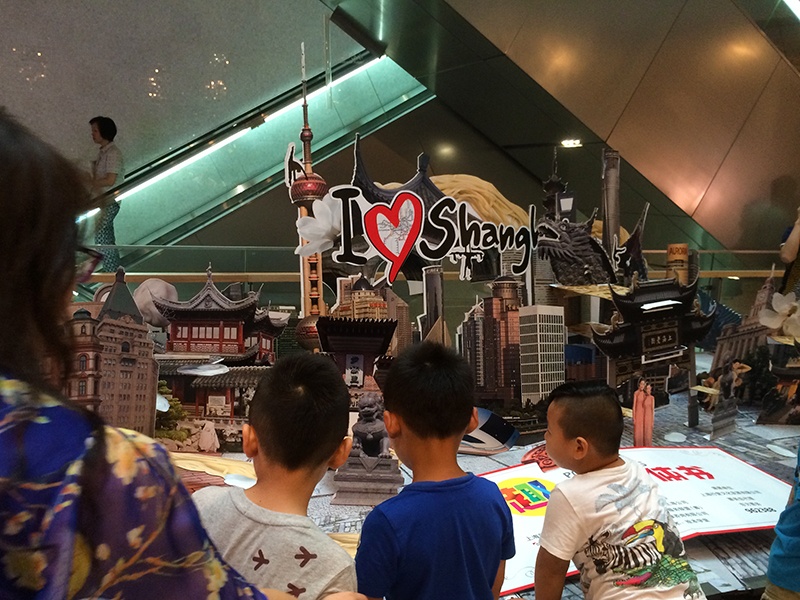 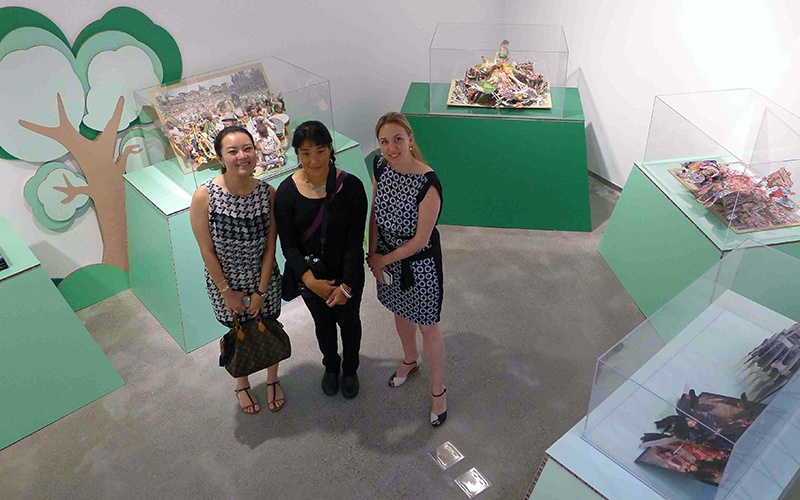 All photos provided by Colette Fu

The Chinese tourist in Shanghai

“Come on a cruise on the Huangpu River! Buy your tickets here!” a pimply teenager in a sweat-soaked vest droned loudly into the bustling crowd, “Our deals offer…