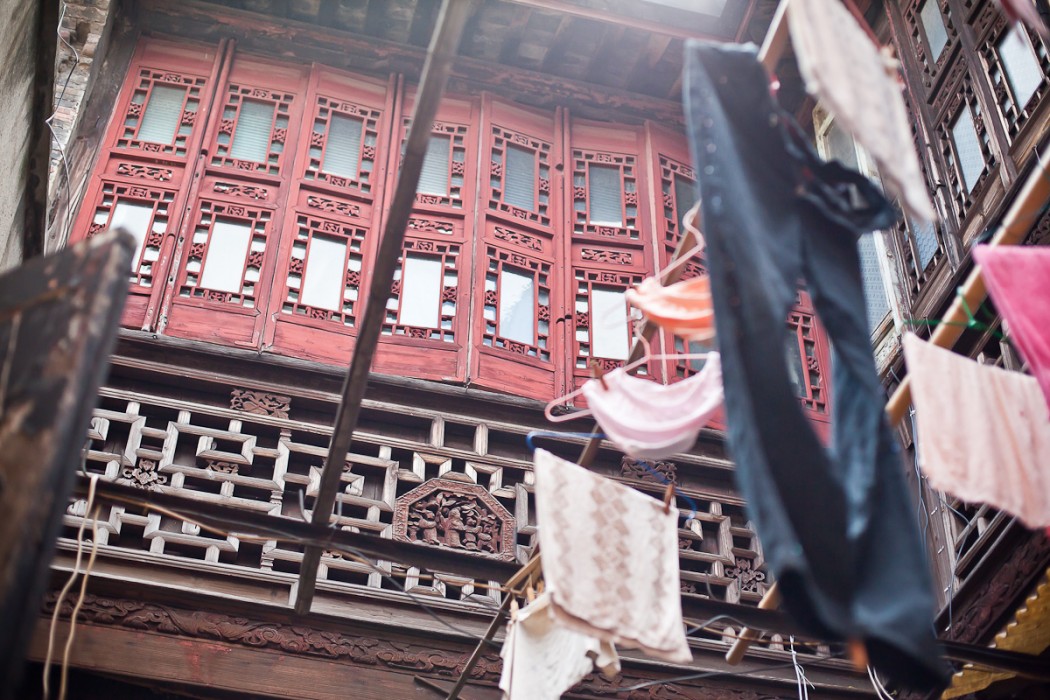 In my few years of photographing old houses around Shanghai, I have never been this buoyant over lattice woodwork in its original setting.

Perhaps it was a mix of fatigue and earlier disappointment that created this well of emotions. I was dismayed to find a particular shikumen on Kongjia Lane (孔家弄) (or more loosely “Lane of Confucius Home”), which I had hoped to photograph, scaffolded for “refurbishment”. Tired and sweaty, I had walked for hours through Old Town (老城厢), wearing the smells of a neglected lilong neighborhood; an odd combination of sweet fried fish, wet laundry and rotting trash.

On my meander home south of Kongjia Lane, I spotted an unassuming entrance into a shallow lane, no more than three shikumen houses deep. Inside, a trio of women was seated in low rattan chairs, lounging in summer pajamas.

I nodded at them briefly and peered into the first open courtyard. I expected the usual scene of clutter and gutters that I had observed across Old Town all day. 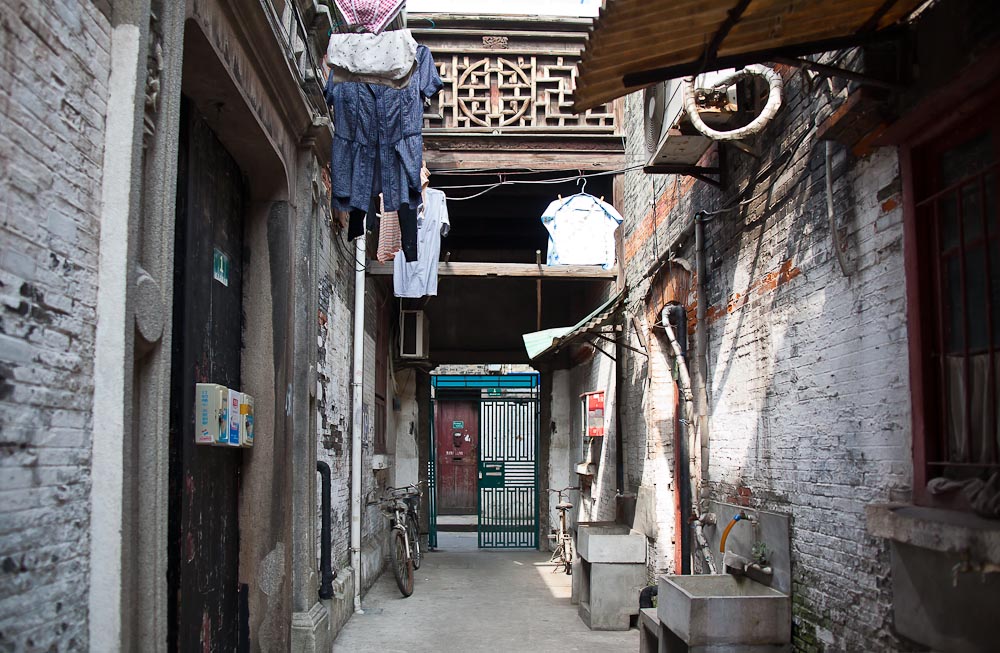 What greeted me was a spacious courtyard surrounded by dark lattice woodwork on the second floor, topped with handsome panel windows, crimson red on one side, brown on the other two sides. Equally elaborate pillars on both corners were adorned with similar-patterns.

My heart skipped a beat. All I could think was: more, I needed to see more.

Before I stepped into the courtyard, I turned to the women who were now watching me.

“May I …?” I ventured. They were likely just neighbors but securing their consent was sufficient to cross the landing.

After inspecting me from head to toe, a middle-aged woman who wore a bouffant waved me in.

As I pushed the heavy doors wider, I marveled at the details, my heart sang at the completeness of the architectural details and its unusually well-preserved state.

An octagonal inlay was set in the centre of the lattice panel, an elaborate carving of what could be the three immortals – fulushou (福禄寿), the auspicious triad of Good Fortunate, Longevity and Emolument. The surrounding woodwork were continuous backward swastikas, a graphic representation of “ten thousand” Chinese character, or wan (万), that spoke to continuous ongoing movement.

Dotted across the lattice and windows, and running along the eaves were more emblematic elements symbolic of longevity and prosperity including ornamental cloud patterns, stylized bats that resemble butterflies and flower blooms. 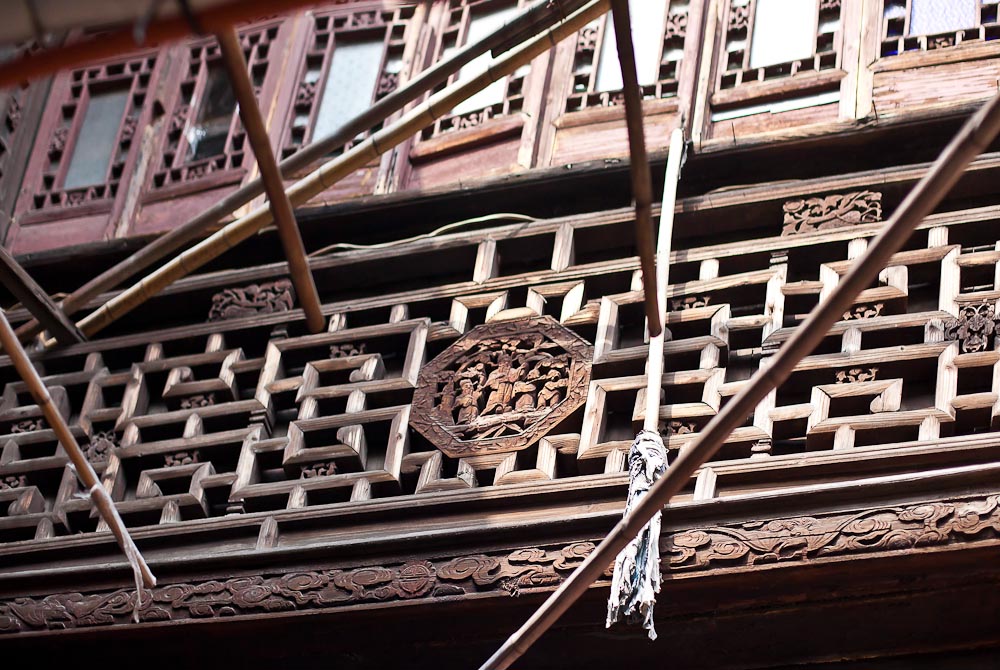 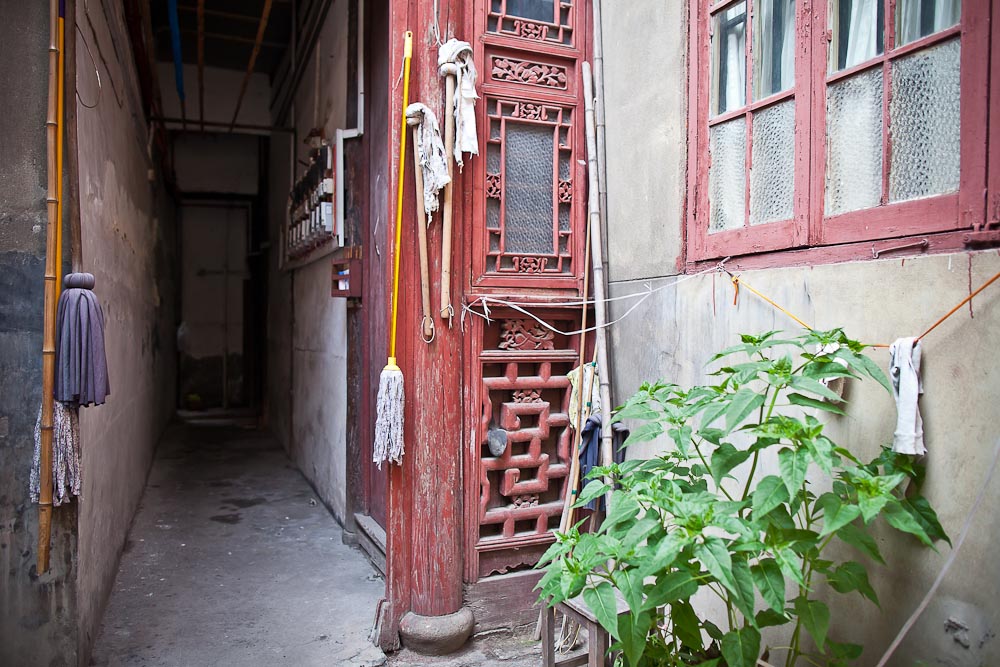 The tenants had made a concerted effort to keep the woodwork and carvings intact. Even the mess of hanging laundry and sheen of cheap paint could not hide the beauty of the details.

Unfortunately, the rest of the house appeared not to have enjoyed similar care. Where the family reception room would have originally been in a shikumen house, walls had been erected to carve out a room. Behind the vinyl windows and lace curtains, the television was on a low murmur. Walking deeper into the house, I observed the mosaic tiles on the floor had eroded into shiny stone while dark corners hid hastily assembled kitchen stoves and more clutter. Thick layers of cobwebs and dirt were wedged deep into crevices of the banisters along the stairwell. 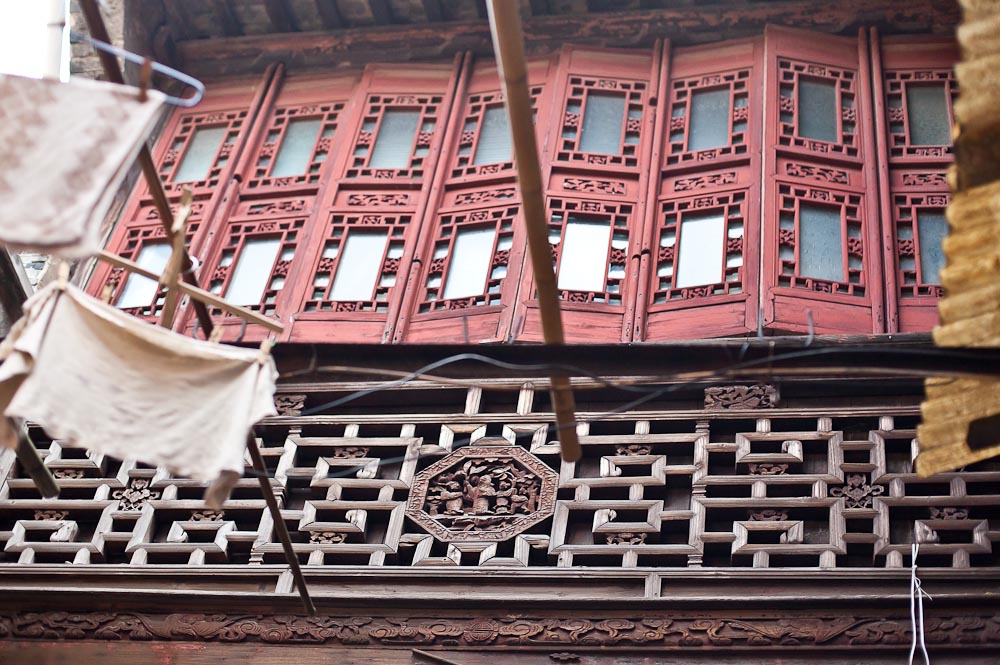 I asked the neighborhoods if they knew of the origins of the alley. The bouffant shrugged.

“All I know is that a descendant of the family who originally owned the house still lives there. Their ancestors were capitalists of course, but even the children do not know much about the history. I’ve been living next door since the 1980s, no one talks about it.”

An elderly Shanghainese woman was napping in a fold-out chaise. She murmured at the bouffant. Shouting loudly into the old woman’s right ear, the bouffant repeated our conversation. The grey-haired elder turned towards me and mumbled something incoherently. I noticed her eyes were slightly milky from cataract.

Sensing there might be more, I wondered out loud if I should speak to the family myself. The bouffant said discouragingly, “You could try but they are not in right now.” She gave me an even look, “Maybe the family pretends not to know. Have you thought about that?”

I let her words hang between us before quietly exiting the lane.

I later discovered that my friend Katya Knyazeva had managed to speak to the wife of the descendent (son) who was less inclined to share what must have been a painful background.

“Sweet Mrs. Yu allowed us to photograph inside and told the story of the house, on behalf of her reticent husband. After three wealthy brothers Dong (董) made their fortune in the early 20th century, they built this magnificent three-part courtyard. Each brother’s family occupied one part. After the war and the Liberation, the only descendant of the Dong clan that still lives in his ancestral home is the retired Mr. Dong. He and his wife occupy two rooms on the second floor, overlooking the stunningly beautiful woodwork in natural browned tones. When the neighbors across the courtyard moved in, decades ago, they painted their windows red (they had just married).” 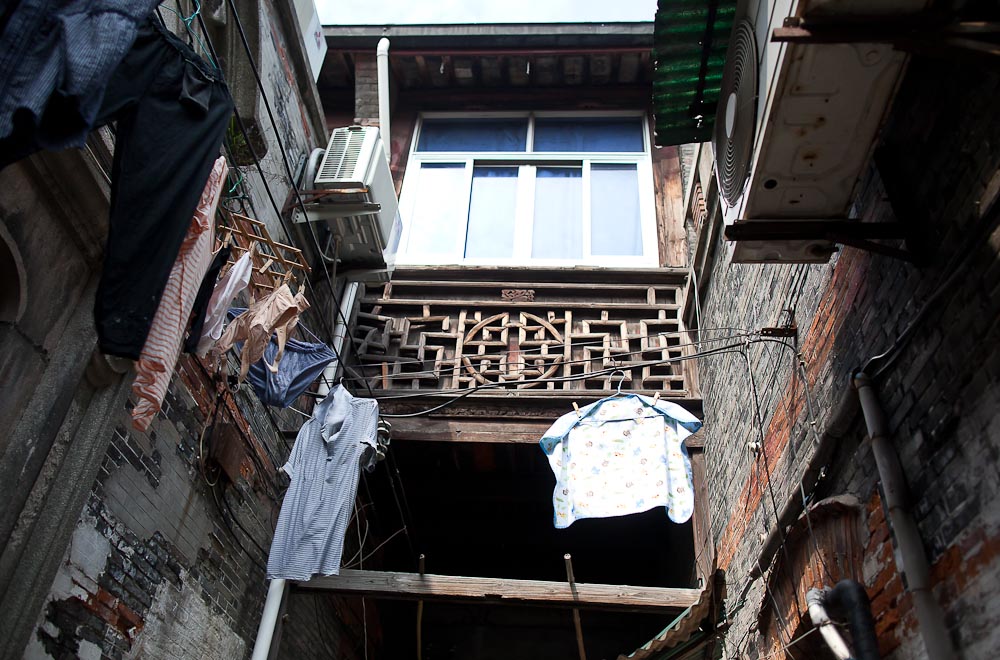 As pockets of Old Town degenerate into near slum-like conditions, poorer (and usually very old) Shanghainese, together with migrant workers, would sacrifice delicate architectural features in their homes to cope with the ever-growing needs of the community at large. Boundary stones were paved over by concrete slabs to prevent flooding, vinyl plastic windows were fitted into old wooden frames to keep out the damp Shanghai cold, and walls were erected to create extra room out of what used to be open-spaced pavilions.

But the day’s discovery was a reminder of how a bit of care went a long way in reflecting the beautiful history of Old Town. Even if few were willing to talk about it.

Because the Street Belonged to Her

She was jaywalking in the huge intersection under the light patter of a persistent drizzle. The traffic warden yelled out to her to return to the curb as…