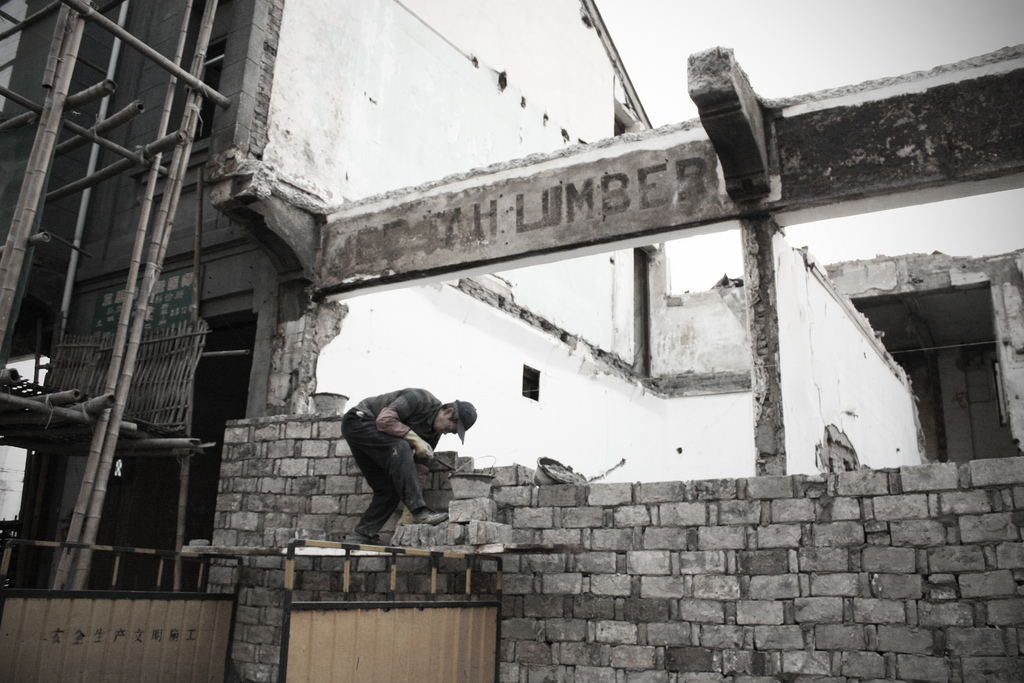 This may seem unremarkable at first glance, but the location was previously a circular turret building which once housed Horn’s Imbiss Stube (Horn’s Snack Bar) and Cafe Atlantic, common meeting places for many Europeans (many of whom were Jewish refugees) who lived in Hongkou district during the 1930s and 40s. Back then, it was known as the heart of Little Vienna. More background here and here.

Its doomed demolition began sometime around September of last year and I watched week by week as the roof and walls came down.

By January of this year, it had become a near empty plot of land, save for the side skeleton of what used to be shophouse fronts.

I found it odd that this worker was building a brick wall around a demolished site. Upon closer inspection, I realised that one of the shop fronts, all of which were made of old stone, was in English.

I came to the conclusion that the place was most likely once owned by a European family. It made the most sense given its location. After the mass exodus of foreigners from Shanghai post 1949, the shop head was covered rather than painted over, with new headers, which evolved from cloth banners to wooden sign boards to what are now mostly plastic sign boxes with fluorescent lights attached within.

A fortuitous deed for posterity, a little tell tale sign of history, but gone the last time I stopped by.

And then they were gone

I’ve lost them. I was away for 3 weeks and returned to a shell that left nary a sign of its past existence. Only 3 weeks ago, I…