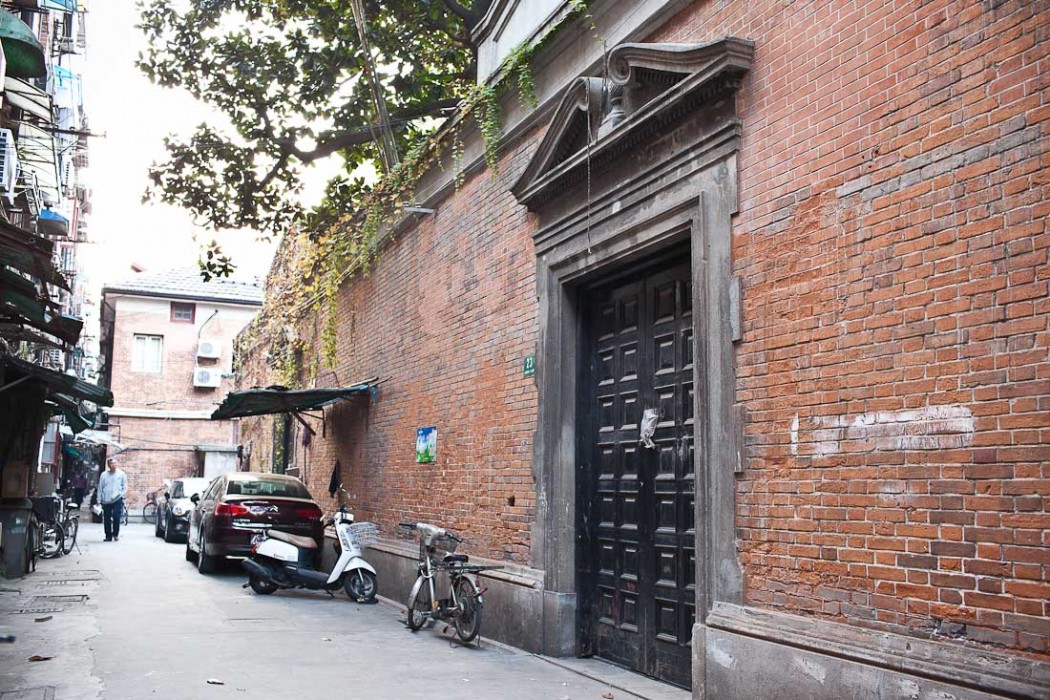 It can be claustrophobic in the alleys, especially when the backs of the shikumen apartments sit so closely to one another; it feels they are closing in. Hengfeng Lane (恒丰里) along the leafy Shanyin Lu (山阴路) behind Lu Xun Park is healthily spacious for a shikumen lilong neighborhood, except when you get lost in a cul de sac.

So imagine my surprise as I squeezed out of a narrow walkway to discover a giant walled compound standing prominently in the middle of the alleys. Two imposing black wooden doors rounded out by shikumen frames appeared to be tightly barricaded, concealing what I imagined to be an island of wealth.

“I wonder who lives behind here,” I said to my friend. High fences in the French Concession suggesting homes occupied by senior government officials or a CEO. But enclosed in the middle of a shikumen lilong in northern Hongkou? That seemed random.

We circled the walls to find a small door that had instructions scribbled in chalk, “Deliveries, please knock loudly.” No answer after hard rapping on the door.

Spotting an old lady washing vegetables in a nearby open sink, I sought more information.

“There are around 50 families behind that wall, the entrance is on the other side of the lane, on Xiangde Lu (祥德路),” she replied. 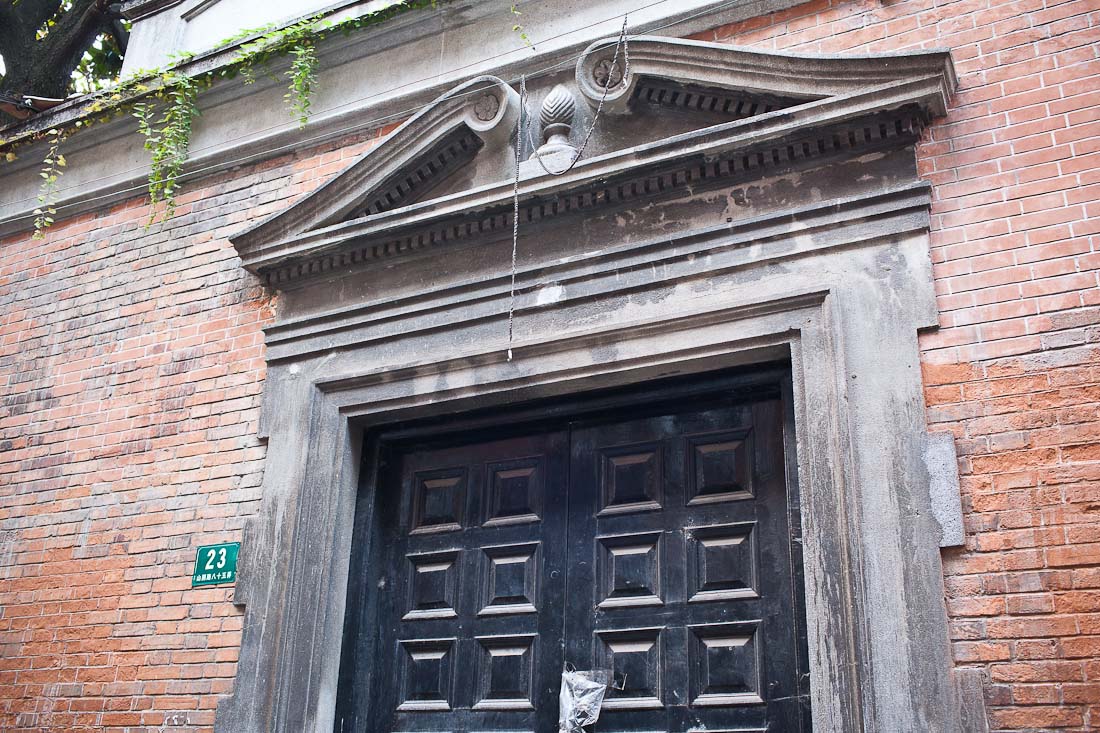 After two wrong turns to exit the labyrinth of the lilong, we emerged on Xiangde Lu (祥德路) which featured handsome windows and grills running along the length of what was likely the other side of the secret compound.

An old man smoked quietly at the entrance of one of the many small doors.

I approached him and outlined our curiosity. Is this the house with the large walls facing the Hengfeng Lane? He looked at us curiously, and nodded.

“Can we come in and look at what is the other side of the wall?” I ventured boldly. 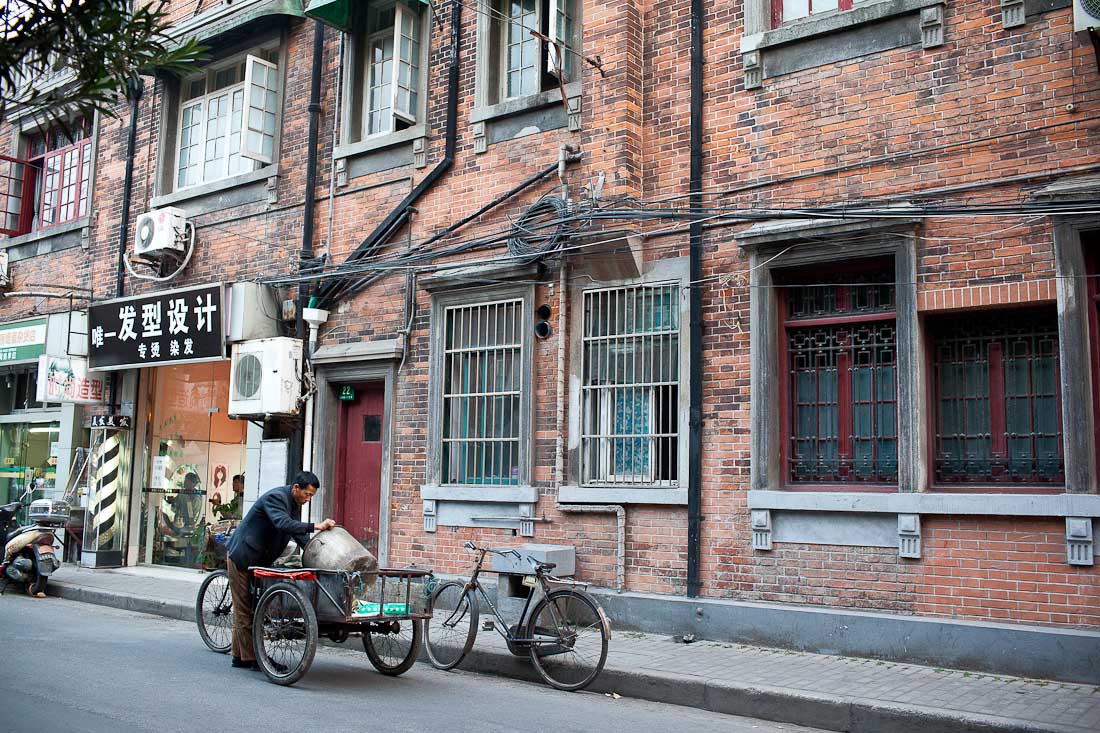 Amused more than intrigued, he took us through the kitchen and hallway, plunging us in darkness typical of such housing. We moved gingerly through, passing rooms and stairwells, cluttered with endless things: dusty bicycles, woks, old suitcases, papers and more …. stuff.

In the distance, I could hear a trumpet being played, the same tune over and over again, growing louder and louder. The light on the other side turned out to be from a small courtyard garden.

And there it was: the imposing wooden door. 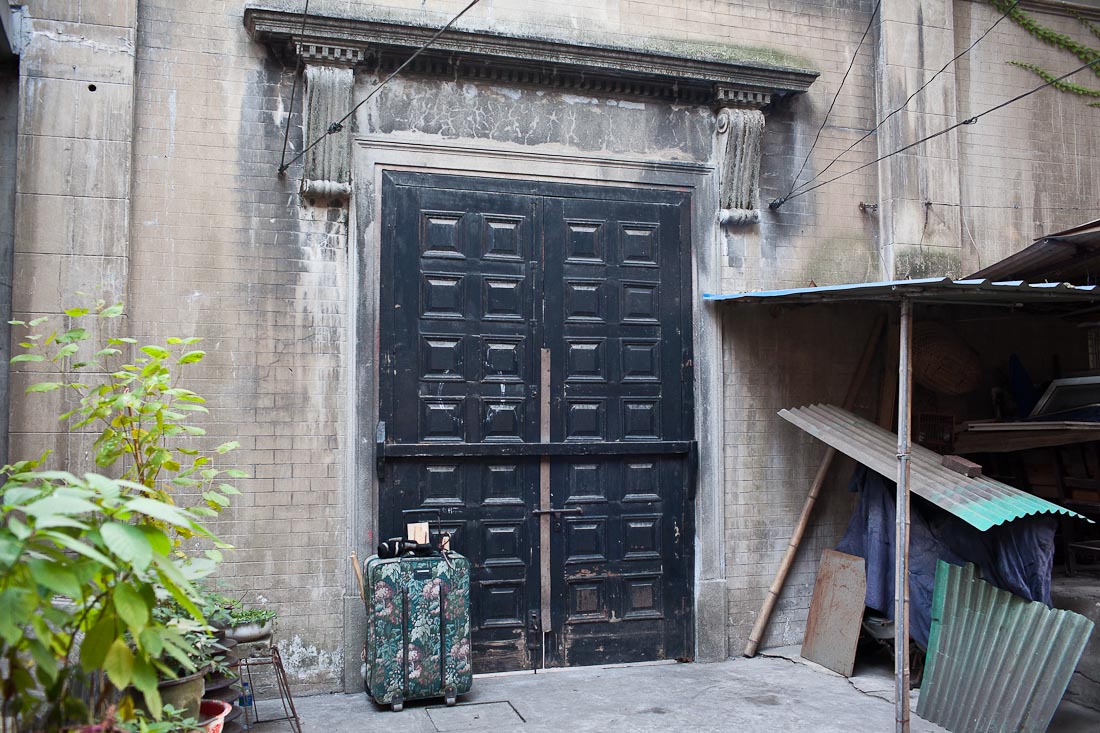 There were actually two large villas that sat in the compound but a poorly erected wall now separated them. The old man told me it was originally built by a wealthy Shanghainese businessman, or “capitalists” as he put it in good ol’ Communist fashion, who had allotted one villa for each son. Daughters are married out and lost forever, sons bore descendents and were granted property.

“They gave it back to the government after 1949, of course. Fled to Hong Kong or America, who knows.” He seemed keen to share more but was unclear about the details of the villa’s history.

The old man had moved into this house in 1980 from another lilong in southern Hongkou. He assured me that the Shanyin Lu area was under protection by the Hongkou district government, so he was quite happy living where he was. 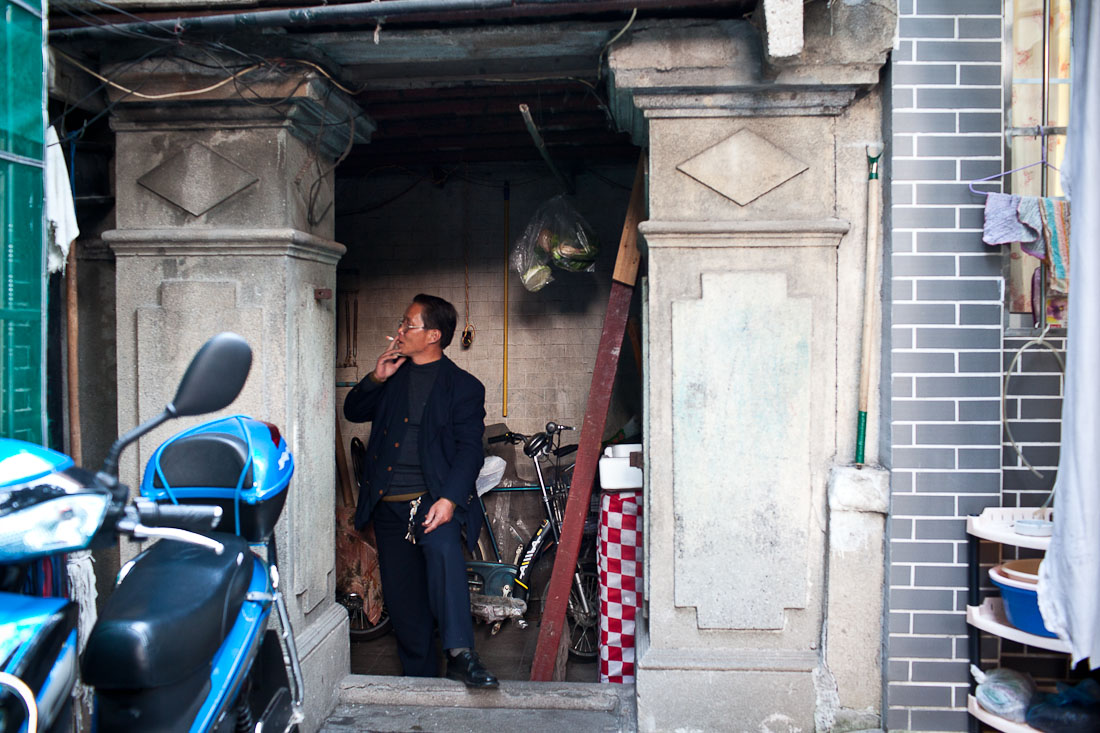 The trumpet playing stopped. I realized we had interrupted a young boy mid-practice. From behind a grilled window, his grandfather peered at me and went back to leafing through his newspaper.

“There are around 30 families here, 20 more families in the other villa,” the first man continued. Suddenly another gentleman emerged from the his make-shift home in the form of a garden shed, holding vegetables to be washed for dinner.

“How come you don’t use the main gate?” I pointed at the bolted wooden doors.

Both men scratched their heads. One replied, “It’s more convenient using the backdoor, leads right into the main road. We have another entrance that works from inside the neighborhood too.”

I pottered about the courtyard for a while, taking in the general clutter and careless greenery, admiring the hidden mix of European and Chinese decorative details like Roman columns and cornices, and Chinese flooring, buried by formica and aluminum. 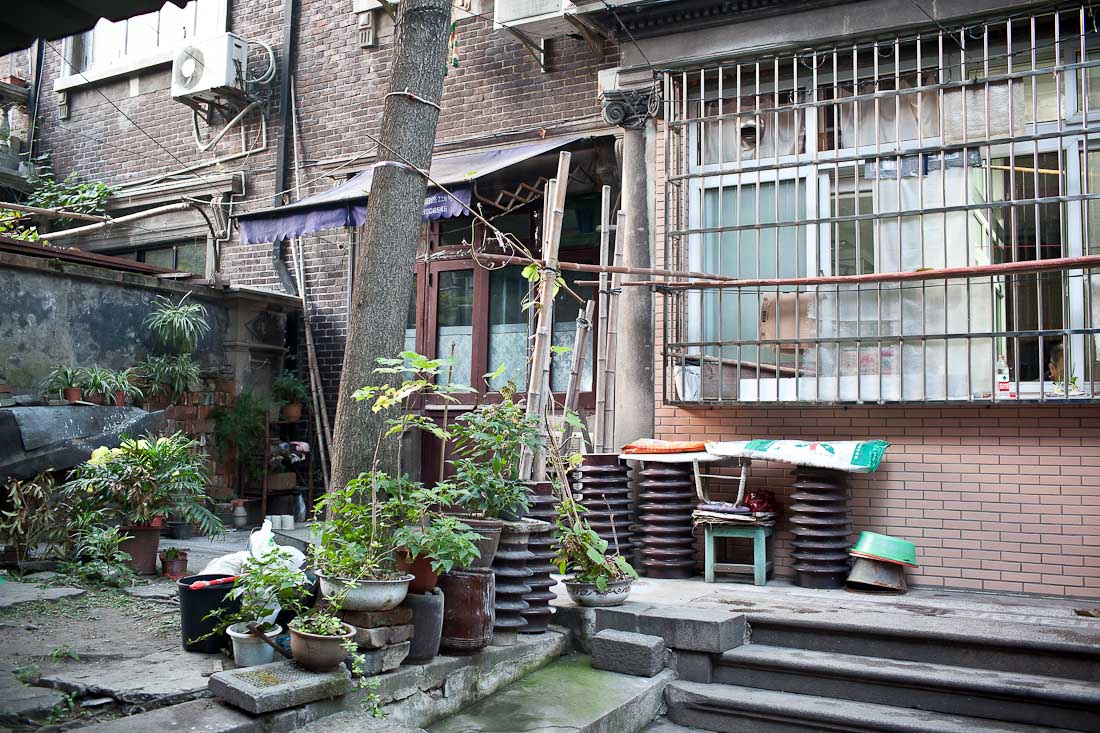 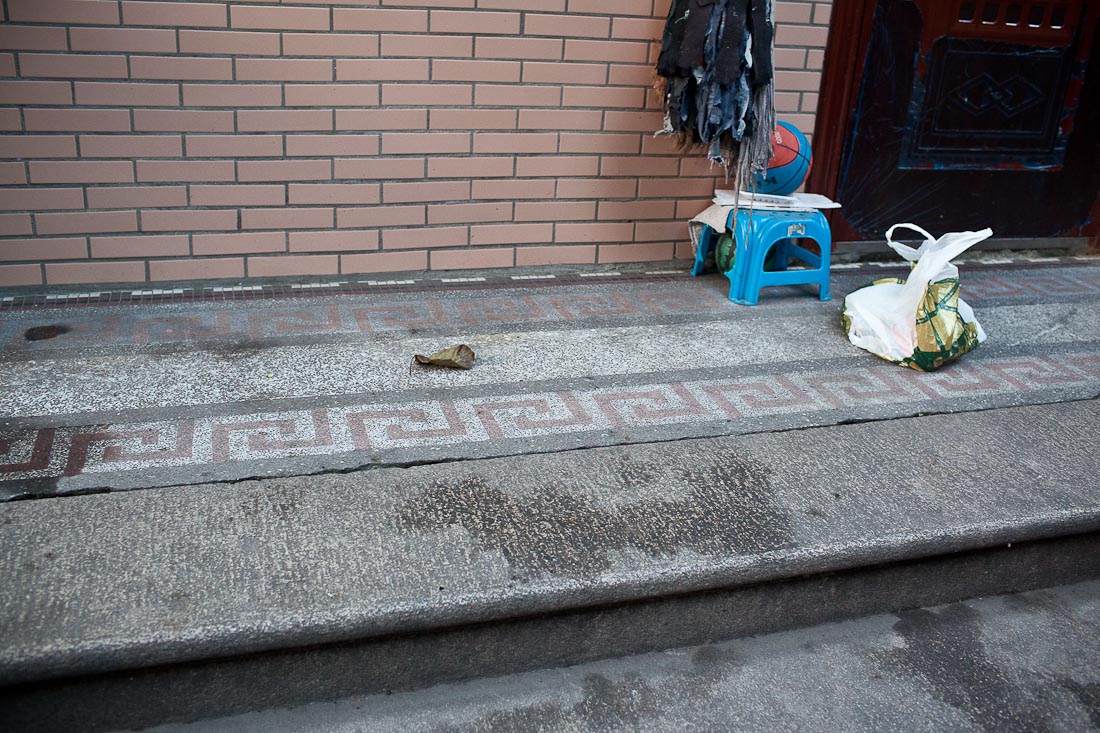 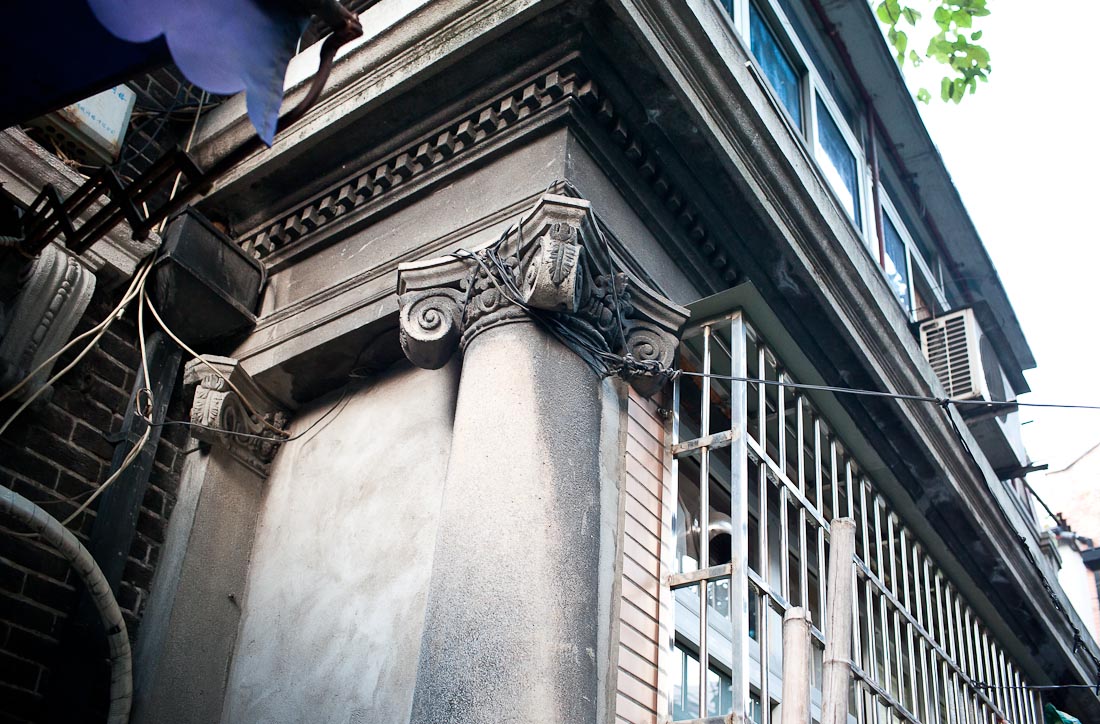 I didn’t ask if it was because the large doors were too “bourgeois” for the families who moved in after 1949, the residents chose to use the servant’s entrances instead. Logic told me the door was likely too unwieldy. But the high, imposing brick walls provided privacy for the current residents as it did the wealthy Shanghainese capitalists.

He finally led us to another small exit, the one we had found ourselves at an hour before. The sun was setting and the street lights gave the alley a soft orange glow.

“You know, film crews come here to shoot exterior footage all the time. Especially in the lane you’re standing.”

We looked around and noticed a bicycle placed idyllically against a wall, bathed in street light.

Bidding goodbye, we sought to exit the lilong neighborhood, albeit with only one wrong turn this time. 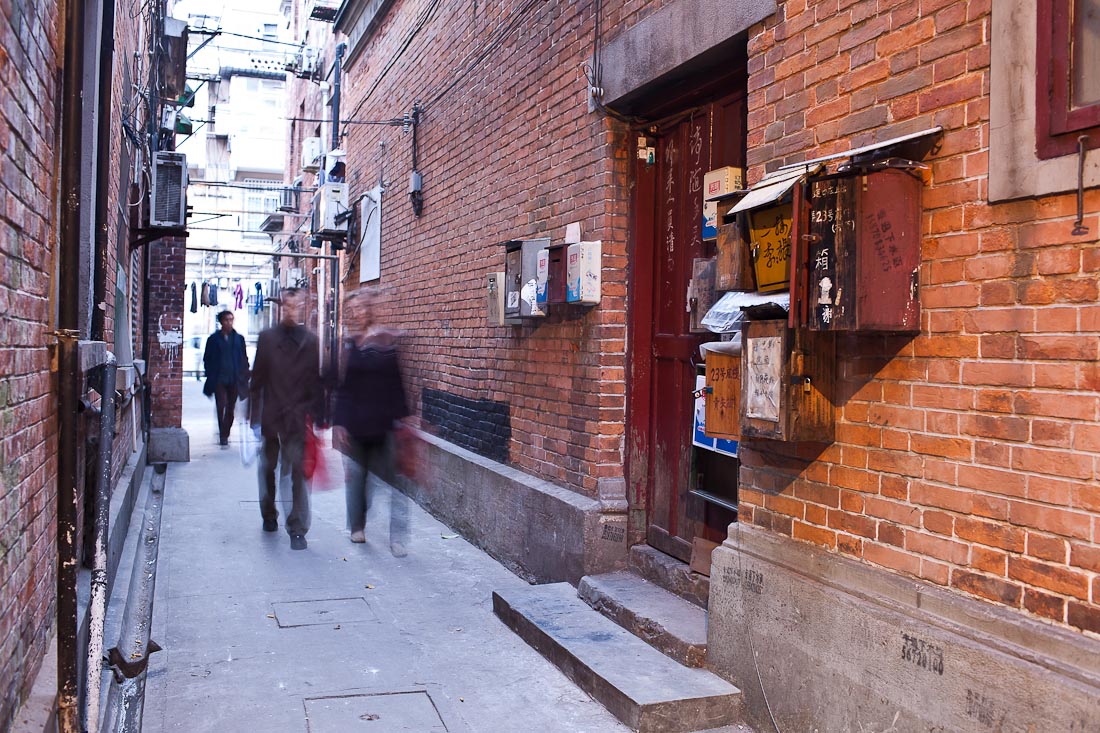 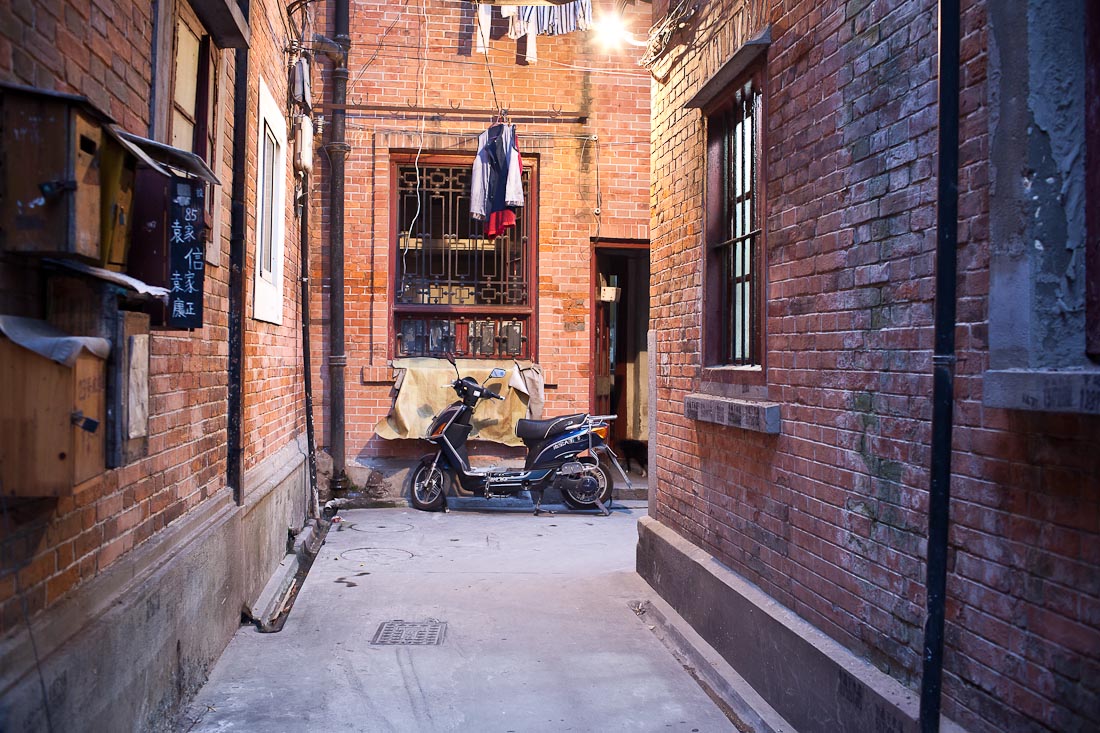 Behind the Camera: Alessandro Zanoni on Shanghai’s urban landscapes

In the years of photographing Shanghai, I’ve had a chance to meet a wide array of talented photographers and researchers as enthusiastic about documenting the city as I am. They…