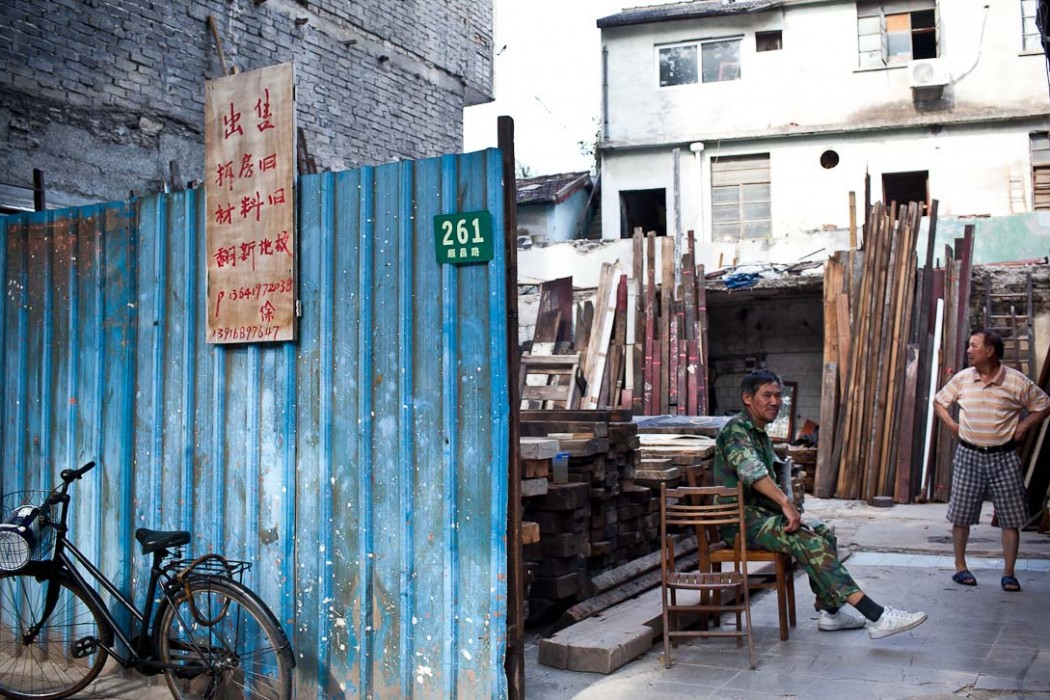 “I’ve been tearing down homes around this area a long time,” the shopkeeper picked at his shirt and flicked off lint with a long, yellowish pinkie fingernail.

“You know Xintiandi?” he asked lazily.

“Back in 1998, I helped take apart most of the shikumen homes in the Xintiandi area, there were many families which meant there were a lot of housing materials to sell. The wood has always been in excellent quality. If they are in a poorer state, I found companies in Fujian to re-process for resale.”

“Almost all the fancy old homes you see around the French Concession, they like to buy old wooden planks from me,” he boasted.

Disheveled, slightly grey-haired and in his early 50s, he was from Suzhou and had lived in Shanghai for decades. Home visits were rare but he merely shrugged when I asked if he thought himself a “new Shanghainese”. 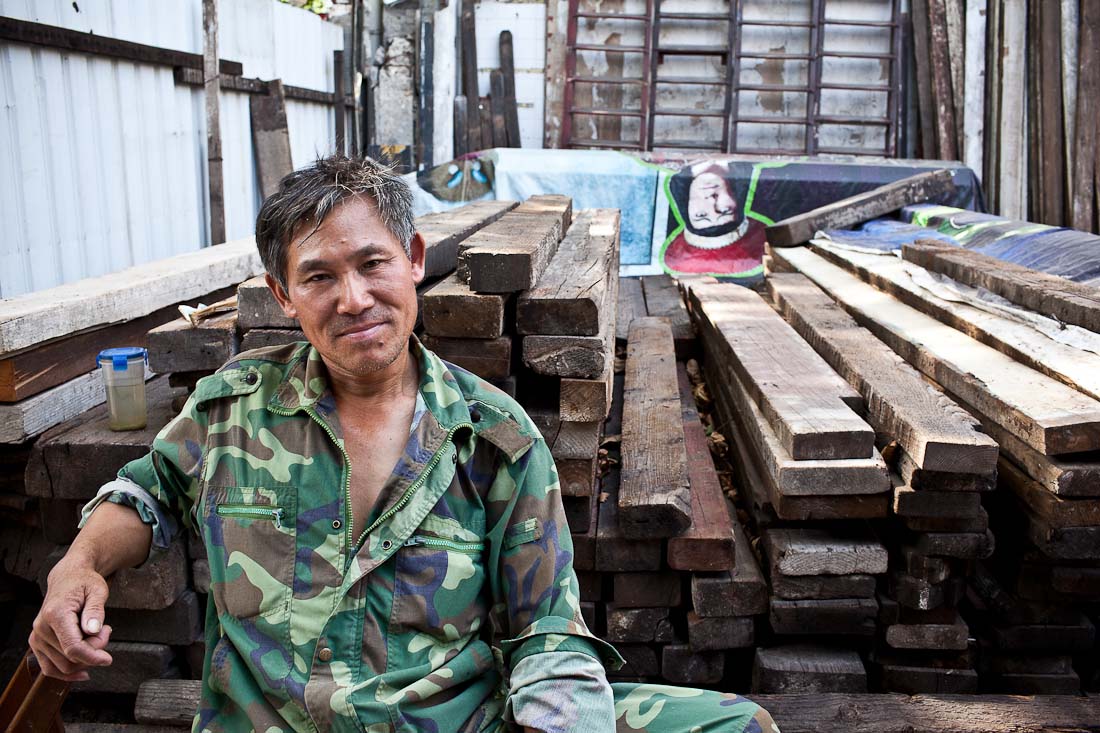 I’ve seen him several times whenever I pop in and out of the lilong neighborhoods around Fuxing Lu (复兴路), Jinan Lu (济南路), Hefei Lu (合肥路) and Shunchang Lu (顺昌路). He had no permanent shop front, simply any pop-up space in a demolished lot available for his business.

Negotiating with departing families and local demolition companies, he collected old wooden pieces from homes that were being taken apart – doors, floor planks, beams, pillars and ladders. It was a lucrative business in these old neighborhoods. Given the escalating property value of this corner of the Huangpu district, he has had steady business for years, which was unlikely to end anytime soon.

We were soon interrupted by a customer.  Dressed in mismatched clothing, the other gentleman explained he needed a ladder.

The shopkeeper directed him to the far corner of the space and the customer began examining each one closely, lifting and testing the steps. Curious, I joined him.

“What do you need a ladder for?” I asked.

He told me he was adding a third level to his home nearby and needed something to access his soon-to-be finished attic. Such old ladders, he noted, were cheap, light and of good quality.

The shopkeeper chimed in, “This kind of wood is close to 100 years old, all imported from India and the US when the foreigners built these neighborhoods. RMB 150 for the large ladder, RMB 70-80 for the middle-sized ones.” His customer balked at the quotes.

The negotiation began in earnest, with the shopkeepr launching in detail over the differences in the quality and color of the wood, which denoted its the sturdiness and density. 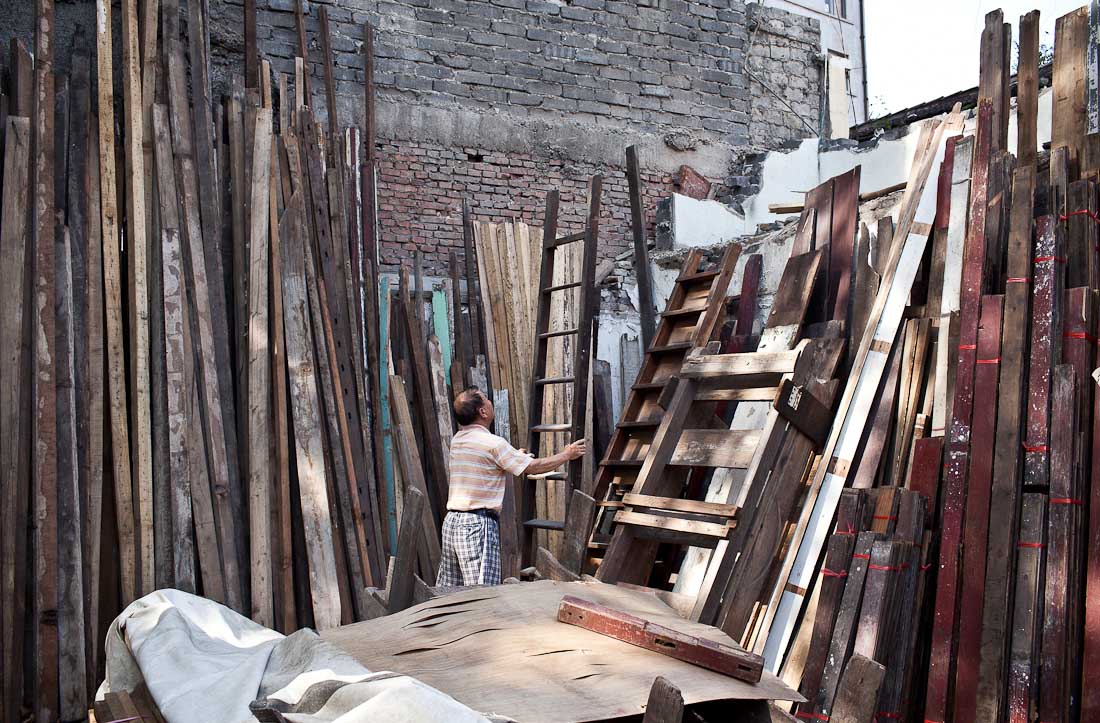 I asked the customer about his plans for home renovation. Do you need a permit to add new levels in your house?

Nah, he dismissed my question with a wave of his hand.

“All you have to do is check with your neighbors; maybe give them a small gift. My wife handles these kinds of niceties. As long as you don’t block their view, balcony or interrupt any sunlight or wind in their direction, it should be fine.”

Are there regulations that govern house renovations, like house inspections? Can you just build a new floor, just like that? I asked.

The customer looked at me oddly, tickled by my line of questioning.

“There aren’t regulations that explicitly say no for private houses, so why chase them down to create trouble for yourself?”

Somehow, it made perfect sense to me.

Suddenly piqued, he inquired, “Why, what is it like where you’re from?”

I explained in Singapore, you needed to submit a proposal to authorities who would conduct inspections to ensure the home was within a certain height, space and safety standard and subsequently the owner would be taxed for the extra living space.

The customer laughed heartily, possibly at the silliness of all the rules, regulation and taxes.

“That,” the man wagged his finger at me, “is the difference between a rule-based society like yours in Singapore and a careless and corrupt government like ours here in China.”

I coughed a bit nervously and laughed.

Like most retired people, he seemed happy to settle into deeper conversation. He told me he owned two properties in Shanghai by Zhaojiabang Lu (肇嘉浜路) about 20 minutes away by bicycle. He had acquired both homes from the fair, almost generous compensation from selling off his old shikumen home to the government to make way for the Shanghai Expo.

“On top of my savings, I bought a house for my wife and I, my daughter lives with us. The other house, I gave it to my son who unfortunately is not married. But let him be, he’s 40, earning RMB 20,000 a month and enjoying himself. Besides, I’m in no hurry for grandkids.”

Seemingly satisfied with one dark oak ladder in particular, customer and shopkeeper spent the next few minutes settling on a price. I joked about the premium of buying wood that would have been shipped abroad; the customer rolled his eyes, unconvinced.

His ladder safely tucked away by the shopkeeper for pick-up the next day, the customer hopped on his rusty bike and left.

“A good buy.” The shopkeeper said to himself. “Good wood is always a good buy.” 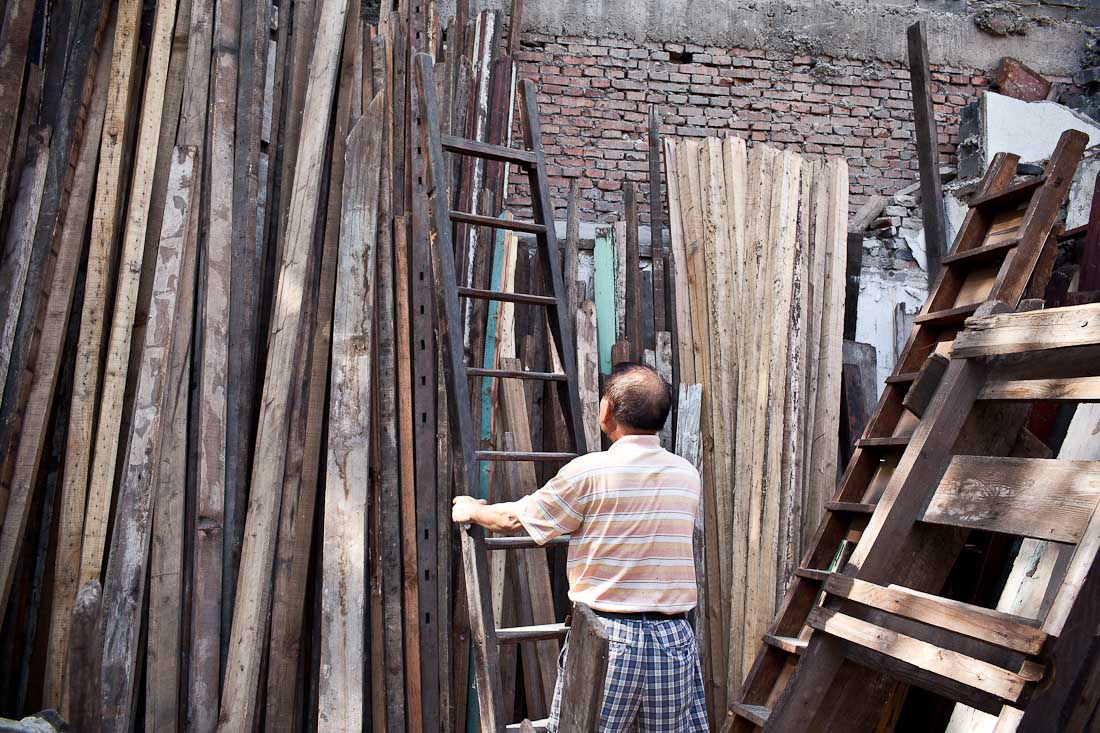