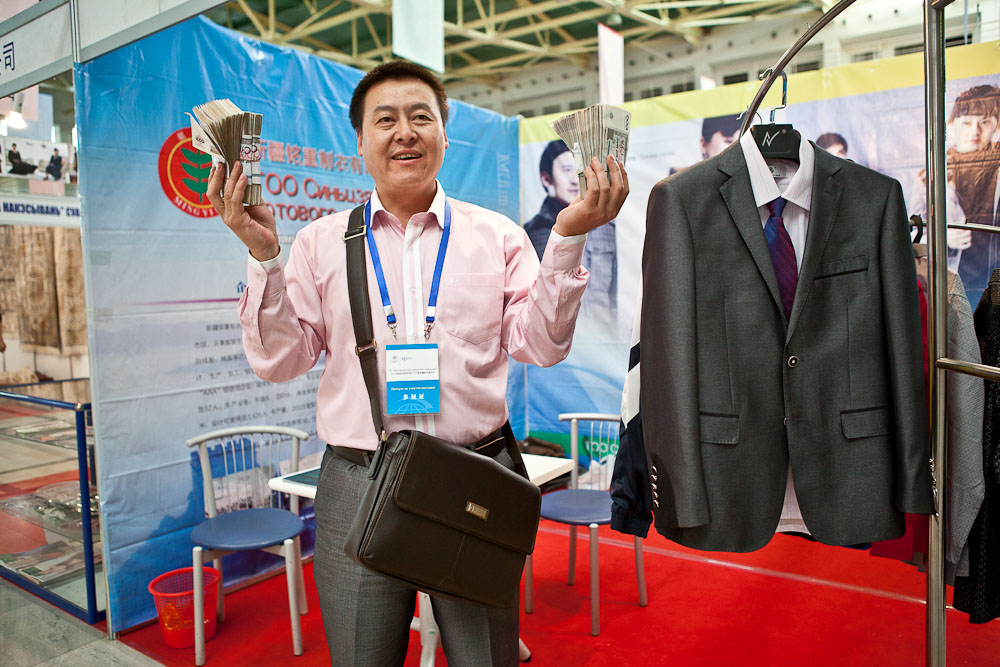 Greetings from Tashkent, capital of Uzbekistan! I’m here helping to document a few things as part of the China in Central Asia project headed up by my colleagues Raffaello Pantucci and Alexandros Petersen. You might recall I was in the region last October specifically in Kyrgyzstan and Kazakhstan.

On my flight from Beijing to Tashkent, I was off to a winning start when I encountered a large group of businessmen from Xinjiang. They certainly made my 6 hour flight quick and entertaining.

I spent much of yesterday photographing them at the Xinjiang Commodities Trade Fair in the outskirts of Tashkent, represented by a wide array of businesses from uniform garments production, cotton picking machines, electricity infrastructure development and Xinjiang’s best delicacies. Above is one Chinese businessmen who after selling a few Western suits showed off his bundles of Uzbek som, which unfortunately cannot be brought outside of the country. With 1800 Uzbek som to 1 USD, an individual bill is almost worthless.

What to do with all of them? I asked him, “Why, spend it all in Tashkent! Dinner, drinks and karaoke!” he boomed in response.

– One of Magnum’s leading photographers Chien-Chi Chang has put together a collection of photographs taken in New York’s Chinatown between 1992-2011 with audio. An estimated 100,000 Chinese people live in the Canal Street area of Manhattan, the largest Chinese community outside of Asia. Chang has spent the past 19 years capturing what goes on behind Chinatown’s façade. You’d be remised if you didn’t check out Chang’s incredible portfolio.

– I’ve been wanted to share this for a while. The debate of camera phone photography continues, this time, aided and abetted by apps like Instagram and Hipstagram. Can it be accepted as photojournalism if the apps dramatically alter the photo? Ben Lowy seems a viable spokeperson considering his stunning collection of Hipstagram photos shot on Iphone.

– Singaporean photographer Sim Chiyin (who is also represented by Vii Photo Agency) captures Burma in the wake of political opening.

– We’ve been seeing a great deal of photo essays on North Korean by foreign journalists following a state sanctioned (and heavily guided) tour. I particularly enjoyed Reuters’ Bobby Yip’s “Window into North Korea” which reflected a rather even view of what the government wanted foreigners to see to the mundane.

Interestingly, an insightful contrast is this edited collection of photos put out by the Korean Central News Agency (KCNA), the state news agency of North Korea, which is very utopian in nature.

– Maura Elizabeth Cunningham discusses the complexities of China’s rural-to-urban migration and reviews a handful of new books, both academic and popular which explore the issue.