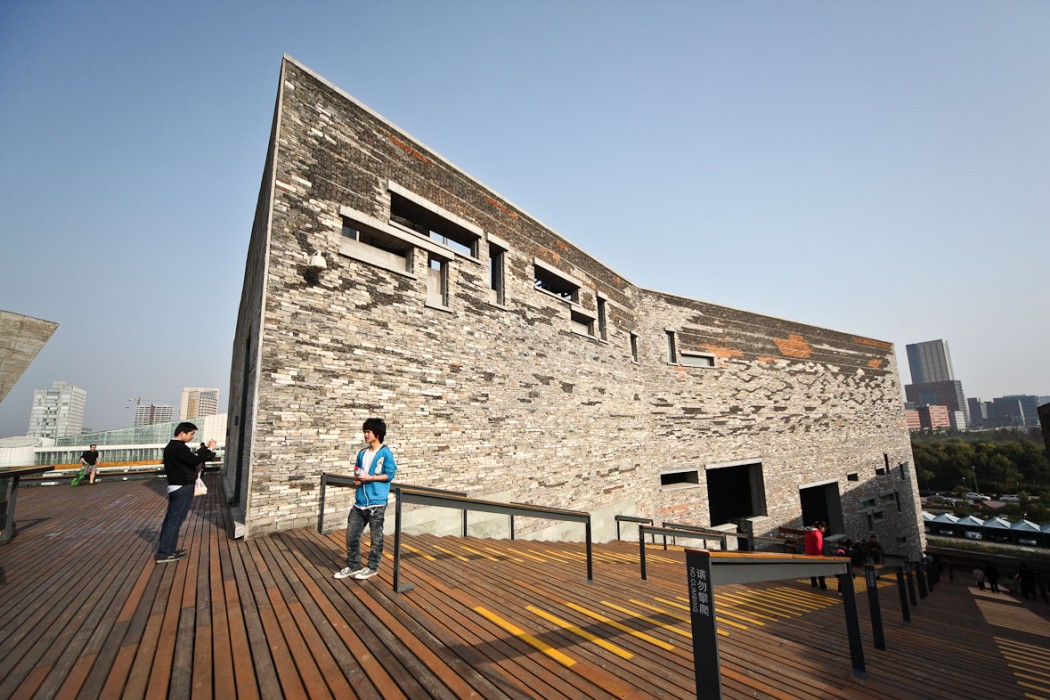 The Qingming holidays was spent with a pleasant 2.5 hour drive to Ningbo, a trip that would otherwise have taken 4 hours if not for the never-ending Hangzhou Bay Bridge, an impressive feat of Chinese infrastructure.

I was particular excited about visiting the Ningbo History Museum after learning that its architect Wang Shu became the first Chinese to win the prominent Pritzker Architecture Prize awarded by the Hyatt Foundation of Chicago. His style leans towards simple and angular lines with an emphasis on Chinese refurbished materials but rarely with traditional results. (Here’s Wang’s interview with Architects Newspaper)

From afar the museum looked like a stone ship that ran ashore, looking particularly stunning against the bright blue sky. The exterior is made up of asymmetric lines punctuated abstractly with small rectangular windows. The walls are colored by a blend of salvaged stone and brick from old houses with the occasional spot of red, lending an overall aged look. Inside, the huge atrium is mapped by giant angled slabs running along all sides of each floor. 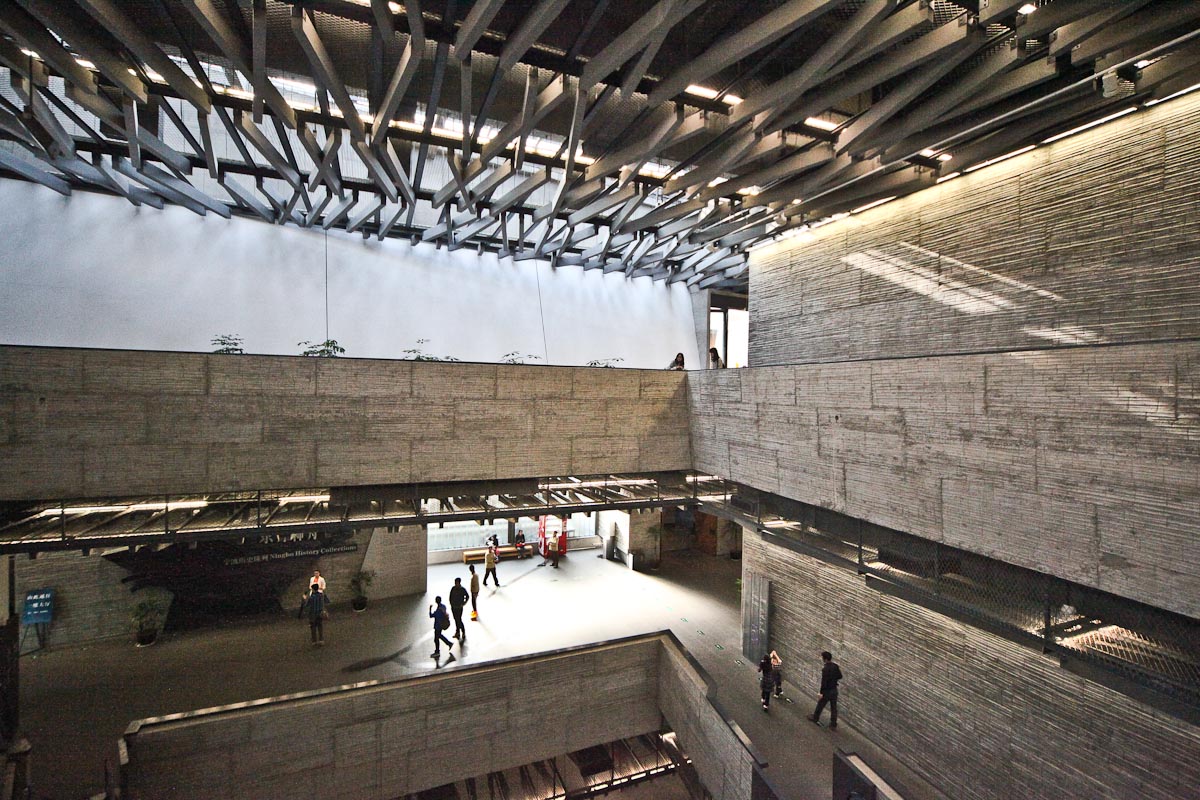 The museum is huge, almost too huge in contrast to its exhibits – 3 floors detailing the history of Ningbo (or Mingzhou (明州) as it was earlier called) from Hemudu culture in 4800 BC (cave men-like with stone tools) through the dynasties as a seaport and part of the southern silk road. I watched a father clutching his son’s hand, patiently explaining the opening up of Ningbo’s trade after being closed off during the Ming dynasty. The mother stood behind the duo, a wry smile playing on her lips.

The vast interior meant that visitors had plenty of roaming space which is always a rare treat in China. Equally pleasant was strolling around the expansive wooden-deck roof under the warm sun. 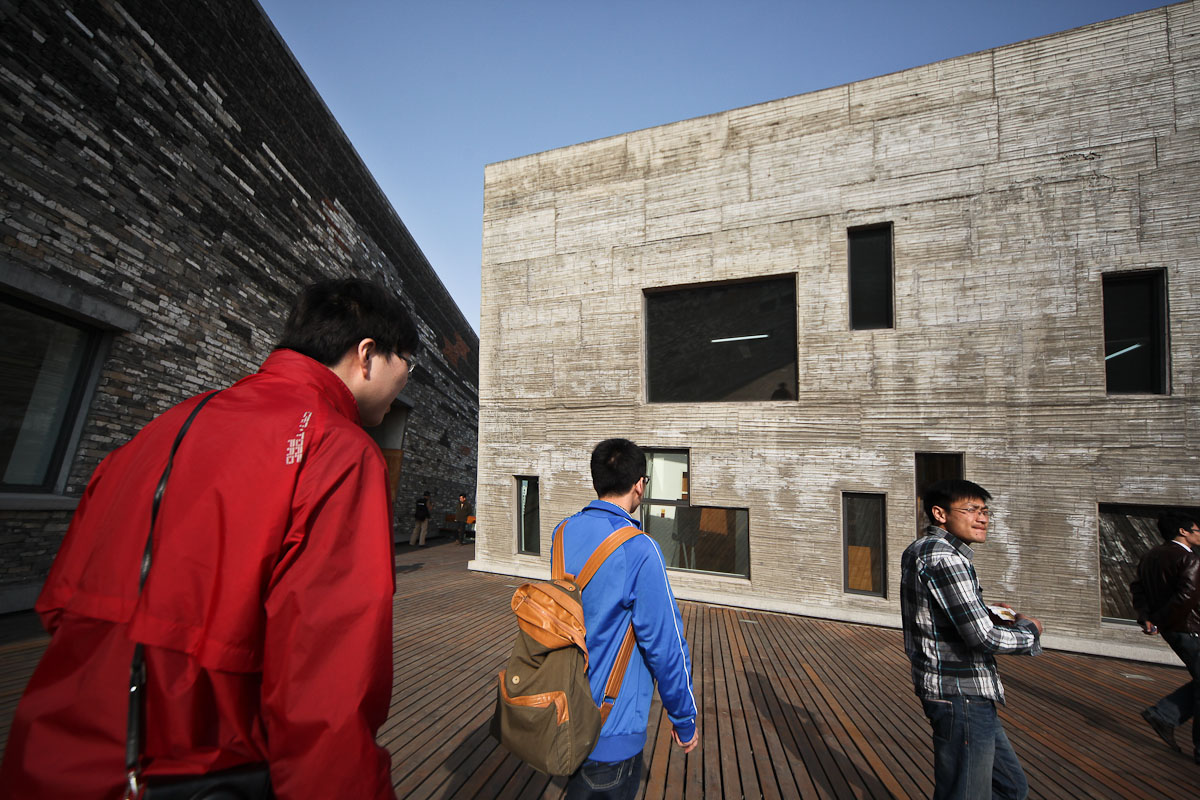 The touch of modernity was appropriately complemented by several other historical sites for the trip which I highly recommend, including the beautiful Tianyi Pavilion (天一阁), one of the oldest library estates in the country and Chiang Kaishek’s ancestral home (将氏故居) in Xikou (溪口) which is a 40 minute drive from the city. For lunch, I urge you to visit one of the several branches of the hugely popular GangYaGou (缸鸭狗) (the logo is a duck and dog around a tank) for Ningbo’s best snacks. Clean, (relatively) cheap and very cheerful.

Today is a smoggy, filthy day in Shanghai. My eyes burn just a little, my throat ticklish from deceptive and stubborn dust particles. Friday conversations have turned to plans for December….