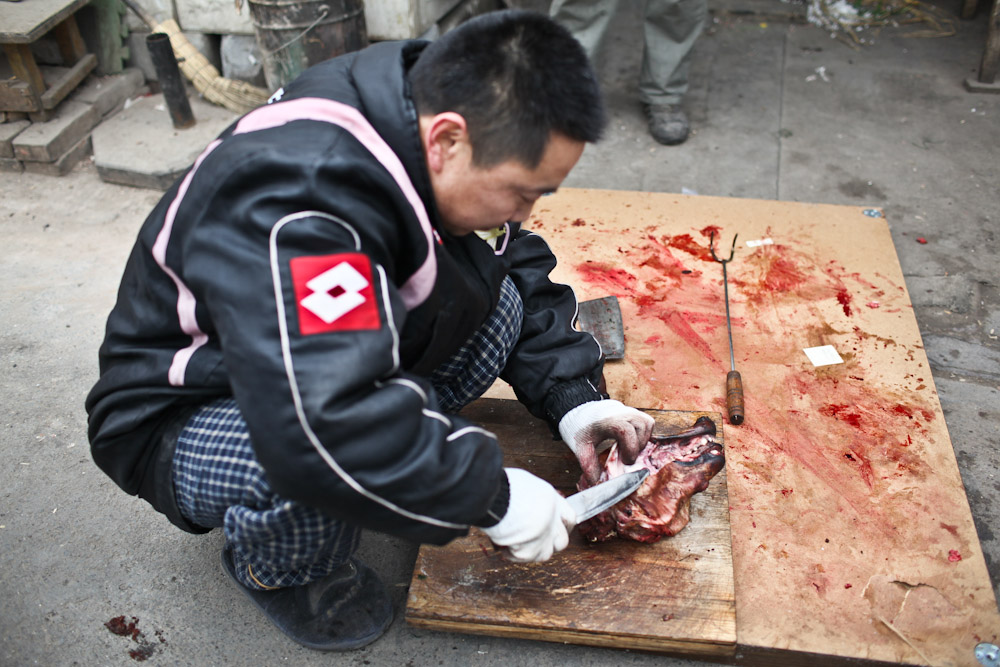 Warning! Some images may be disturbing for readers.

The village of Jiangtaiwa (将台洼村) and  Dongcuijia (东崔家村 ) are two of several clustered villages between the fourth and fifth ring of Beijing. The villages dated its roots to the Ming dynasty when Jiangsu traders first settled in the area. Now, it is largely  populated by migrants who had made Beijing their home within the last decade.

I was with Anton Hazewinkel, the photographer of the excellent Beijing stories blog Chinesense.com and his assistant Li Yu. He had kindly taken me around to meet local residents he had previously interviewed and photographed.

On our way out, we passed by a group of men chain-smoking outside a budget cafe and had gathered around a basin of fresh meat, watching a comrade hard at work with a carcass. 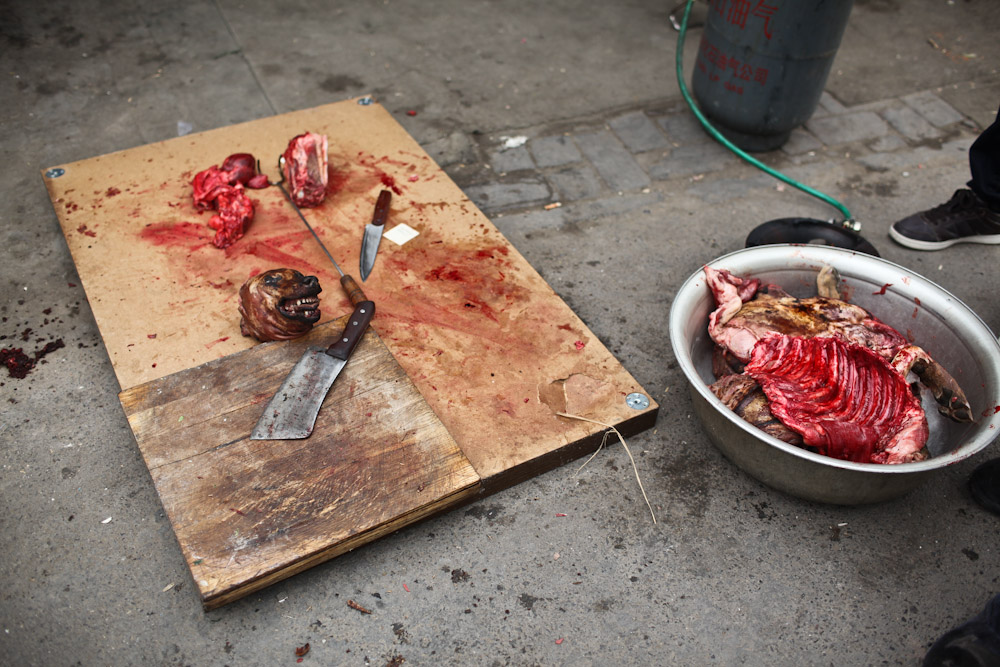 A large thigh rested on the rim of the basin. It looked too large to be a chicken and too small to be a goat. A rib cage laid on top of severed parts, prominently stripped and laced with blood so fresh and crimson, a shiver ran up my spine.

It was then my eyes drifted to the head of a dog on a chopping board, staring at me with glassy eyes and a mouth half-opened as if in shock. The creature was sold by a farmer in Hebei province and was likely slaughtered minutes before we chanced by.

“RMB20 for a jin (half a kilogram) if you want to buy. If not, don’t bother me with questions.” The chef dismissed us. I had guessed him to be from the south since the region was famed for eating anything on four legs. I was right when I heard him mutter “in my hometown of Guangxi” as he picked up a hunk and tossed it in a boiling vat.

He then positioned the dog’s head heavenward and with one heaving stroke, sliced down the side of the dog’s mouth and split the cheek. My stomach churned and I turned away, clutching Li Yu by the arm. The girl looked equally ashened.

Less than an hour later, we were in a more residential neighborhood visiting a man who specialized in wedding preparations. His shop was called “Easy Love” and he was as easily affable in discussing his business. The shop was a warm respite from the Beijing cold. We were surrounded by voluminous wedding dresses and bright red wedding paraphernalia, the grey and dust of the village far from our minds. 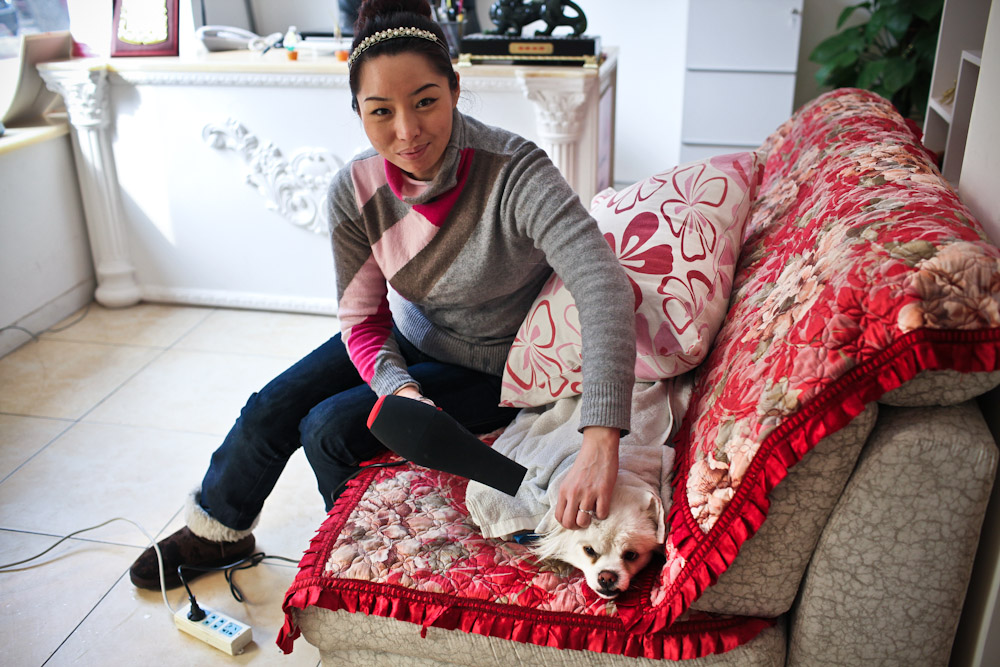 Halfway through, his wife brought out a white cocker spaniel squirming wet and uncomfortable in a towel after a bath. The dog grimaced as the woman began to blow dry its white coat back to a warm fluffiness. She laughed and stroked her pet, cooing sweet words of endearment. Her husband smiled and dryly remarked that the dog has been spoiled.

“Sometimes, we lavish more attention on them than our children!” he joked. 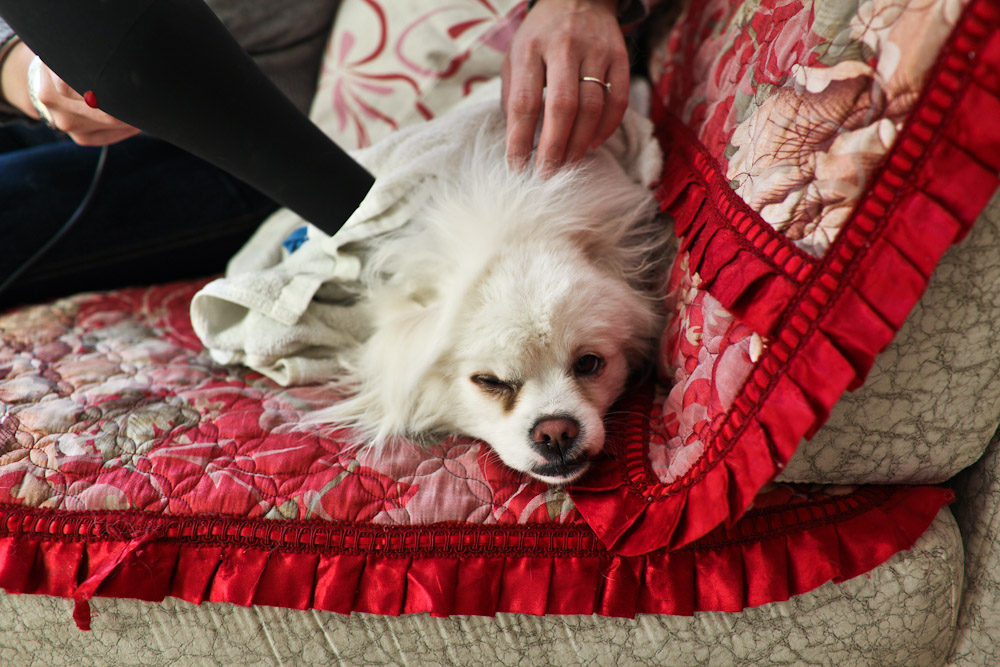 I could only muster a vegetarian option at lunch that afternoon, the contrasting images of the two dogs – one utilitarian and the other pampered – still burning in my brain, even now as I write this post.