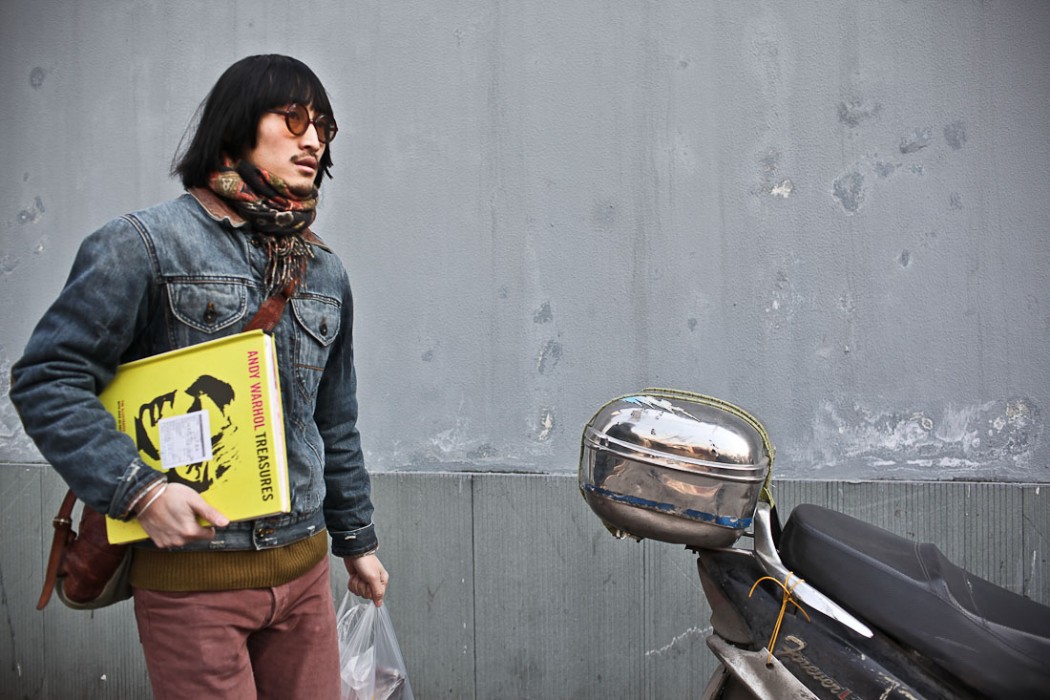 I’ve decided to add a spot of photos to this segment, just to spice things up a little. I found this young man wandering in the vintage books market by the Confucious Temple (孔子庙) this weekend. He looked like he belonged in an artist colony in Beijing. Speaking of which, I’m off to the Capital for the weekend. Enjoy!

–  I love Elliot Erwitt’s work, how can anyone not be charmed by his wit and humor? Enjoy Erwitt’s “Sequentially Yours”, juxtapositions of vignettes and moments taken at short intervals that tell a fleeting tale. Guarantee to inspire chuckles.

British photographer Paul Graham tries to do the same with his new book, Present. “.. two good pictures, or sometimes three, taken seconds apart, with only a slight shift of vantage point and a minor adjustment of focus in between them, but which, when placed together, mimic our own visual experience of moving through the world.”

– I’ve been following Kristy Mitchell’s work for years. To call her breathtaking work photography does little justice to her boundless creativity and genius when it comes to conveying stories with beautiful models and self-constructed, intricate props. I urge you to have a look at her latest work “The White Queen” as part of her “Wonderland” portfolio. In the interview, she shares her inspiration for the project and how she spent almost 6 months developing it.

– A storm of debate continues to swirl around Samuel Aranda’s 2011 World Press Photo of the Year win depicting a fully-covered Yemini woman clutching her wounded son. David Campbell says to look past the endless opinions and excessive critiques, and see the work as it is. He quoted Aranda who explained observations of his Pieta-like composition:

“It was not intentional…You know how it is in these situations – it was really tense and chaotic. In these situations, you just shoot photos. It is what it is. We’re just photographers. I consider myself just a worker. I just witness what is going on in front of me, and shoots photos. That’s it.”

But the best has to be Blake Andrews’ belly-clutchingly hilarious critique on the overly fussy interpretations of Aranda’s work. He also teaches us, tongue-in-cheek, how you too can secure a World Press Photo nomination next year.

– “Out in the cold: China’s petitioners” by Singapore photojournalist, Sim Chi Yin who is based in Beijing. After losing their property to illegal land seizures, pensioners travel to Beijing to seek recourse from the central government, often to no avail. All they have are a few worldly possessions barely enough to clothe and feed them, no money and thinning patience.

The current ugly smog Shanghai is experiencing right now might have fooled us into thinking the past two days of brilliant weather was a dream. It wasn’t. I hope you…