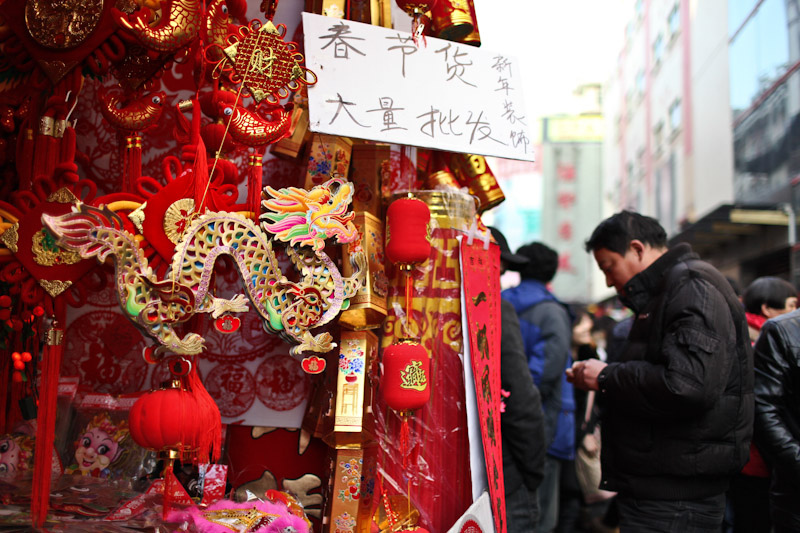 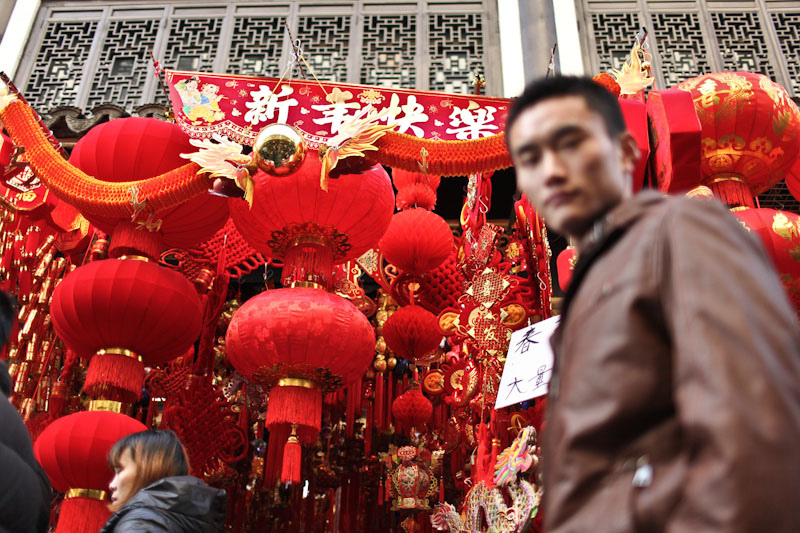 The din of nearby crowds rivaled the incessant car honking as I alighted by the main road. Mustering great vigor, I dove into the busy pedestrian area around the Fuyou Lu Wholesale Market (福佑批发市场) near Yuyuan (豫园). My mission was to acquire some decorations to bring home to Singapore to alert our neighbors that yes, Chinese New Year is coming and this time, the Dragon will breathe fire into the new year while the Rabbit scampers away, never to return until 11 years later.

The smell of street snacks mingled with loud bargaining by hawkers and customers alike. Festivities don’t officially get underway until next Sunday but the buzz and cheer of the most important holiday for many Chinese all over the world are already in full swing.

The street was awashed in swaths of red cloth and paper laced in glittering bits of gold. The endless paraphernalia associated with celebrating Chinese New Year never fails to amaze me. Last year’s shiny posters of gold-detailed rabbits have been replaced by dragons that reflect every mood: cute, regal, tacky, fierce and prosperous. The Year of the Dragon is deemed a good one – for babies, for businesses, for weddings and anyone who believes in the auspicious symbolism it embodies.

In the background, Chinese New Year songs blared at every corner, ranging from the traditional gongs and songs to sped-up techno, none of which did anything to sooth the tic developing in the corner of my eye.

Besides the dragon, the other traditional symbols of prosperity and wealth sold well among shoppers: hanging mobiles of fish, ancient Chinese ingots, firecrackers, all 12 zodiac animals bundled together and lanterns. I found myself tangled with two other matrons trying to pay for my Dragon posters, so overwhelmingly massive, the God of Wealth would be blind to miss my home. Next to me, an older gentleman amused himself with a stuffed toy hammer shaped like a dragon that irritatingly parroted “Gongxi Facai! 恭喜发财!Gongxi Facai! 恭喜发财!” over and over again as you bashed it on its head.

I imagined nimble hands all over the province of Guangdong working at blinding speeds through December and early January, churning out all these .. things … to satiate the depthless appetites of heady consumers.

Chinese New Year is not complete just with decorations. Grandmothers swarmed candy stores to stock up on sweet bites for expected visitors during the new year, migrant parents perused toys to bring home, and children took advantage of the festive atmosphere to wrangle presents. Almost everyone was seeking something new to wear or adorn themselves with. I watched a woman, hands red and puffy from excessive dish washing, stroking a gold bracelet lustfully as her daughter tugged her arm for a snack.

Not to be outdone by the shops, entrepreneurial mobile hawkers lined up in the middle of the pedestrian street to peddle even more (if at all possible!) knick knacks. A tall striking man displayed his wares by layering himself with multiple  flutes on strings, enticing passers-by with a lyrical tune. Another cheery man wore a winter hat shaped like a panda and helped children try on similarly shaped hats. Adorable, wind-pinched cheeks peered out under their furry hats at parents unable to resist their innocent glee.

And just like last year, I emerged slightly rumpled but triumphant with my procured decorations. Each January, I vowed never to throw myself at the mercy of Fuyou Lu at this time of the year. But I cave each time for it has become a festive ritual, and if you’re in town, I encourage you to do the same.

Just remember, hands tucked in on the sides, stiffen the spine and dive headfirst into the crowd.

Over a month ago, on a cloudy spring afternoon, I found myself standing in front of a spectacular Art Deco building, all eight floors of mustard yellow and…