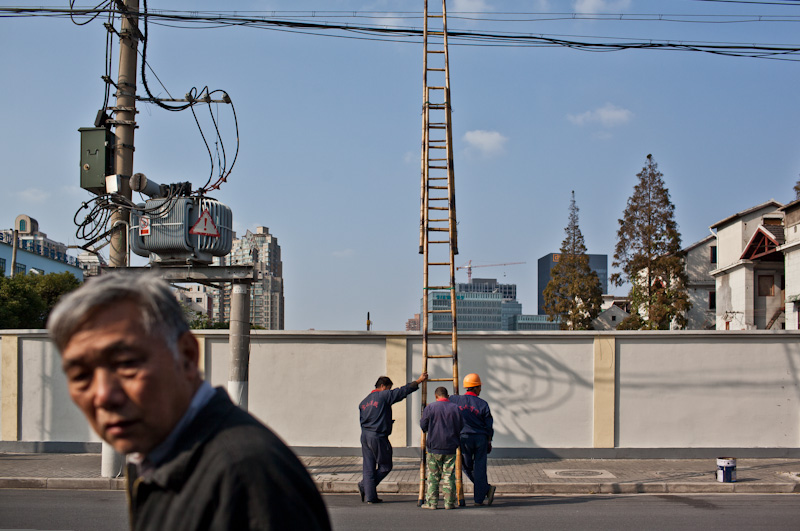 I’ve been sitting on this series for a while. Well, not just this, there are a dozen others, but let’s talk a little about this one in particular.

There isn’t a specific or exciting story to tell. It was a thoroughly enjoyable day-long amble on a Saturday in Hongkou district (虹口区) which I ended with cramped feet but a happy heart. Everything came together: cool weather, sufficient light, optimal crowd density and diversity of characters. It was days like this that reinforced my affection for Shanghai.

Yet when I reviewed my work the next day, I felt uninspired, almost disappointed. I found some perspectives unoriginal and compositions lackluster, a bit of a waste given the pleasant circumstances. Where was the motion, flow and wit? One photo seemed like a variation of another barely a month ago. 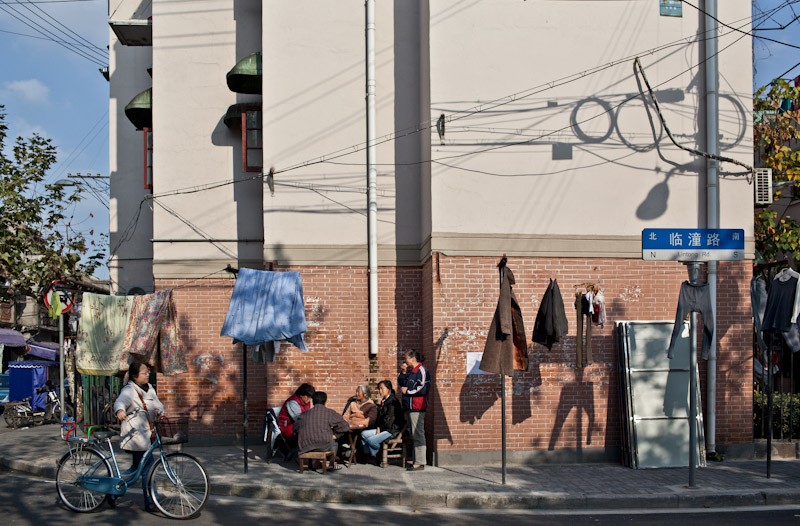 It took weeks to filter a dozen shots I could live with, another several days to do another cull. I remain undecided, deleting another as I write this post.

So what of it then, you ask? It was an exercise for my own gratification, a weighing of one’s minor accomplishments. But really, it is a reminder of how difficult the process of street photography can be for some.

Many photographers consider street photography to be challenging, perhaps the most difficult of genres within photography. The random and often uncontrollable elements in composition and people’s growing sensitivities about privacy are just some examples. Ironically, these are also the reasons that drive some to embrace street photography.

Personally, I’ve had little trouble with photographing people in Shanghai’s streets, something I’ve discussed at length before. Where I find constantly challenged is in creativity, sustainability and speed, especially when detecting and assembling an interesting composition quickly.  The process is easily suceptible to weather conditions as it can by your emotional state. Often times, it can be both relaxing and frustrating.

My partner often teases me about being too hard on myself, and how little of my work I share (ironic given that I have a blog) but I discover this to be surprisingly common among some photographers. It’s not a vanity thing but rather about skill and expectations. 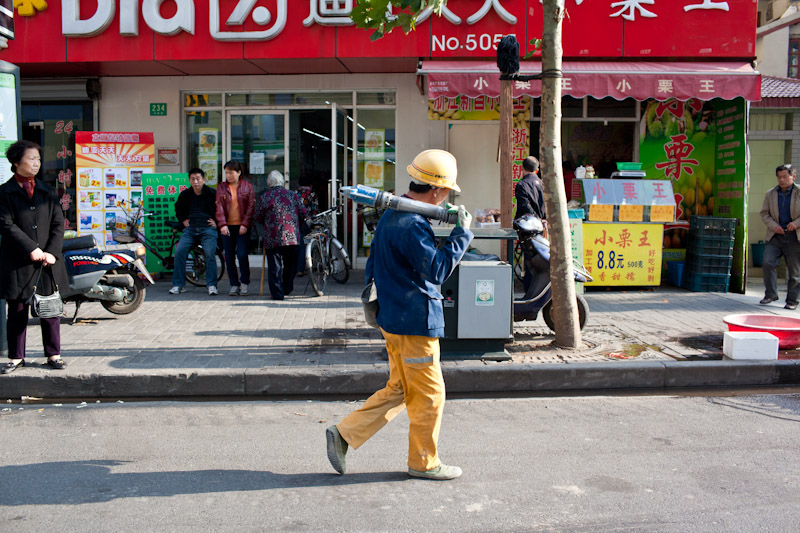 Last September, as part of organizing the exhibit “The Living Streets of Shanghai and The Hague”, I spoke at length with photographer Lu Yuanmin (陆元敏) who was the event’s guest speaker.

Lu 老师’s (or Teacher ‘Laoshi’ Lu as most call him out of respect) street photography, largely shot in black and white film, is concentrated in his hometown of Shanghai. Pushed by high contrast and heavy grain of the film, his photos exude a dreamlike feel (also a recurring theme in interviews). His inspiration “comes from visual memory; the moment of collision of memory and reality.” It is as if one is drifting through Shanghai with an invisible cloak, peering intimately (and fleetingly) into people’s souls.

When I asked him if he encountered much difficulty shooting in the streets, he acknowledged how angry some people can be and it has grown more difficult of late. Being exceedingly shy in public, Lu is adverse to conflict.

“When I notice an argument in the street, I tend to walk away rather than towards it.” he said once in an interview. All of this has shaped his stealthy approach in street photography.  Before, the Lomo camera used to be one of his many weapons of choice. Of late, he has switched to a toy camera which hung like a small key chain no bigger than his thumb.

Once, I blurted out that despite practice, I find myself with no more than 8 good shots after a long day of shooting.

“So many?” Teacher Lu remarked in surprise. “That’s quite good already. I usually have just one or two,” he laughed. My face reddened and I slunk deep into my chair. That only made me feel worse. Clearly, my bar of excellence wasn’t very high.

When shooting film, Lu insists on developing all of it himself, fearing others might see his “mediocre” work if he sent it off to professionals. There was nothing militant about his approach to photography, he really was that humble. Perhaps with fame comes growing expectations, and you can be your own worst critic. Despite decades of experience, even veterans still grapple with the process. But it is Lu’s passion for street photography that presses him on. Nothing was too trivial. Nothing was to be passed up.

And so, the weekend is coming. Another day-long amble is expected and the frustrating process of shoot and review will reoccur.