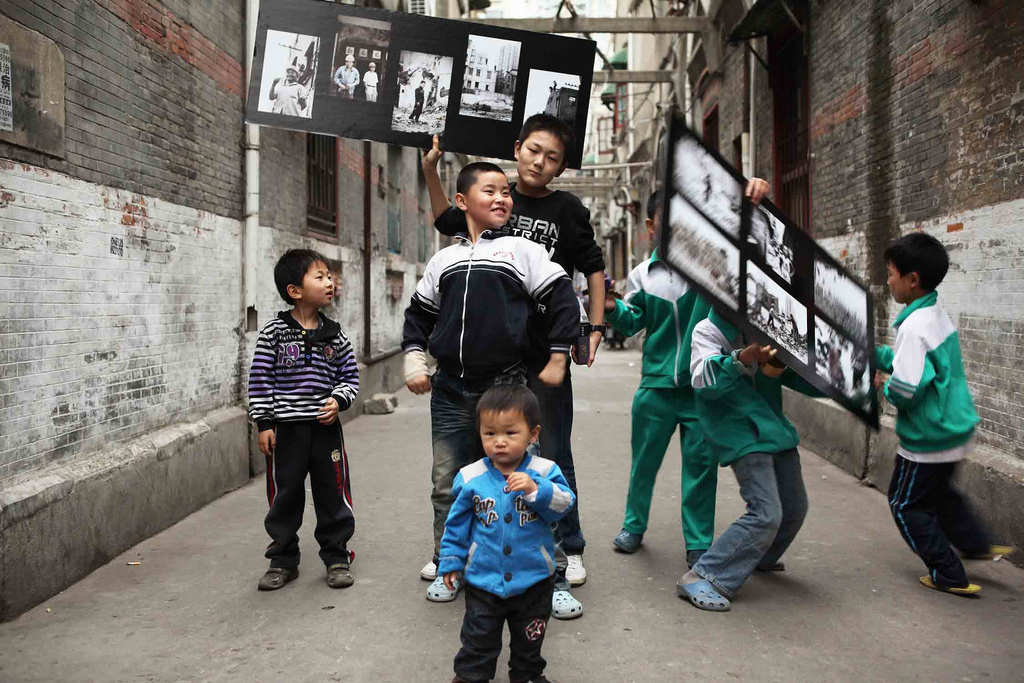 As some of you may know, I gave a showing (video and talk) of The Roving Exhibit at the twocities gallery back in June. Unfortunately, I had recklessly used the photo boards as shelter against heavy rain that evening. Softened from excess moisture, the boards subsequently hardened into a permanent curve. Given its sorry state, I can’t quite decide if I should offer it to some construction worker as a conveyor or to the kids in my neighborhood to go sledding on the grass.

On second thought, I could simply give the board to the gaggle of cheeky children I met on my last “rove” back in May, who showed me the wonders of a simple plank of cardboard.

After a long meandering walk with the photo boards through street markets and along noisy sidewalks, I had slipped into a longtang along Dongchangzhi Lu (东长治路) in Hongkou south of the Bund, drawn by the soundtrack of a busy Saturday afternoon.

Pushing past the ubiquitous public trash bins, I found the place to be almost cavernous. The structures and beams were taller and the alleys more generous in width. Or perhaps it was the presence of children playing in the midst that made the place look much larger than it really was. It was a nostalgic sight, reminiscent of my childhood days when ‘fun’ didn’t involve an electronic gadget. Nimble fingers were for bursting soap bubbles, not slaying virtual aliens. 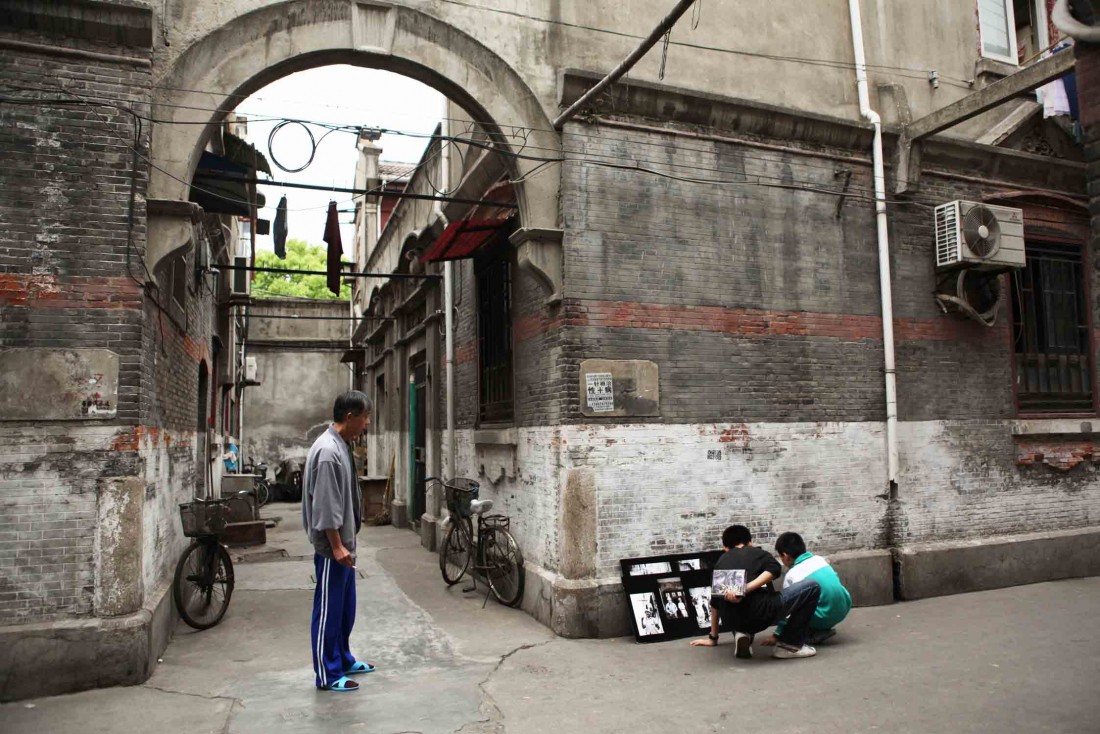 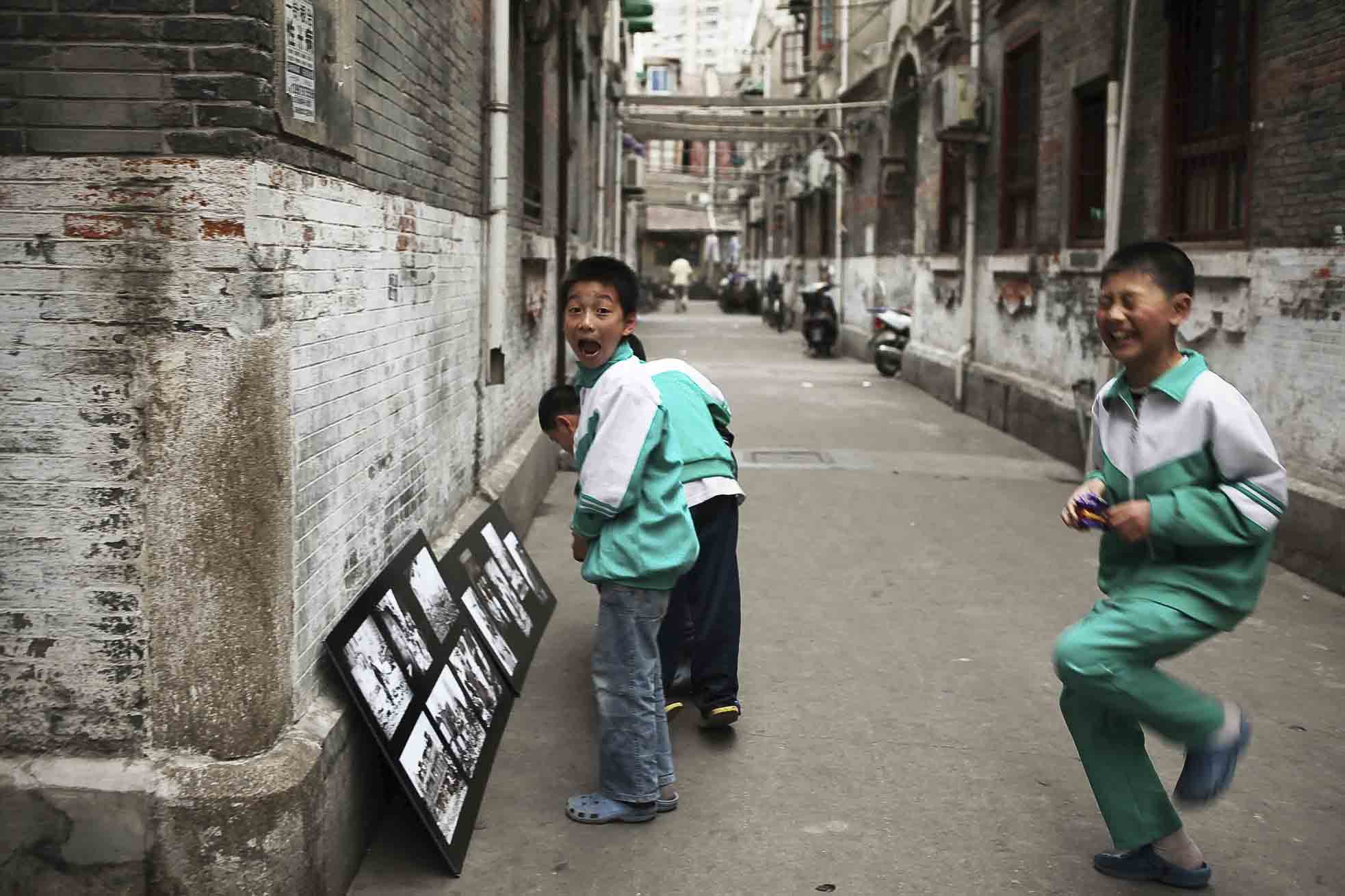 Like Pipe Piper, the children trailed after me as I leaned the boards against the wall and began unpacking my equipment. The next thing I knew, neighbors, relatives and friends were called upon to have a gander. The attention was fleeting after the customary “What is this all about?”

The children were less interested in the photos or what they represented, which was often the case. But the unwieldy nature of the boards provided plenty of entertainment. Through the boundless imagination of youth, the boards became wings of imaginary airplanes, fighting swords and magical fans that turned into deadly weapons etc. Receptive and energetic, everyone wanted to pose and play with the camera at the same time. We were loud, boisterous and carefree.

Just then, a loud honk pierced through the air. A grumpy man on an electric bike raised his fists, demanding we get out of his way in the alley. As he passed, a young girl reassured me, “Don’t mind him, sister.” she stuck at her tongue at the man’s receding back. “He’s crazy. Nobody likes him.”

All animals are comrades

“All men are enemies. All animals are comrades.” – George Orwell, Animal Farm, Ch. 1 At first sight, the chicken was sleeping. Next to it, the sign screamed…