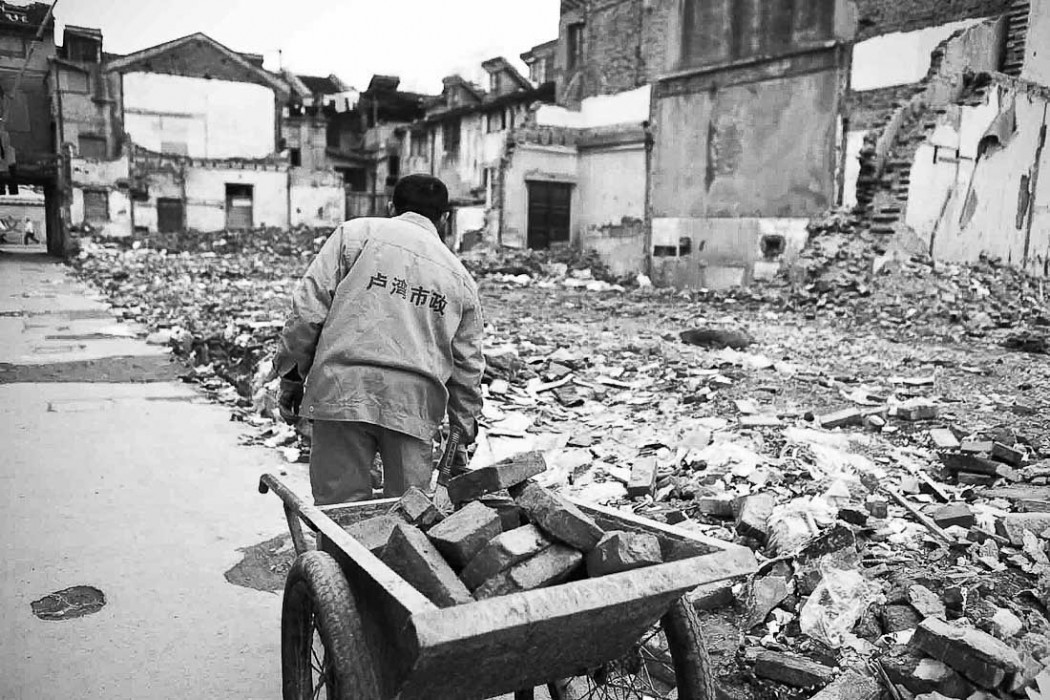 Located only minutes away from the hectic Xintiandi (新天地), the desolate longtang was as barren as the silence was deafening. February’s wintery cold only added to the vacuum.

More than two thirds of the shikumen in this neighborhood along Jinan Lu (济南路) between Hubin Lu (湖滨路) and Taicang Lu (太仓路) has been demolished. What had been weaving alleys crowded with residents a year or two ago was now a giant plot of land strewn with debris and weeds.

In a bright orange worker’s uniform, he looked like a traffic cone amidst the many scattered piles of brick. Behind him, the iconic stone arches of the remaining shikumen were prominent but dull with age. Their expansive entrances were a tell-tale sign of the wealth of the original tenants when they were first built.

Hunched over, the man was searching for something in the ground. The back of his uniform had “Luwan municipality (or district)”  emblazoned in the back.  As I neared, I noticed he was wearing thick gloves with a blunt instrument in hand. He picked up bricks, examine them and scrape off layers of dirt, finally tossing them a nearby wheelburrow.

Why ignore the perfectly fine looking bricks in then nearby piles? I wondered, and plucked a solid brick from a storey-high pile to give him, like a child who had discovered an intriguing piece of trash for the first time.

He smiled but shook his head. The good bricks were reserved by the demolition company which will haul them away to be reused, he said. He wanted bricks that were discarded by the workers but in good enough condition to build a temporary wall elsewhere.

And it couldn’t be just any kind of brick. His preference was for older clay bricks, which had been baked fierily in the early part of the 20th century, and held up better than the grey cement ones. To prove his point, he hacked off a corner of a brick, revealing a fresh, almost bold, reddish hue. The clay was so densely packed it looked brand new.

He continued, “These bricks should be over 60 – 70 years old, German made too.” He tapped one that was engraved with the word “Lun Hing” which sounded more like a Cantonese firm than a European one. Later, no amount of online research revealed the name in question, and perhaps some rifling of old reference texts will be necessary.

As old houses are demolished, the bricks one finds can be very revealing from the color and texture (red clay to grey stone), to the sometimes mysterious hieroglyphic symbols, Chinese characters or untraceable English words. Regardless, good quality bricks that they are, their life span can be long. For one, they transition from being part of a wall of someone’s home for decades to that of a tempoarary filler used to seal the entrance of a shikumen to prevent squatters.

As the man wheeled his harvest away, I walked along a temporary wall made entirely out of recycled bricks, a mix of grey, red and wet cement holding it all together. I traced my finger around the bend, only to reach a faux brick wall made out of cardboard, upon my disappointing exit.

* It should be noted that Luwan will no longer be a stand-alone district, and is to merge with neighborhing Huangpu district as of June 2011. 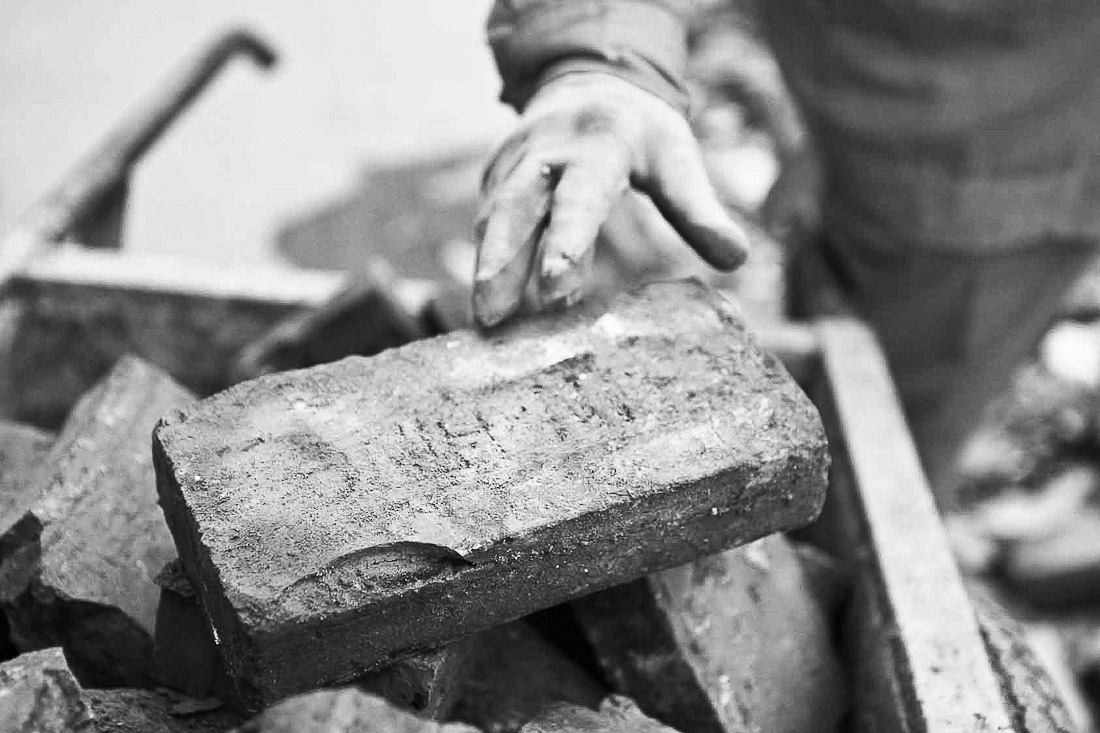 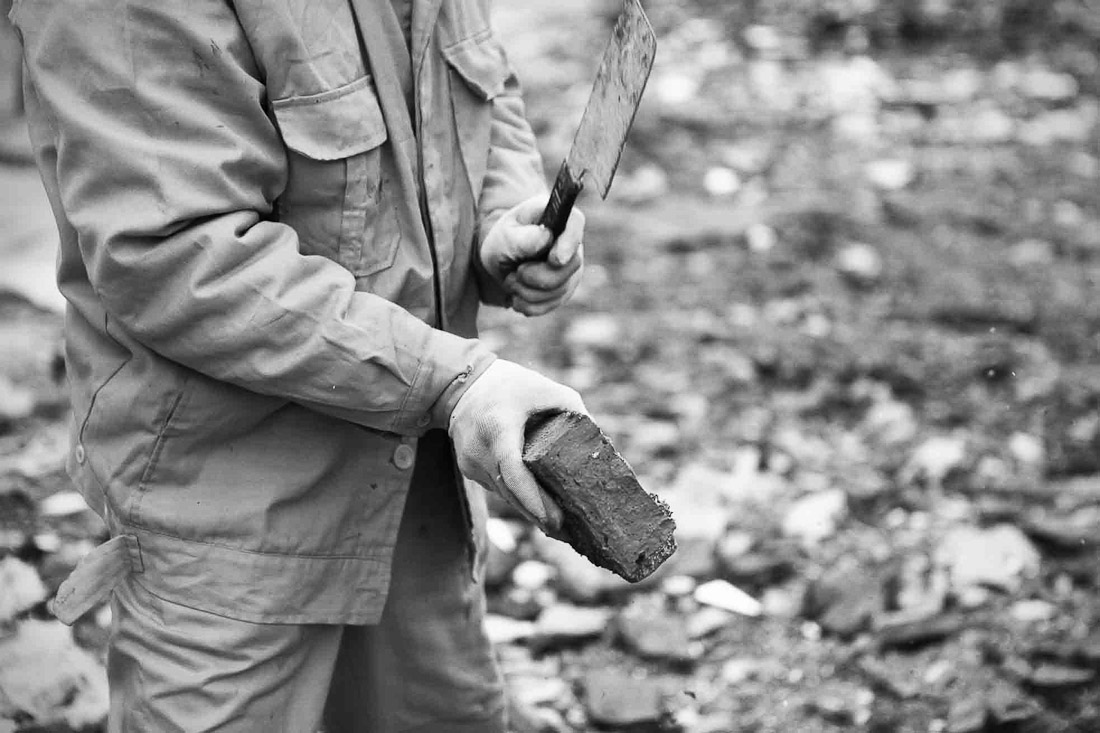 It’s official, summer is here and everyone is on vacation. Couple that with the allure of the World Expo, friends and family are pouring into Shanghai in…