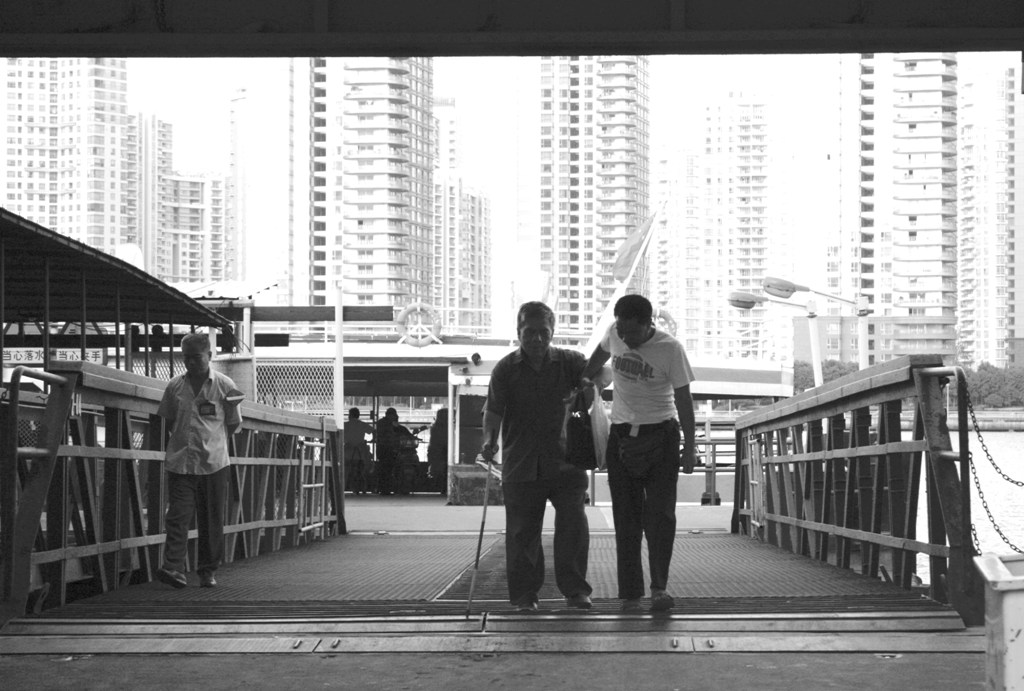 I was running for the ferry when I came up alongside an old man. He was blind so a kind dockhand helped him on board. As we bobbed across the Huangpu River (黄浦江), the old man sat silently clutching his cane as if listening intently to the small waves lapping at the ferry.

However, when we alighted on the other side, the dockhand had to return to work and positioned the old man physically toward his destination.

And so I stood there, watching the old man tap his way alone toward a major intersection.

Where are you going, Grandpa? I asked him. He cocked his head, a little uncertain of how to react to me. To the bus stop, he said. May I help you, I asked and then lightly gripped his arm.

I wonder what he felt when a hand would purposefully hold his arm. Is it instinctive fear or a rush of warmth?

He told me he was visiting friends in Pudong (浦东), east of Shanghai, though he rarely left his house. It takes about 2-3 hours for a one-way journey for him which would otherwise take about half hour by car.

Just as we approached the stop, I saw his numbered bus pull up. I signaled to the driver to wait up. The sullen looking driver looked right past me and pulled away.

Reduced to waiting, I sat the old man down on the bench as he told me about growing up in Shanghai. As his eyesight deteriorated, he missed much of the changes the city had undergone. He told me how proud he was of Shanghai and what a modern city it had become, according to his neighbors.

Suddenly, he clamored back on his feet. Best to wait standing, he smiled, the buses don’t always wait for you.

Finally, his bus arrived and the old man struggled up the bus steps. I offered to help him all the way home but he didn’t want me to spend money on the fare.

All I could remember was the back of the old man, covered in dust from when he sat on the bench.

Standing by the side of the road, I suddenly found myself crying. For the lack of kindness you often witnessed in large cities, and for the resilience and optimism that some people held, even if they deserved so much more.

Behind the camera: Fiona Reilly on street food photography

Armed with both a camera and an adventurous appetite, Fiona Reilly is fearless and passionate about street food. She writes LifeonNanchangLu.com which exhaustively details all the street food she has tried…