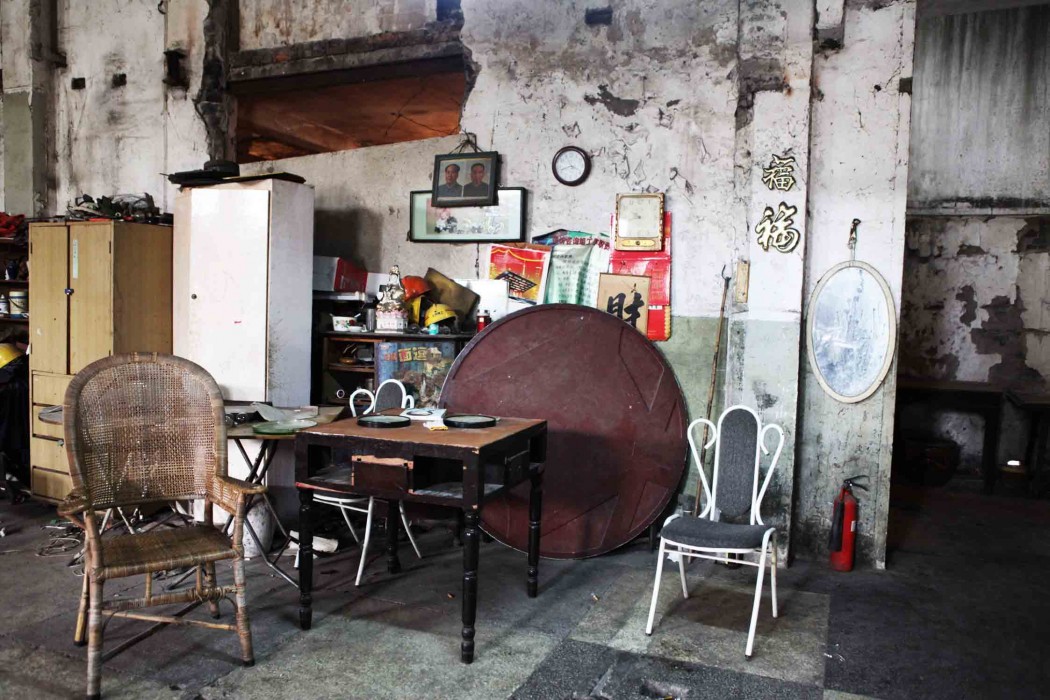 There was no reason to have entered what looked like a dumpster along Meizhu Lu (篾竹路), north of Wangjiamatou Lu (王家码头路).

Until a small head in pigtails poked out from behind the rusty doors and stared at me with small shiny eyes. I realized that there was no odor, or at least, it wasn’t pungent. As I pushed past the entrance, I found myself in a cavernous warehouse where makeshift rooms lined upon the side, assembled from a variety of wooden doors, corrugated sheets and curtains. 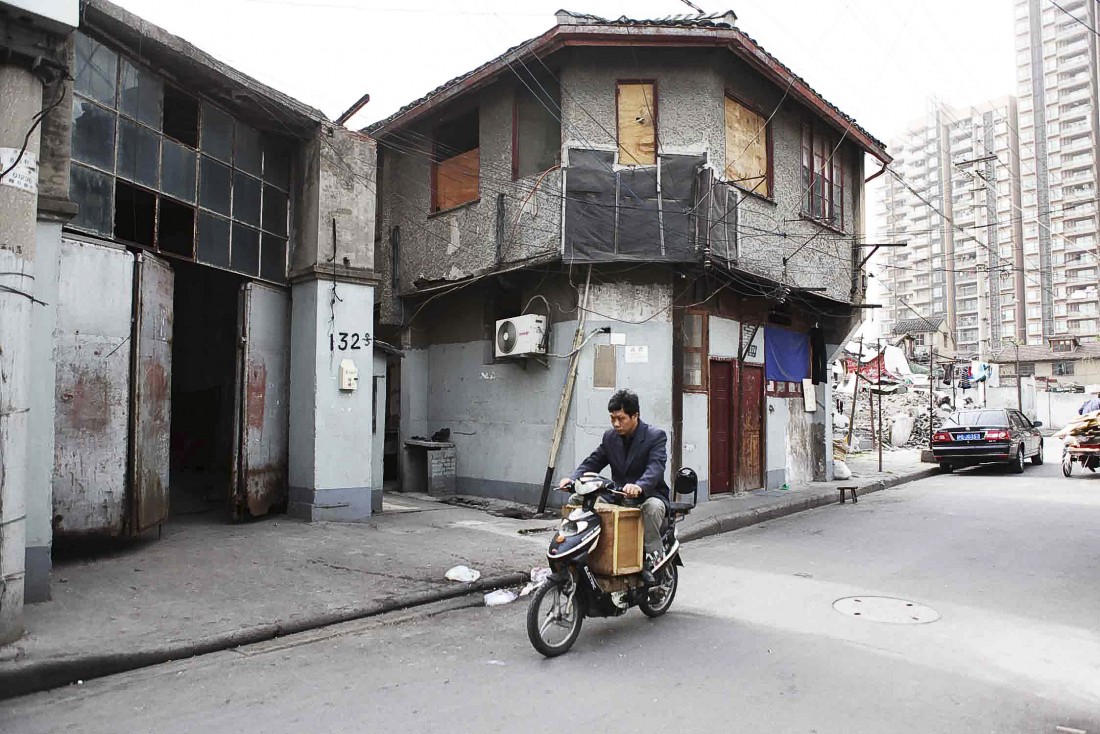 The television was blaring in one room while two young girls were doing their homework. A man was napping next door and I could hear the clatter of mahjong tiles behind a closed door. Nearby,  fresh vegetables were laid out on a table ready for dinner. Across was a small meeting area filled with loose, old furniture.

More than two thirds of the space was filled with vast collections of wooden beams, metal scraps, steel rods, glass panes and bottles and much more.

Where there is major demolition happening, be it residential or old factory spaces, there are scrap collecting operations that follow. Whether it is the lone peasant picking through trash with a pushcart, or the scrap mogul who owned a fleet of rumbling trucks to transport high-valued materials to even large collection centers in Zhejiang or Jiangsu, the scrap business was an important livelihood for many. 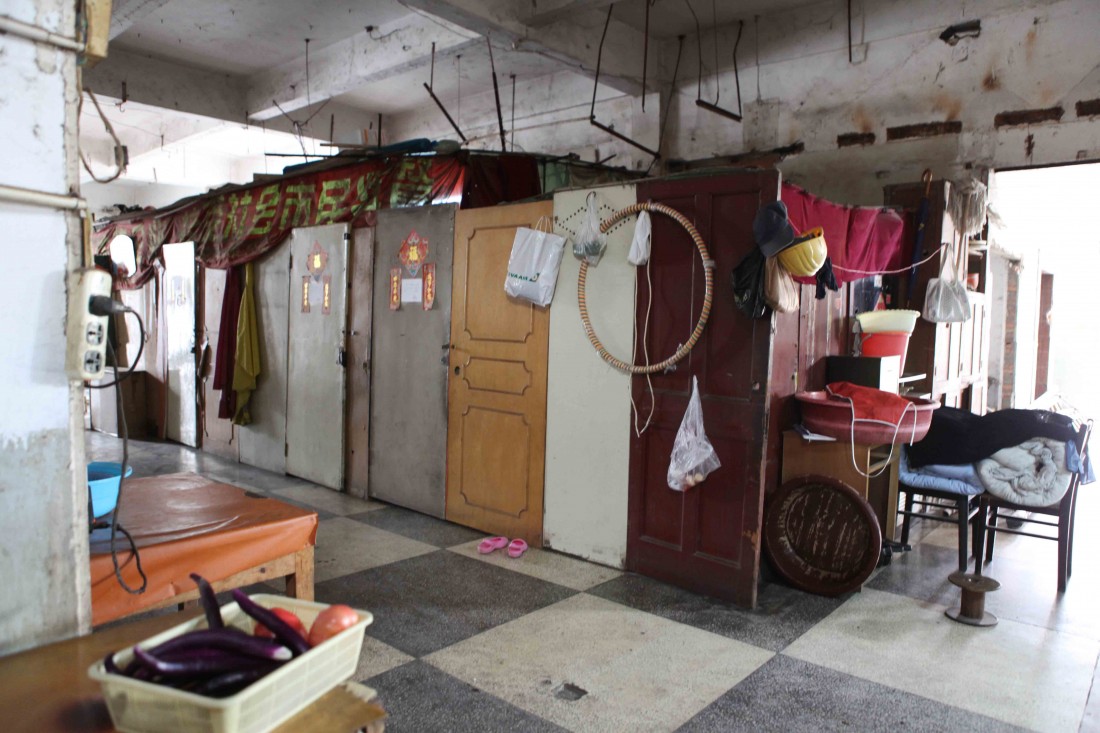 As such, temporary migrant enclaves would emerge to make their homes in these very scrap collection zones across Shanghai. For many migrant workers and their children, home was where they could find rent-free or at least cheap rent space, be it in abandoned factories or makeshift rooms in half-demolished homes with minimal amenities and substandard hygiene. As of last count, the “floating population” (流动人口) or migrants that spend less than 6 months each time in Shanghai make up 37% of Shanghai’s 22.2 million population.

The set up of their accommodations took various forms depending on the size of their operations. Men did most of the manual labor of sorting and lifting scrap, women pitched in while having to do laundry and cook meals. Inevitably, they grew into large family operations with relatives, neighbors and friends from nearby hometowns joining in, each with a role to play.

Depending on the state of the buildings, the migrant workers would take ownership of all corners on different levels. I’ve seen rooms demarcated by nothing more than a curtain and mattresses were laid out as beds on the floor. Meals were often cooked in as a large group, a boisterous and crowded affair. As the plumbing had been destroyed and toilets ripped out, one conducted one’s personal business out in the bushes. As the upper levels are progressively stripped for materials to be sold, and hygiene levels deteriorate, people would crowd towards the ground floor (hence the makeshift rooms) until they are forced into another abandoned building. 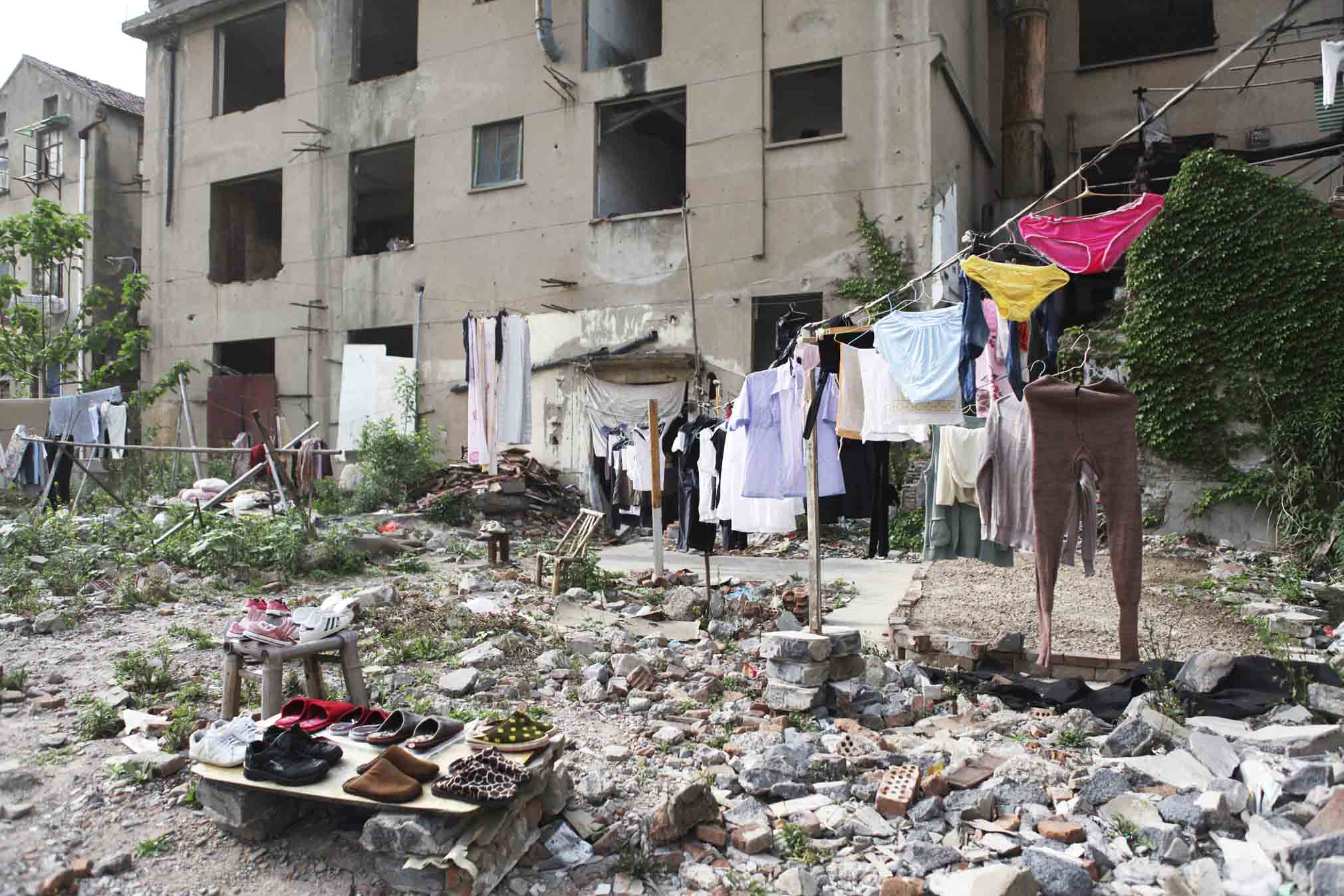 Outside this particular warehouse, a woman was hanging laundry. The rest of the building had been hollowed out, evidenced by exposed steel rods snaking through the ripped-out walls. The young mother was from Anhui, as were the other families. She had been in Shanghai for nine years, the last few in the very building. Her elder daughter studied in Shanghai while her younger son was back in her hometown.

Was her daughter doing homework in the room? I inquired. She started laughing. No, she was on her way to attend a concert of some Taiwanese pop star. “60 RMB a ticket! So expensive.” she exclaimed, as she pegged a pink shirt to the laundry line. “But she is a good girl and it was the cheapest of tickets. I decided she deserved at least that.”