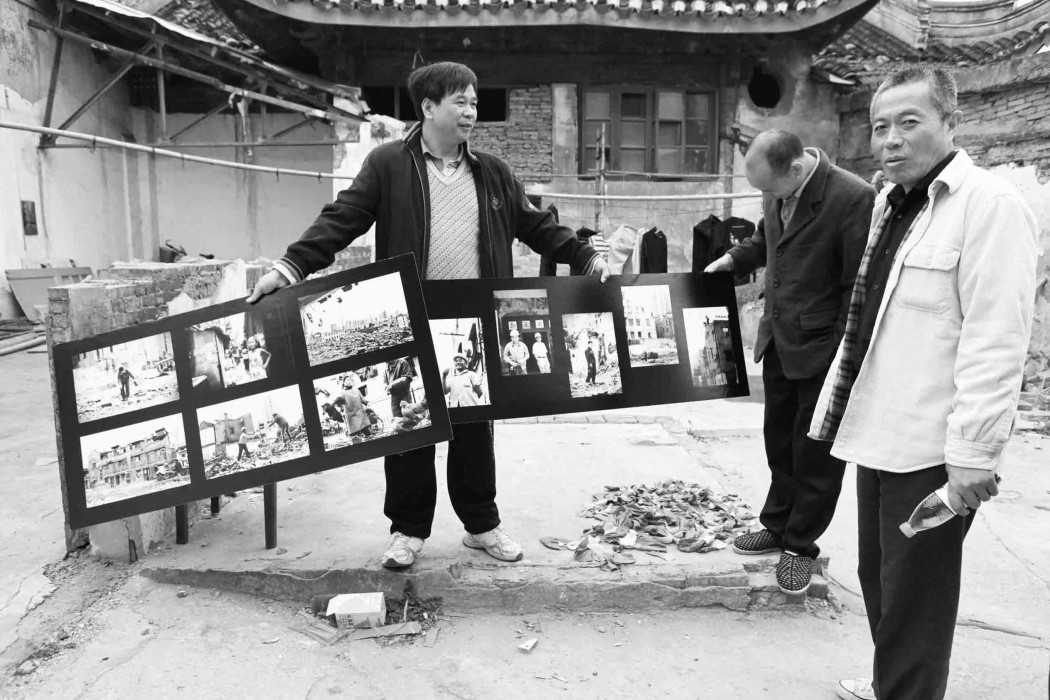 Amongst rubble and weeds, I didn’t feel myself in metropolitan Shanghai. I felt like a travelling merchant making a long journey through empty fields, never knowing who I might meet, friend or foe?

I came across a few migrant workers who were making their way to lunch. Their curiousity made me stop and I unfolded my wares to begin a short show-and-tell. It started to drizzle and suddenly, the boards felt more handy as shelter than art.

Yet, I had a thought, to photograph the boards against the very background I had shot a year before. No one entertained me, except for this kind gentleman. Thumbs up to you, sir.

As a segway, the grim weather yesterday kept me indoors meeting a deadline for a book chapter on street photography in Shanghai. Often, musings like these turn into an inevitable ode to Shanghai for all its quirks and craziness.

It reminded me of the short essay I wrote for a Taiwan travel magazine last year. It was translated into Chinese, so I thought I’d share it here in both languages for your reading pleasure.

The only thing I would point out is that we all grow in our perspectives, and I’ve done a bit of growing this past year where the city is concerned.

“The way I see Shanghai” by Sue Anne Tay

I have always lived in cities.

Before coming to Shanghai, I studied and worked in Los Angeles, Washington DC, New York, London, Hong Kong and Moscow and travelled to fulfill an enduring wanderlust. Growing up in Singapore, there was nothing more exhilarating and natural than to be in the middle of the hustle and bustle of a city.

After almost 9 years in the US, I felt I needed to return and rediscover the Asia I left. I always wanted to work in Mainland China, which for a Singaporean Chinese, I knew would be both familiar yet foreign. Fate was such that I landed in Shanghai. And after 2 over years here, I realized, I didn’t pick Shanghai, it chose me.

The city has a raw energy that could rival the frenzy of New York and had a wild optimism about it that could only exist in an emerging country. There were so many opportunities and risks to be taken – the sky was the limit.

Sometimes, when you look behind those tired faces of people bicycling on the streets, riding on buses and subways, it was the look of determination to not just make it in life, but to make it in Shanghai. Life can, no, life must, get better.

Yet in that process of hurtling itself toward a modern utopia, Shanghai for all its rich history, was shedding many aspects of the city that did not comply with that vision. This was evident in the way the city was demolishing old houses and buildings and replacing them with gleaming skyscrapers. The 2010 Shanghai Expo was just one of the key drivers, speeding things along.

I wanted to know how the city’s urbanization was affecting ordinary people. How different was it from Singapore or the other cities that I had previously lived in?

I began photographing old neighborhoods around Shanghai, especially life in the longtangs, where there were many beautiful Shanghai-styled shikumen built as far back as the 17th and 18th centuries. I found myself engaged in endless conversations with people, young and old, Shanghainese and newcomers from poorer regions, each with a different story to tell.

It takes a bit of time to penetrate the curiosity, sometimes hostility but after a few probing questions, they opened up. An old Shanghainese man who grew up in Hongkou told me about Indian Sikhs who used to live in the area before 1949. A construction worker from Zhejiang told me proudly of his daughter who was the first in his family to enter university.

I photographed, over months, the demolition of entire longtangs in Hongkou and Old Town. One by one, families, after negotiating their compensations from governments, left and entire communities scattered to the winds to live out the next stage of their Shanghai dream. A remaining few fought developers and government authorities, demanding better compensation and their rights as city dwellers.

Nevertheless, most Shanghainese accept that this is modernization, and for some, an upgrade to better living conditions. But for others, it was bidding goodbye to family homes that that the next generation would have no idea existed, and exiled to the suburbs.

Change, especially in Shanghai is an unstoppable behemoth. Its residents hold the city’s success with much pride. Yet, I find myself fighting time and the wrecking ball to capture certain aspects of the city, doomed to be wiped from the city’s memory. But the stories remain, those colorful and wonderful stories. These, nobody can erase.

Conversations: Peter Harmsen on the Battle of Shanghai in 1937

For a long time, the Battle of Shanghai (淞沪会战) was just a footnote in my layman’s knowledge of the Sino-Japanese war. Having read Shanghai 1937: Stalingrad on the…