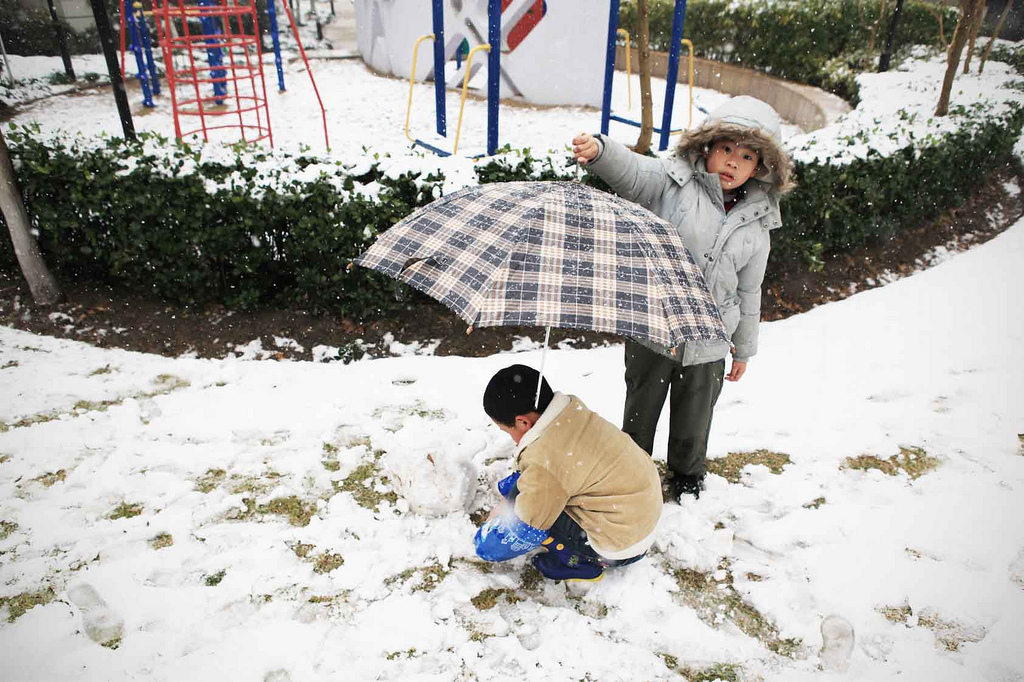 In the three years living in Shanghai, I’ve never really encountered a good snow day. You know, the kind that can silence a city, or in the case of Shanghai with its over 20 million residents, muzzle the few that a hard snowfall can drive indoors. I miss that heavy silence and emptiness of an ongoing snowfall, like a perfect vacuum in outer space.

I savoured a brief moment in the garden of my compound yesterday where the grass was coatedwith a light dust of white. Traffic was sparse for no parent would allow their child to catch a cold in the deceptively chilly snow.

Save for the little boy I spotted from my balcony. A dark spot was moving patiently across the patch and back again. It was a little boy rolling a snowball to birth a snowman. I felt compelled to join him even as a spectator.

By then, a few residents had taken to strolling around the garden, on the small knoll and around the pond which had frozen over. The palette of neutrals was enormously pleasing.

The boy’s snowman was modest despite his best efforts, evident by his small hands which had turned red from the cold. By then, he had armed himself with an umbrella to focus more thoroughly on his endeavour. It was around noon and the snow kept coming down, softly but steadily.

Nearby, another young boy was pelting his nanny with small snowballs. He mimicked the first boy in attempting a snowman, who by this time was comically fighting the uncooperative umbrella while grappling with the snow.

“Why don’t you give him a hand?” I suggested to the second boy who immediately went over and lifted the umbrella by the tip. A stunned look turned to grattitude and finally, the body met a head and the snowman was completed.

The two boys then departed separately, leaving a small and sad snowman behind with two thin arms and no eyes or mouth.

Nearby, a mother kept a watchful eye over her son as he tossed pebbles into the pond. Lest he, like any of us, would be curious to test the sheet of ice on the pond.

A parking lot in four frames

I recently had an appointment at a hospital located along Fengyang Lu (风阳路) off the Northsouth Elevated Highway Road (南北高架路). One look at the numerous moaning patients spilling out…