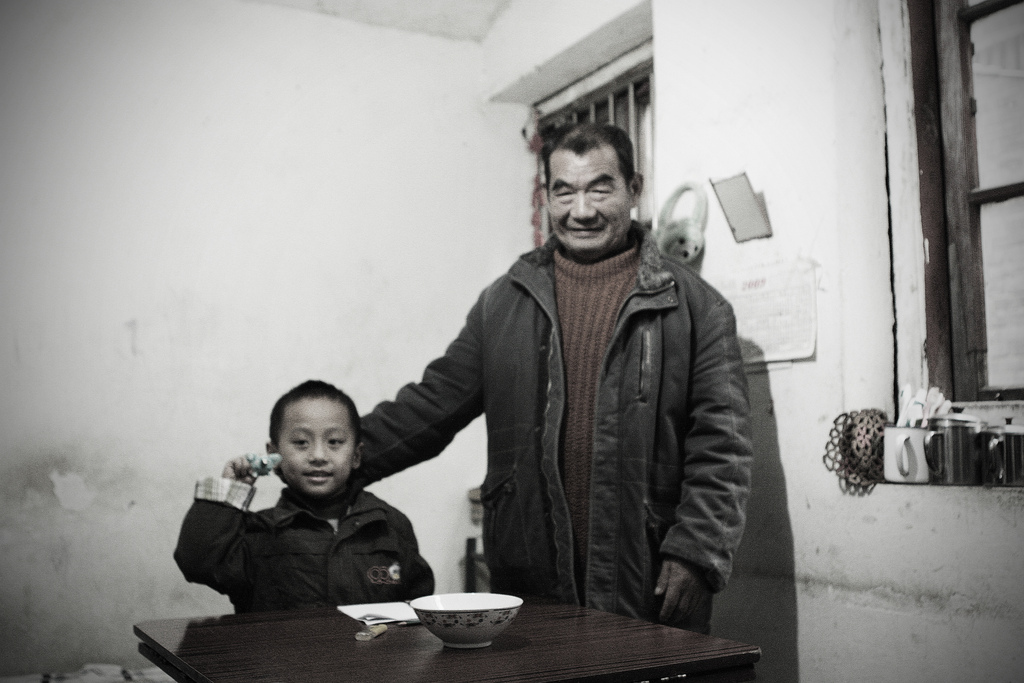 The room could only be described as unremarkable.

Enclosed by bare and washed-out walls, there was a simple bed, a table and a chest of drawers with the minimum of houseware. It lacked a woman’s touch but I didn’t want to probe as to the whereabouts of his wife.

Mr Song was a chatty fellow, as some retired men are when you catch them in a moment of leisure. He agreed to show me his home, a tiny room on the second floor of a shikumen (石库门)*, where the stairwell was dark and the steps impossibly narrow. He was situated along a very busy and crowded thoroughfare along Baoding Road in Hongkou.

His grandson, Xiaorao, a mischievous and energetic boy, was playing with his toys on the bed. Mr Song lives with and cares for the boy while Xiaorao’s parents work and live in Baoshan, 2 hours north of Shanghai. This was a common living situation for many families in China.

Sliding into his 60s, Mr Song has lived in this house since he was born. He was very animated when talking about the history of the area. After a long explanation of the significant presence of Jews and other Europeans during the Second World War, he then pointed north and exclaimed, “Did you know there were Indian people living in the building two blocks over?”

I assumed he meant Sikhs** who were hired by the British to guard property and people during the days of yore when Hongkou was populated by Europeans as early as the 1920s.

“No, no. I meant the ones that sold milk from door to door.” He later said that as a child, he used to sneak through the gates and watch the Sikhs milk goats in the courtyard. As if the thought had just popped into his mind, he sniggered cheekily at the memory of lost youth.

At that moment, Grandfather and son looked so alike despite the gulf of decades between them.

* Shikumen (石库门), or translated as “stone gate”, is a style of housing unique to Shanghai that blends Chinese and Western structural styles.  The influences could be found in everything from intricate carvings in wooden doors, stone archways and door steps.

** Sikhs were known as 紅头阿三 (hong tou a san) or literally transated, “red head a-san”, the ‘a-san’ being a colloquial term for a 3rd class citizen in the 1930s. Sikhs were idenitified by their turbans (red turbans worn by police and patrollers and yellow by guardsmen). The Sikhs were regarded by the Chinese (and Europeans) to be of a lower class because of their servant status.

The last few days were well-spent lounging on the beach facing the Straits of Hormuz. The weather has been most welcoming in Dubai, balmy low to high twenties depending…