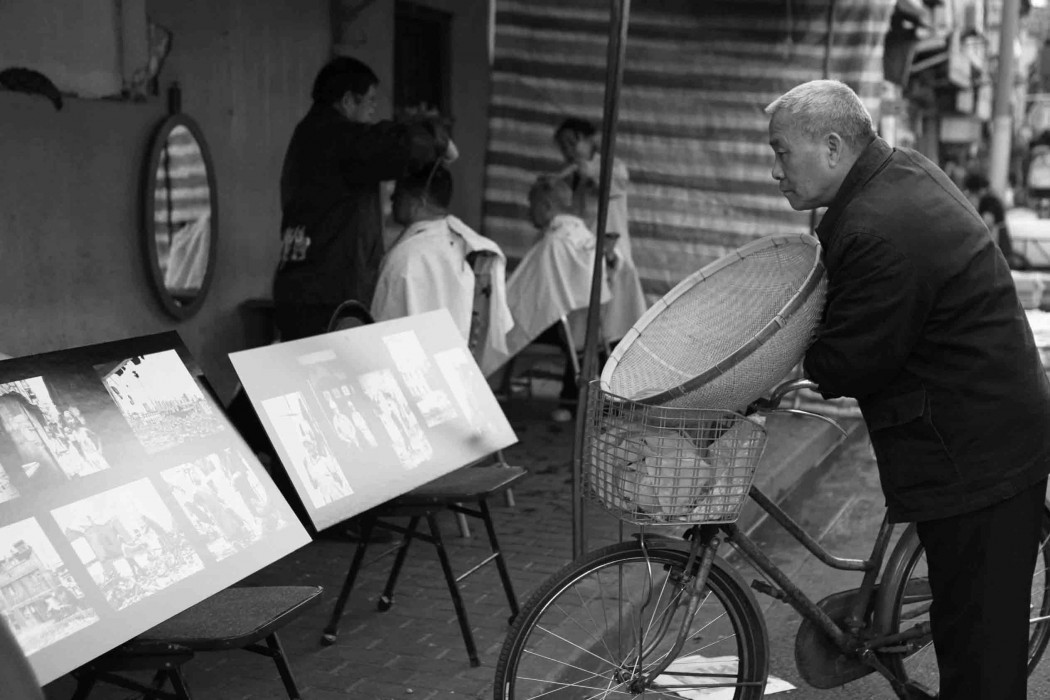 My first patron hovered quietly at first, peering over my shoulder as I set up my photo boards. Timidly, she asked if I had taken the photographs. I nodded.

Pondering a while more, she suddenly blurted, “It’s okay, I guess. Your photography needs a bit more work. Like that photo of the chicken hawker for example, the man next to her has his head cropped off. You shouldn’t do that.”

Satisfied with her two cents worth, she ambled back to her makeshift stall selling socks and kitchen towels. A bit thrown off, I thought to myself: Well, this should be interesting.

Earlier in the day, I had picked up my freshly printed photo boards and decided that there was no better time than to begin the Roving Exhibit.

For the inaugural exhibit, I chose to set up in the street market in Tilanqiao which I photographed frequently. I knew many of the vendors and familiar territory bode well in case of any potential “interventions”.

Finding good real estate on a busy sidewalk of a street market is hard. Avoiding Dongyuhang Lu (东余杭路) due to the mess of hawkers selling vegetables, fish and poultry, I settled in on Anguo Lu (安国路). Street traffic wasn’t too overwhelming and was made up of mostly vendors selling sundries and residents playing cards or carom.

I negotiated the use of two old rickety chairs from a husband and wife street barber duo to hold my photo boards. The lady boss cheerily said it should provide some entertainment for her waiting customers. The husband seemed less enthused. 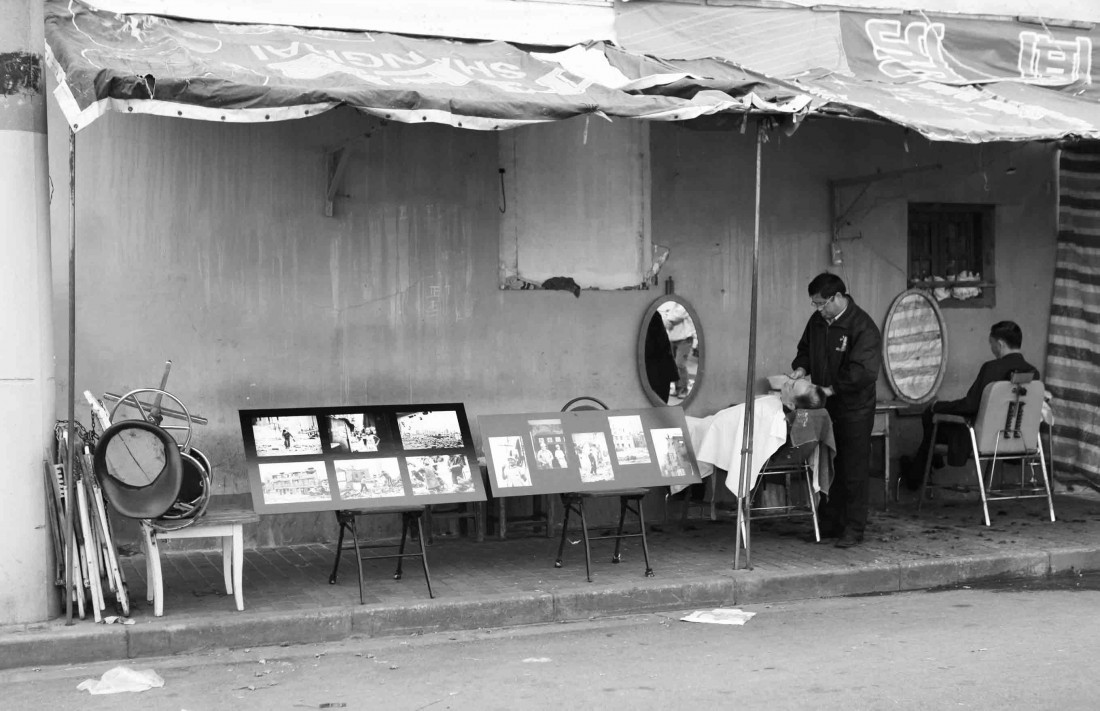 Traffic was halting initially but the ebb and flow of patrons was diverse if not amusing to watch. Neighbouring vendors selling a kaleidoscope of knick knacks popped over when they had a free moment while keeping a watchful eye on their wares.

Sometimes, cyclists would wheel toward the boards or just slow down for a glance. My area was kept clean as the street sweeper would absently sweep the same spot as he examined the photos. Lingering patrons sat on stools while waiting for their haircut next door. Customers of nearby vendors had an occasional glance but found shopping a lot more interesting.

Reactions ranged from scepticism, amusement to bafflement. The first and most common question posed by residents when they pass by was: “What is the point of this?” I spent much of my time explaining the intention of the exhibit and describing the location behind each photo. It was entirely free, or just art’s sake, I added to one gentleman in particular. He eyed me suspiciously as he slowly walked away. 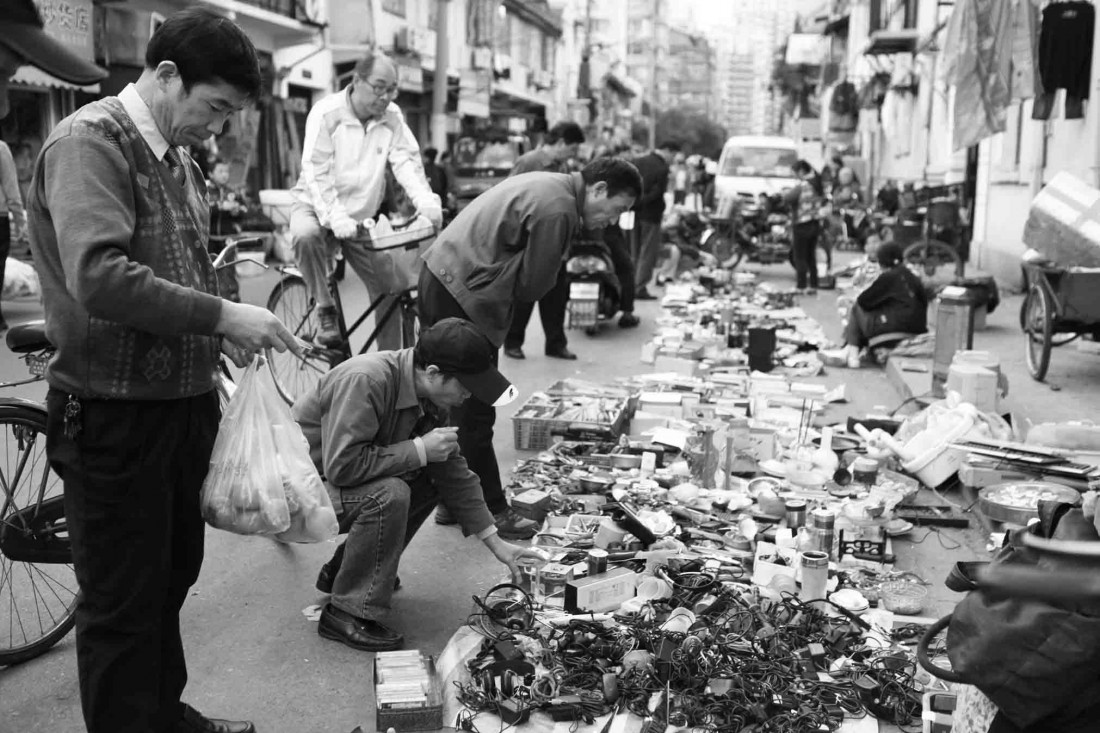 It was interesting to observe how the conversations essentially broke down into two groups:

Shanghai residents were often more conversationally engaged with the photos. They immediately identified the idea of 动迁 (dong qian) – the process of moving out of old homes after government negotiates a settlement. Naturally, the discussions almost always drifted toward real estate, a given in China, the impact of 动迁 (dong qian) i.e how much or little money one can make from it, how to prepare for it etc.

Due to the fact that I spoke no Shanghainese, or appeared to live in the neighborhood, the Shanghainese residents would engage amongst themselves. A few would hold court in front of the photo boards, some taking upon themselves to introduce and explain the work. Feedback ranged from cursory acknowledgement to extensive critiques on how and what I photographed. “Why are the colors like this?” “You need to have signs that tell us what they are.” “Why don’t you shoot this and not that?” This was not a place to seek effusive praise. 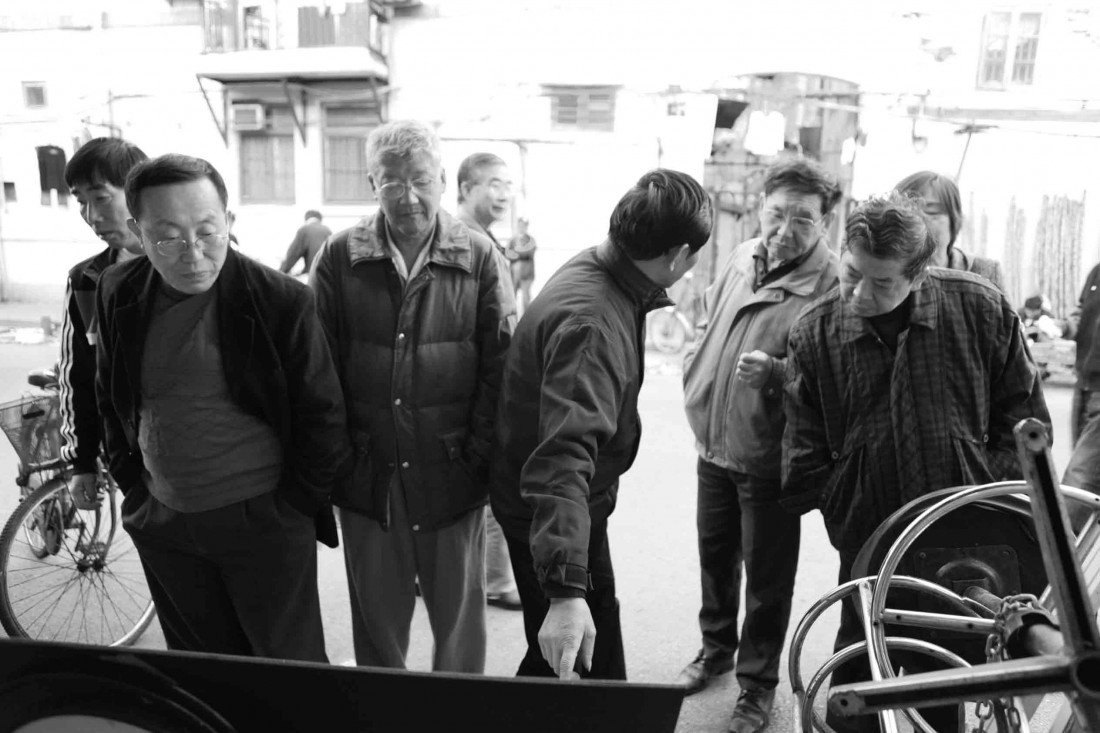 Memorable conversations too centered on camera equipment (they always, always wanted to know the cost of my gear) and one resident in particular, who worked with the local housing danwei, gave me his contact information while advising where else I should photograph in the area.

The other group was migrant workers, distinguished by their length of stay in the city and familiarity with Shanghai. They focused more on the the style and composition of the photos. Several noted details like colors, shadows and objects that others had missed. There were definitely some who focused entirely on cost: how much the camera and lens cost, the printing cost and if I had a job and how much I earned in Shanghai and if not, Singapore. It seemed natural, having left home for economic reasons, to sketch their world by value of what they can and cannot have.

The exhibit lasted for about 3 hours. The repeated conversations and swirling wind were tiring me out. As the skies darken and dinner time beckoned, the crowds grew but were mainly hurried. Without any street lamp to aid browsing patrons, I called it a day and packed up, bidding adieu to my gracious hosts, the street barbers, for their hospitality and chairs. 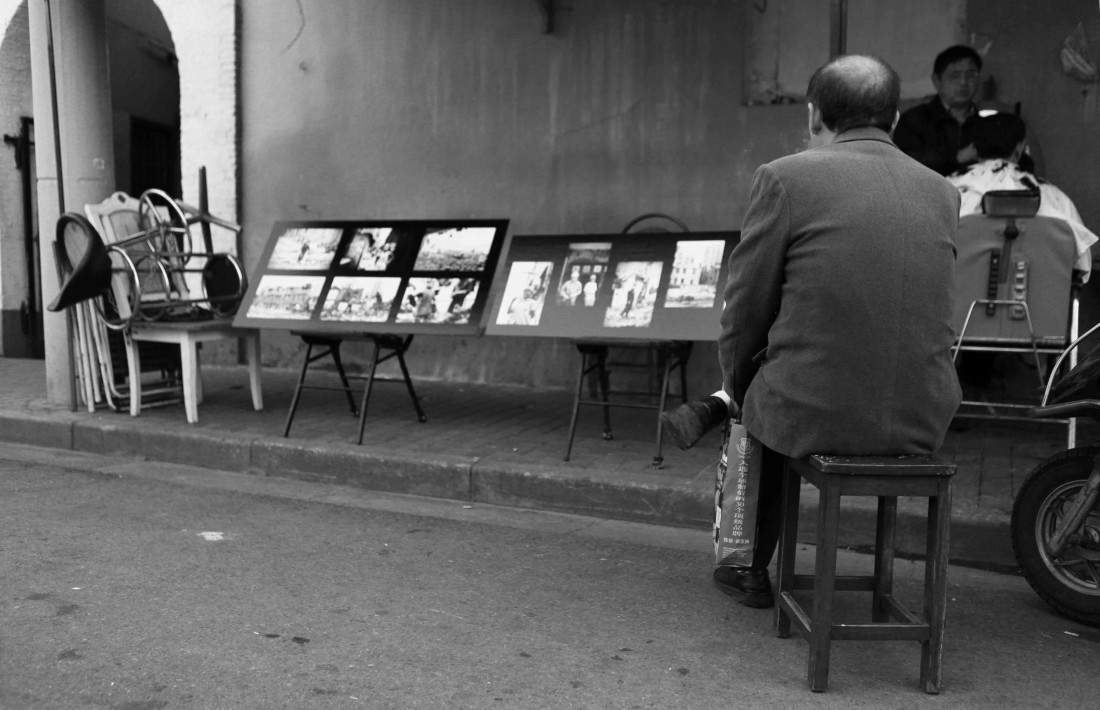 Learn more about the Roving Exhibit.

This past weekend, I met with Terence Lloren who runs “Growing up with Shanghai”, a project series of sound walks with young Shanghainese who grew up in the city in…