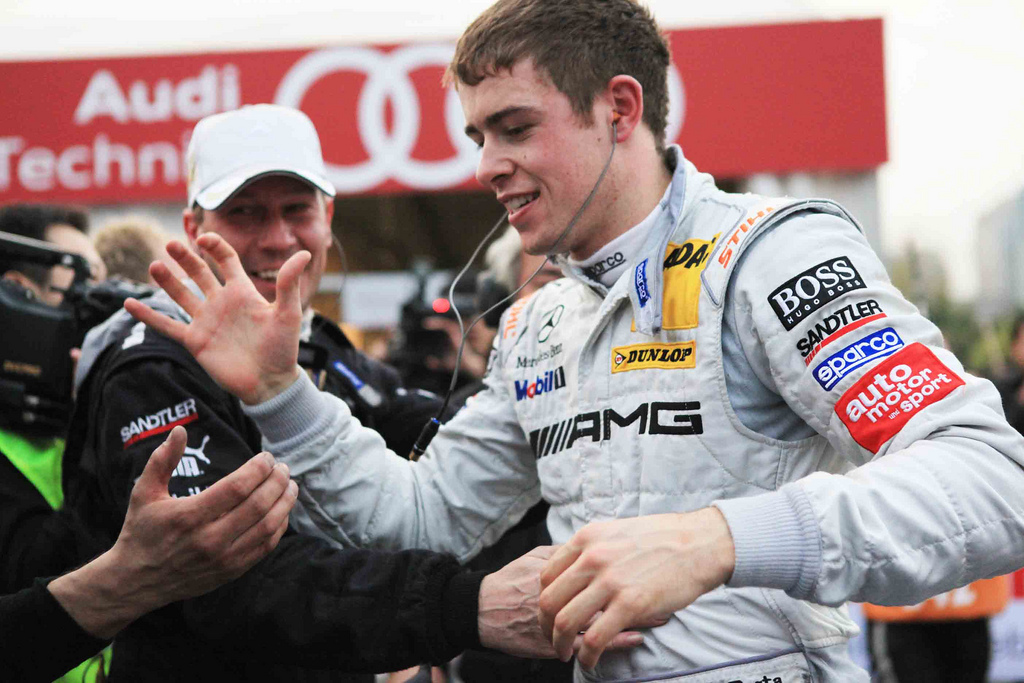 I particularly enjoyed the wide-eyed amusement and fascination by the predominantly Chinese audience who had gathered to watch the DTM. I mean, who wouldn’t with gleaming metal being wheeled out one after another? The audience ranged from luxury car clients or lao bans, who were gifted complimentary tickets, many of whom tagged along bevies of young girlfriends wrapped in knee-high leather boots, fur coats toting designer bags. To hardcore racing enthusiasts and pimply school boys and girls, the latter in giggle fits after having a driver autograph their notebooks.

The largest group had to be an audience who had not paid for tickets but enjoyed the race from behind metal fences, standing on every major corner of the race course. I refer, of course, to the workforce supporting the DTM organizers: namely the security staff and construction workers.

I’ve never seen so many rent-a-cops in one location before. There weren’t as many police as expected – the young and strapping kind with riding boots, aviator sunglasses and crisp blue uniforms. Even those present had a gleeful grin, some even armed with cameras themselves.

No, we were surrounded by middle-aged to past retirement men in dusty grey-blue security guard uniforms in various state of in/activity: sleeping on benches, smoking in groups and generally, gulping tea in street corners. For the most part, they seemed quite pleased to be there, herding tame crowds and enjoying the cool weather with plenty of metal candy at their disposal.

Then there are workers in charge of assembling the race who stood on lorries and pickups parked alongside the race. They had a much better view so much so that actual ticket holders clamoured on board as well. In the end, with less people attending a rather spectacular event, the mood was relaxed which made it easier to enjoy the thrills of the 60 laps of the final DTM race.

Of course, the ones with the best view had to be the local staff posted to the paddocks. I met a young gentleman who was a businessman by trade, in charge of measuring the temperature of tires that had just come off the wheels of the race cars in the pit stop.  He had volunteered through a contact, and wanted to have more action beyond a ticke stub.

Armed wth his nifty thermometer gadget, and me and my camera, we both agreed, as far as bystanders are concerned, we had the best view of all.

Action down at Dubai’s Meydan Racecourse

[imagebrowser id=25] What does one do at a racecourse besides the obvious activity of watching horses run toward an oatmeal bag at the end of a line? Gamble…