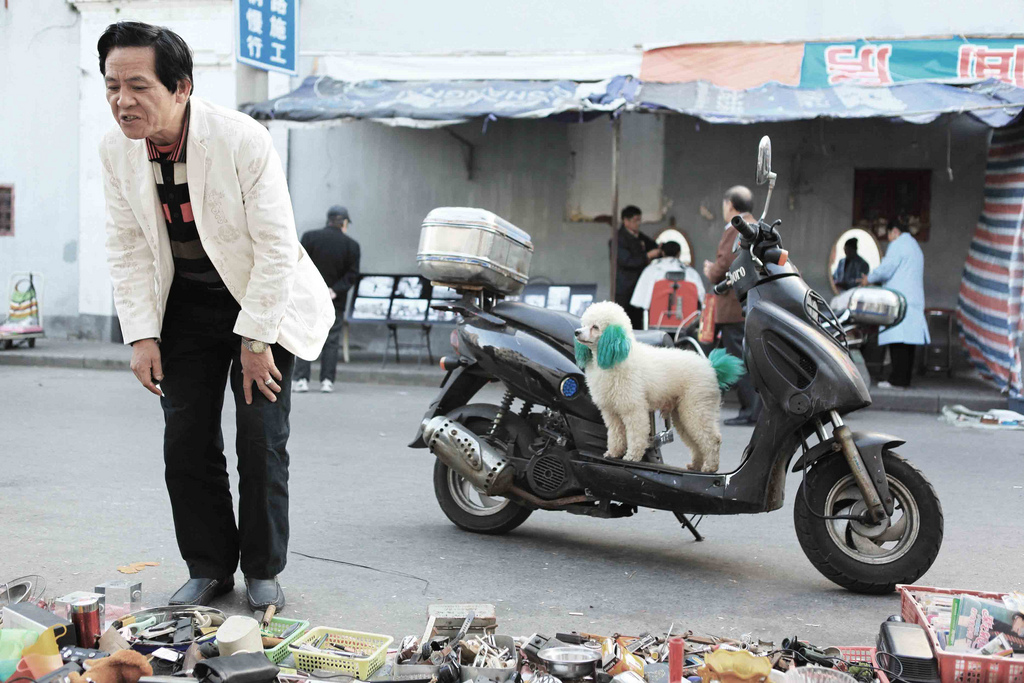 Update: Thanks to Jonah, Jens, Imansoe and budak for your comments. Blogger Ren Yue, whom I mentioned in the post has also responded via her blog (in Chinese). My response to your thoughts after the jump. Please keep them coming.

Liu Mao has kindly translated the below post into Chinese which can be read here. 朋友刘淼很好意的把这博科的文章翻译成中文。请看他个人的博科。

A few weeks ago, my friend Adam Minter over at Shanghai Scrap interviewed me about photography and collecting Shanghai Street Stories. I always appreciate people’s interest in the blog which in the course of writing, has resulted in new friends and collaborations, and endlessly fascinating conversations. One of which has been about street photography in China.

Most recently, Ren Yue, who is a prominent Chinese blogger of 1416 教室 on photography but more impressively, a professor in Beijing, raised some questions about street photography in response to my interview and the blog. I had mentioned that while I like the diversity of photo essays, street photography is a style I aspire to.

Citing an October article in China Photography magazine (中国摄影) which lists Shanghai and Shenzhen as the most popular cities for street photography, Ren Yue wonders how Beijing will ever make the list, given the city spends over four hours trapped in traffic each day, and much of it shuts down swiftly past 9pm? She also mentioned the frenetic nature of the streets in Beijing, which I would counter as hardly a bad thing, and how different is that from Shanghai?

The work of street photographers like Trent Parke, Elliot Ewitt and Moriyama Daito just to name a few (more in my blog roll) evoke a great sense of poetry, elegance, wit and creativity. Others like Matt Stuart, who was recently featured in New York Times’ Lens, composes his photos in a way that makes you laugh out loud or furrow your brow to pick out that one or two details that forces people to double back on the photo. And smirk some more.

But back to street photography in China. The genre (and style) is not yet as widespread in China’s cities as you find in Western cities especially London, New York and Paris. In a brief email exchange with Ren Yue, she acknowledged that street photography as a genre remains unfamiliar to most Chinese photographers even if they are aware of its reputation, or as she puts it, “熟悉的陌生概念”.

Of course there are always exceptions, like Shanghai-born street photographer Tang Ying who was also interviewed here on the blog. There is also an active group of avid street photographers in China who find the genre very appealing, and worthy of note.

I recently met up with a few Chinese photogs, all of whom contribute to an aptly named photoblog called ZaiJieTou (在街头) – literally “in the streets” in Chinese – which has tens of contributors generating streams of street images reflective of varying styles and perspectives.

Over Xinjiang food one night, these Chinese street photographers ruminated about the photography industry in China, shooting in Shanghai, their relationship with Shanghai as a city and how it influences their images, and their varying styles.

I learned a great deal that night and hope to continue the conversation across languages by presenting interviews with these few photogs slowly over the months.

Of course, I’d like to hear more from you if you have any thoughts on the matter, be it street photography in general or specific to China. Let’s see where this takes us. Cheers.

Updated in response to comments (10Nov) below:

– The ever-perceptive Ren Yue offered an elegant answer to the question of why street photography just isn’t that popular in China. My paraphrasing may not do her prose any justice …

… but the key gist is that maybe the element of street just simply does not exist in China. The essence of street photographer involves an individual meandering at length and observing his/her surroundings. But looking at the pressures weighing on Chinese society today, for dissatisfied and burdened young people, who can afford that leisurely state of mind required for street photography?

It is a very valid explanation but that is also saying that the arts in general would be unpopular because not enough people would be able to spare the time and emotion for it. China’s arts scene is very vibrant and its motivations are diverse as they are endless. So perhaps this is something very unique to the genre of street photography and how it is perceived or even known in China (or in general, ‘a beleaguered’ genre where photogs toll in obscurity, according to Nick Turpin)

– Jonah is right that we’re seeing more cameras, and expensive ones in China. Like Americans with their cars, bigger is better for Chinese consumers where cameras are concerned and DSLRs rule. In Shanghai, I see many local tourists wielding L lens on Canon 5Ds. In Xinjiang, so many tourists had complicated set-ups (and enormously long telephoto lens), you’d think they were shooting for National Geographic. Of course it is encouraging that we have more photographers who are growing into their own points of views through their work and in magazines like 中国摄影. The prevalent styles are still nature-oriented, ethnic-minorities interest, and individualistic (edgy, introspective and ultimately, young). If more Chinese are taking to photography, then it’s not unreasonable to expect more street work and unique street styles to emerge in China, I think we need to bide our time but I know I won’t be disappointed.

– On the issue of the general warmer reception to being photographed in China which the commentators have rightly pointed out. There are no cultural (unlike in the West) or religious (some Middle Eastern countries) taboos in  being photographed here in China. In general, people here are more curious about cameras as they become more ubiquitous and more expensive (hence coveted as a material object).

But a stronger reason is that people in China do not yet have a developed sense of the concept of privacy rights. It’s not a criticism, it’s just not feasible in large and populous cities and historically, not a priority for Chinese people. Embracing that as a photographer, there is less fear that your subject may feel violated and/or call in the police.

Yet after conferring with some local photogs, I realize that as foreigners, we have a certain leeway. Locals are more willing to accommodate our curiosity and sometimes, the language barrier works in our favor when people are unable to communicate their displeasure at being photographed. In many cases, they raise a hand or walk away rather than confront a photographer.

But photogs (local and foreign) have had trouble in the past (as have I), getting yelled at for shooting and in general, having people walk out of the picture. Their first reaction is, why are you photographing me, what is the point of it? As cities become developed, people will have a greater sense of their “rights” and need for personal space. We will then see greater resistance to having a lens trained on them.

A negotiation in bread

The jolly baker was a fixture at the market where teaming masses of human bodies bumped and jostled their way around. He always had a smile on his…