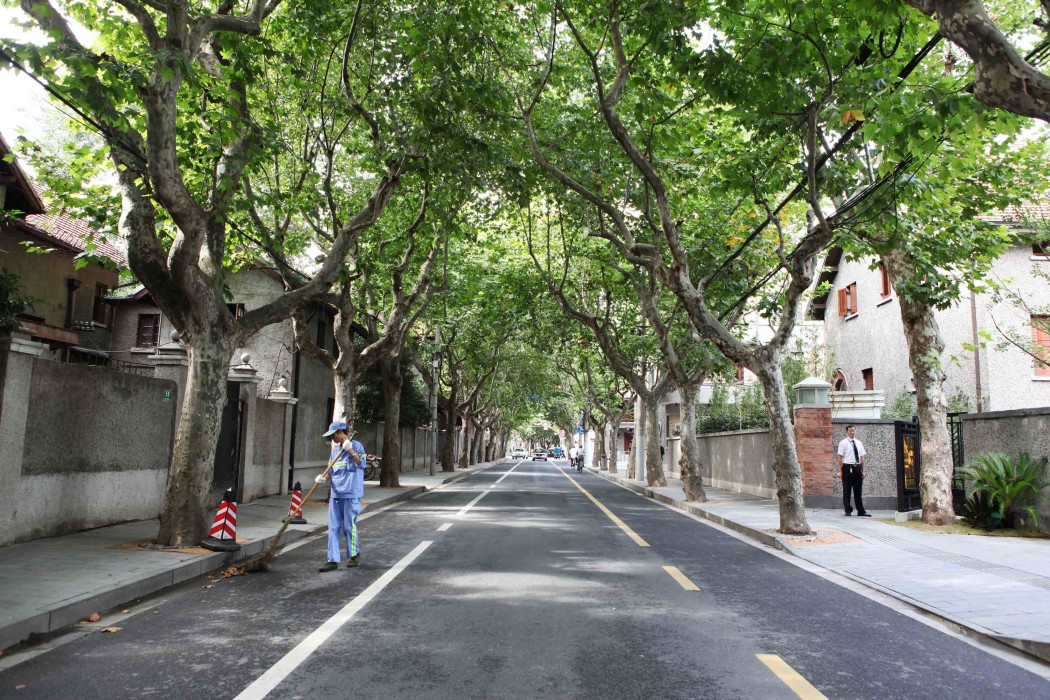 The contrast on both sides of the streets is only as jarring as you make it to be, or notice at all.

Standing in the middle of Sinan Lu (思南路), facing Fuxing West Lu (复兴西路), one noted commercial development and ostentatious luxury stood face to face with the ghosts of past riches. Yet history and the present are embodied by the tradition of old European-styled villas. Only, the villas on the right had its layout redesigned, foundations tilted sideways, its innards replaced with modern amenities (lifts!), and the courtyards beautified with plenty of commercial landscaping. On the other side of the street stood the original structures, tired, broken down and empty of its occupants.

Aesthetically, Sinan Mansions*, as the new development is called, was … underwhelming. Nevertheless, the swath of new restaurants, lounges and luxury hotels are expected to be warmly received by crowds who would at least appreciate this interpretation of heritage preservation while sipping RMB 100 (USD 15) cocktails and dining in the RMB 40,000 (USD 5970) a night luxury villas. 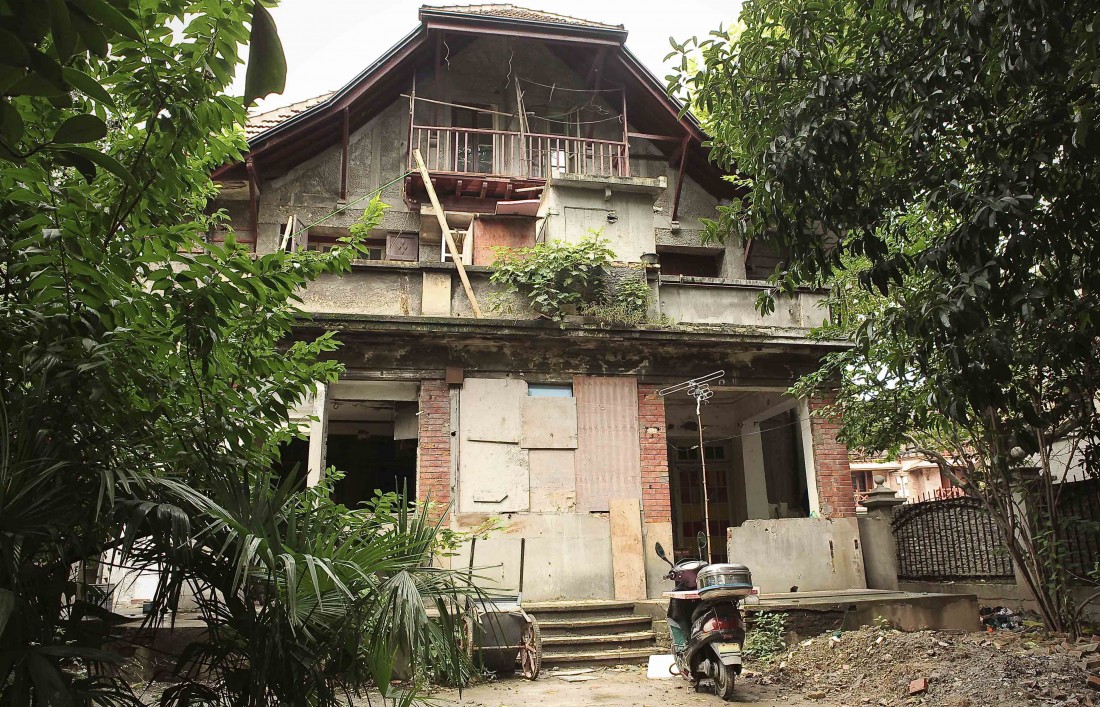 Distracted by the shiny property development, many passers-by rarely give a second glance to the old villas across the street. After all, they were mostly obscured by walls and tall trees, the way the original owners, wealthy Chinese families and European expats, had intended for privacy. One villa in particular served as an outpost for Kuomintang spies overlooking Zhou Enlai’s residence (73 Sinan Lu), which now serves as a museum.

The collection of old villas (No. 52, 54, 56, Sinan Lu etc) had served (and continue to) as de-facto working spaces and dormitories for many workers building Sinan Mansions across the street. In the courtyards stood large sawing contraptions, loose metal rods, brick and stone and rusting motor engines. Amidst the green foliage, it looked like a scrap yard jungle. 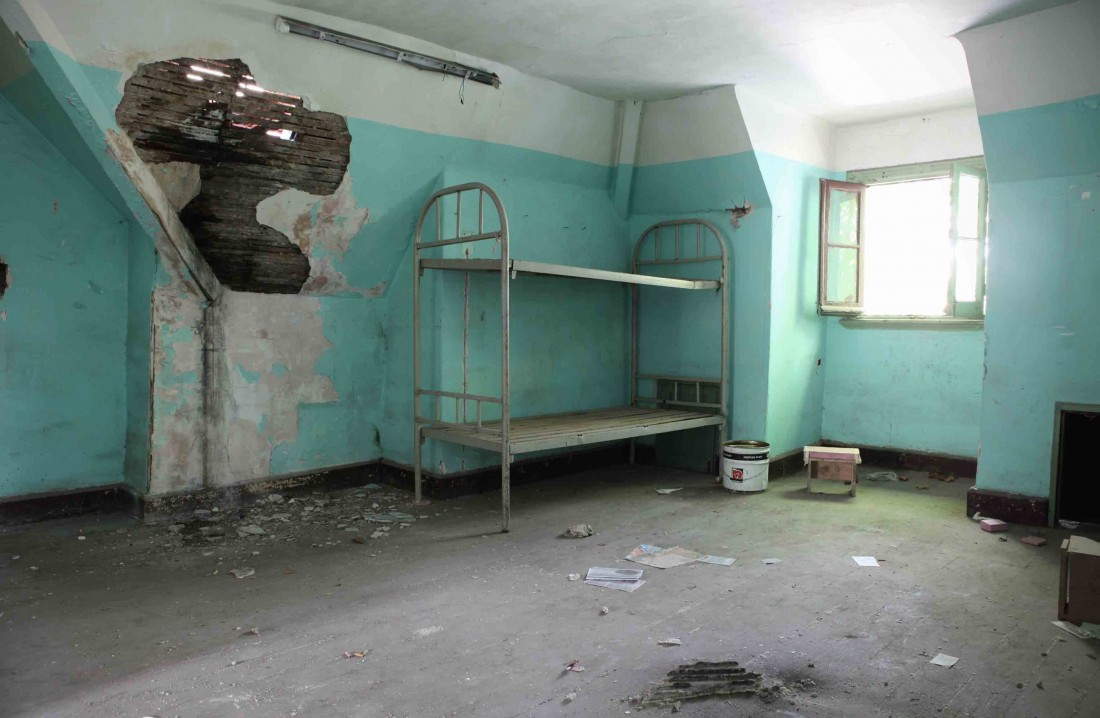 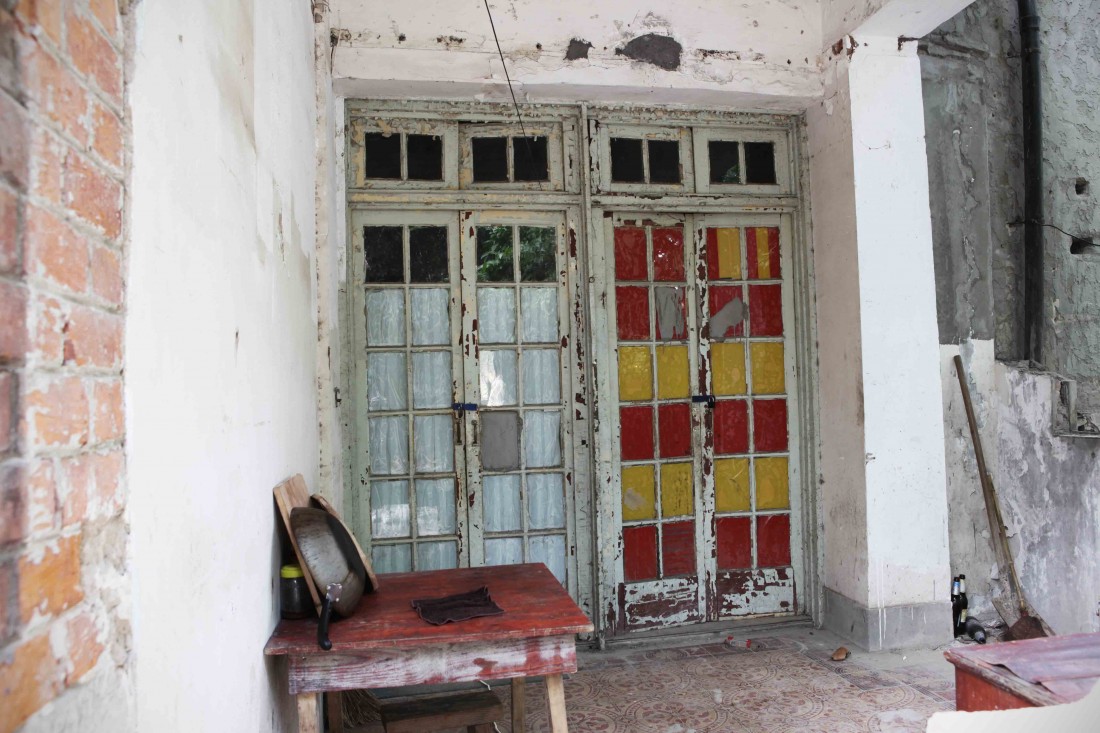 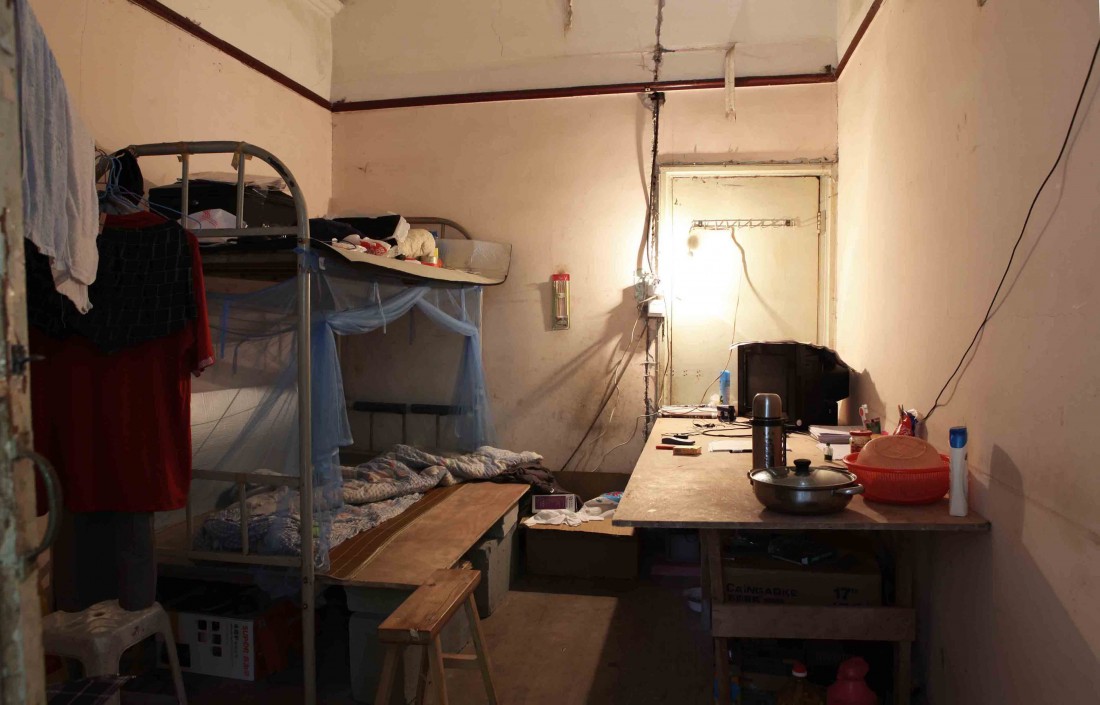 Wandering through the old houses, you’d see stacks of bunk bed structures dismantled and stacked against the walls. Abandoned loose shoes, chopsticks, broken furniture and the occasional underwear were scattered around, denoting signs of past daily lives. The house had been slowly decaying over the years, evidenced by the rotting wood in doors, ceilings, walls and floor, as well as the copious amount of dust wedged in every crevice.

One particular villa which was kept in better shape was filled with occupants, seen by some bolted doors, and unlocked rooms that were outfitted with bunk beds, basic kitchen ware and calendars on the walls. 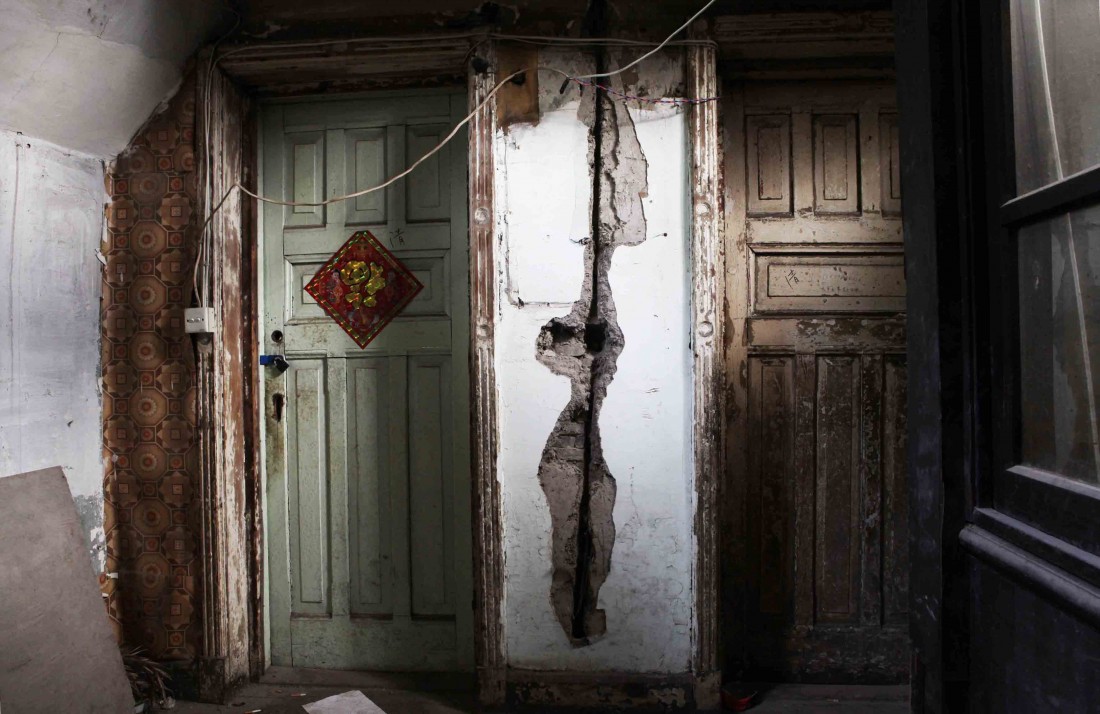 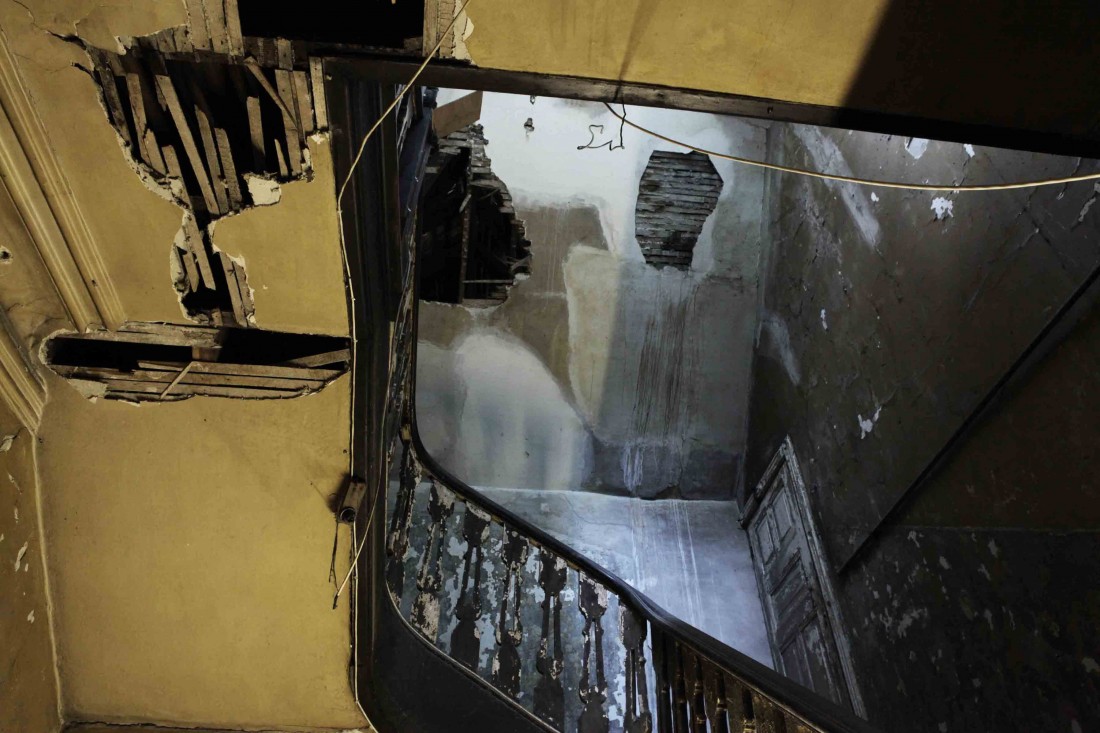 I chanced upon a danwei (单位/work unit) meeting underway, where a female manager was briefing a group of workers on how to behave as Sinan Mansions opened up to the public.

“Whether you are cleaning or fixing things, make sure to keep your clothes on and look neat. There will be guests walking around, our leaders and some from abroad, so be civilized and do not spit or sleep on the floors!” Everyone laughed nervously.

When they found me skulking nearby with a camera and tripod, a worker, at the insistence of his manager, said politely to me, “We’re having a meeting now, you cannot be here.” As he walked me out, I apologized for interrupting. Pausing, he then whispered, “We finish at about 3pm, you can come back later.” 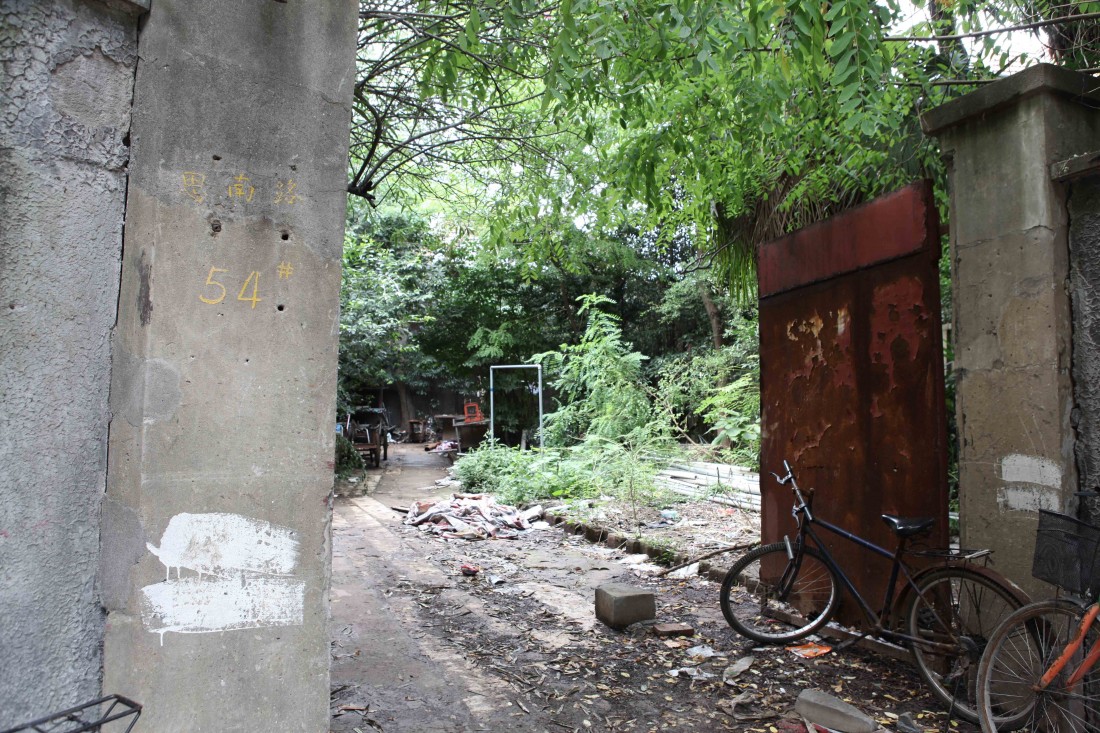 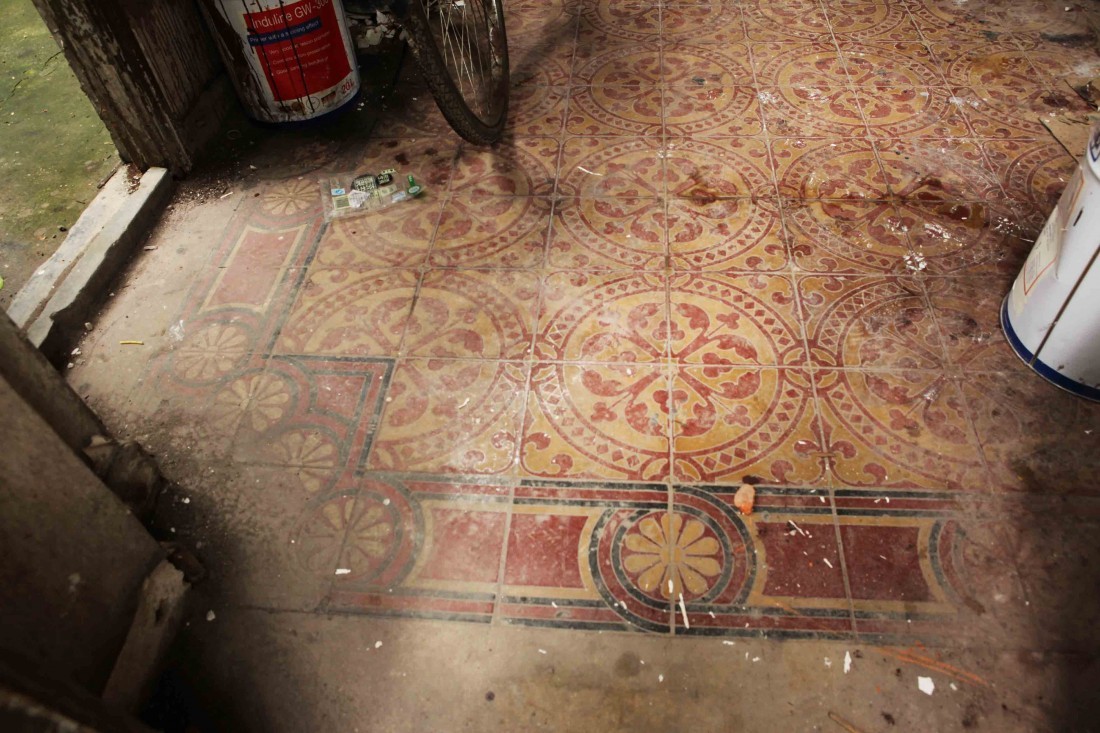 *Christopher St. Cavish wrote a good overview of what the Sinan Mansions development is all about and explains how you can exercise your wealth  in the various F&B and luxury hotel establishments. Elaine Chow penned a very personal and heartfelt account of family history tied to that part of the neighborhood.