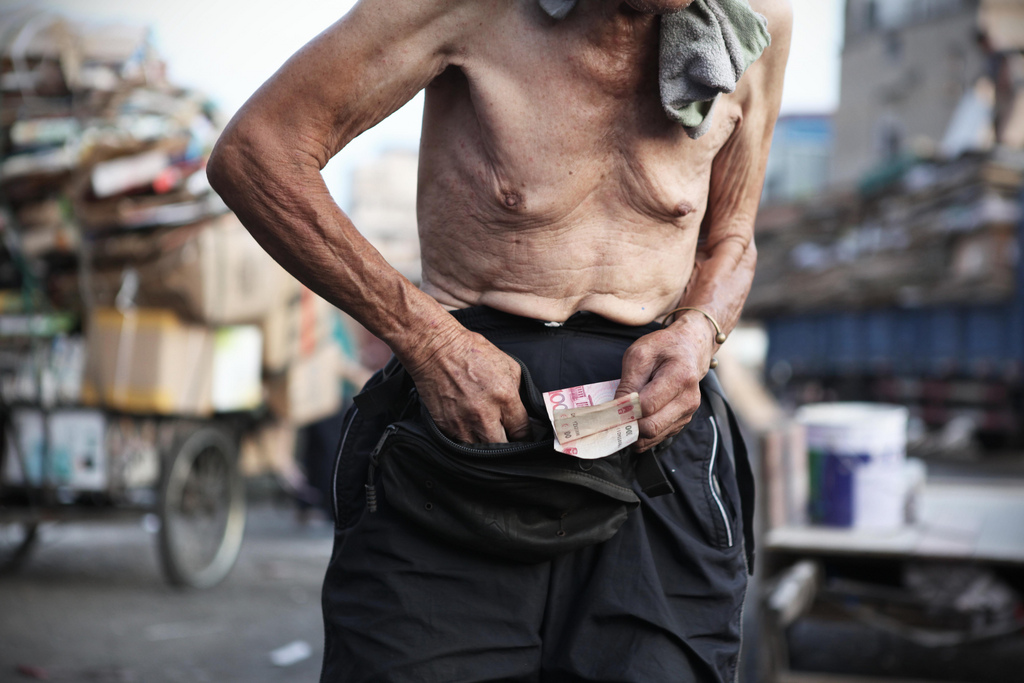 In the afternoon that I have been hanging out at a scrapyard along Huoshan Lu (霍山路), I noticed an old man shuffling quietly through with a small bag in hand. He was shirtless given the sweltering heat, and his age showed through his liver-spotted and saggy skin which hung loosely on his person.

I followed him across to another scrapyard by Liaoyang Lu (辽阳路) and discovered him tidying up a large tarpaulin bag filled with plastic bottles. He had an odd movement about him. Upon closer examination, I noticed his shaking hands.

He had Parkinson’s disease.

His right hand shaking more than his left, he stared at his wares and mentally calculated its costs. I thought it made sense he collected plastic bottles, it’s light and portable, but you only earn about 0.20 cents to one jin (斤) which is about 500 grams.

I was standing amidst a group of men in charge of collecting recycled goods – wood, steel, plastic, rubber, junk. They bought scrap from individuals to sell in bulk to recycling plants.

A young man sauntered over to assess the voluminous heap of plastic. A transaction was made with a modest sum exchanged. I could not help noticing the old man’s shaking hands while he waited for his payment. I wondered if he was being medically treated.

The old man then shuffled off counting his money, dragging his dust encrusted feet and slippers.

“He’s about 60, maybe 70.” One of the managers said in response to my question. “We try to give him a fair deal each time.” A look of pity flashed across his eyes as quickly as it disappeared. He then distractedly turned back to jousting with his buddies.

A month ago, I received a call from Deborah Meijburg from Five Spices, a Dutch creative agency that applies a spectrum of disciplines including concept, 3D design, graphic…