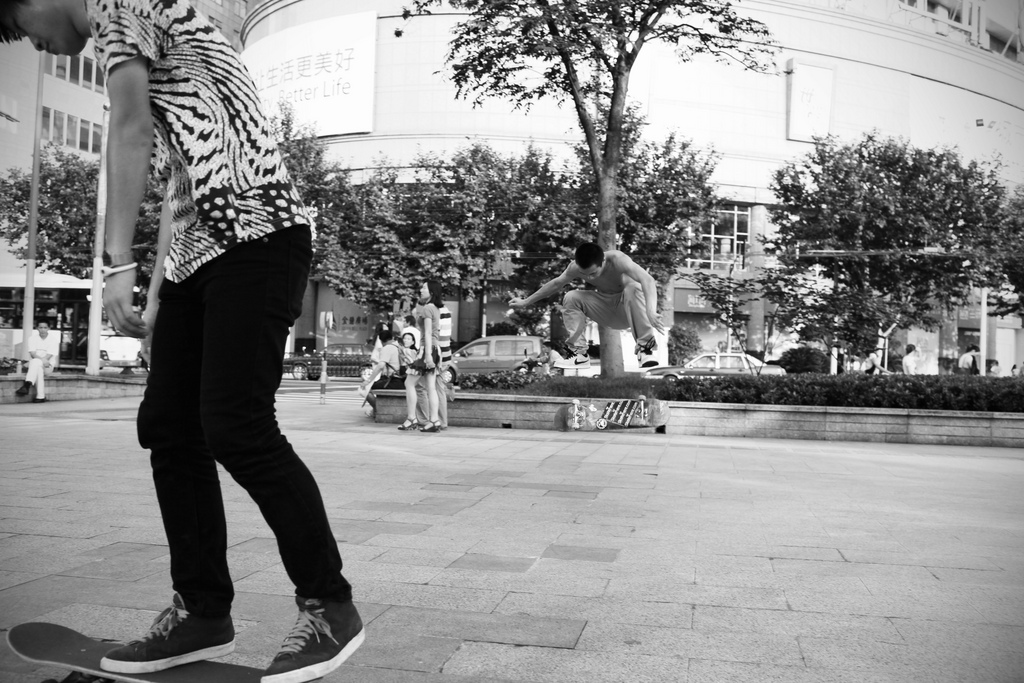 I was “chasing” 4 o’clock shadows at the intersection of 金陵东路 (Jinling Dong Lu) and 西藏南路 (Xizhang Nan Lu) when I heard a loud whoops and whooshes of skater wheels on concrete coming from a distance.

In a large square behind the Shanghai Concert Hall (Update: I have been kindly informed that the area is also called The Love Park (LP among sb folks)), a group of sweaty young men were practicing a variety of maneuvers with utmost seriousness. It was a mixed crowd of mostly amateurs diligently mastering the basics: the “Ollie”, “kickturns”, “board slides”, “kickflips” before graduating to more intermediate moves. (for an always educational list of skateboarding terms, refer here)

They checked in with each other’s progress. “你的Ollie 还这么样吗?” (“How is your Ollie coming along?”) (“Yea, still getting there.” “Which maneuver are you up to now?”)

From a distance, a tall, skinny boy in a purple tee with zig-zags and black skinny jeans was riding out momentum to “air” (ride all 4 wheels in the air) over a set of steps while tapping the board into a full rotation. The result sent him into a full-bodied sprawl on the ground. Sensing no bodily damage, he was up and about repeating the maneuver.

At one point, as I began photographing them, a topless and tough-looking boy eyed me from a distance. “If you want to shoot us, don’t make us look bad.” I was a little perplexed by this and asked what he meant by that. He shrugged and said, “Nothing, as long as you think there’s no problem, we’re cool.” Losing all interest in my presence, he went back to his skateboard.

I sat on the sides and began observing the crowd’s reaction to them. Some curious passers-by would slow down, others simply cut right through their activity without a blink of an eye. The occasional young lass in a short skirt always created a pause in all skateboarding activity for an appreciative gaze.

Children were the most intrigued. At one point, a mother tugged at her son who stood riveted by the skaterboys, “Look at them.” She sneered. “If you don’t do well in school, this is what happens to you.” The young child grinned to himself at the possibility, probably not the best parenting move.

It made me think of William Blake’s great quote, “If the doors of perception were cleansed, everything would appear as it is – infinite”. While we were in a public space, the typical passer-by knew little about the skaterboys and what they were about.

Maybe it was because they looked a little intimidating with their tattoos and body scars from too much practice, but listening to the skateboarders discuss at length techniques and paraphernalia with the seriousness of an engineer, it’s hard to be negative.

Just then, the sound of flesh and bones connecting, once again, with concrete caught my attention. I winced. A young amateur sitting next to me stared at the boy in question dust himself off and said to no one in particular, “Man, I wish I could do that.”

And then the sun came out to play

This past weekend, the sun came out in its full glory, accompanied by clear blue skies and thin wisps of clouds. For weeks, Shanghai endured a perpetual haze,…