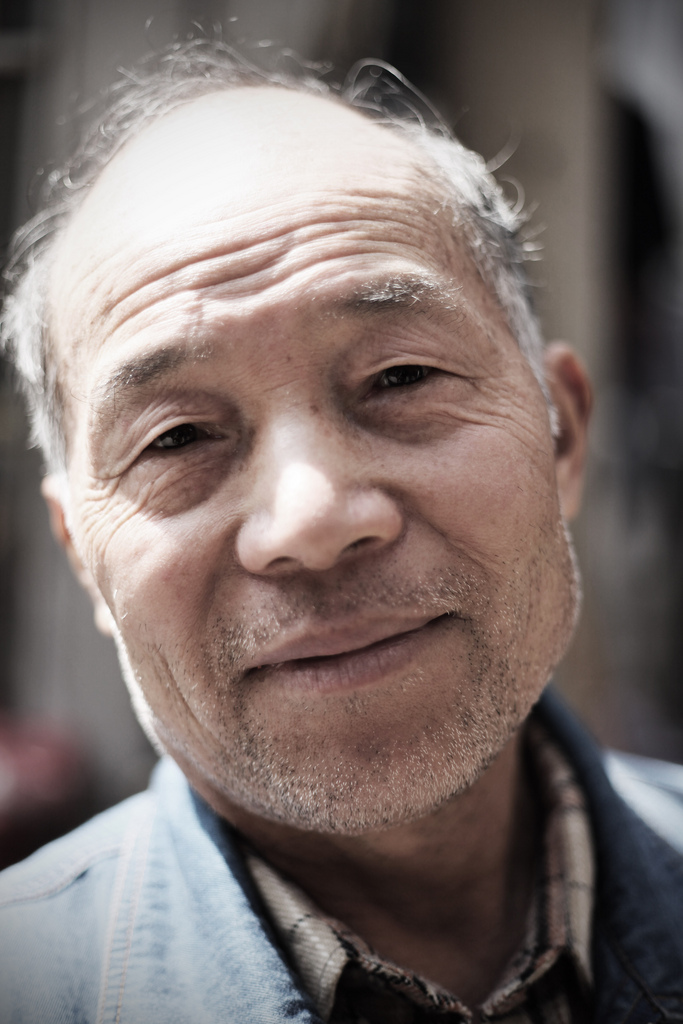 On a balmy spring day, I had ducked in a narrow corridor to get away from the frantic market activity along the stretch of Anguo Lu (安国路), where the street market bustled with clucking chickens, flopping fish and a rainbow of vegetables and fruits.

I found myself in a compound with squat two-storey apartments. It was a mix of communal housing from the 60s and modest shikumen from the early 30s – non-descript concrete intermingled with old wood.

What struck me most was how neat and orderly everything was. Burgeoning blooms rested in small garden patches that lined a courtyard devoid of clutter and decorated with warm, red windows. What the space lacked in interesting architecture, it made up with a quiet and homey space that was bathed in sunlight.

I struck up conversation with two older men which naturally attracted more people. House-proud, the first gent said he had lived here his whole life, “giving” his apartment to the government after 1949, and reclaiming it in the 1980s.

When I complimented on the state of their residence, they beamed. The second gent pointed out, “We make it a point to be civilized (文明) and clean up after ourselves.” Furrowing his brow, he lowered his voice, “Not like the waidiren (外地人) (or out of state residents) who now dominate the houses across the street. The houses are old and have grown messy and dirty and they don’t take care of it.”

Others in the group nodded. A middle-aged woman lamented as she sorted her vegetables, “When more outsiders started moving into the neighborhood, locals would move out. Or maybe the Shanghainese could afford better housing elsewhere, and start renting their old homes to migrants.” She seemed confused about who to blame, then quickly added, “We renovate and upkeep our houses. Whereas they (outsiders) can be so uncivilized and dirty, destroying our surroundings.”

An old man tottered by and offered his two-cents worth, “Even the Shanghainese living opposite don’t like those outsiders.”

The first man jumped in, “If we can help it, we discourage landlords around here not to rent to outsiders. We prefer local Shanghainese.”

He then summed it up for me, “That street (Anguo Lu) is like a river that separates Hong Kong Island and Kowloon/New Territories.” Hong Kong Island is where businesses thrived and living standards are high, compared to New Territories which still has vast tracks of rural land. “We’re all the same city yet different.”

I didn’t respond, only smiled distractedly. I knew a few residents across the street, including a fish monger, a vegetable hawker and a store keeper. Like almost all the street hawkers in the vicinity, nobody was from Shanghai.

When locals refer to out of state residents, or waidiren (外地人), with such distaste, they usually refer to working migrants or labor from poorer neighboring regions. They could have lived here for years and be a permanent blind spot to society. Accustomed to harsh conditions, these migrants take on jobs that locals are less willing to carry out. They tend to be a little rough round the edges given their poorer living conditions. I’ve witnessed rather appalling behavior of construction workers near their living quarters. Enough said.

Of course, there are many wealthier waidiren, like my Wenzhou landlord who owns multiple properties across Shanghai. Or my work colleagues from Zhejiang, Guangzhou and Wuhan, who have called the city home since their university days. They refer themselves to “New Shanghainese” (新上海人). Locals tend to have mixed reactions to them, focusing more on the fact that they no longer feel they owned the city, than how much the city has thrived as a result of local migration.

I recalled a conversation with the fish monger from Jiangxi. In between naps in a plastic tub meant for containing fish, she told me that she felt sorry for many Shanghainese trying to afford property in the city.

“With the money a Shanghainese uses to buy a 90sqm apartment, I can afford a 3-storey house in my home village. At the end of the day, this is not our home and we will all go back. We may even have better lives in our villages.”

It was quite a revelation for me, putting the local vs. waidiren socio dynamic in new light.

I left the compound after being offered snacks and tea. Whatever the local residents’ opinions, I appreciated warm hospitality and a chatty demeanour.

As I stood in the middle of Anguo Lu, engulfed by bustling crowds, I looked east at the compound where the Shangahinese locals lived, then west-ward where many waidren lived.

There I was, in the cacophonous street that had turned into a gulf, a reminder of the persisting divide that plagues the city.

“Good day, sir! How are you doing today?” Stare. “Working hard, I see? I’m curious about this site, I hear it’s a former military barrack. Are you all…