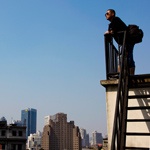 *A basic glossary on architectural terms is available here. All notes in parantheses are by the editor.

SA: Tell us a bit more about yourself. How long have you been shooting street photography in China, specifically tracing Shanghai’s old houses and lifestyle?

Initially, I had absolutely no interest in photography. From 1997-99, I used a 350k pixel digital camera to shoot Shanghai’s old buildings and streets, but didn’t continue thereafter. In the summer of 2007, I happened to photograph the demolition process of a hundred year old shikumen in a longtang on Dean Lane along the Suzhou river, and felt that this city was changing so fast. From then, I began to record Shanghai’s old architecture, longtang and its life/people that were about to disappear. I was born in Shanghai and was here till primary school. I later moved north to Anyang and Zhengzhou cities (in Henan province) where I studied high school, and returned to Shanghai for university. Hence, I have always felt the differences between China’s northern and southern, and inland and coastal cities.

SA: Can you share the appeal of this specific genre of photography?

Because I’m a professional designer, I am particularly interested in beautiful things including architecture. Also, I lived in a longtang as a kid (I still live in the same area, but my old family house has long disappeared) so I feel strongly about the city’s history. Most importantly, given the rapid pace of construction in Shanghai and all of China’s cities, I thought it was important that someone should record the short but glorious history of the city as each building, alley, block, road or district could become debris at any moment. (It is important) especially for residents who do not notice such things. Shanghai has so many more fascinating residential structures beyond the shikumens in Xitiandi (新天地) and Tianzifang (田子坊) but they have been demolished or will soon be, yet few Shanghainese have actually noticed and recorded them. As Mr Guo Bo* (A top architect in Japan, photographer, and son of Guo Moru) said, “It gradually became a mission of mine to capture, in my utmost capacity, the funeral pictures before they (Shanghai’s heritage buildings) die..”

* Editor’s note: Guo Bo (1920-) is the son of Guo Moruo (1892-1978) who was a prolific Chinese author, poet, historian, archaeologist, and member of the Communist Party.  Guo Bo participated in the design of Shanghai’s urban buildings and later became a famed photographer of heritage architecture.

(I’ll use) Dongjiadu is an example. Since 2008, large areas were and continue to be demolished. I’ve focused much of my time on documenting as much as possible, the disappearance of each building, then the streets and eventually the entire block. I’ve also done my best to record the inside of structures and search for unique angles that others miss. In the process, one can feel each lane and each longtang. Although the conditions are arduous, (I wanted to) capture the speed of change from a live, bustling market place to ruins of broken tiles, which is finally flattened into a parking lot. No need to ask how long (the process) has taken, or talk about which building was affected, many people do not even remember the names of the streets such as Luxi Road (芦席街), Merchant Hall Harbour Road (会馆码头街) (or Shipping Merchant Road), Zhuzuo Lane (猪作弄).

SA: There are many foreigners who are equally interested in shooting the same subjects. As a local and long-time Shanghai resident, do you view Shanghai differently or are there similarities?

Few people like to be tourists in their own cities. For example, I’ve never been to the Pearl Tower. Even fewer people would record their home surroundings. Hence, foreigners tend to be the ones photographing parts of Shanghai that Shanghainese and Chinese people tend to neglect. I think I carry a tourist’s curiosity when recording the city and reap bigger rewards. Also, being a local is convenient in gaining permission to enter people’s homes or construction sites. With regards to perspectives, foreigners mostly have a curiosity and sense of novelty when shooting Shanghai. For me, I tend to be drawn to architecture and the beauty of humanity, and remain curious about its history.

Safety is the most important thing when shooting in demolition sites or at night. A most memorable experience was when I was mistaken by people who called the police on me. But people have largely grown to accept (such behavior). People may even take the initiative to introduce the history, legends and stories. Often times, I am mistaken as a foreigner, not because I look like one, but because Chinese people often assume only foreigners would photograph such places.

SA: Do you have a favorite place in Shanghai after years of photography?

There was a Shanghainese-styled shikumen on Luxi Road in Dongjiadu, which was built in 1923. The carvings (on the house) may not be extravagant but were very beautiful and built by its owner, Old Mr Wang’s father who worked in a foreign firm (back in the day). Mr Wang himself graduated from St Johns University (one of the most prestigious universities in Shanghai from 1879-1951). In his twilight years, he lived in his ancestral home of a few square feet, until Christmas eve in 2009, when the cottage was completely demolished and Mr Wang still had not found another place to live.

SA: What camera do you use? Do you have a preference for film or digital?

SA: Are there any photographers that have stood out or influenced your work?

SA: You are an administrator of Shanghaimage.com, a site where photographers post and discuss their work on Shanghai’s old neighborhoods. Tell us more about it.

We all have a basic common interest and perspective, although everyone has different backgrounds, techniques and equipment. Hence, the resulting photographs vary significantly. Also, our group is small. There are so many photographers who shoot pretty girls, scenery or at most, (the overly touristy) Xintiandi (新天地), the Bund, Tianzifang (田子坊). Or perhaps there are photographers who share the same interests but are not interested in sharing and discussing their work on the internet.

SA: How do you think the next generation will view the history of Shanghai’s longtang and shikumen?

At the moment, it is mostly old people and out-of-state workers that live in the shikumens. The next generation of Shanghainese will not likely have any similar experience like that of their previous ancestors, so they will not have any childhood memories and feel of such life. They will probably learn about them in tourist destinations like Xintiandi or historical movies. For those still living in shikumens, many wish they can move into newer accommodations so they themselves have little desire to live in shikumens. Perhaps after the buildings are demolished, they will feel a little nostalgic. Nowadays, young people care mostly about real estate prices and the stockmarket, few pay much attention to Shanghai’s history and old architecture. Or at least, those that I have encountered.

SA: Do you plan to keep shooting Old Shanghai?

席子: 只要有体力，可以拍到只剩除新天地外的最后一座石库门 As long as I have the strength, I will keep shooting until there is only the shikumen in Xintiandi standing.

Yes, two blog post hugs from me in one day. Hopefully to make up for my absence for the last 2 weeks. Enjoy your weekend. The first photo captivated…