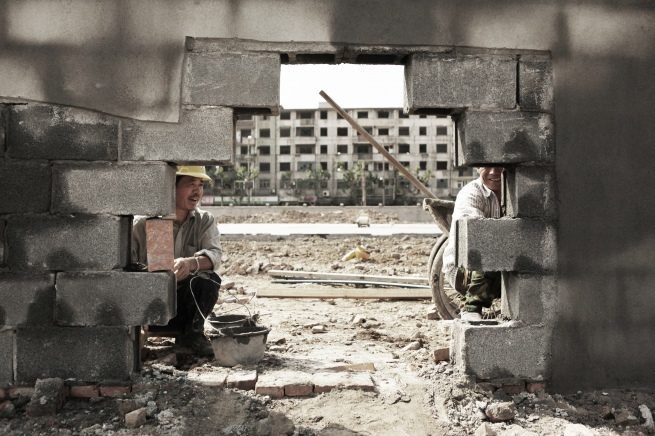 I stood completely disoriented in a vast track of demolished land running along Gongping Lu (公平路) and Tangshan Lu (唐山路).

I was retracing an old longtang neighborhood but found myself circling back to the same parking lot. It was common for flattened neighborhoods to be converted into parking spaces at RMB10 an hour, a temporary albeit profitable solution to utilize fallowed concrete spaces prior to actual construction   Shoddy looking walls were often erected around construction sites to contain the dust and from prying eyes.

The wall surrounding this plot of land was almost complete, save for a gaping hole in the north end.

There, I found some men coating the wall with a fresh slab of concrete. From Subei (苏北), short for northern Jiangsu, they often worked 7 days a week. “Otherwise, how do you get this?” a worker said to me with a glint in his eye, motioning money with his finger tips.

It turned out that their main jobs were to build temporary walls for construction sites. In fact, they were responsible for much of the walling of major sites in Hongkou for the past year.   Currently, they were preparing the site that will soon house one of many metro stops along Shanghai’s 12th subway line, steadily making the city’s subway system one of the largest in the world. I had earlier documented the demolition of another neighborhood for a separate Line 12 stop last year.

I squatted with the workers under the beating sun, watching them paint deft strokes of concrete while puffing away on cheap cigarettes. It was hard not to notice their leathery skins which were dark and shiny from hours under the sun. After sharing some waxberries (杨梅) I had on hand, I departed, leaving them to earn another day’s wages.